When you’re in a new relationship, you waste endless words telling your partner how much you looove him or her. After you’re married, the conversations shift to the things that really matter. Things like dinner.

That’s what one data scientist discovered about her own relationship, anyway. For a recent anniversary, Alice Zhao analyzed all the texts she and her husband had ever sent each other, from the first flirty days of dating to their current status as newlyweds. Here’s her interpretation of how her relationship changed, judging strictly from the ever-so-romantic world of text-message logs: 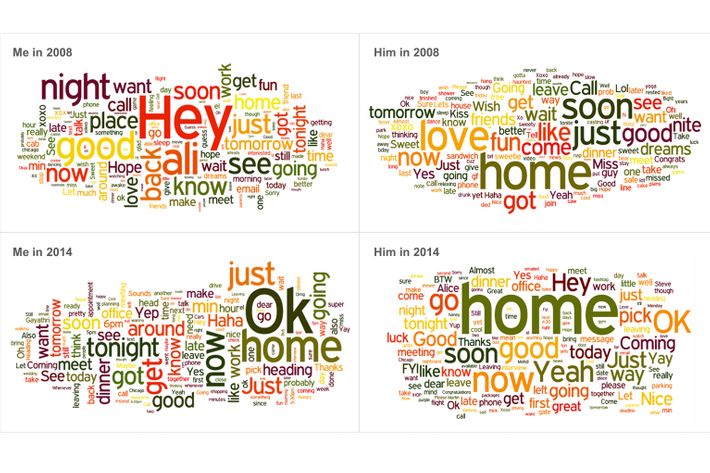 You no longer greet each other. Zhao found that while she and her husband were dating, she was more likely to include hey in her texts; now, her most-used word is ok. She writes, “I seem to have decided to no longer greet my husband, but instead agree with most of the things he texts me.” Married life: all about keeping the peace. Her husband, on the other hand, was and is a bit of a homebody; his most-used word in texts to her, in both their years of dating and marriage, is home. 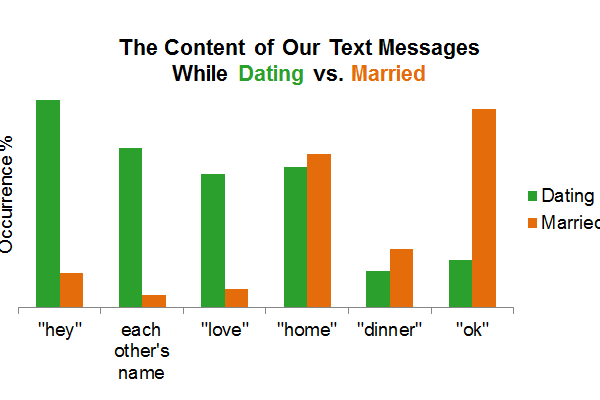 You use each others’ names less; you talk about dinner more. She was also curious about how often specific words appeared in their texts when they first started dating, compared to during married life. When she and her husband were dating, they used each others’ names more often; they also used the words hey and love more frequently. After they got married, the words home and dinner got the edge, and use of the word ok shot way up. She also noted that the context in which they used these words changed after marriage:

She reasons that this is because they now spend most of their time together, so text messages are mostly for confirming plans and working out logistics.

You don’t spend all night texting anymore. And why would you? If you’ve got something to say to your significant other during the wee hours, a nudge and a mumble will do, because they’re likely sharing the bed with you. Zhao found that when she and her husband were dating, they seemed to start thinking about each other around 3 p.m.; the texts started then and lasted as late as 3 a.m. Now, they’re most likely to text during the workday, which makes sense, because, again, most of the rest of the time they’re probably together. So marriage in text messages is kind of like marriage in real life: predictable, maybe. But in a nice way.

A Dash of Data