This is probably not something you can objectively quantify, but Mallory Ortberg might just be the most skilled spotter of jerks in the literary canon.

The co-founder of the Toast has her first book out next week — Texts From Jane Eyre (based on her Hairpin series), which imagines characters of classic literature communicating with cell phones. Stripped of their masterpiece dignity and library-copy musk, it’s amazingly easy to see what these people would actually be like: a bunch of weirdos, losers, needy douchebags, obnoxious strivers. But in Ortberg’s hands, they’re also delightful.

She spoke with the Cut about texting flakiness, which literary character the Toast would be, and reading.

What was your first experience reading the canon?
I read too many books to be able to talk about anything else as a kid. I spent the first 22 years of my life absorbing everything, like a big disgusting cell, and now I’m disgorging it with jokes added out into the world. That’s a really gross metaphor.

I grew up in a home where reading was a big deal. One year on the Fourth of July, my dad bet me $50 I couldn’t memorize the Declaration of Independence by the end of the day. I sat up in my parent’s bathroom, writing it over and over on construction paper. I was 16, I should have been outdoors with my friends eating hot dogs. But that sums it up: I want this to be something that belongs to me and I want money. I got that $50. I was proud of myself. I recited it at dinner. I regret nothing. I stayed indoors all day, locked in a bathroom, and it was worth it. 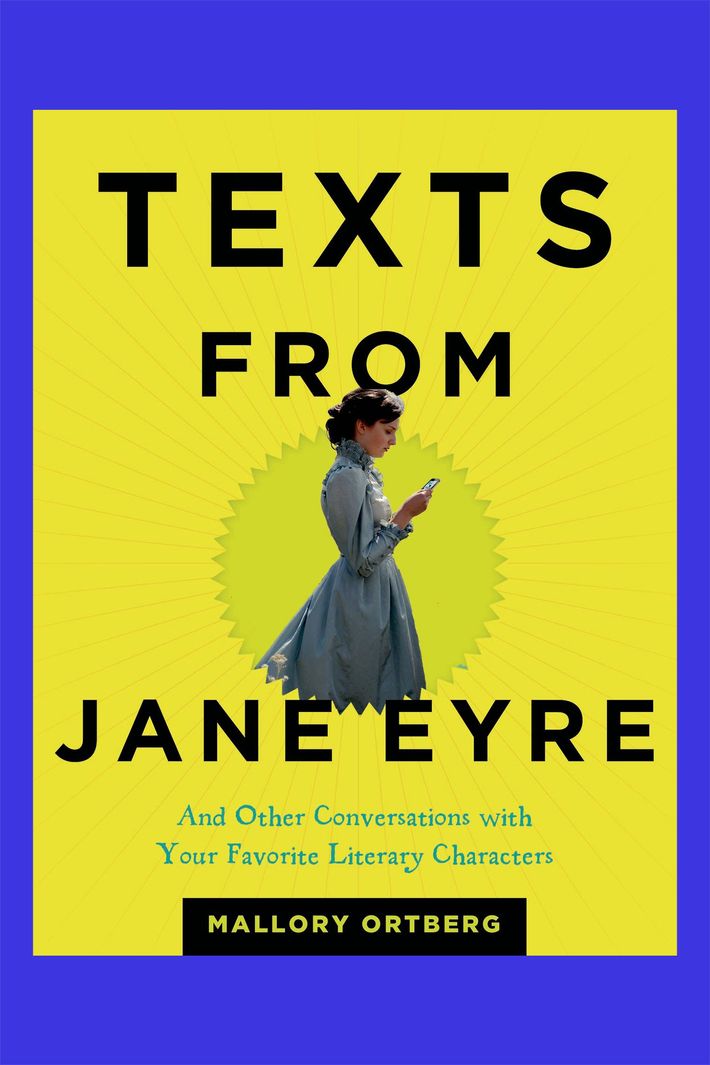 Tell me about the balance this book strikes between criticism of the canon and admiration.
It would be hard to write this book if there wasn’t love at the core of it. But it’s also really valuable to know; I’m glad I’ve read King Lear and not just so I could make jokes about birds but because it was worth it, reading King Lear.

There’s a sense the canon should be entirely dismissed or completely revered because it’s the canon and you can’t touch it and you can’t make fun of the things white men like, because it breaks their tiny, precious hearts. But it’s my favorite thing to do.

The Toast has that same sensibility — it’s assertive, but with silliness.
I feel like Tom Bombadil from Lord of the Rings. He lives alone in the woods and no one has any control over him. The things that frighten other characters and have power over them literally can’t harm him. He’s self-possessed. I feel like that’s what the Toast does; we’re always laughing and singing and running through the woods.

You studied English, so you also have an essay-writing relationship to these works. How is working with jokes different?
You could probably write an essay about each of these topics, but you can ask the same questions and make some of the same points through the oblique use of joking. I have a lot of faith in the power of joking to make something thoughtful.

You read these in high school and the big question you ask is, Is Hamlet mad? Another big question to ask is, Is Hamlet an asshole? It has searing questions like: Is it worth trying to live in the face of your own mortality? And these are great questions, but only Hamlet gets to ask them because he’s still getting his mom to make him dinner and being a dick to his girlfriend. He’s a moody bassist who lives in a basement and can’t get shit done. All this is so identifiable in a play about a fictional Danish prince.

Do you want to write another book?
I would love to do another book. I would like to write the light comic spinster novel, like I Capture the Castle with someone who doesn’t get married, that’s not a coming-of-age book. Like she’ll have a conversation with someone where she teaches them how to pretend to listen to men. But whether I have the intellectual fortitude to write a novel, as opposed to: I finished a joke, here it is … This could be my swan song.

What’s your relationship to texting?
In the hands of a passive-aggressive person who wants to abdicate responsibility for things, texting is a great tool. You can really go nuts.

Texts From Jane Eyre is out November 4.

Mallory Ortberg on the Great Jerks of Literature

seeing someone 14 mins ago
Help! Both Women I’m Seeing Want to Be Instagram Official You don’t have to “launch” a relationship if you don’t want to.
By Randa Sakallah
accidents Yesterday at 8:05 p.m.
Anne Heche in a Coma, Under DUI Investigation, Following Car Crash According to a representative, she has remained in a coma since shortly after the accident.
style Yesterday at 7:01 p.m.
Hey Fashion Friend: How Do I Wear Fashion Cargo Pants? We provide you with 13 non-ironic pairs to go with your tiny shirts.
ugh why Yesterday at 4:16 p.m.
Britney’s Lawyer Has Some Words for Kevin Federline “Britney Spears is a brilliantly talented, extremely hardworking icon … The same, unfortunately, cannot be said about Mr. Federline.”
sigh Yesterday at 4:00 p.m.
Male Actor Doesn’t See the Point of Intimacy Coordinators Emma Thompson and Kumail Nanjiani disagree.
5 questions with... Yesterday at 3:27 p.m.
Gugu Mbatha-Raw Takes on the Neo-Noir In Surface, she plays an amnesiac trying to uncover her truth.
wtf Yesterday at 2:42 p.m.
Watch Kathy Hilton Learn Lizzo Is Not Gabourey Sidibe It’s as cringe as it sounds.
panties we love Yesterday at 1:00 p.m.
Kim Kardashian on How She Made Her Skims Underwear A deep dive with Kardashian on what makes Skims panties so special. (Hint: It’s the fit.)
underneath your clothes Yesterday at 1:00 p.m.
The Best Backless Bras for Every Cup Size From plunging necklines to nipple covers and boob tape, there’s one for every outfit.
By Leora Herman
millie bobby brown Yesterday at 12:38 p.m.
Millie Bobby Brown Opens Up About ‘Unhealthy’ Relationship With Hunter Echo She says she felt “out of control and powerless” after the TikTok star claimed to have groomed her as a minor.
obsessive tester Yesterday at 11:06 a.m.
The Absolute Best Mascaras of All Time For every budget and need.
parenting Yesterday at 11:00 a.m.
My Queer Family vs. the Supreme Court If SCOTUS comes for marriage equality next, will I still be considered my son’s mother?
By Michelle Tea
allegations Yesterday at 10:21 a.m.
Unpacking the Allegations Against Ezra Miller Vermont police are unable to locate a woman and her three children who were living at Miller’s farm earlier this summer.
celebrity Yesterday at 8:47 a.m.
Olivia Wilde Didn’t Appreciate Being Served Custody Docs Onstage In new court docs, she said ex Jason Sudeikis “clearly intended to threaten me.”
my two cents Yesterday at 8:00 a.m.
‘I’m Good at Saving, But I’m Still Miserable’ Not to oversimplify matters, but what if you thought about money less?
By Charlotte Cowles
style Aug. 10, 2022
5 New York City Dance Companies, Brought Together The shows, which continue through Saturday, are free and open to the public.
power Aug. 10, 2022
Did Armie Hammer Really Think Voice Notes Were a Good Idea? In the trailer for House of Hammer, the actor shares a violent sexual fantasy in a voice note played by one of his exes.
recommendations Aug. 10, 2022
18 Best Butt Plugs You Can Buy Online According to experts.
okay?? Aug. 10, 2022
Oscar Isaac Is Still Struggling to Explain That Red-Carpet PDA Apparently he and Jessica Chastain are … like flatworms?
love and war Aug. 10, 2022
Tinder’s Fatphobia Problem The dating app’s hold on the culture began around the same time as the mainstream body-positive movement. So why hasn’t anything changed?
By Kelsey Miller
More Stories