Over 75,000 volunteers willingly turned over their Facebook status updates to scientists at the University of Pennsylvania’s World Well-Being Project (WWBP) — a research group including linguists, psychologists, and computer scientists — and created a virtual treasure trove of data, and the results are startling: For both men and women, use of first-person-singular pronouns — “I,” “me,” “my,” “mine” — declines with age, while at the same time, use of first-person-plural pronouns — “we,” “us,” “our,” “ours” — goes up. On the blog “Language Log,” linguist Mark Liberman has analyzed the WWBP data. 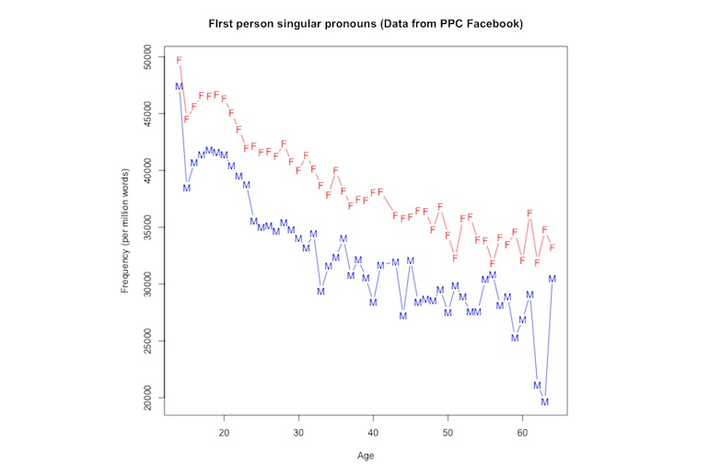 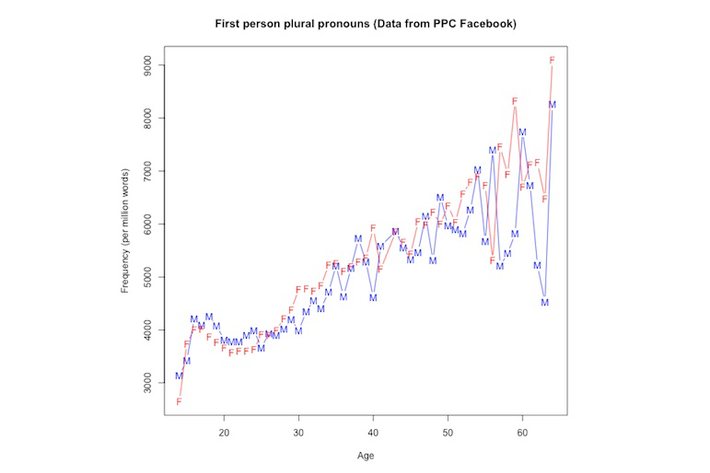 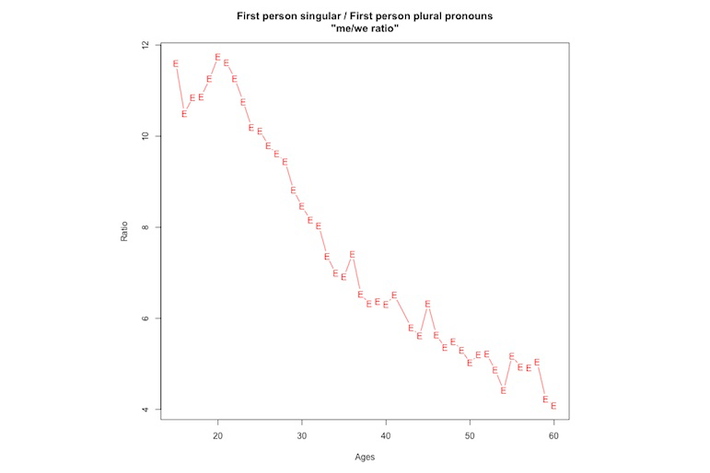 Some psychologists attribute this trend to a decline in self-centeredness that we expect as an effect of aging. “‘We’ words reflect at least two processes — a looking outside of oneself at others and also a greater sense of connections with others,” says James Pennebaker, social psychologist and author of The Secret Life of Pronouns: What Our Words Say About Us. “When we are in new situations and are trying to establish an identity, we tend to be more self-focused, which comes out through higher rates of ‘I’-words. Almost by definition, younger people are more attentive to their not fitting in and are looking more closely at their own thoughts and feeling.” But as people age, says Pennebaker, ”we become less concerned with our own shortcomings and can sit back and watch the world a bit more objectively.”

The new Facebook data isn’t the first to reflect this pattern. In 2003, Pennebaker and co-author Lori Stone looked at a compendium of text samples culled from interviews with over 3,000 volunteers ranging in age from eight to 85. They also found a progressive decline in first-person singular pronouns, and a corresponding increase in first-person-plural pronouns, over the course of the life span. This trend wasn’t unique to the twenty-first century, either: Pennebaker and Stone also analyzed a corpus of writing from ten well-known authors from the past 500 years. Six of the ten — including Wordsworth, George Eliot, and Yeats — also exhibited a decrease in relative use of the first-person singular over their lives; only one — Shakespeare — displayed a pattern in the opposite direction.

It’s possible, though, that the pattern doesn’t just reflect life-cycle changes, but generational shifts. “In a study of people at one time, it is impossible to separate age and birth year,” observes Jean Twenge, author of Generation Me. In other words, the social and cultural factors related to the year in which someone is born may be more important than age in determining their outlook (and their speech). In an often-cited Google Books text analysis of over 760,000 American books, Twenge found that incidence of first-person-plural pronouns declined by 10 percent between 1960 and 2008, while first-person-singular pronouns rose by 42 percent over the same period.

What explains the me-centered attitudes of the young? Experts warn against jumping to conclusions about the narcissism of the young. “Narcissism is a complex and contradictory term/concept/diagnosis that loses a lot in being extracted from specific contexts,” says Elizabeth Lunbeck, author of The Americanization of Narcissism. Linguist Ben Zimmer doesn’t see the new data as an indictment of millennials, either. For twentysomethings, says Zimmer, “Their frames of reference have more to do with themselves as individuals, and later on those frames expand to include spouses and children.” Life changes, as much or more than attitude changes, are likely to affect diction. “Starting a family also licenses a person to speak on behalf of the family unit. In a Facebook post of someone who is married, and especially of someone married with kids, the use of ‘we’ is implicitly understood to encompass the nuclear family in one shared ‘voice.’”

Another startling trend Liberman notes is that men write “he” more often than “she” (70 percent of the time), though women use masculine and feminine pronouns evenly. 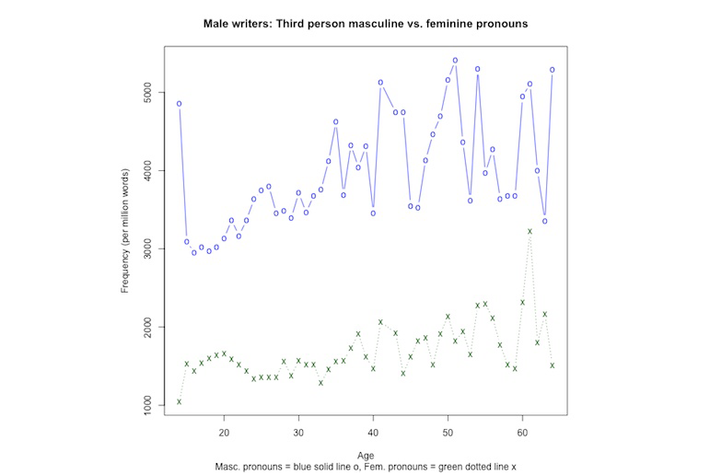 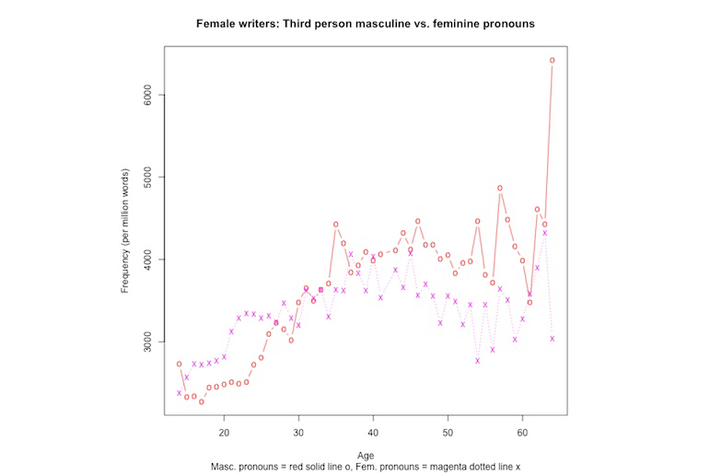 This “perhaps stems from the fact that men tend to have more male friends, while females tend to have a mix of both male and female friends,” says Lyle Ungar, one of the researchers at the World Well-Being Project.

“That the effects are so consistent over time suggests that there hasn’t been a deep-seated cultural shift in genderized language over the last 40 years,” says Pennebaker. “One argument is that men simply write and perhaps think less about women.”

This article originally appeared in The New Republic, where Alice Robb is a staff writer. Follow her on Twitter: @alicelrobb.

People Use ‘I’ and ‘Me’ Less As They Get Older

holiday gifts 29 mins ago
46 Christmas Gifts for Any Kind of Mom Whether she’s into cooking, skin care, gardening, or relaxing.
By the Cut
gender reveals 11:01 a.m.
Another Gender Reveal Ends in Environmental Disaster A couple in Brazil may have contaminated one town’s water source by dyeing a 60-foot waterfall blue.
gone sale-ing 10:02 a.m.
Saks’ Friends and Family Sale Will Make You Look Forward to Winter Puffer coats, boots, and knitwear, all on sale.
cut chat 10:00 a.m.
Every Thought We Had Watching Don’t Worry Darling For starters, it was definitely a movie.
how i get it done 10:00 a.m.
How Manicurist Jin Soon Choi Gets It Done During Fashion Week “If one hour before the show we still have models to do, my heart starts pounding. I want everything done without any delay or drama.”
By Danya Issawi
dream date 9:00 a.m.
A Hot Time With Harris Dickinson The Triangle of Sadness star reimagines what it means to be a modern man between sauna steams.
By Hanna Hanra
encounter 8:00 a.m.
17 Seconds With a Spotted Lanternfly Face-to-face with the stylish invasive species. So do I smoosh it or not?
By Matthew Schneier
at home in asian america 8:00 a.m.
For Domestic Workers, the Asian Class Divide Begins at Home Five nannies from the Philippines, Nepal, and China open up about what it’s like to work for their Asian American employers.
By Arya Sundaram
ambition 7:00 a.m.
Even Kelly Ripa Has to Deal With Sexist Bulls- - - at Work As the Live! host writes in her new collection of essays, seniority is a “masculine word.”
crime Yesterday at 5:19 p.m.
A Train Hit a Police Car With a Woman Handcuffed Inside She survived, though her attorney wonders why Colorado officers left their SUV parked directly on the tracks.
mfw spring 2023 Yesterday at 5:19 p.m.
The Best Street Style at Milan Fashion Week Chic looks from this fashionable city.
royals Yesterday at 4:43 p.m.
The Palace Is Reportedly Panicking About The Crown Again Royals are concerned the upcoming season will damage King Charles’s reputation.
all in the family Yesterday at 3:33 p.m.
Untangling the Secrets of a Teenage Mother We think of our parents as known quantities. But as Salon editor-in-chief Erin Keane writes in her memoir, Runaway, we rarely know the whole story.
mental health Yesterday at 3:15 p.m.
Megan Thee Stallion Wants to Help Hotties Get Therapy “Bad Bitches have bad days too.”
culture Yesterday at 11:57 a.m.
Why Is Hollywood Still So Obsessed With The Stepford Wives? Don’t Worry Darling wears its references to the cult classic on its sleeve.
review Yesterday at 11:52 a.m.
Does a New Designer Mean a New Direction? Not always. A mixed review of the debuts in Milan.
By Cathy Horyn
how i get it done Yesterday at 10:00 a.m.
How Über-Publicist Gia Kuan Gets It Done During Fashion Week “People would be shocked. It takes me maybe three minutes to deal with my makeup, do my hair, and get out the door.”
By Sangeeta Singh-Kurtz
celebrity babies Yesterday at 10:00 a.m.
Another Baldwin Has Arrived Hilaria announced the arrival of the couple’s seventh child.
divorce rumors Yesterday at 9:57 a.m.
Gisele Bündchen Isn’t Thrilled With Tom Brady’s Decision to Un-Retire She appears to have skipped his first home game of the season.
bffs Yesterday at 9:00 a.m.
Can a Childhood Friendship Really Last a Lifetime? In Best of Friends, novelist Kamila Shamsie attempts to find out.
More Stories