Some things become incredibly obvious once they’ve been pointed out to you, and this is one of them: Throughout the 20th century, swimsuits for both men and women got smaller, exposing more and more skin to the sun. Meanwhile, the incidences of melanoma grew. Could one thing have led to the other? That’s what researchers from New York University’s Langone Medical Center argue in a new paper, in which they make the case that we are overlooking the role of culture when it comes to sun protection.

It’s not like they’re saying that swimsuit fashion trends are the only or even the major contributor to the rise of melanoma, the deadliest form of skin cancer. Doctors are getting better at detecting the disease in its earliest stages, and patients themselves are more aware of the signs of skin cancer, but the NYU researchers had a hunch that wasn’t the whole story.

After studying old department store clothing catalogues, the researchers used the “rule of nines” — a standardized system used to measure the percentage of body surface potentially affected by the sun — to gauge sun exposure. They then charted those figures against the rate of melanoma diagnoses through the 20th century: 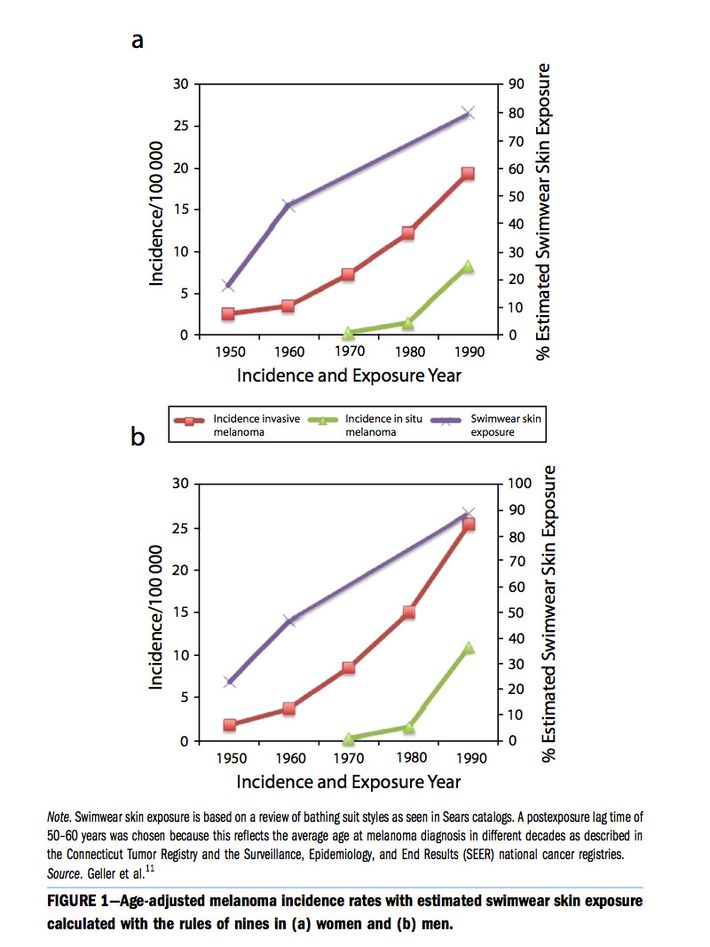 Here’s a quick look at the evolution in swimwear in the U.S.— from old-timey swim costumes to the bikinis and swim trunks we’re familiar with today— plus the authors’ notes on the estimated percentages of skin exposure, as provided by the university (click the images to enlarge):