“I get hate mail addressed to ‘Katha Pollitt, Abortion Writer,’” Katha Pollitt told me. “And I’m thinking, Oh, come on, there’s my poetry, I do book reviews …” Yet abortion is a subject Pollitt has returned to repeatedly — and this fall she takes it up again in her first full volume on the issue, Pro: Reclaiming Abortion Rights.

A feminist critic and Nation essayist, Pollitt argues that abortion benefits women, families, and society. “We should accept that it’s good for everyone if women have only the children they want and can raise well,” she writes, which is both obvious and worth repeating in a climate that’s openly hostile to women’s lives, safety, and ambitions. That critics have called Pro “radical,” “explosive,” and “controversial” speaks to the ways the pro-choice community has lost control of the conversation. Pollitt says she wrote the book for the “muddled middle,” those who are uncomfortable with abortion while not entirely pro-life — but it’s important reading if you’re a believer in abortion without apology, too. Blending statistics, history, and stories of real women along with her signature wit, Pollitt is an excellent guide to the debate’s most important questions.

The Cut spoke to Pollitt over the phone about bringing women back to the center of the conversation, and why the pro-choice movement needs to change.

You’ve written about reproductive rights for a long time. Was there something in particular that compelled you to write Pro?
Well, yeah, just open the newspaper. Things have reached a really serious pass with both abortion rights and abortion access.

My Year As an Abortion Doula

In the introduction, you wrote that knowing about your mother’s illegal abortion might have helped you. What do you mean?
I think that there is so much stigma and shame around abortion that people don’t know that they know people who’ve had an abortion. They don’t see that woman in her full complexity. To a lot of people, it’s like, She did something bad; now she has to have an abortion. Even if you’re in favor of abortion being legal, you may still think negatively of the women getting them. Not only was it my mother who had an illegal abortion, my great grandmother had one in Russia after having eight children. The women who have abortions are ordinary women.

You address the inadequacy of polling and how anti-abortion polling results don’t always come out in voting practices. Can you explain what you’re seeing?
Most polling questions are much too crude to get at what people really think, much less what they feel. The anti-choice movement has political power and rhetorical power in excess of its actual numbers. We think half the country is pro-life and half the country is pro-choice, but that’s not really true. Less than a quarter of the country wants to fully ban abortion.

But people give the answer that they think marks them as a good person. Once I got a telephone call for a poll and the person asked how often I exercise. I said, “Oh, three times a week.” I never exercise! Three times a year is more accurate. I just didn’t want this stranger on the phone to judge me. The closer you get to anything having to do with sex, the more people give answers to conform with what they think they should say. Polls also fail to present people with concrete situations.

It seems like so many fanatic anti-choicers don’t even have an answer to the question “Why do you think women get abortions?”
Yeah, exactly. Another thing people don’t consider is if you have these “good” abortions and “bad” abortions, how do you imagine your preferences will be enacted in laws? Is the woman supposed to go before a judge, or bring back the pre Roe hospital committees, which were notoriously unfair, cruel, and prejudiced in every way? Even things that seem simple, like allowing for abortion if the mother’s health is at risk, are really not. Carrying a pregnancy to term is way more dangerous than getting an abortion, so in that sense, the mother’s health is always at risk. People love the rape exception, but most rapes go unreported, so who’s going to determine if a woman’s pregnancy is due to rape?

How do you think shifting the language we use will impact the debate?
Well, the other side certainly thinks a lot about their language. “Partial-birth abortion,” that was brilliant. “Pro-life,” who doesn’t want to be pro-life? If we can remind people that 90 percent of abortions happen in the first trimester, and that most of those are on embryos, it makes it sound a little different. “The embryo’s right to life” and “the fertilized egg’s right to life” don’t have the same ring. You want to say the fertilized egg is the equivalent of a woman? Oh, please.

Was there anything that surprised you in exploring the pro-life movement?
One thing is the shocking indifference of anti-choicers to anything that harms a pregnancy that isn’t the woman’s will. They don’t care about pollution, poverty. If it’s some social cause outside of you, they don’t care. 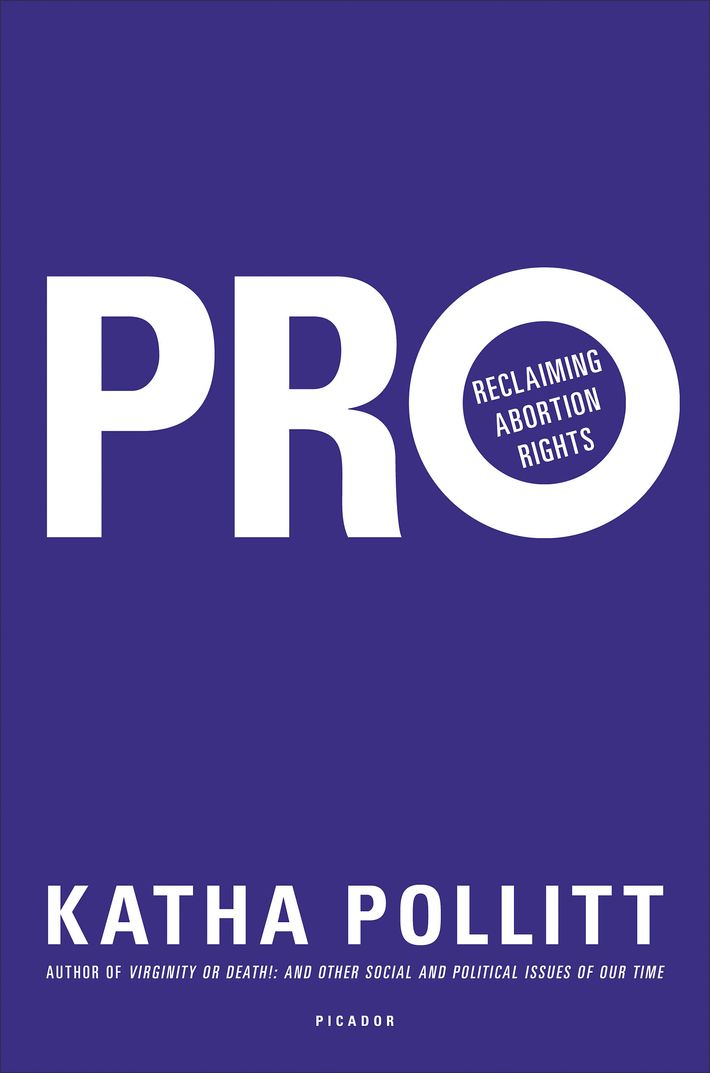 In Pro you take on the religious right, which has grown considerably since you started writing about abortion. How have you seen that movement change?
When abortion was discussed in the ‘60s, many, many denominations came out in favor of legal abortions. One of them was the Southern Baptists. Now they’re even turning against birth control, or “baby pesticide” as they call it. That tells you that there aren’t immutable laws in these religions, but that religion is being used for certain social ends.

I was really interested in the way you connected current constructions of DNA to historical notions of ensoulment. It seems that fetal viability will likely go backward as medical technology improves. How do we reckon with that?
It’s an important question; at 24, 25 weeks, the possibility of survival is there. Where I would take that is by acknowledging that there are these situations we’re becoming more uncomfortable with, so let’s try to have there be fewer and fewer of them. We know how to do that. If abortion is affordable, accessible, and unhampered by restrictions, that’ll help a lot.

How would you like to see the pro-choice movement’s dialogue about abortion change?
We have to openly talk about sex. The whole “if you don’t want a baby don’t have sex” [idea] is ridiculous. We have to speak more about what makes a good and happy life. Most people want to have a sex life. Most women want to have children, but they want to have them when they’re in a good position and they can take care of them well. They should be assisted in that goal.

The pro-choice movement has become too defensive. When you say that abortion is an agonizingly difficult decision, what you’re really saying is that motherhood is the default position for women and that she needs to be in a terribly serious situation to decline that opportunity, and all that just because a stray sperm gets into her womb.

But how can we acknowledge that for many women it is an agonizing decision without falling prey to the “good” vs. “bad” abortion discussion?
It’s important to discuss experience when it comes to broadening people’s perspectives on why women have abortions and what goes into that decision. But, when it comes to what the law should be, the complicated feelings surrounding abortion shouldn’t play a role. Look, divorce makes a lot of people really unhappy. It has socially positive and socially negative effects, a lot of people struggle with their divorce for the rest of their lives, but we would never try to outlaw divorce because people feel all sorts of things when they go through with it.

Finally, how do you imagine mobilizing the pro-choice movement in a similar way?
We’re beginning to see the next step already thanks to much younger women. Women in their 20s and earlier 30s are more open, militant, and creative. A lot of people believe having an abortion is really dangerous and painful; I thought it was really powerful when Emily Letts filmed her abortion. That’s a great example of dealing with people’s misconceptions. The other thing we need to do is to stop apologizing about abortion all the time. They say abortion is really terrible. We say abortion is terrible, but you should be legally able to have one. That’s not really a ringing defense. There’s no such thing as a “bad” abortion. Life is messy and complicated; people are going to have sex and experience unplanned pregnancies. Abortion is just a part of life.

‘There’s No Such Thing As a “Bad” Abortion’