It had been a while since I’d really thought of Harry, one of the guys I played basketball with over the summer. But that video of a woman being catcalled 108 times in ten hours in New York that went viral last week brought it all back, and my interactions with him — or non-interactions, really — started bugging me all over again.

I met Harry (not his real name, since I don’t know it) on a really nice court overlooking the Hudson, near the New York Magazine offices, where I frequently played over the summer. When you play pickup ball in one place over an extended period of time, you get to know the folks you’re playing with a little bit. At the very least you learn their basketball tendencies, and sometimes you learn a bit more.

In Harry’s case, I learned that he was a terrible, incorrigible, borderline-compulsive street harasser. In his early 20s, I’d say, and with a slightly fullbackish physique, it really did seem like he couldn’t stop himself from trying to chat up every single female who was unfortunate enough to come within view. At least once I saw him fall into stride with a jogger, apparently figuring that by going for a run she was asking for dudes to come up and hit on her during her workout.

It happened over and over and over, and I thought about saying something. A lot, in fact! I had embarrassing-in-retrospect limousine-liberal fantasies about the warm glow I’d feel after confronting him about his behavior and, of course, deftly teaching him the errors of his ways. What a good guy I’d be! Except I never actually did anything about it. Alongside those positive fantasies sat the possibility of the message being rejected or, worse, of other players thinking it was weird that I was butting in like that. Some part of me calculated that it wasn’t worth it, and that part won out.

The video reminded me of the unfortunate way I handled the situation. Unhappy at the prospect of being part of some silent majority letting the sorts of jerks exposed in the video harass women without consequence, I called up Debjani Roy. She’s the deputy director at Hollaback!, the anti-street-harassment organization that partnered with Rob Bliss Creative on the hidden-camera outing. Her organization deals a lot with the issue of bystander intervention — that is, the thing I didn’t do — so I figured she’d have some thoughts on my experience.

The main takeaway for people in my position, she said, is to “consider what some of their blocks might be when it comes to intervening. There’s no single way to intervene.” Her organization lays this stuff out pretty clearly — this chart lists some of the reasons people don’t intervene: 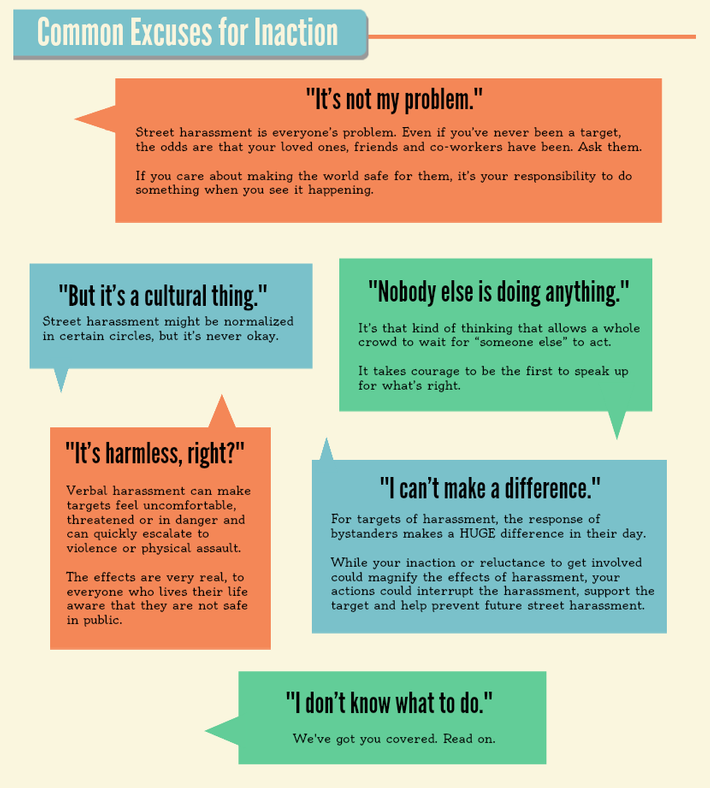 Several of them — “Nobody else is doing anything,” “I can’t make a difference,” and “I don’t know what to do” — certainly contributed to my inaction. So it’s not as though my experience was unique; anyone deciding whether to step up in a situation like this is probably weighing the same issues.

But am I overestimating the impact one disapproving conversation can have? Probably not, said Roy. Harry had probably, like many young men, been in a lot of social situations in which street harassment wasn’t looked down upon and may have been actively encouraged. “We all know about peer pressure,” said Roy. “And I think a lot of the original behavior comes out of that. Like, ‘Dude, why aren’t you hitting on her? Dude, why aren’t you trying to pick up more women? Why aren’t you yelling that at her?’” Having another guy come up and say exactly the opposite, then, can make an impact — even if it’s not guaranteed to.

Plus, making my displeasure known could have led to a snowball effect, explained Roy. “That one person acting and saying something often encourages other people to take a stand,” she said. In other words, maybe other people I was playing basketball with felt the same way but, like me, had fallen victim to that bane of anti-bullying efforts everywhere, pluralistic ignorance — “I’m not cool with this, but everyone else seems to be, so I’m not going to say anything.”

Okay, so let’s say I had been a bit more courageous about this and actually decided to talk to Harry. What should the message have sounded like? “We do suggest that people keep it short,” Roy said. The goal isn’t to leap onto a soapbox and launch a PowerPoint presentation on street harassment, but rather to provide firm, clear disapproval. She also said that briefly referencing the experiences of my female friends (almost all of whom have told me about their stories of being harassed on the street) would help — ideally, that makes it harder for the harasser to get away with the myth that all the women he’s hitting on are (secretly, invisibly) appreciating the attention.

So there’s a pretty clear blueprint for how to talk to a harasser, even if the actual act of initiating the conversation is a bit fraught. But Roy said something else that, I have to be honest, hadn’t really occurred to me: Even if you don’t feel comfortable talking to the harasser, quickly checking in with the victim after the fact can be very helpful.

“I think it makes a huge impact,” she said. “We did a content analysis with Cornell University where they took 223 stories from our site. And they, you know, picked it apart based on language and coding and looked at the psychological impacts. And then they also looked at the impact of bystander intervention, and they said that it does reduce trauma [among the victims].” This, she said, jibes with a lot of her organization’s past anecdotal findings. When victims’ stories include someone asking them if they were okay, or even giving them a knowing, apologetic glance, they often experience at least a modicum of relief in the wake of a very unpleasant situation. I wasn’t going to leave the court to go chase down victims of Harry’s harassment and apologize to them, of course, but there may have been ways I could have helped ameliorate the situation a bit even without confronting him directly.

What all this comes down to is that, in much the same way that harassing is a socially ingrained part of Harry’s life, not responding to “mild” incidents of harassment is a socially ingrained part of mine. For whatever reason, I and a lot of other otherwise “good guys” have succumbed to the notion that it’s best to just stay out of these situations rather than intervene. Based on that awful video, it’s probably an attitude we need to rethink.

The Time I Didn’t Stand Up to a Street Harasser

what we know 9:44 a.m.
Gunman Kills at Least 19 Children and Two Teachers at Texas Elementary School The deadliest school shooting since Sandy Hook ten years ago.
galas 9:24 a.m.
The PEN America Literary Gala Had Something to Say About Book Burning Margaret Atwood tried to burn a copy of The Handmaid’s Tale.
love and tiktok 8:00 a.m.
The Free Dating Coach That’s Already on Your Phone TikTok. It’s TikTok.