Strongly signaling your inclusion in a group does not always mean you’re a core member of that group — sometimes it means you’re actually on the fringe. If it’s a high-status group, jumping up and down yelling that you’re one of the cool kids might, in fact, signal status anxiety. In a new and highly self-aware paper, researchers at the University of Pennsylvania (a real Ivy, they’ll have you know) demonstrated this phenomenon in several contexts, ranging from Ivy undergrads to “international” airports.

Rozin and his co-authors call this an “asymmetrical social Mach band.” A Mach band is a visual illusion that highlights the contrast between two shades of color at their boundary. Picture a series of adjacent grey stripes, progressing from white at the top to black at the bottom: 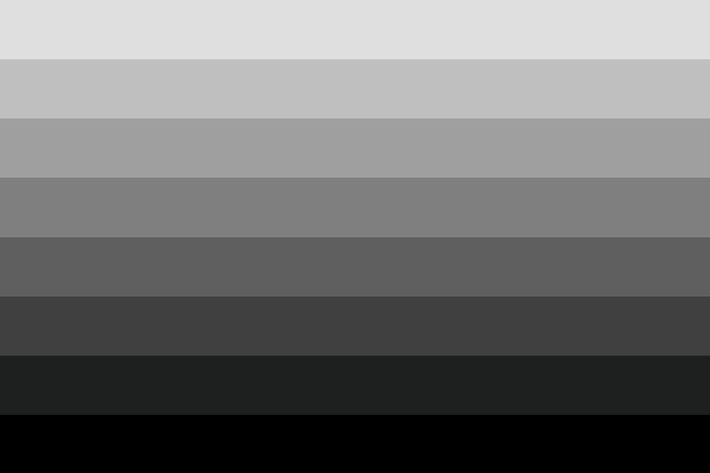 Each stripe looks darker at the top, where it meets a lighter stripe, and lighter at the bottom, where it meets a darker one. But each is actually one solid hue. Our visual system highlights borders for us by enhancing the contrast, making the lights especially light and darks especially dark where they meet.

Research psychologists see themselves as part of a superior light-grey band sitting, with other scientists, atop a darker-gray band of non-researchers. But because they lack test tubes and particle accelerators, they fear being lumped in with Dr. Phil, so they try to highlight the distinctions between themselves and the strata underneath. The social Mach band effect is “asymmetrical” because while people at the bottom of a tier try to differentiate themselves from those in the tier below, people at the top of a tier (standout clinical psychologists) don’t try to differentiate themselves from those in the tier above. The brights get brighter but the darks stay the same.

To study this effect more, well, scientifically, the researchers analyzed the “About Us” web pages for universities with “University” in their official school name. They looked at 55 national universities and 151 master’s universities (which have fewer doctoral programs) and counted how many self-mentions included the word university (e.g., “Harvard University” or “the University”) and how many did not (e.g., “Harvard”). National universities used the word university in 46.4 percent of self-references, whereas master’s universities used it 62.2 percent of the time. They just had to remind you that they’re not some run-of-the-mill liberal-arts college, like the dummies over at Amherst or Williams.

For each task, more Penn than Harvard students mentioned “Ivy” as one of their items: 27.3 percent versus zero percent for the “think of” task, and 35 percent versus 16.7 percent for the “describe to others” task. And because there was only a marginal difference in how students responded to the “describe” versus “think” prompts, the researchers write that this experiment suggests “that self-construal is of greater importance than social communication” when it comes to the social Mach band effect — in other words, the students’ use of “Ivy” to describe their schools may have been more important as a means of reassuring themselves than of impressing others. (This is a tentative finding, though; Rozin’s co-author Sydney Scott wrote in an email that “More work will need to be done to disentangle the importance of impression management motivations.”)

Looking beyond their data, the authors write:

There have been some past findings along these lines: Research by Young Jee Han and colleagues showed that people with new money wear louder luxury logos than those with old money. And in what Silvia Bellezza and colleagues call the “red sneakers effect,” high-status professors can get away with jeans and tennis shoes, while new recruits differentiate themselves from those below by dressing up.

These all seem like variations on “The lady doth protest too much”: I am NOT a regional airport! I am BIG and IMPORTANT! Watch me flyyyyy!

Even Airports Can Have Inferiority Complexes

keeping up with the royals 21 mins ago
Will Harry and Meghan Get to Go to the Coronation? Sources suspect they’ll be invited; whether or not they accept is another question.
love and war 9:00 a.m.
Can “Niche” Dating Apps Save Us? Services like Grindr, Feeld, and Muzz offer frustrated daters an alternative to Tinder and Bumble. But are they any better?
By Sangeeta Singh-Kurtz and Lakshmi Rengarajan
"wellness" Yesterday at 9:11 p.m.
Of Course Aaron Rodgers Is Going on a ‘Darkness Retreat’ It’s all part of his “era of contemplation.”
yikes Yesterday at 7:50 p.m.
Ashton Kutcher Purposely Chose To Pose Like That The awkward photos of Kutcher and Reese Witherspoon were all by design, apparently.
oscars Yesterday at 6:46 p.m.
Gina Prince-Bythewood Weighs In on the Best Actress Debate The Woman King director called out the lack of Oscar nominations for Black women.
teens Yesterday at 3:06 p.m.
Leonardo DiCaprio Is Not Currently Dating a Teen Why would you think that??
goodbyes Yesterday at 12:30 p.m.
RIP, Stripper Web For 20 years, the forum was a haven for new dancers seeking community.
ask a boss Yesterday at 12:00 p.m.
How to Answer ‘Why Are You Interested in This Position?’ in a Job Interview This is usually one of the first questions asked in an interview, and you shouldn’t wing your answer.
auto-refill Yesterday at 11:58 a.m.
The Beauty Products Beyoncé’s Makeup Artist Sir John Uses to the Last Drop Including Barbara Sturm’s Lifting Serum, Supergoop’s Unseen Sunscreen, and SkinMedica’s TNS Serum.
grammys 2023 Yesterday at 11:21 a.m.
Jay-Z Thinks Beyoncé Deserved Album of the Year Too In a TIDAL interview, he said that Renaissance “has inspired the world.”
action item Yesterday at 10:35 a.m.
How to Help the People of Turkey and Syria Two powerful earthquakes have killed more than 5,200 people.
power Yesterday at 8:00 a.m.
Inside the ‘Rampant Culture of Sex’ at ABC News T.J. Holmes and Amy Robach weren’t the only ones — “It felt like everybody was sleeping around,” said one former GMA staffer.
By Angelina Chapin
reality tv Yesterday at 7:00 a.m.
Real Housewives Helped Heather Gay Actually Get Real Her new memoir, Bad Mormon, recounts how Bravo delivered her from the church.
copenhagen fashion week Feb. 6, 2023
9 Things I Learned at Copenhagen Fashion Week Scandinavian style and its purveyors might be onto something!
power Feb. 6, 2023
What to Know About the Protests in Iran Since Mahsa Amini’s death, Iranian forces have killed more than 500 protesters, including women and children.
is this flirting? Feb. 6, 2023
Divorced Dad Experiments With Thirst Traps A newly retired Tom Brady is posting mirror selfies.
brooding Feb. 6, 2023
What If You Just Didn’t Clean That Up? Our ideas about cleanliness are stuck in the mid-20th century. Today, women can afford to care less.
By Kathryn Jezer-Morton
:( Feb. 6, 2023
Ben Affleck Plumbs New Depths of Existential Despair Not everyone had a nice time at the Grammys, but at least one man was honest about it.
hairy situations Feb. 6, 2023
15 Ways to Convince Your Hair to Grow Faster and Longer It’s not just a waiting game.
By Erica Smith
grammys 2023 Feb. 6, 2023
Fans Are Still Processing That Beyoncé Snub Are Grammy voters okay?
More Stories