Given how much we hear about youthful binge-drinking and its sometimes-tragic consequences, it would be natural to think that it’s young people engaging in the most reckless levels of alcohol consumption. Not so, according to a new Vital Signs report from the Centers for Disease Control (full report here).

Between 2010 and 2012, the report notes, six people died in the U.S. from alcohol poisoning every day. The vast majority of them — 76 percent — were men, but what’s more surprising is the age breakdown: 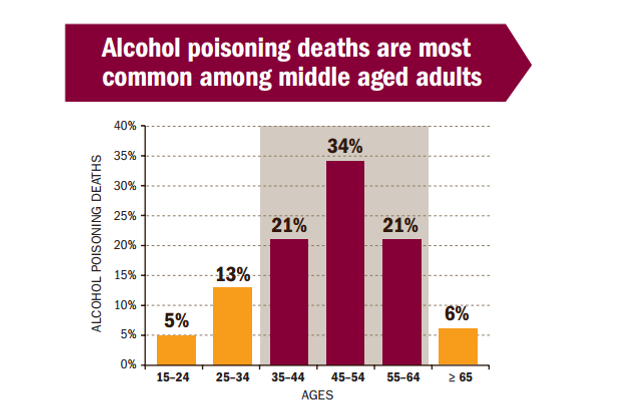 A full 82 percent of those who died from alcohol poisoning were 35 or older. I emailed the CDC to ask whether the age breakdown was attributable to older bodies being less able to handle all that toxicity. Dr. Bob Brewer, head of the Center’s alcohol program, replied that no, it really is just that older people actually engage in more binge-drinking. “The large portion of the alcohol poisoning deaths among middle-aged adults and men is consistent with the distribution of binge drinking episodes in the U.S., most of which are reported by adults age 26 years and older,” he said.

A couple of theories about why many people might find this surprising: For one thing, lots of the deaths you hear about on the news are alcohol-related but not attributable to alcohol poisoning. So those terrible, all-too-common instances of someone stumbling off a deck wouldn’t count; the CDC tallied only those cases in which “alcohol poisoning was classified as the underlying (i.e., principal) cause of death.”

Perhaps more important, when a young person dies in an alcohol-related incident, it usually gets a lot of media attention and is held up as a particularly tragic event. When a middle-aged or older person dies of alcohol poisoning, it is of course still a tragedy, but one often shrouded in a fair bit of stigma and/or secrecy. We tend to hear less about these deaths, except when they hit close to home, and therefore underestimate their frequency.