However frustrating the current state of race relations in the U.S., there is, according to various pundits and prognosticators, hope for the future: Millennials, they say, are the most tolerant, race-blind generation in human history. And when they grow up and constitute the bulk of the adult U.S. population, many of the problems that have plagued U.S. race-relations for centuries will simply melt away, relics of a less-enlightened past.

It’s a claim that shows up again and again. A 2010 Pew Research report trumpeted that more than two decades of research confirm that “the younger generation is more racially tolerant than their elders.” In the Chicago Tribune, Ted Gregory seized on this to declare millennials “the most tolerant generation in history.” David Burstein, the millennial author of Fast Future, said millennials are “more tolerant … than any generation before them.” Hannah Seligson, also a millennial, sounded a similar note in the Daily Beast, writing that research “reveals that we’ve emerged as the most diverse, tolerant, pioneering, educated, and innovative generation in history.” And it’s not just the pundits: A poll from Reason-Rupe shows that in every age bracket, a majority of respondents say that “tolerant” describes millennials “very well.”

Given that race-based gaps pertaining to employment opportunities, income, education, incarceration, and wealth are either persisting or growing, there’s a welcome sense that help is on the way in the form of a more racially enlightened populace.

The problem with these rosy sentiments is that they’re at least partly false. Those who claim that the rise of the millennials will usher in a new age of racial harmony are cherry-picking or misreading statistics. They’re doing so primarily in two ways: by lumping together all millennials when they report survey findings rather than breaking out white millennials views on racial issues, or by focusing narrowly on a small set of questions about explicit racial beliefs that don’t tell the full story. The fact of the matter is that millennials who are white — that is, members of the group that has always had the most regressive racial beliefs, and who will constitute a majority of U.S. voters for at least another couple of decades — are, on key questions involving race, no more open-minded than their parents. The only real difference, in fact, is that they think they are.

When it comes to certain surface-level statistics, it’s true that millennials as a group are more racially progressive than their parents. Pew data show they are more likely to support interracial marriage and dating and are more in favor of immigration. Nearly all agree that “everyone should be treated equally, regardless of their race.”

Dig just a few inches deeper, though, and there’s plenty of fodder for pessimism. Just ask Spencer Piston, an assistant professor of political science at Syracuse University. He examined the 2012 American National Election Studies racial stereotype battery, in which survey respondents are asked to rate whites, African-American, Hispanics, and Asians according to how hard-working or intelligent they are, and found something startling: Younger (under-30) whites are just as likely as older ones to view whites as more intelligent and harder-working than African-Americans (among the older cohort, 64 percent felt this way, and among the younger cohort the number was 61 percent — not a statistically significant difference). “White millennials appear to be no less prejudiced than the rest of the white population,” Piston told Science of Us in an email, “at least using this dataset and this measure of prejudice.”

Asking people racially tinged questions directly can only get you so far, of course. Social scientists have known for a long time that there frequently exists a gap between how people respond to questions and how they really feel — people are swayed by the expectation of how they should answer. A favorite way around this is to measure implicit bias — that is, forms of bias that the holder might not even be aware of and that can manifest themselves in split-second decision-making. In the most common examples of so-called implicit association tests, words or images are briefly flashed, “priming” subjects to respond to subsequent stimuli — if you’re quicker to pair a black face with the word criminal, to take a hypothetical example, you’re exhibiting more implicit bias, and researchers think these effects extend out of the lab into everyday interactions.

If white millennials were, in fact, significantly more racially tolerant than previous generations, it would show up in implicit association tests. And yet they do no better than many of their older counterparts. For example, a study of 2.5 million voluntary IAT tests from between July 2000 and May 2006 shows very little difference across age groups, with the exception of those 60 or older. Other age cutoffs show a similar result: With the exception of the elderly, who do exhibit significantly more racial animosity, there is little generational difference in implicit bias. What does divide old and young is differences in the accuracy of their self-evaluation of racial bias. While older people underestimate their bias by an average of .38 points on a four-point scale, the youngest two brackets under-report their bias by an average of .52 points on average. Younger people, in other words, are simply more deluded about their own beliefs. 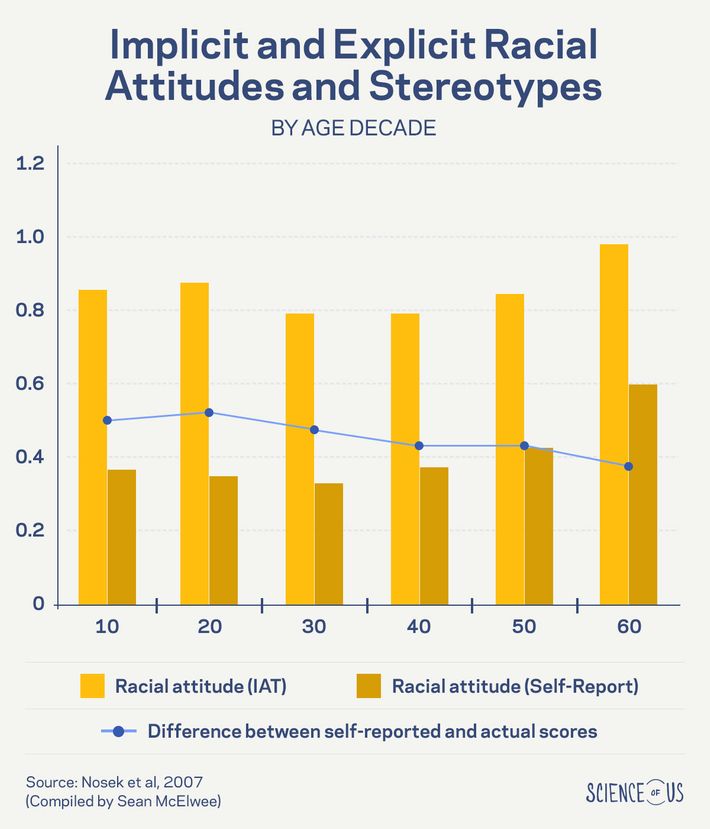 It’s true that America is becoming a more racially diverse place — as is frequently pointed out, it is likely that by sometime around 2050, whites will be in the minority. Hopefully, this diversity will bring with it more understanding. But many observers, appealing to stereotypes about millennials that have dubious empirical grounding, are creating a veneer of false progress. Millennials may eventually usher in a more racially enlightened age, but such a shift will require a deeper understanding of race and racism than many white millennials exhibit, rather than the self-congratulatory rhetoric of a postracial society.

Millennials Are Less Tolerant Than You Think

See All
oh no Yesterday at 10:14 p.m.
The White House Prepares for a Final Cursed Christmas They’re reportedly hosting a slate of parties, in-person and indoors.
whoops! Yesterday at 6:36 p.m.
Rudy Giuliani’s Worst Month Ever It has been a series of spectacular snafus for the president’s lawyer.
collaboration station Yesterday at 6:21 p.m.
A New Telfar Bag That’ll Surely Sell Out The Bushwick Birkin gets a fuzzy upgrade from UGG.
media Yesterday at 5:15 p.m.
Future Robot Overlord Pens Surprisingly Tender ‘Modern Love’ The New York Times challenged AI to write for its romance column, and the results were, well, unexpected.
next level Yesterday at 3:37 p.m.
Who Gets to Enjoy the Outdoors?  Evelyn Escobar-Thomas’ group Hike Clerb created a safe space for women of color in nature.
By
gallery Yesterday at 3:21 p.m.
Every Story in America, Through One Neighborhood  Photographer Brenda Ann Kenneally shares the experience of a mother who was evicted during the pandemic.
By Brenda Ann Kenneally
deal of the day Yesterday at 2:22 p.m.
This Rarely-on-Sale Augustinus Bader Cream Is 20 Percent Off A favorite of facialists, celebrities, and beauty obsessives alike.
look book Yesterday at 1:30 p.m.
The Look Book Goes to The Chelsea Flea  After a nearly nine-month closure, the 44-year-old market is back.
nailed it Yesterday at 12:53 p.m.
Have We Been Clipping Our Nails All Wrong? Possibly, according to Matthew McConaughey, “extremely talented fingernail clipper.”
aliens Yesterday at 12:38 p.m.
Looks Like the Aliens Dropped Something A helicopter pilot has found a mysterious metal structure in the wilderness of Utah.
fashion news Yesterday at 12:36 p.m.
I Cannot Wait to Play the Balenciaga Video Game This is what the brand is doing instead of a fashion show.
why is your skin so good Yesterday at 12:04 p.m.
How This Rihanna-Approved Facialist Gets His Skin So Good Sean Garrette’s essentials for “doll skin.”
q&a Yesterday at 12:01 p.m.
Congress Is Getting Another Expert Thrift Shopper Incoming Missouri representative Cori Bush on putting together a D.C. uniform on a budget.
ask a boss Yesterday at 12:00 p.m.
‘My Boss Keeps Inviting Herself Over to My House’ Even during non-pandemic times, this would be highly inappropriate — she is abusing her power by trying to force herself on people socially.
shopping Yesterday at 11:43 a.m.
Couch Clothes You’ll Want to Wear Outside UGG released an exclusive collection at Nordstrom.
home for the holidays Yesterday at 11:00 a.m.
‘Frankly, I Just Need a Change of Scenery’ Six people explain why they’re still traveling for Thanksgiving.
By Anna Silman
health Yesterday at 10:10 a.m.
So When Exactly Will a COVID Vaccine Be Ready? Everything you need to know about the most promising candidates, how they’ll be distributed, and what happens after.
crime Yesterday at 9:55 a.m.
What Happened to Quawan Charles? A Black teen was found dead in a field. His family says he looked “like he’d been tortured.” Law enforcement still hasn’t ruled his death a homicide.
acquiescence Yesterday at 8:00 a.m.
Turns Out It’s Pretty Good: Nightgowns This year, I gave in to slothful elegance.
By Amil Niazi
parenting Yesterday at 6:00 a.m.
The Children of Quarantine What does a year of isolation and anxiety do to a developing brain?
By Lisa Miller
More Stories