What makes for a happier relationship: Seeing your partner as they truly are? Or seeing your partner as you wish they were? A surprising body of research in social psychology suggests it’s the latter: People who believe their partner lives up to everything they’ve always wanted in a significant other tend to be happier and more satisfied with their relationships — even if (or perhaps precisely because) they’re totally deluding themselves.

The Case Against ‘Soul Mates’
Compatibility in Relationships Is Overrated

One of the more comprehensive studies on this subject was published a few years ago in the journal Psychological Science by a team of researchers at the University at Buffalo and the University of British Columbia. The researchers, led by then-graduate student Sandra L. Murray, staked out a courthouse in Buffalo, New York, and rounded up about 200 couples who were there to get their marriage licenses. Then, twice a year for the next three years, the researchers surveyed each partner individually, asking them questions about a series of behavioral traits (positive things like honesty and kindness, and negative things like argumentativeness). They answered these questions about themselves, their partners, and their idea of an ideal, imaginary partner who would be their perfect match.

When Murray and the research team analyzed the couples’ answers, they looked for people who idealized their partner: those who reported that their partner’s traits mirrored those of their perfect match — even if their partner did not report seeing those traits in him- or herself. “If I see a pattern of traits that are more positive than what my partner says about themselves, that’s what we mean by idealization,” said Dale Griffin of UBC, one of the study’s co-authors. “That is, there is a correlation between my ideal set of traits and what I see in my partner that she does not see in herself.”

Each time the researchers surveyed the couples, they also gave them a survey designed to measure how satisfied they were with their relationships. As the years went by, those who held these positive illusions about their partners were happier in their relationships than those who saw their partner without the rose-colored glasses. (Though, as you can see in the chart below, even the deluded couples reported a decline in happiness over time.) 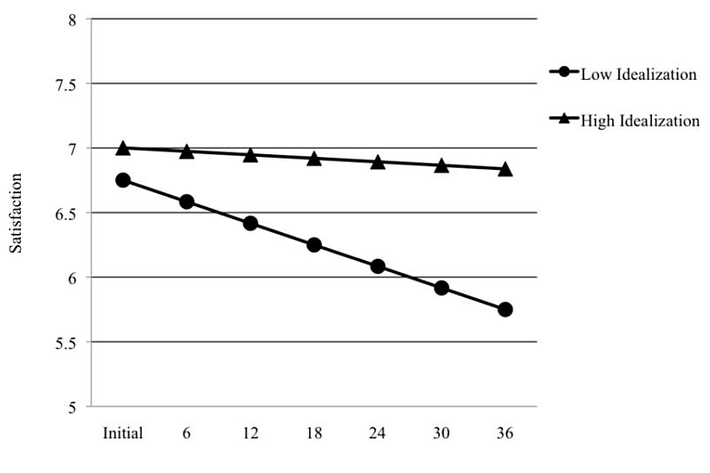 The Psychological Science paper includes a roundup of other, similar findings of this nature:

It’s not exactly clear why this association appears to exist, as the researchers didn’t test for that. But Gary Lewandowski, a psychologist at Monmouth University who studies relationships (though was not involved in this research) and runs the website Science of Relationships, explains the power of positive illusions this way: “Your partner knows you have these beliefs, and they don’t want to let you down,” he said. “So they start living up to these illusions. It could work sort of like a self-fulfilling prophecy.”

Indeed, a similar finding was recently written up in Harvard Business Review, though this one was on the relationship between a boss and an employee; the headline — “If Your Boss Thinks You’re Awesome, You Will Become More Awesome” — really says it all. The context is different, but the same basic concept of positive illusions may apply.

This quirk of human behavior can backfire, however, when the relationship is not a good one, said Eli Finkel, a psychologist at Northwestern University, in an email. “Positive illusions can keep us from closely monitoring our partner’s behavior and evaluating whether our partner is a good fit for us,” he said. Put another way: “Illusions are probably beneficial for people in good relationships and potentially … dangerous for people in bad ones,” said Jim McNulty, a psychologist at Florida State University who has studied positive illusions.

That said, realism may not have much of a place in a happy romance. “Perfect accuracy at all times probably isn’t the best way to sustain a long-term, high-quality relationship,” said Finkel. Love, in other words, probably is a little bit blind.

Happy Couples Are Probably Deluding Themselves