A lot of people die in traffic accidents — about 34,000 a year in the United States alone — and a fair number of these deaths are caused by people missing or ignoring traffic signs. So, for obvious reasons, researchers are interested in figuring out how to make signs that convey vital information more attention-grabbing. In a new paper in Journal of Consumer Research, a team led by Luca Cian appears to have found evidence supporting a pretty straightforward tweak that could do just that.

The paper involved five studies in which the researchers put undergrads through simulated driving experiences, presented them with different signs, and tracked their subsequent eye movements and actions. The main thing the authors wanted to test was whether traffic signs that were more “dynamic” — that is, that depicted more action — would be more likely to grab and maintain the drivers’ attention.

Here are some examples from the study: 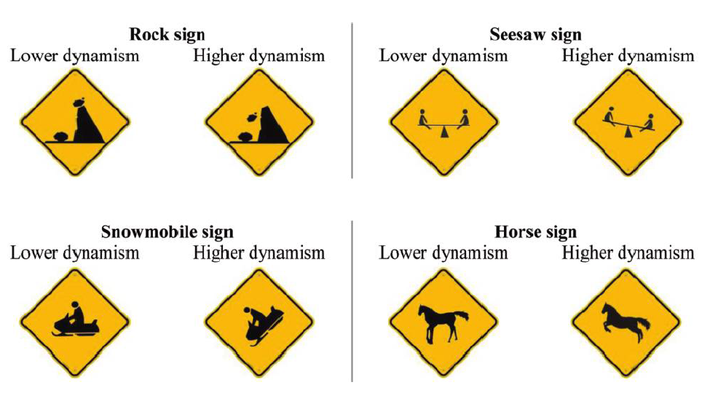 Consistently, the more action-y signs were, in fact, more effective — drivers fixated on them earlier, reacted to them quicker, and did a better job scanning their (virtual) surroundings than they did when presented with more “traditional” signs.

Now, as with any study of real-world behavior that takes place in a lab, there are caveats: Perhaps most important, as the researchers point out, it could be that the would-be drivers were in part reacting to the novelty of the more dynamic signs rather than to anything inherent to their content. Still, the researchers cite past evidence about human perception to explain why the signs would work, so it’s not as though this is an out-of-left-field finding. If further research along these lines holds up, it could lead to a rather simple way to make roads safer.

How to Get People to Stop Ignoring Traffic Signs