Hey, is that your boyfriend? The guy with the hair? The only one in the lavender suit. You know who I’m talking about, the guy who is freaking everyone the eff out. Yes. Jared Leto. I didn’t want to name-drop. Anyway, a couple of us were wondering if you maybe thought it was time to call him a car, or take him home, or maybe just sit him down for a little water and a piece of bread. Oh, he always acts like an unapologetic puppy that just devoured a bag of espresso beans? Ah. How much fun for you. Oh, yes, you can definitely tell that deep down he’s super-mellow. Of course. Enjoy the rest of your night. 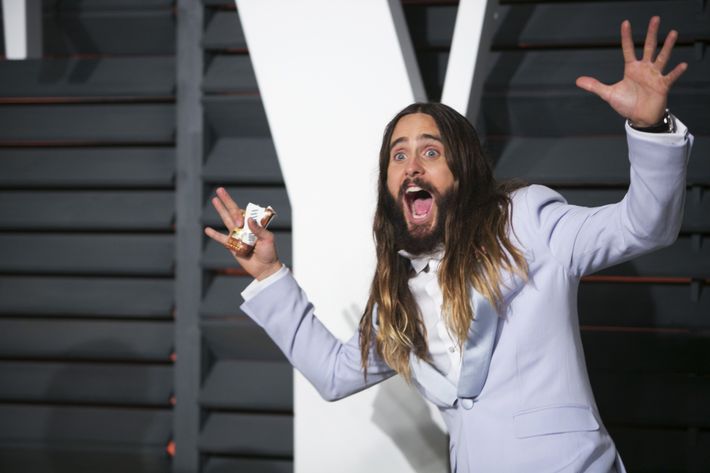 This is the pose someone makes approximately five minutes before asking people if they want to see him do a backflip into the swimming pool.

It seems like he thinks he’s wearing an “I’m With Stupid” shirt, but it has backfired.

Leto’s gesture communicates: Can you believe this guy? But Leto is the guy that we collectively cannot believe.

Perhaps, like a puppy, Jared Leto must sweat through his tongue glands. Diane Kruger is upset that she has to wonder about this.

He’s checking you out! He’s being so flirty and fun.

Even a black-and-white photograph does not make his action seem more sophisticated.

It’ll be so funny when they get those photos developed. He’s playing a prankster long game and he loves it.

Haha, they have no idea he’s back here! This is hilarious stuff. 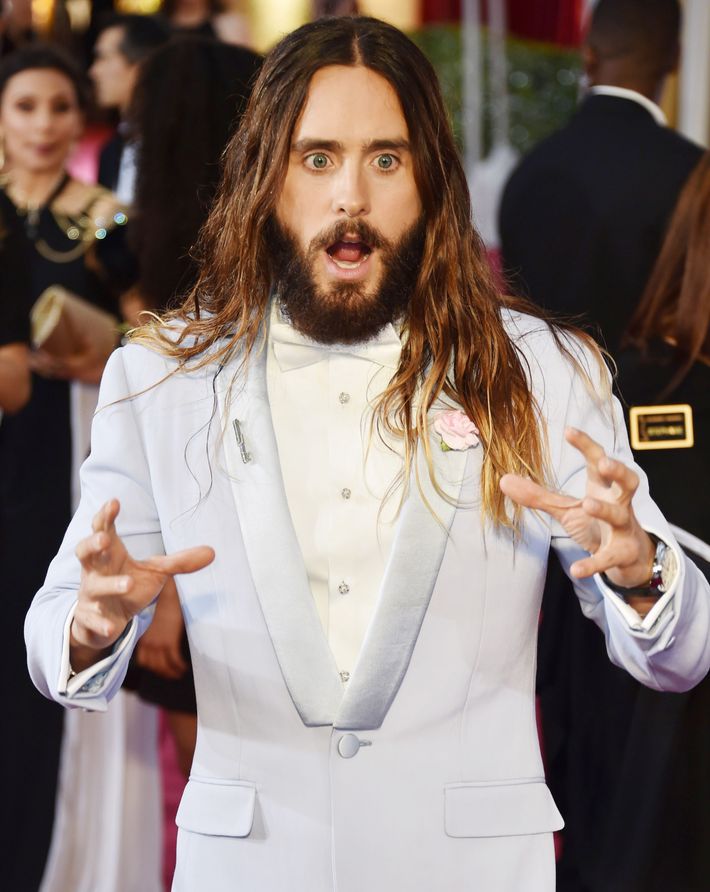 A Final Item of Questionable Evidence

The embarrassing boyfriend is rarely self-aware: In this photo, it is possible that the night is flashing through Leto’s eyes and he understands the weight of his uproarious actions. Or, he just got a great new idea to pants someone.

oh no 5:59 p.m.
Is This the End of Bed Bath & Beyond? The retailer is closing 87 locations and could be headed toward bankruptcy.
in her shoes podcast 3:43 p.m.
In a World Dominated by Filters, Paulina Porizkova Is Embracing Her Age  On this week’s episode of the Cut’s In Her Shoes podcast, the former supermodel talks aging, betrayal, and her career.
By the Cut
society pages 3:29 p.m.
The Whitney Art Party Gets Horn-y Go inside the museum’s astrology-themed event with Ashley Graham and Tracy Anderson.
healthcare 3:25 p.m.
Florida Wants to Force Student Athletes to Share Their Menstrual History The move raises concerns about potential legal repercussions for students suspected of having abortions.
obsessive tester 2:31 p.m.
30 Makeup Brushes Every Part of Your Face Will Enjoy Soft brushes at every price point.
academy awards 1:39 p.m.
Unpacking Andrea Riseborough’s Controversial Oscar Nomination Why are people so worked up about the actor’s grassroots campaign?
your next move 12:52 p.m.
‘I Hate My Cushy Job. Should I Suck It Up or Just Quit?’ The answer is right there in the question.
q&a 12:34 p.m.
Bethann Hardison Looks Back on Her Life With a New Documentary The activist and model spoke to the Cut about premiering Invisible Beauty at Sundance and why she refuses to use the term “Black excellence.”
finally 12:09 p.m.
Do I Feel Sad for Tom Brady Now? Having lost everything to football, the quarterback is finally retiring for real.
health and wellness 12:07 p.m.
Naomi Watts Wants You to Talk About Lube “What kind of Dry January have you had … Dry AF … am I right?”
marketing? 12:03 p.m.
Lingerie Ad Compares Bra to … Ryan Reynolds? Harper Wilde has pulled a truly bizarre endorsement (?) of their product.
spring fashion 12:00 p.m.
Everyone’s Dissolving Their Pillowy Filler Faces The filler era has ended. Now, everyone’s scooping out their face.
By Sangeeta Singh-Kurtz
why is your skin so good 11:47 a.m.
How This YouTube Beauty Executive Gets Her Skin So Good Chanel Tyler isn’t dubbed “the glow expert” for no reason.
beyonce 9:51 a.m.
Hope You’ve Been Saving for Beyoncé Tickets The Renaissance tour dates are finally here.
love and war 9:01 a.m.
What ‘Feminist Tinder’ Promised Bumble set out to make dating better for women. Did it deliver?
By Sangeeta Singh-Kurtz
ask a beauty editor 8:00 a.m.
‘I Love That Lipgloss Is Back, But Are There Any That Actually Last? ’ These are the longest-lasting glosses, according to experts. Follow their application tips if you want better wear.
spring fashion 8:00 a.m.
The Cool Tang of Ice Spice Visiting with New York’s princess of rap.
By Danya Issawi
celebrity Yesterday at 6:15 p.m.
Ashton Kutcher Finally Addressed Danny Masterson’s Rape Trial He hopes his That ’70s Show co-star is “found innocent of the charges brought against him.”
rust Yesterday at 4:00 p.m.
Everything We Know About the Rust Shooting Alec Baldwin and prop armorer Hannah Gutierrez-Reed have been charged with involuntary manslaughter.
spring fashion Yesterday at 3:00 p.m.
Vitamins for Virgos, Candles for Capricorns Truly everybody wants in on astrology.
More Stories