Tajay Ashmeade, No. 33 center of the Seton Hall Pirates, posts up against the Villanova University Wildcats during the Big East Conference Women’s Basketball Championships on March 2, 2012. Photo: Bob Stowell/Getty Images

There is obviously a pretty big gap between women’s and men’s sports at just about every level, but college basketball is one instance in which female athletes have achieved a fair amount of success, at least in terms of national visibility in the United States. Most casual sports fans at least know who Sheryl Swoopes is, for example, and that UConn has had a historically dominant team.

There are still a lot of differences between how we view male and female athletes, though. Nicholas Subtirelu, a Ph.D. student in the department of applied linguistics and ESL at Georgia State University, came up with a crafty way to examine some of these differences: As he explained on his blog Linguistic Pulse, he downloaded “all of the articles for Division I men’s and women’s basketball from the past 10 years” from NCAA.com, giving him “3451 articles about men’s basketball (containing about 2.75 million words) and … 1825 articles about women’s basketball (containing about 1.2 million words)” to work with.

Then, setting aside proper names and the like, he produced this graph showing which words were most commonly used in the write-ups for each game: 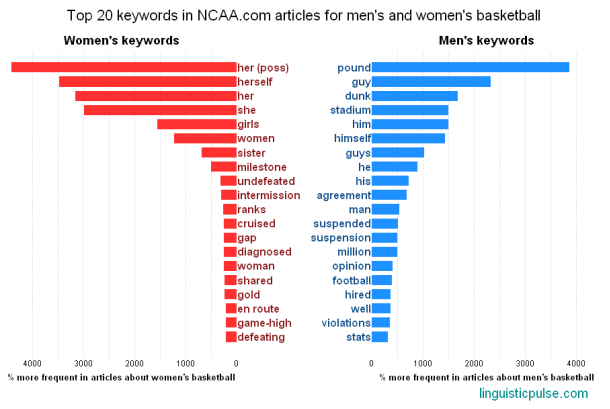 As Subtirelu points out, some of the results aren’t entirely surprising — men’s coverage is going to include terms like “guys” more frequently, of course. But the word at the very top of the men’s list — “pound” — is quite telling. As Subtirelu explains in the post, he didn’t find one report of a woman’s weight in all the coverage he combed through. Men, on the other hand, are described this way all the time — everyone knows that part of the reason LeBron James (to take a non-college example) is so dominant is that his playing weight is basically never lower than 250 pounds.

I asked him for some informed speculation about why this might be. Here’s how he responded:

I suspect that female athletes face a double-edged sword with regards to their weight. To succeed as athletes, they are expected to be strong and powerful, but as women they are still often evaluated according to beauty standards that frequently favor smaller women. Journalists’ choice not to mention female athletes’ weight may prevent readers from having their attention drawn to what is ‘unfeminine’ about these women, their size and power, yet that size and power may be the very thing that their appeal as athletes depends on.

To Run Faster, Worry Less About Being Skinny

In other words, if you’re a male power forward, there really isn’t all that much of a stigma against being a hulking, physically imposing presence — the gender norms you face line up nicely with what’s physically required for you to be good at your job in the low post. If you’re a woman who plays this position, though, it’s a different story: It’s almost as though you have to choose between having a power forward’s body and a “womanly” one.

The Taboo Subject in Women’s Basketball