Over time, society’s prevailing views on certain issues change, and trying to figure out exactly what is driving those changes is really, really difficult given how many different factors are at work. As researchers Jean Twenge, Nathan Carter, and W. Keith Campbell note in a new paper in Social Forces, one example of a long-running cultural change is that Americans have become increasingly tolerant of unpopular opinions over the last four decades, at least based on their responses to standardized questions in the General Social Survey about whether they’d ban certain books from libraries or allow people with certain types of beliefs to give public speeches or teach their kids.

This sort of long-running shift in opinion, they write, can be broken down into three categories: “time period (a cultural change that affects people of all ages), birth cohort/generation (a cultural change primarily affecting young people that is retained with age), and age,” which simply refers to a given individual’s changing opinions as they progress through life. Part of the goal of their paper was to figure out to what extent each category could account for the long-running increase in tolerance.

They found … well, a lot of stuff. It’s a paper with a fair amount of statistical fanciness going on, so the best way to unpack some of its findings might be to run down four of its graphs that help explain the tolerance trajectory of Americans since 1972. It’s worth keeping in mind that tolerance here means acceptance of a wide range of viewpoints: Respondents were asked about people who are gay, and people with racist, pro-Communist, and pro-military-dictatorship views, among others. So this isn’t just about types of tolerance we associate with the colloquial use of the word. 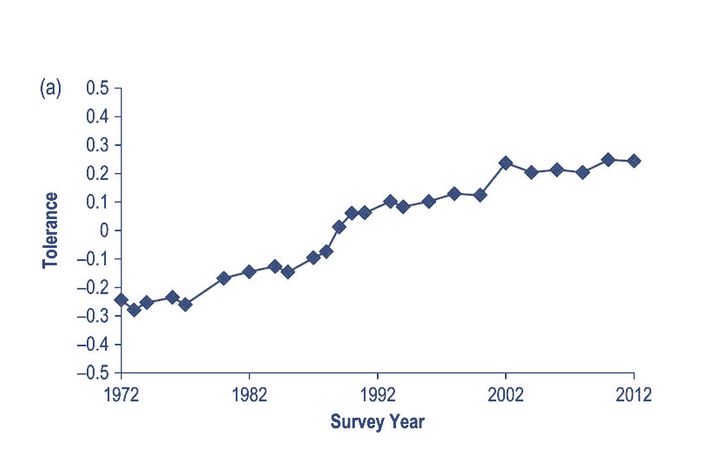 What it means: Since 1972, the tolerance level of the average American plucked at random has been on a steady upswing. When the researchers crunched the numbers, they found that survey year “was the main driver of variability in total tolerance” — that is, broad changes to societal opinion appeared to matter more than generational effects or age. So while a given American’s age and the political sensibilities of his or her birth cohorts do matter, they appear to matter less than the period of history in which they live. 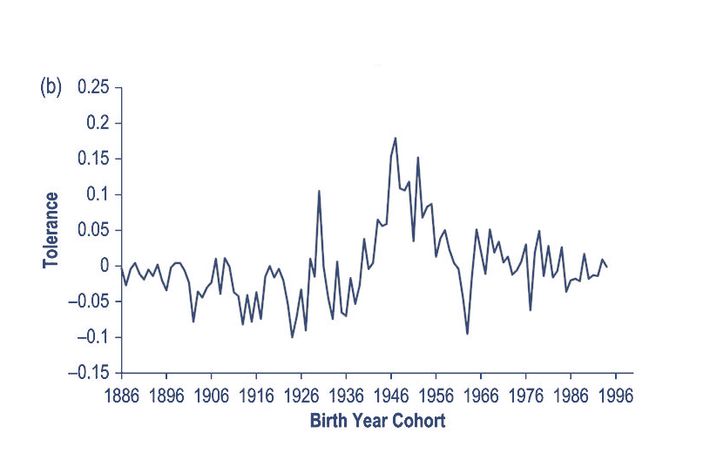 What it means: This graph attempts to separate out cohort effects — that is, the extent to which individuals’ levels of tolerance for unpopular opinions were affected by the views of their generation, rather than by their age or the year in which they were surveyed. As the graph indicates, “the first wave of Boomers born in the 1940s express[ed] the most tolerance, especially compared to the Silent generation born 1925–1945 ... More recent generations, such as Generation X and Millennials, were about average in tolerance when time period and age effects were removed.” So some of that boomer insufferability about changing the world and making it a better, more tolerant place? There’s something to it, unfortunately, at least if this study is any indication. 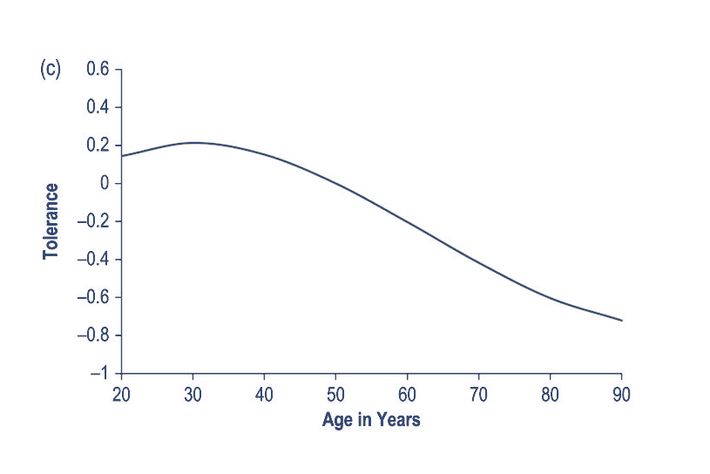 What it means: Whereas the previous two graphs attempted to separate out the effects of survey year and cohort, this one attempts to control for those two and look only at the relationship between age and tolerance. It suggests that, all else being equal, people generally grow less tolerant as they age. But these age differences seem to be mattering less and less, as you’ll see in the next graph. 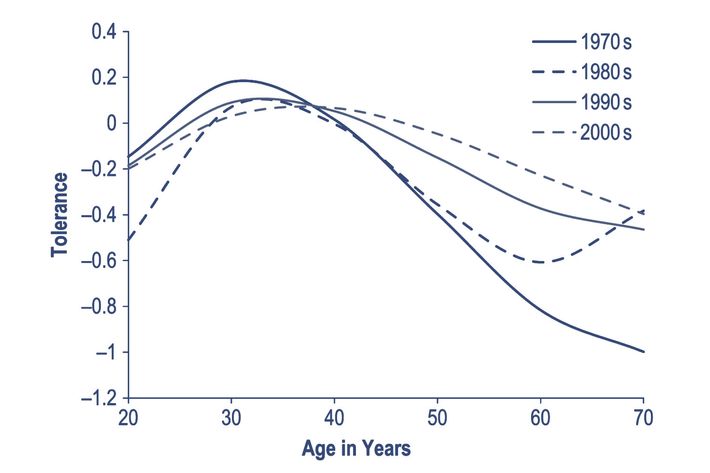 What it means: This graph shows age-based differences in tolerance in each decade that the researchers studied. The less wavy the line, the less of an age difference the researchers observed among respondents of different ages in that decade. So, as the researchers explain, “In the 1970s, 18-year-olds were considerably more tolerant than 60-year-olds. In the 2010s, however, these age groups differed little in their level of tolerance.” It’s clear that tolerance of dissenting views is increasingly “in” — even if we can’t tell a fully fleshed-out story that explains why.

parties! 15 mins ago
Pauline Chalamet, Tessa Thompson, and More of the Bestest Party Pics This Week Partying with Guerlain, Marni, and more.
life after roe 3:38 p.m.
The Future of Abortion Pills Is on the Line One Trump-appointed judge holds the power to effectively ban medication abortion even though the U.S. approves its use up to ten weeks into pregnancy.
spring fashion 3:00 p.m.
Ella Emhoff’s Other Plus One Her always-present Secret Service detail.
style 2:41 p.m.
At Marc Jacobs, a Generous, Life-Enhancing Fashion History Lesson The designer’s latest show, “Heroes,” celebrated the the late Vivienne Westwood.
in memoriam 2:33 p.m.
Paco Rabanne Has Died The revolutionary fashion designer was 88.
spring fashion 2:00 p.m.
11 Spring Bags, From $7 to $7,900 This season’s most compelling bags, from Forever 21 to Hermès.
best in class 1:50 p.m.
16 of the Very Best Water Bottles Always be hydrating.
By Emma Wartzman
valentine's day 1:20 p.m.
The 21 Best Last-Minute Valentine’s Day Gifts Where and when to get them.
friday sales 1:06 p.m.
20 Things on Sale You’ll Actually Want to Buy: From Klorane to Patagonia Including a heart-shaped mini waffle maker, our favorite cream-blush stick, and a moisturizer packed with snail mucin.
valentine's day 12:14 p.m.
19 Nontraditional Valentine’s Day Gifts Give something unexpected this February 14.
spring fashion 12:00 p.m.
Mei Kawajiri’s Very Extreme Nails  Her completely over-the-top talons landed her features in magazines and gigs backstage for Marc Jacobs, Tom Ford, Miu Miu, and Moschino.
By Maya Allen
fashion 11:59 a.m.
Do Not Show Up Late to the Marc Jacobs Show Lourdes Leon was apparently denied entry for arriving after the doors closed.
keeping up with the royals 10:53 a.m.
Will Harry and Meghan Get to Go to the Coronation? Sources suspect they’ll be invited; whether or not they accept is another question.
q & a 10:00 a.m.
Rachel Bilson Has Some Notes for The Bachelor The Accused actress and podcast host also talked about reuniting with her O.C. co-star Mischa Barton.
a choice? 10:00 a.m.
What Is Going On With Austin Butler’s Voice? I fear he may be stuck talking like Elvis forever.
extremely online 9:40 a.m.
I Can’t Shut Up About About Nancy Pelosi’s Hot-Dog Diet The former House Speaker also endorses ice cream for breakfast.
spring fashion 8:00 a.m.
The Woman Who Became McQueen The quiet ascendance of Sarah Burton.
By Cathy Horyn
culture 8:00 a.m.
This Is Pamela, Finally The model-actress’s memoir and documentary reveal only what she wants us to know. It’s about time.
By Roxane Gay
the wedding files 7:00 a.m.
At Georgia O’Keeffe’s Ghost Ranch, an ‘Epic’ Wedding No speeches, just dancing.
By Kaitlin Menza
¡hola papi! 6:00 a.m.
‘I Feel Abandoned by My Friend’ Hopefully the two of you can have a productive conversation that leaves you both in a healthier place.
By J.P. Brammer
More Stories