In the year of Barack Obama’s election, the artist Hank Willis Thomas created a project called “Unbranded: Reflections in Black by Corporate America, 1968–2008.” It was made up of 82 magazine advertisements, two from each year, that showed or made reference to African-Americans — except that he’d stripped all the text out. Sans captions, the illustrations and photographs turned flat-out strange, and were uncannily revealing about the intentions and attitudes of the (mostly white) people who made those ads.

Starting April 10 at Jack Shainman Gallery, he’ll show a follow-up project, “Unbranded: A Century of White Women, 1915–2015.” Once again the images speak for themselves, as the original ads aren’t on view or in the catalogue. The models are posed in just about every way you could put a woman in a corner: caged, dangled off cliffs, straddling all sorts of objects, straitjacketed. They’re often funny — can you believe that was considered okay? — before they’re not. But Thomas cautions us to avoid how-far-we’ve-come platitudes, in part because the ad images from the past few years aren’t so progressive either. “Our values,” he notes drily, “may be seen as pretty problematic to the next generation.” 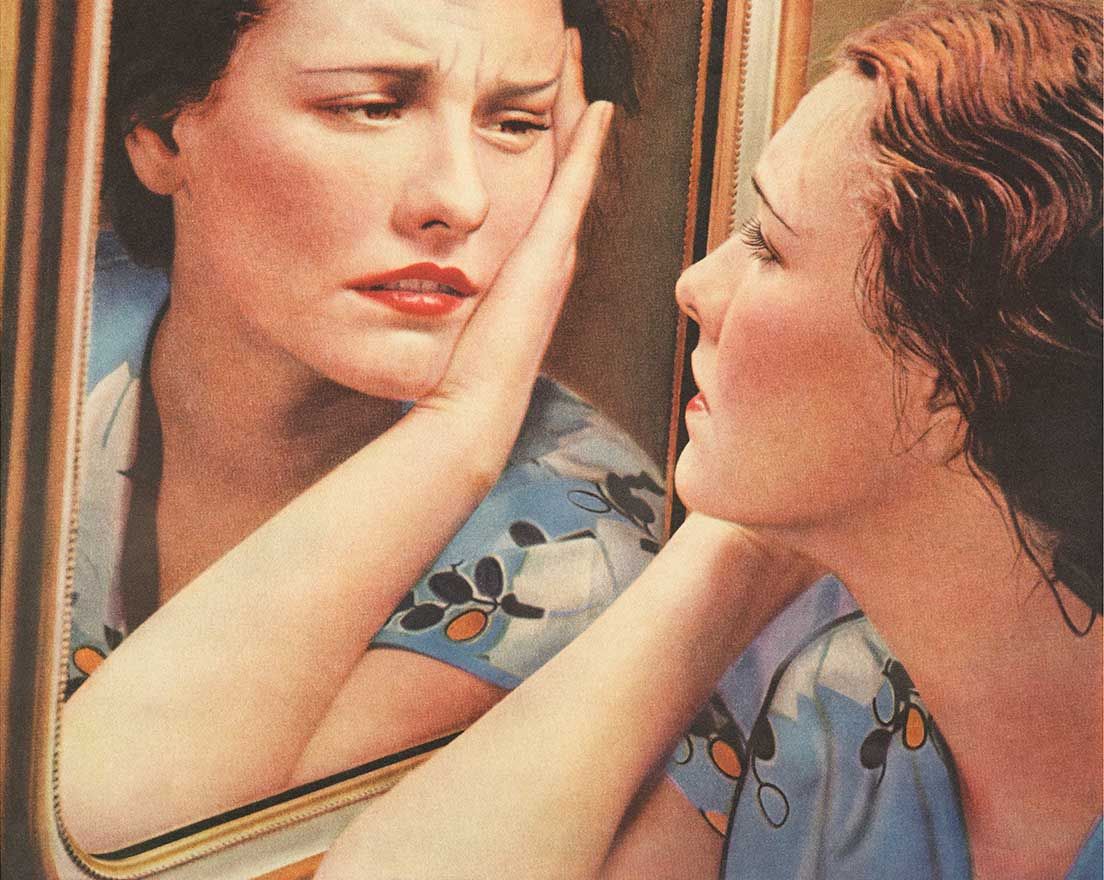 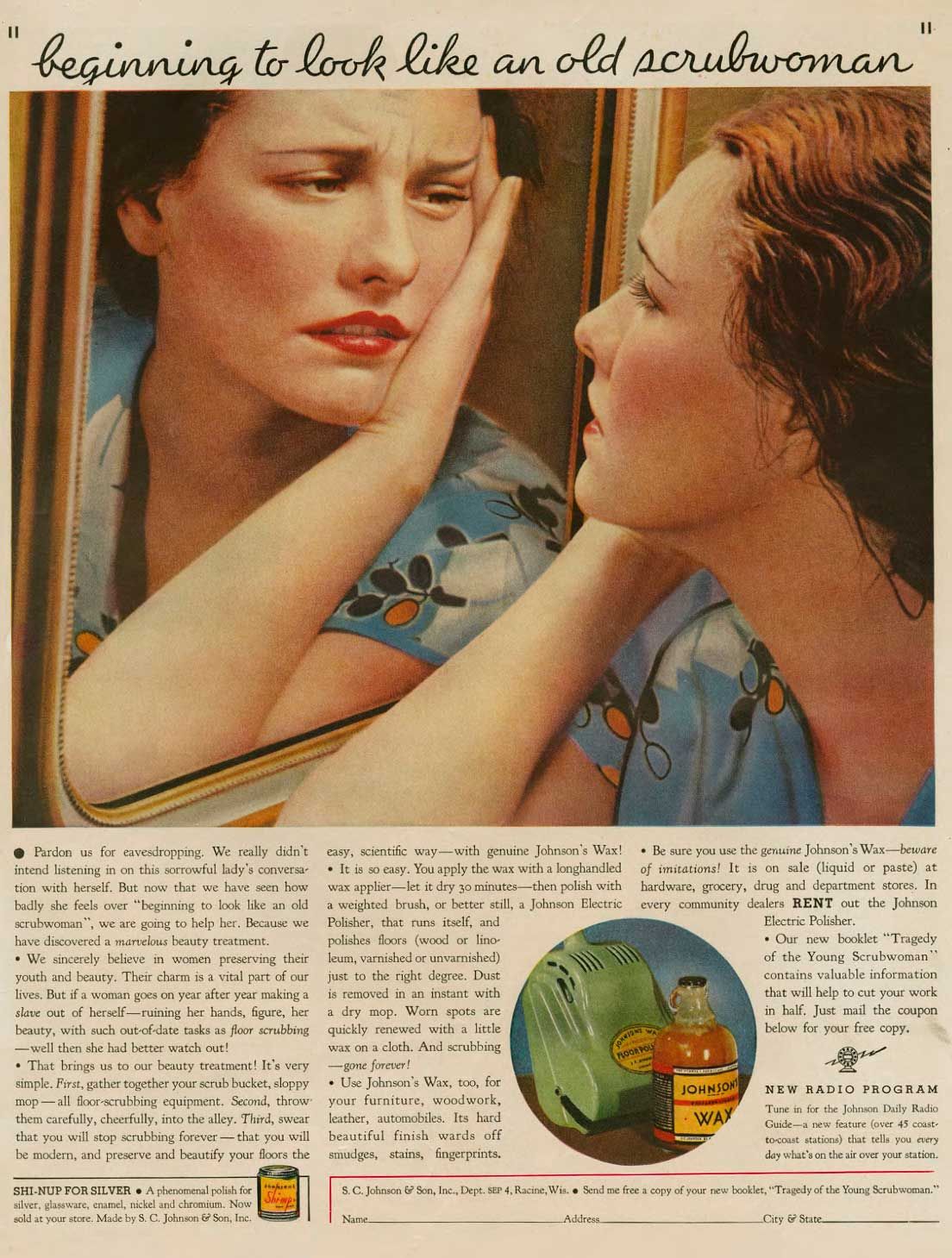 ‘Wipe Away the Years’

She's very agitated about her aging face, and only gradually do we learn from the copy that the cure is Johnson's wax, which saves skin and hands from wear and tear. "It totally reminds me of that Dorothea Lange photo," Thomas says, "and it actually predates it." 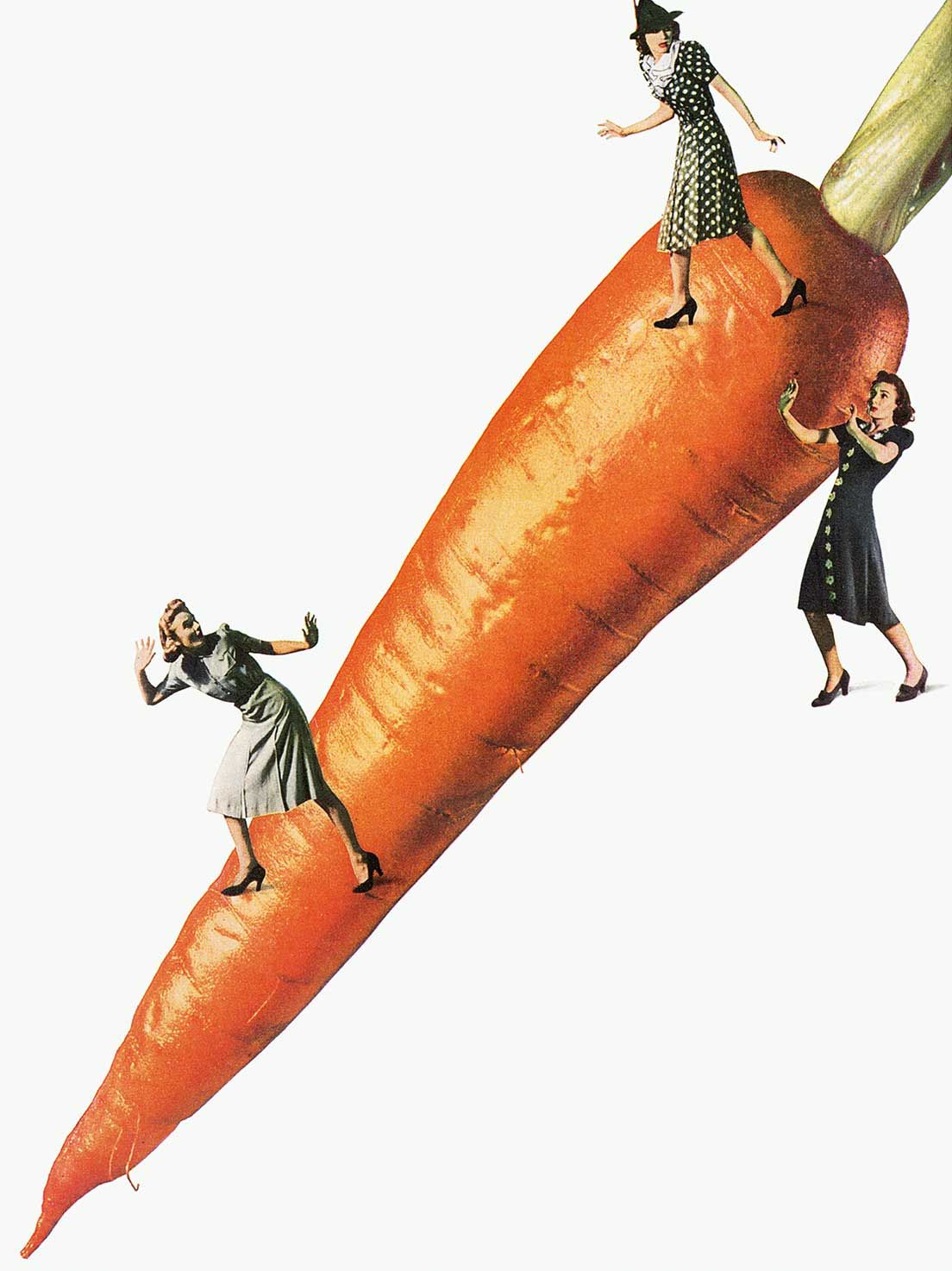 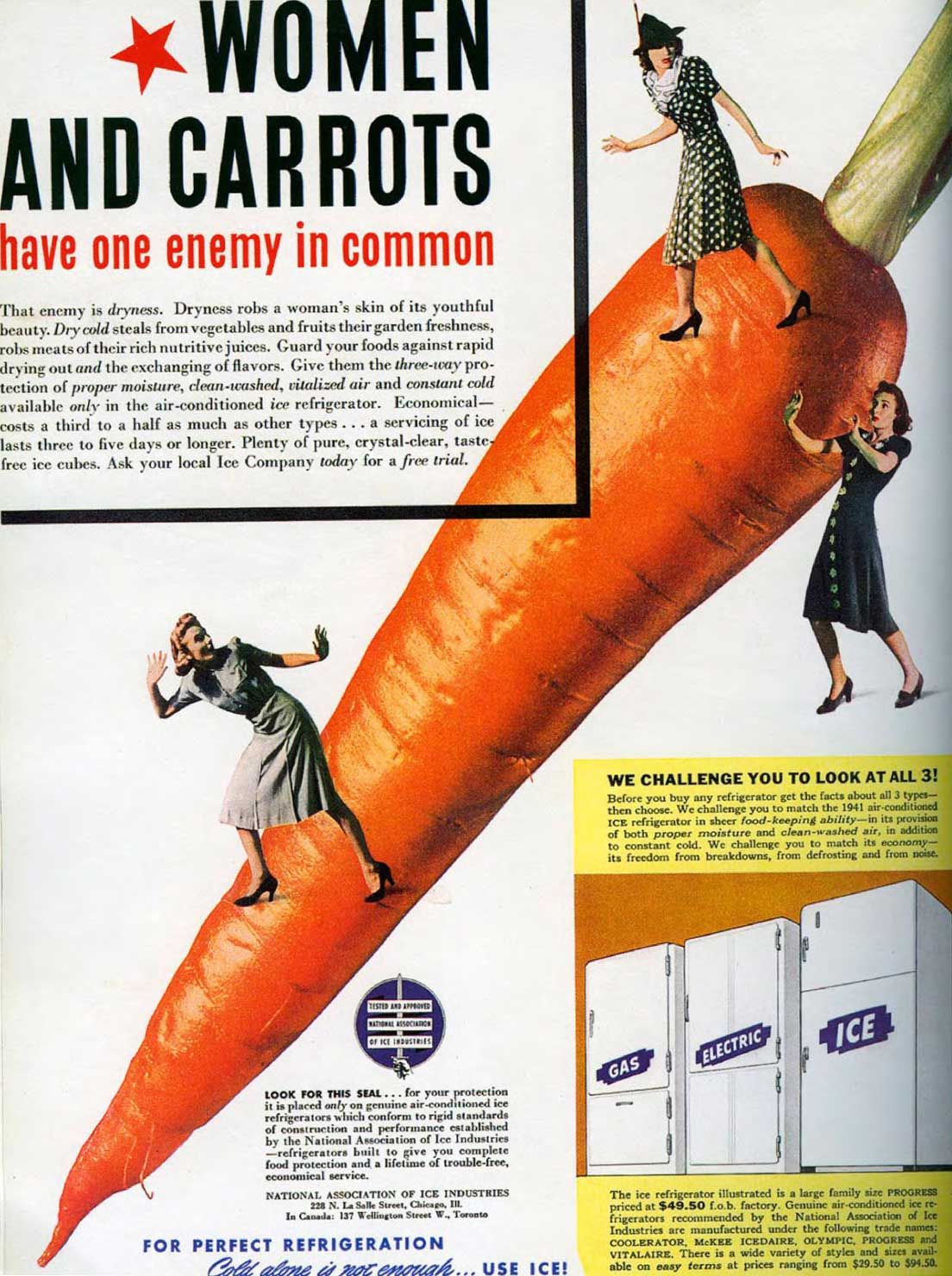 It's an absolutely bizarre illustration without the accompanying copy. But even with the text, it's pretty weird: "Women and carrots have one enemy in common. That enemy is dryness." It's hard to tear your mind away from the easy reading. After all, these ladies are reeling as they size up a carrot, with their hands spread apart just so. But bear in mind that it's 1941: It could just as well be a bomb. 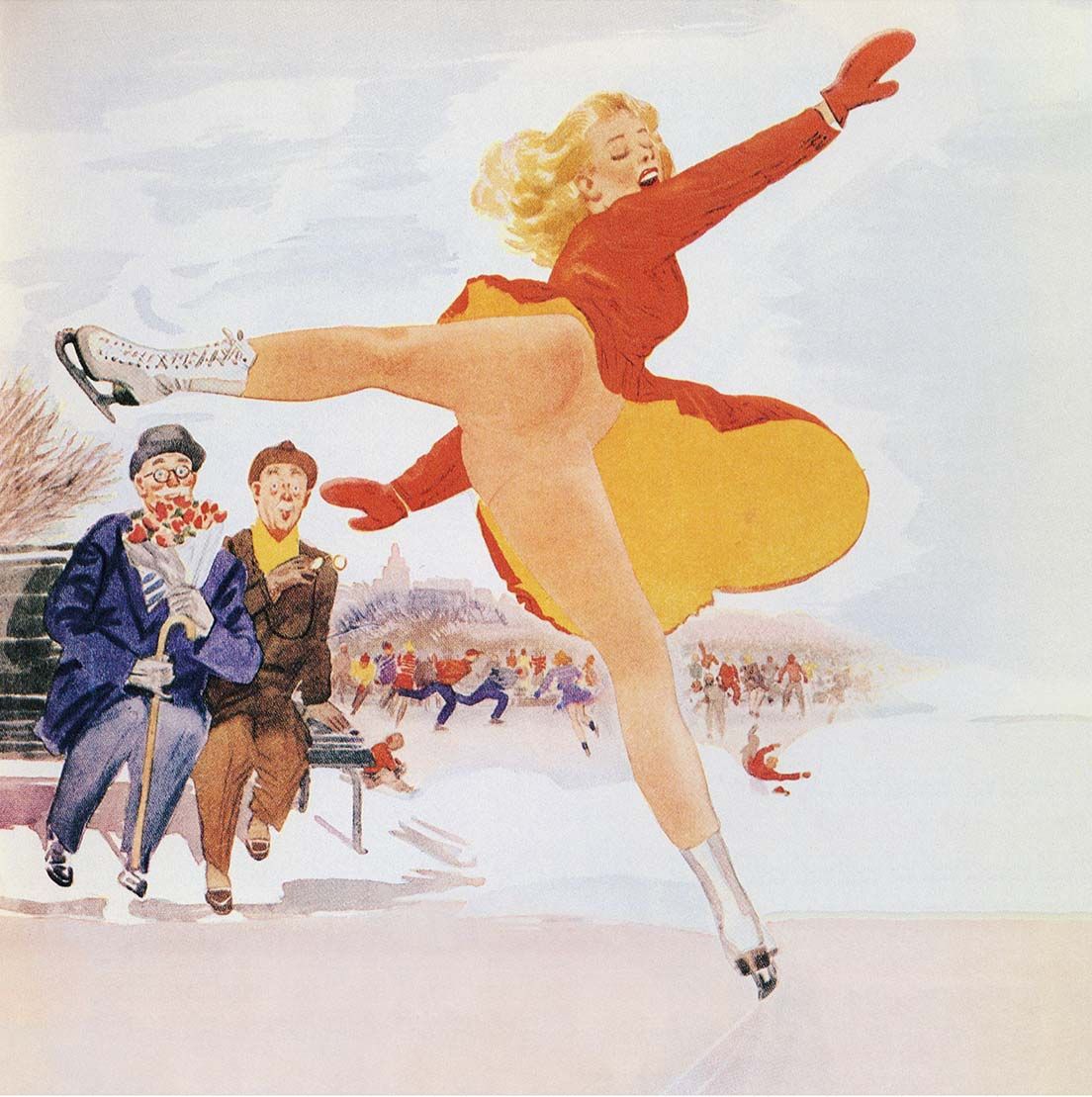 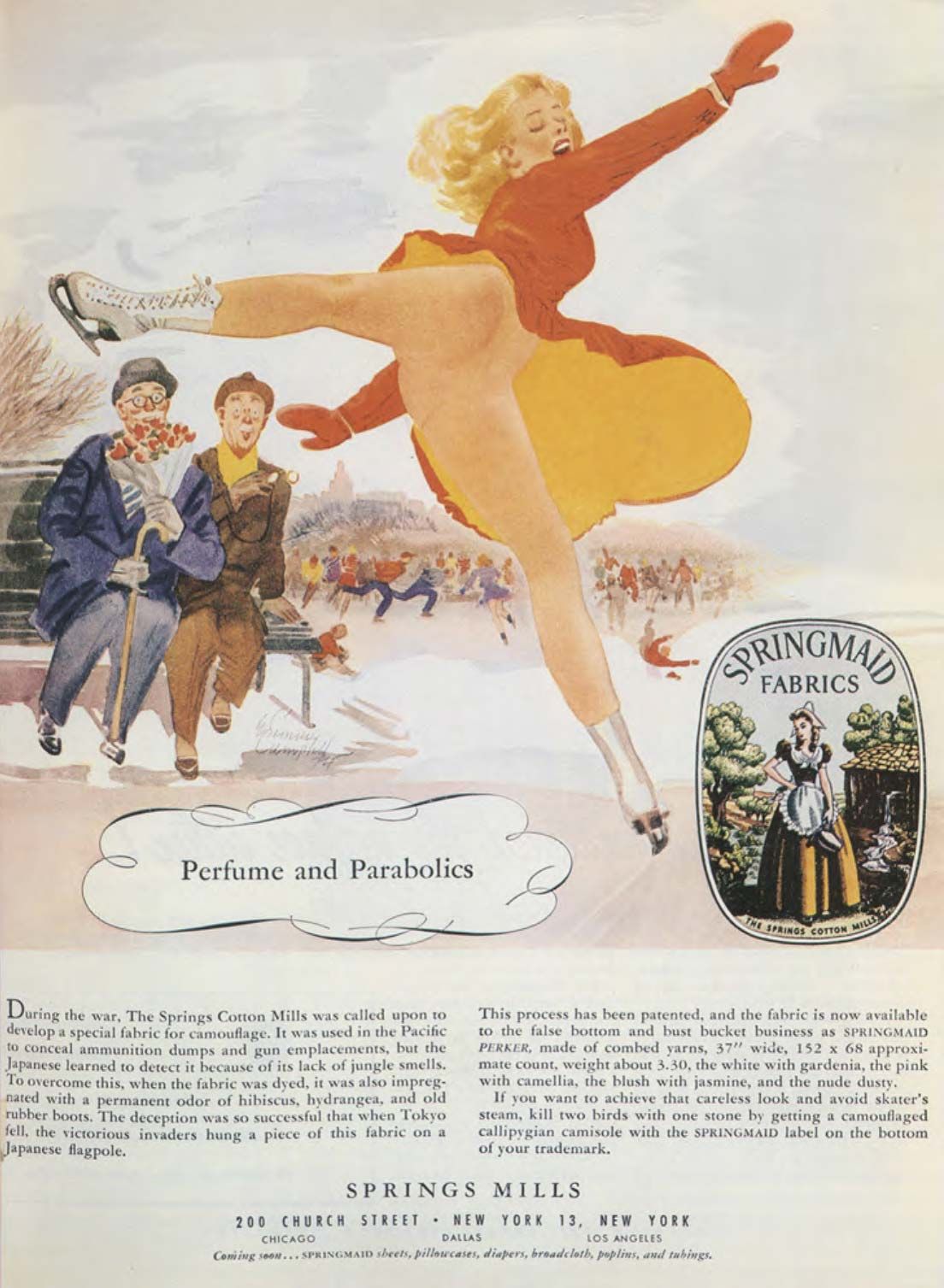 "It's so overt," Thomas says when he looks at this one, and it's hard to disagree. The image advertises a new fabric with two qualities: the ability to camouflage ("It was used in the Pacific to conceal ammunition dumps and gun emplacements") and a pleasant scent ("impregnated with a permanent odor of hibiscus"). The more you look, the more appalling it gets: Check out the leering old guy with his nose stuffed in a bouquet of roses. And it's being promoted for the "false bottom and bust bucket" trade, a phrase intended (presumably) to describe women's undergarments. 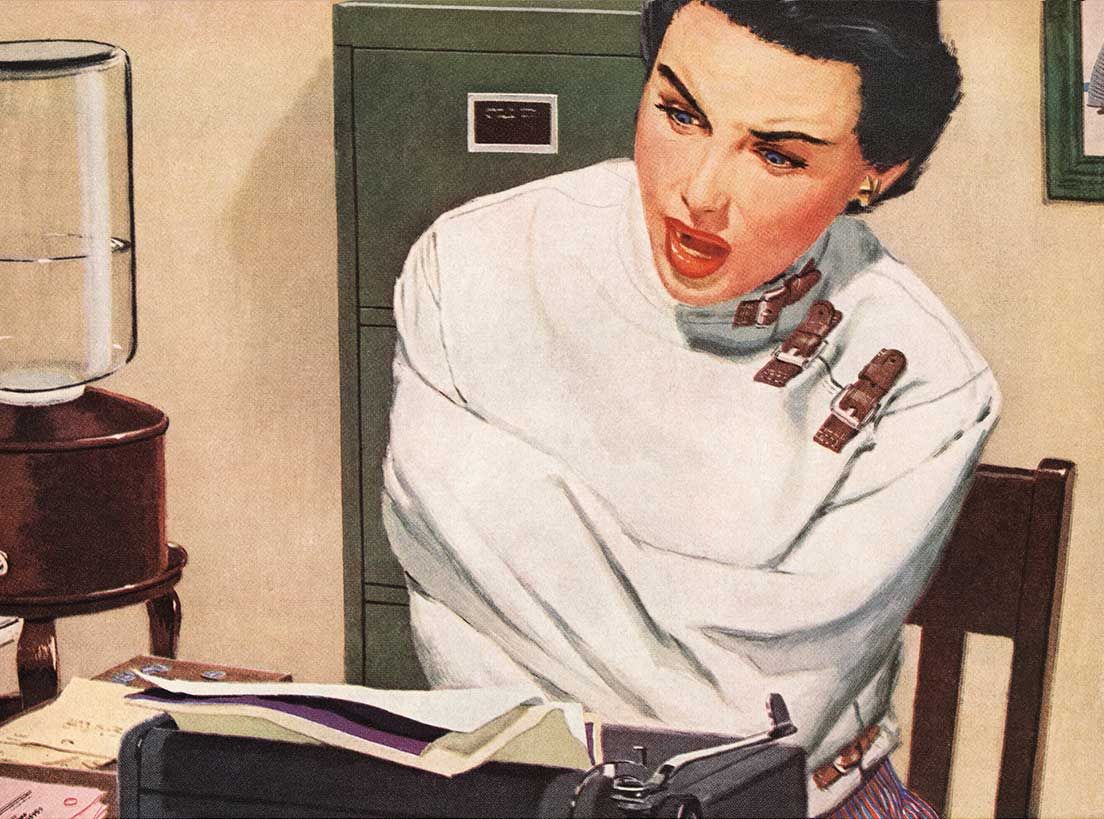 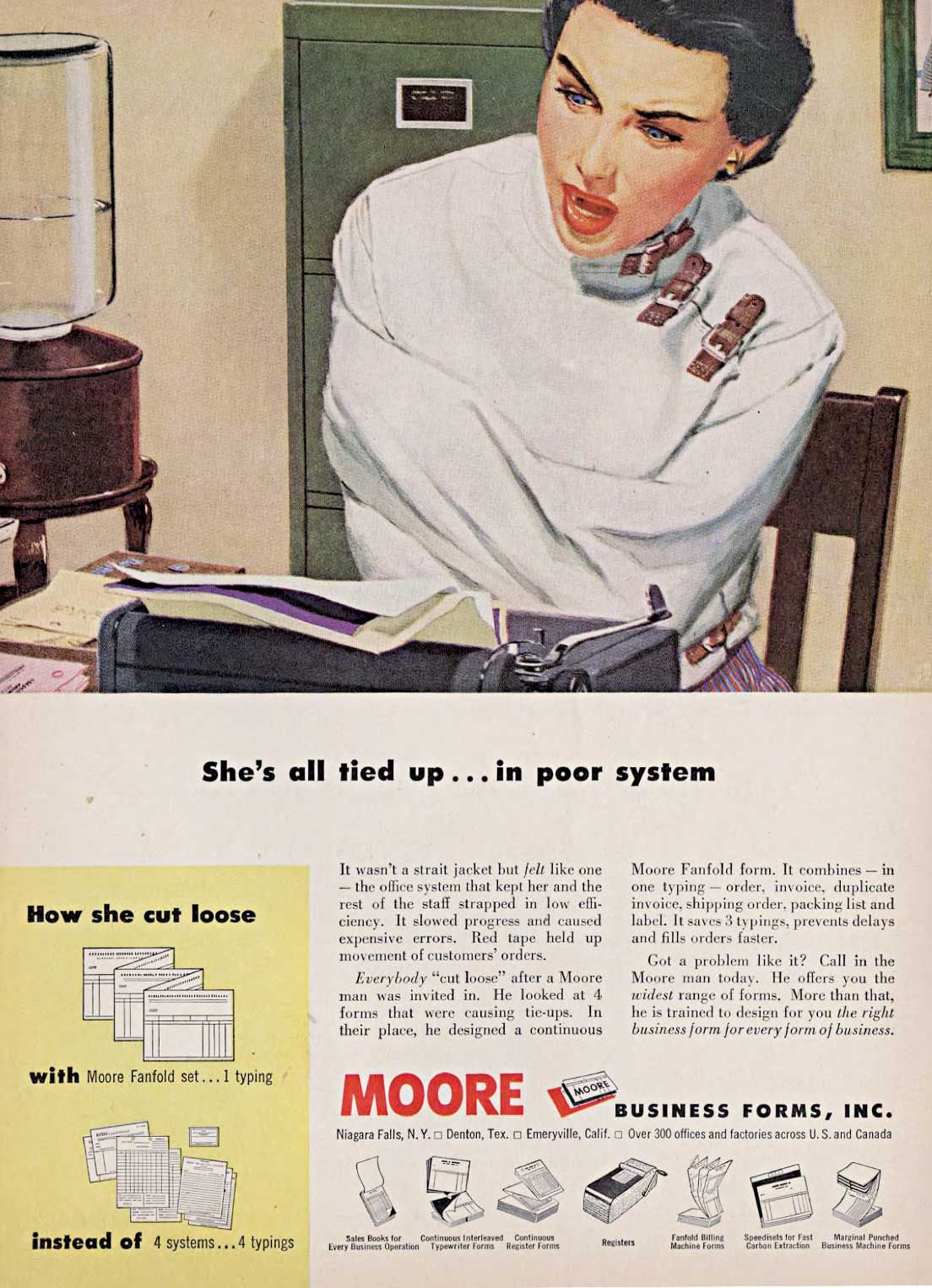 After the war, the working women in these pictures shift from Rosie the Riveter jobs to secretarial work and the like, almost always in support of men. The boss goes unseen in this ad for business forms, "and she's being driven crazy by the workplace — but of course he isn't." 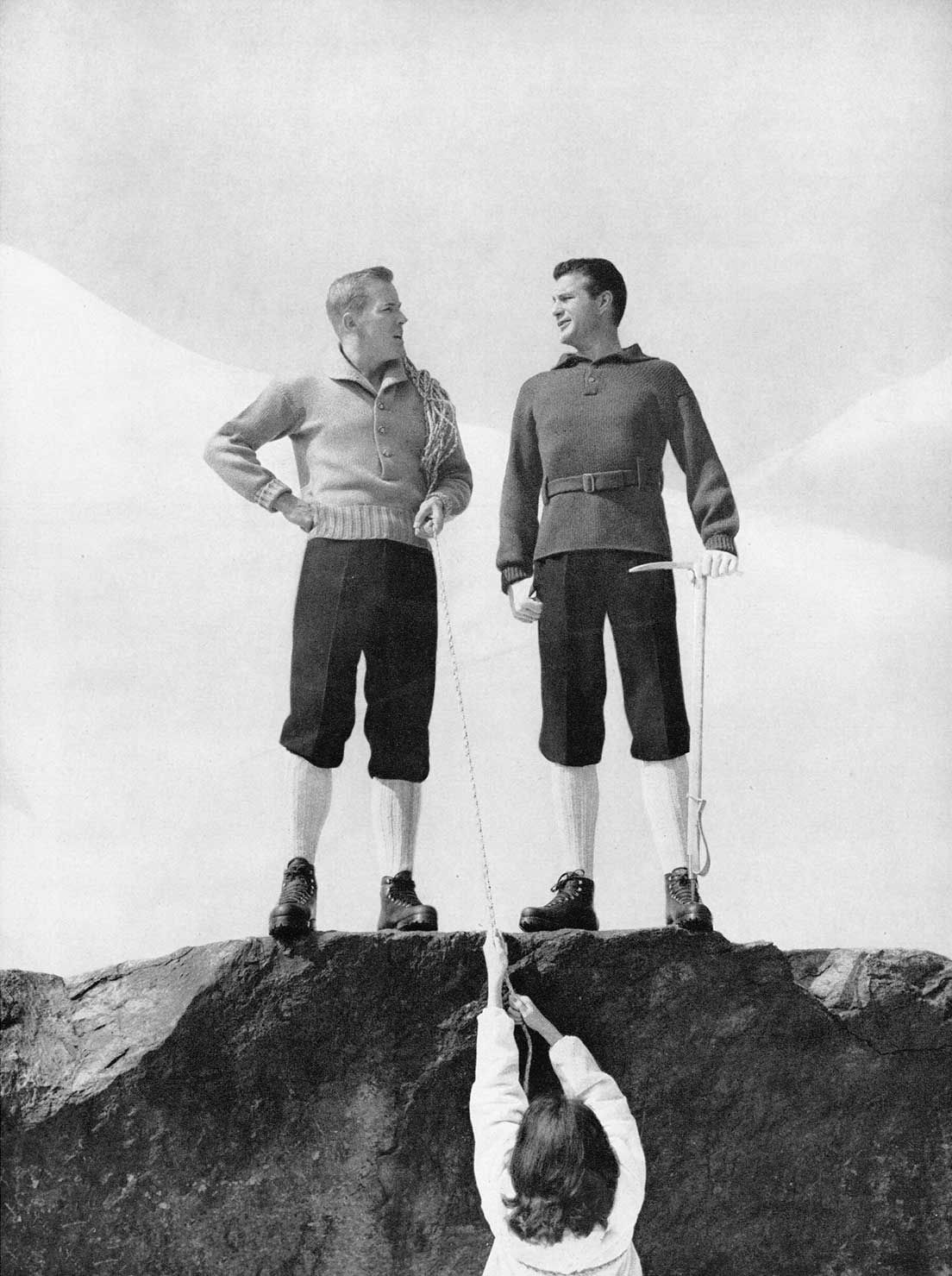 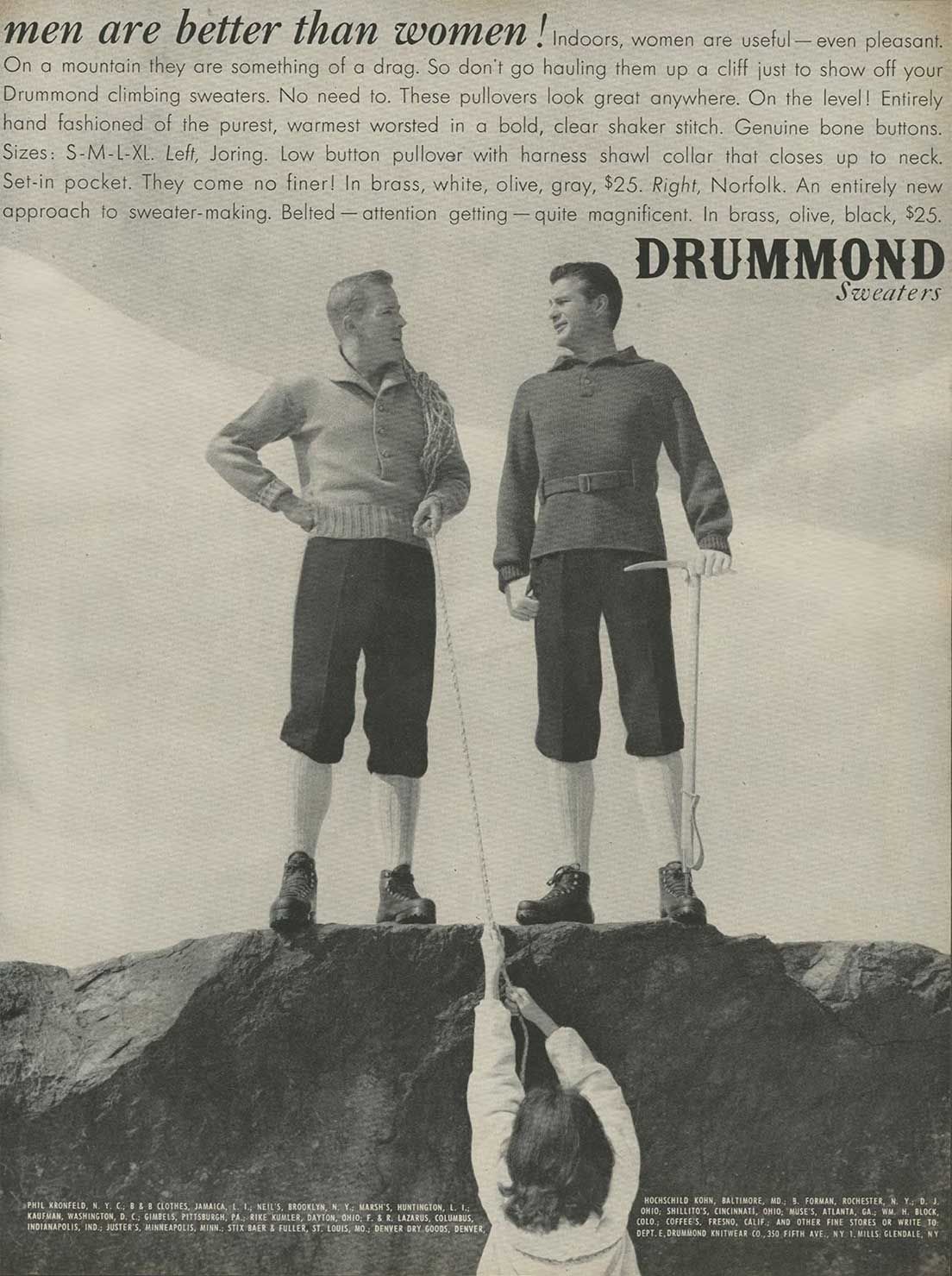 ‘She’s Somewhat of a Drag’

This one speaks for itself: She's hanging off a cliff, and the guys are a lot more interested in each other. "I see some Brokeback Mountain there," says Thomas, and he chuckles as he reads the copy: "Indoors, women are useful — even pleasant. On a mountain, they are something of a drag." 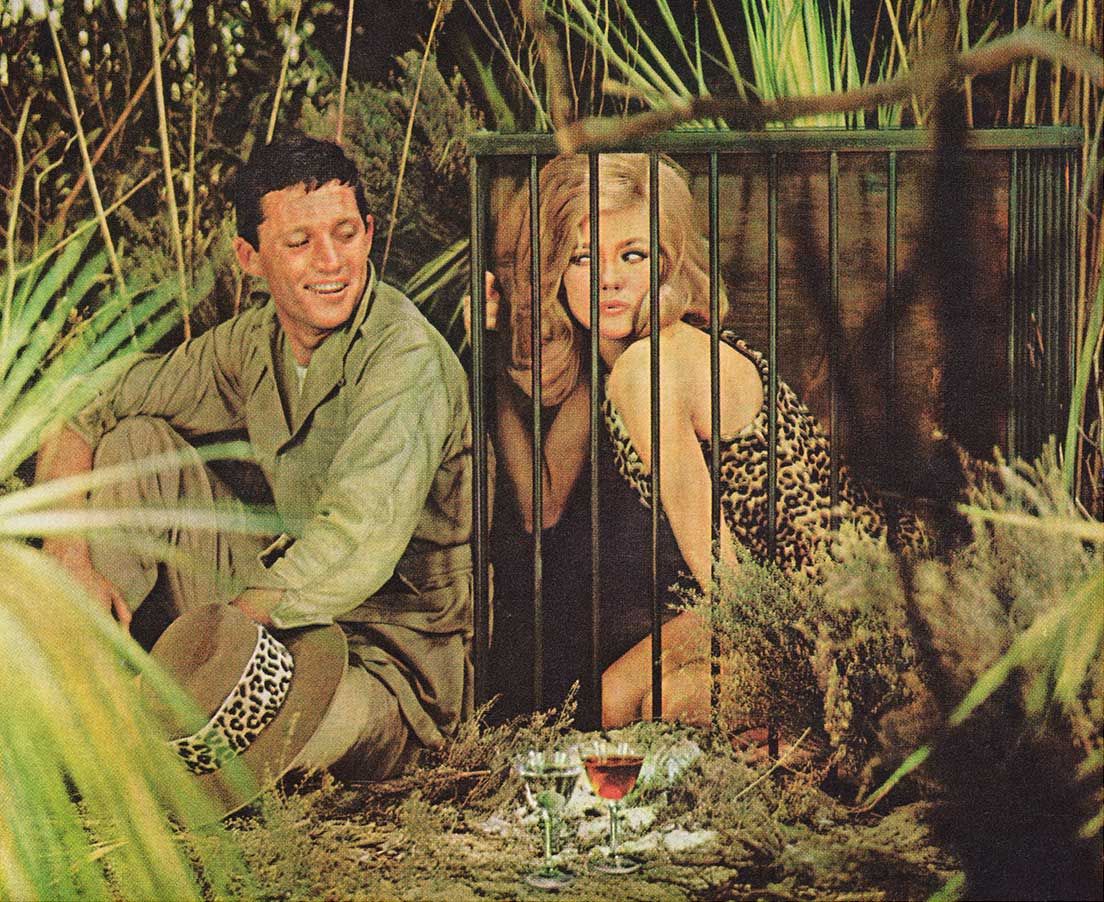 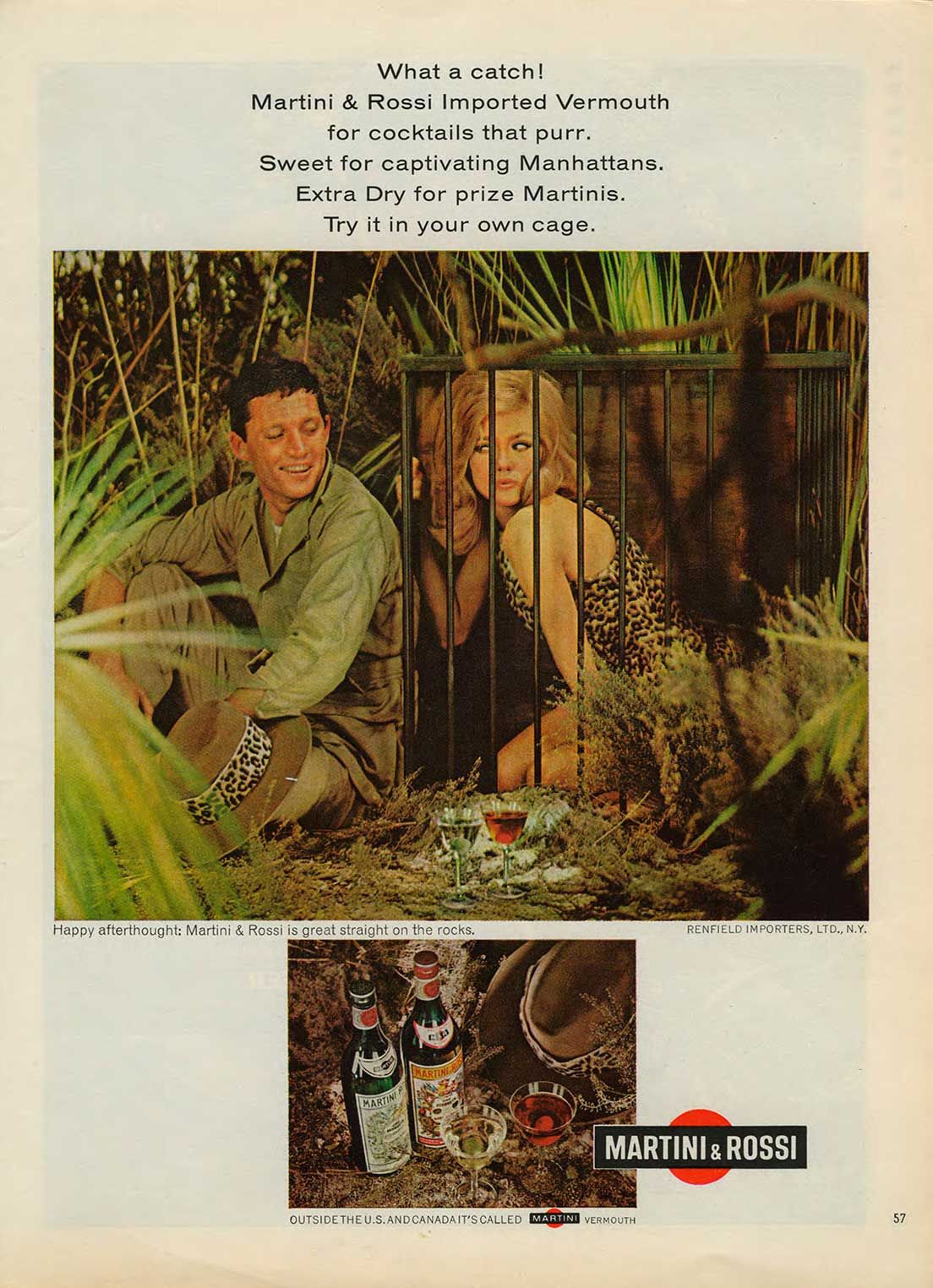 ‘The Taming of the Shrewd’

In this ad for Martini & Rossi vermouth, the pretty young blonde is somewhere between pet and possession. "If they can treat people that way who are seen as so valuable in society," Thomas offers, "imagine how they treat everyone else." 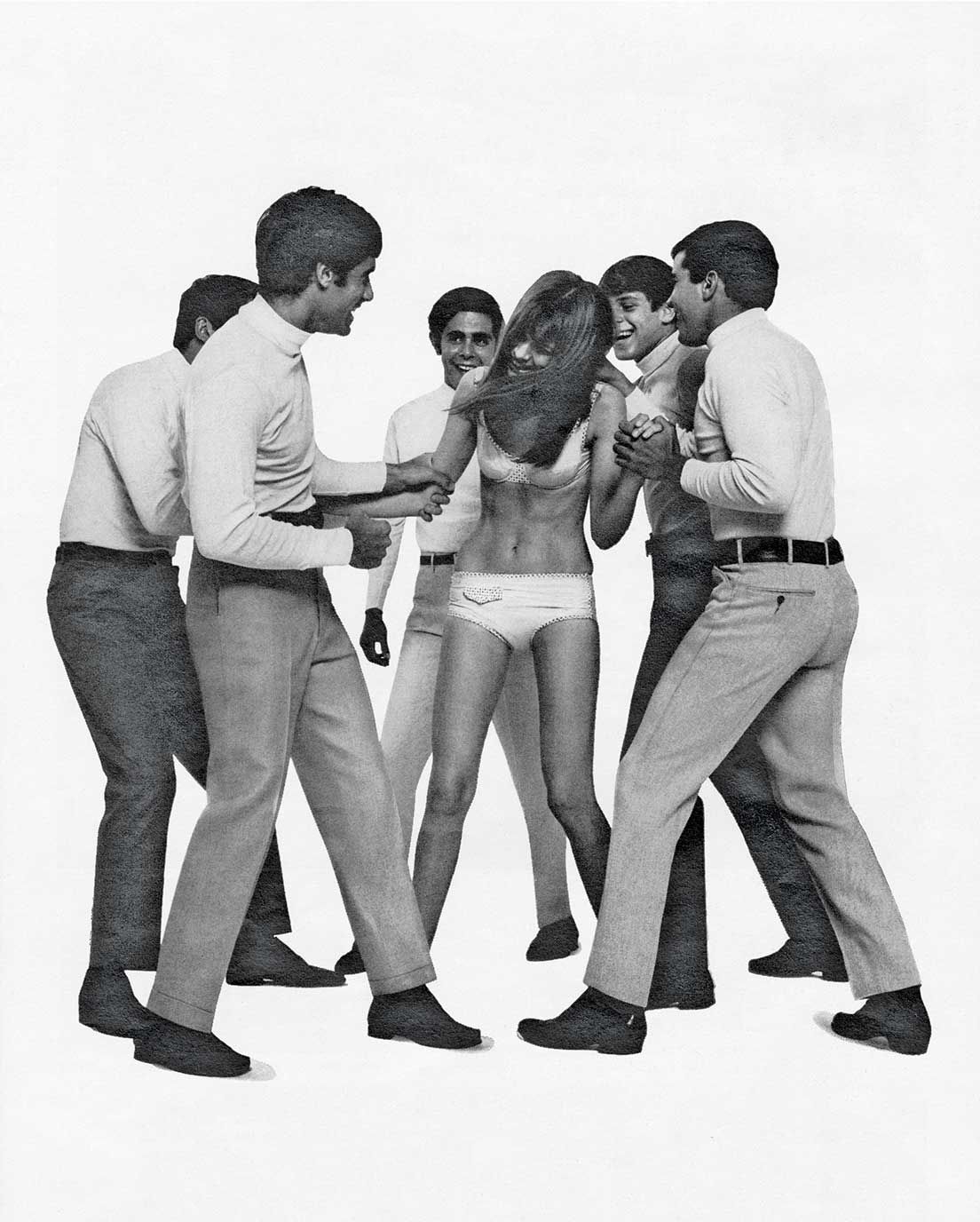 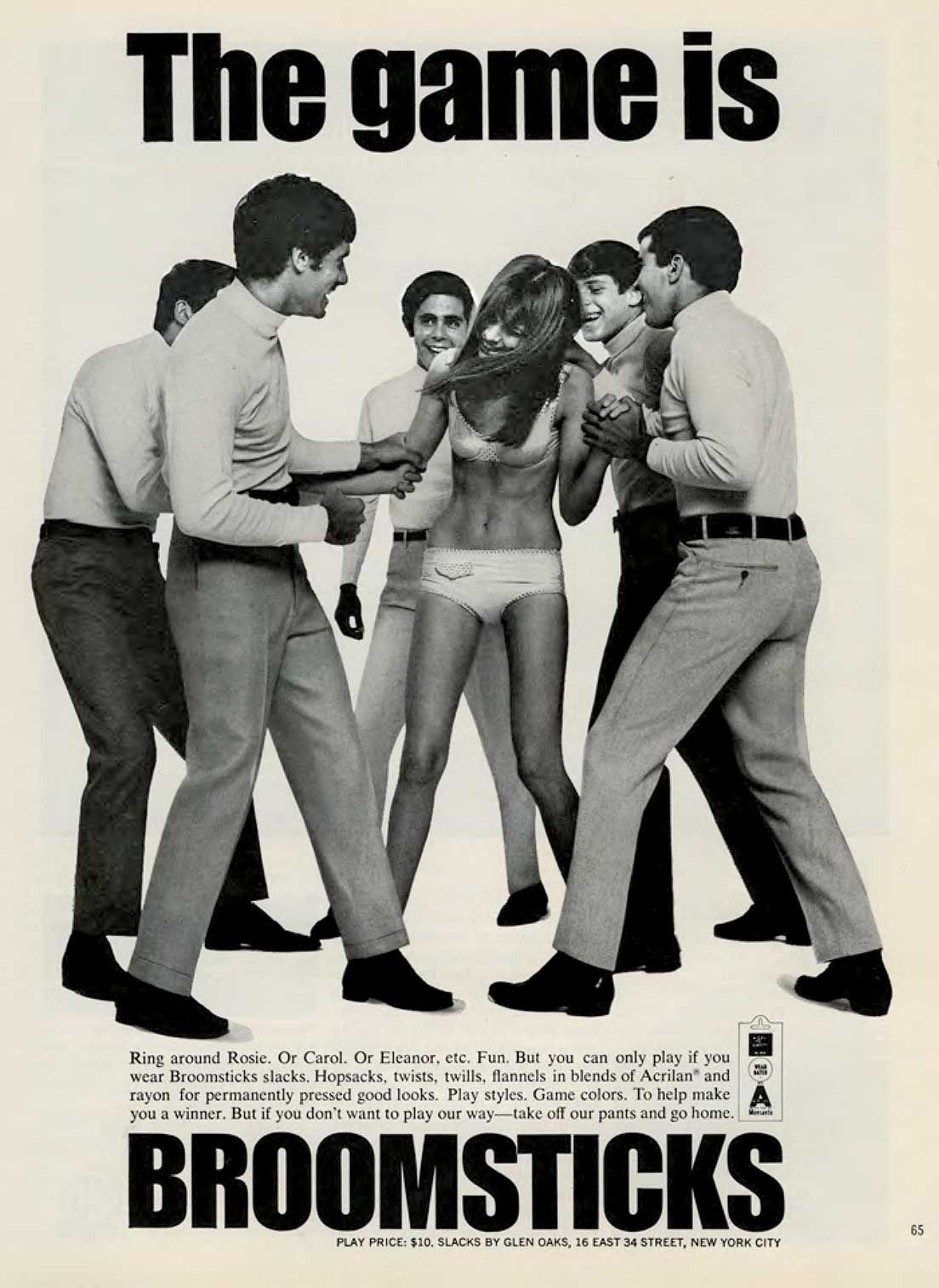 Thomas says he was uneasy about using this photograph, which once advertised a line of pants called (of all things) Broomsticks. "I mean, this is not the kind of image I want associated with me." He adds that one recent viewer made a chilling observation: "At least she's smiling." 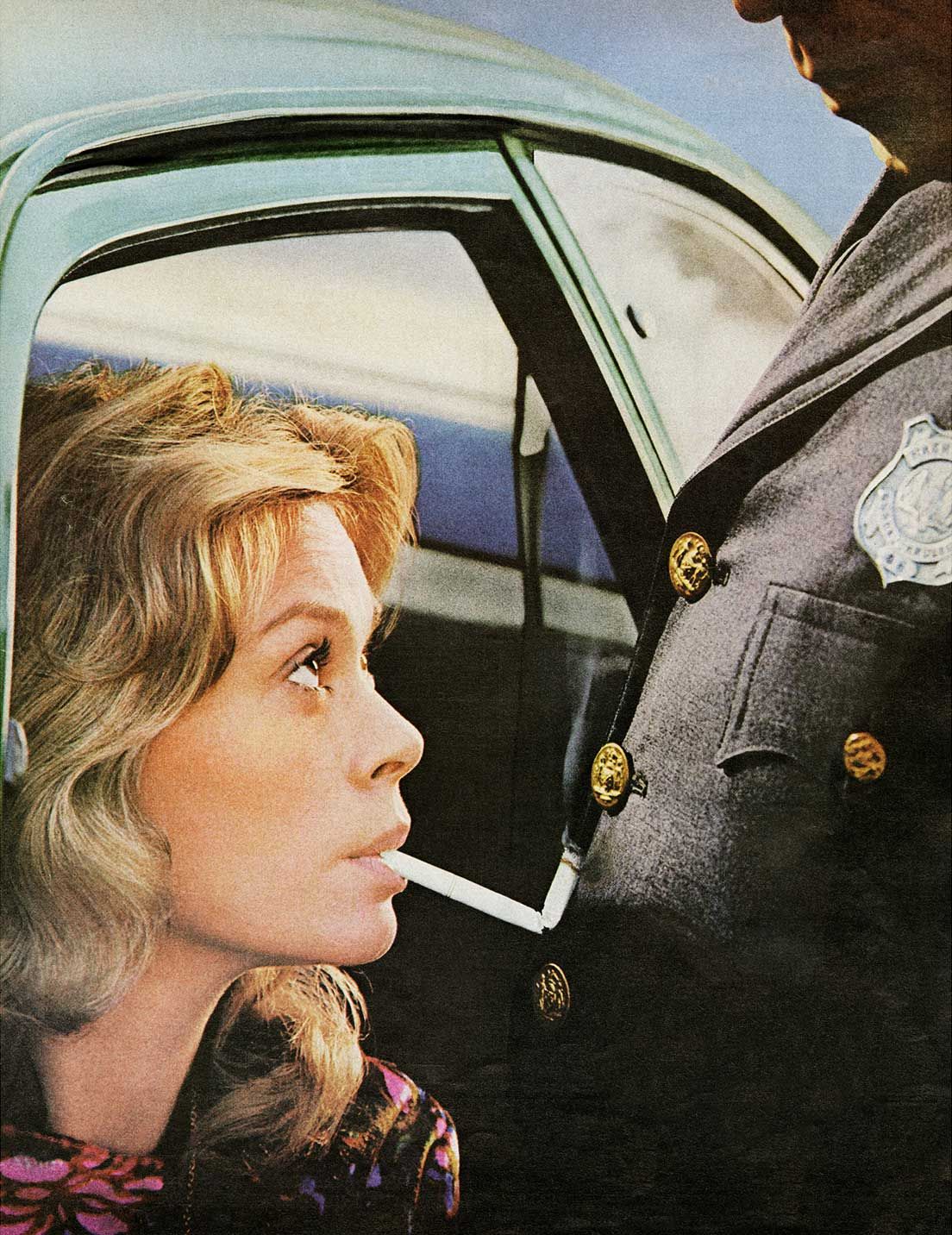 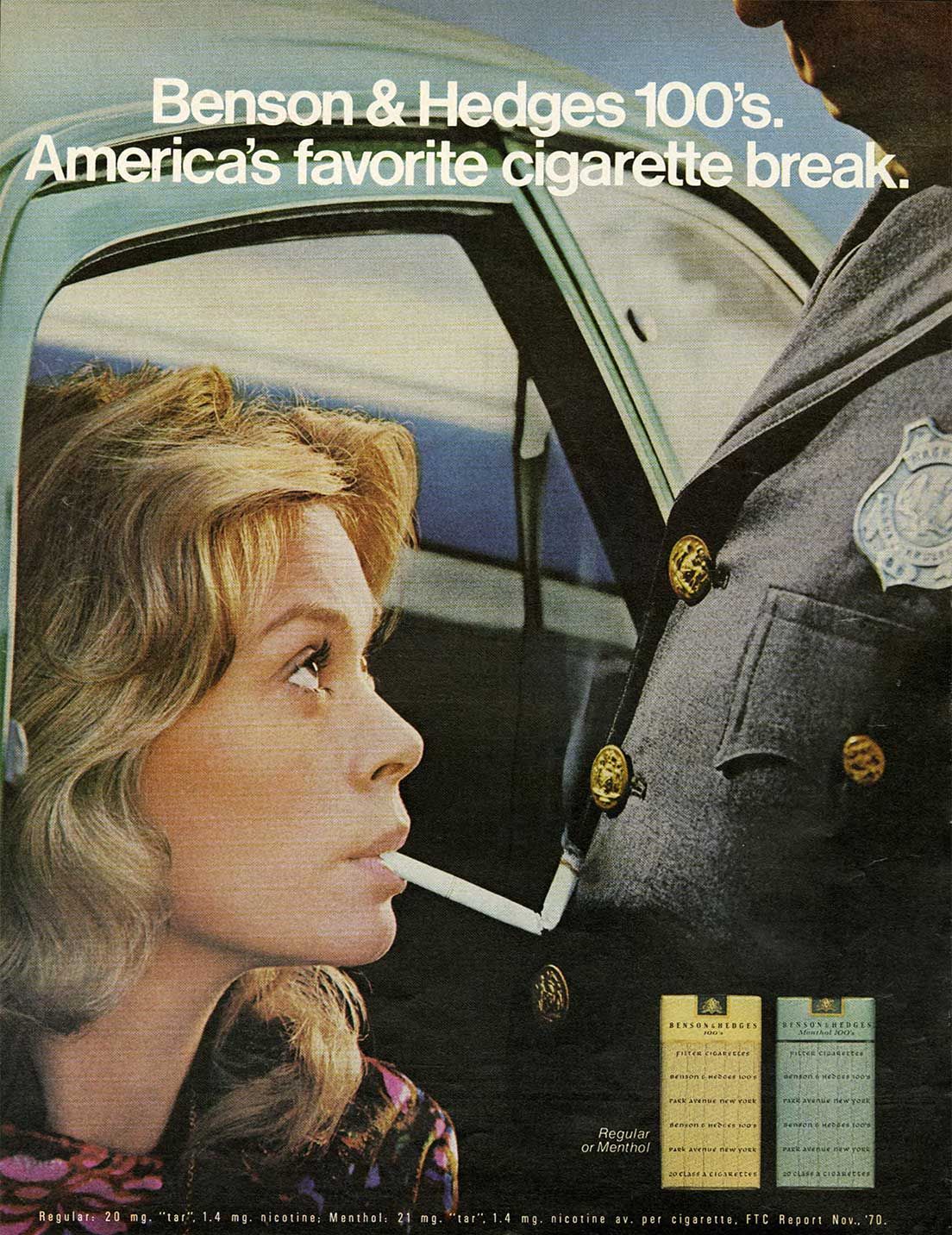 ‘I Was Trying to Be Sophisticated and Then This Happened’

This was one of a series: Benson & Hedges was jokily demonstrating the extra length of its 100-millimeter cigarettes by showing them snapped off in a variety of contexts. But this particular image is pretty clearly about an extra way she might avoid a speeding ticket. The cop makes it a fraught image for 1970, right in the thick of the counterculture-protest years. "Just as black people were being brutalized in the streets," Thomas notes, "women are being butchered in the ads." 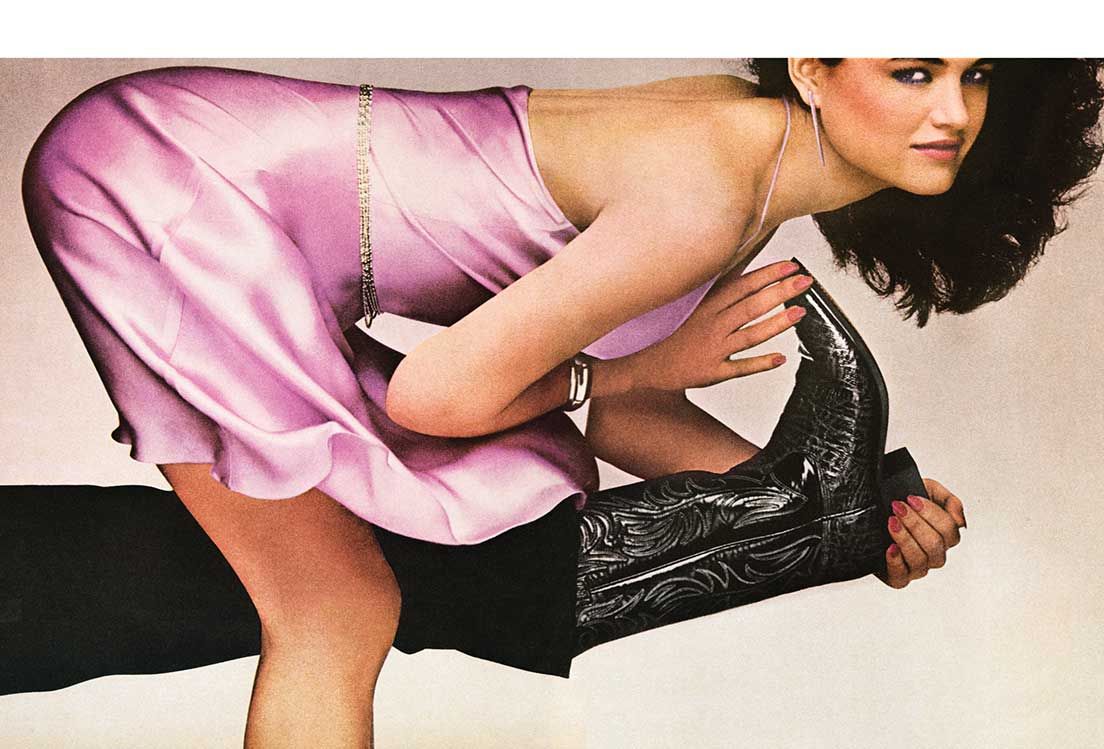 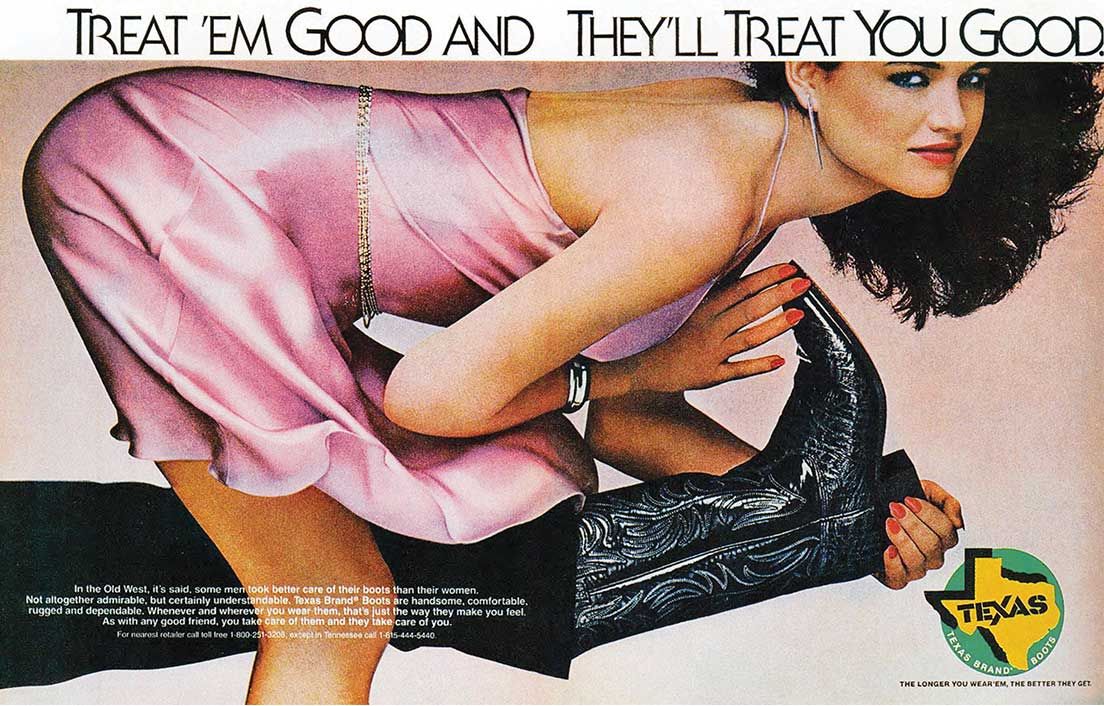 ‘And They’ll Treat You Good’

In this ad for Texas-brand boots, published in the era of "Who Shot J.R.?," the power dynamic was the thing. "Cowboy boots are part of being a man, and she's taking off the boot — she's in control. But she's riding it, and it's an extra-long leg. A black leg."

*This article appears in the April 6, 2015 issue of New York Magazine.

Without Words, These Ads Speak Even More Loudly