In honor of Bikini Kill’s Kathleen Hanna, Boston mayor Marty Walsh has signed a proclamation that today, April 9, is officially known as Riot Grrrl Day. According to the official decree, the day was put in place to “commemorate, celebrate, and actively promote the cultural significance of riot grrrl culture, and to inspire grrrls everywhere to shake up the status quo and create.” 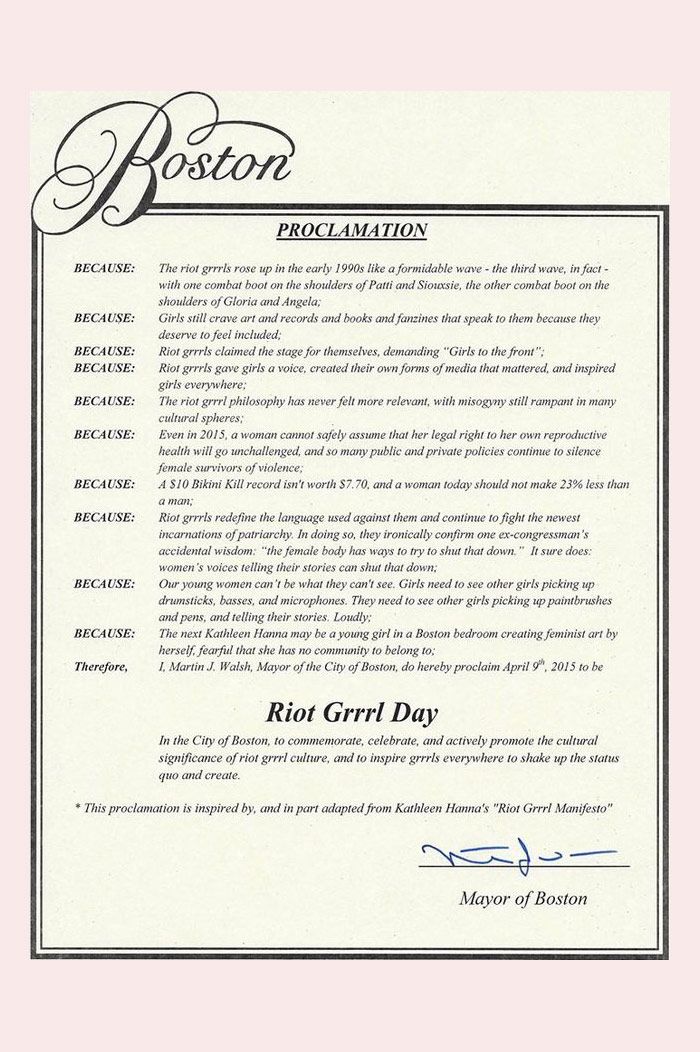 While other cities have yet to catch up and implement this day, you can observe the holiday wherever you are. (As far as we can tell, there is no reason whatsoever why the festivities should be limited to Boston.) Take the day off work to assemble a zine, pull together an all-girl band, wish everyone you see a “girls to the front!” and dance around to the official holiday anthem:

And How Will You Be Celebrating Riot Grrrl Day?

celebrity 4:37 p.m.
Hayden Panettiere Calls Giving Up Custody of Her Daughter ‘Heartbreaking’ “It was the worst, signing those papers.”
obsessive tester 4:00 p.m.
21 Hand Creams You Probably Need Right Now Because you’ve been washing them incessantly.
By The Cut
transgender rights 3:32 p.m.
Virginia Students Walk Out in Protest of Anti-Trans Policies Students at over 90 public schools are protesting the governor’s proposal to roll back transgender rights.
celebrity 2:13 p.m.
Elizabeth Chambers Allegedly Tried to Expose Armie Hammer in the Press A friend says Hammer’s estranged wife used her email to leak rumors about him to the press.
power 12:35 p.m.
Women Across Iran Are Protesting the Morality Police Following the death of Mahsa Amini in police custody, women are burning their hijabs and cutting their hair in the streets.
holiday gifts 12:15 p.m.
46 Christmas Gifts for Any Kind of Mom Whether she’s into cooking, skin care, gardening, or relaxing.
By the Cut
gender reveals 11:01 a.m.
Another Gender Reveal Ends in Environmental Disaster A couple in Brazil may have contaminated one town’s water source by dyeing a 60-foot waterfall blue.
gone sale-ing 10:02 a.m.
Saks’ Friends and Family Sale Will Make You Look Forward to Winter Puffer coats, boots, and knitwear, all on sale.
cut chat 10:00 a.m.
Every Thought We Had Watching Don’t Worry Darling For starters, it was definitely a movie.
how i get it done 10:00 a.m.
How Manicurist Jin Soon Choi Gets It Done During Fashion Week “If one hour before the show we still have models to do, my heart starts pounding. I want everything done without any delay or drama.”
By Danya Issawi
dream date 9:00 a.m.
A Hot Time With Harris Dickinson The Triangle of Sadness star reimagines what it means to be a modern man between sauna steams.
By Hanna Hanra
encounter 8:00 a.m.
17 Seconds With a Spotted Lanternfly Face-to-face with the stylish invasive species. So do I smoosh it or not?
By Matthew Schneier
at home in asian america 8:00 a.m.
For Domestic Workers, the Asian Class Divide Begins at Home Five nannies from the Philippines, Nepal, and China open up about what it’s like to work for their Asian American employers.
By Arya Sundaram
ambition 7:00 a.m.
Even Kelly Ripa Has to Deal With Sexist Bulls- - - at Work As the Live! host writes in her new collection of essays, seniority is a “masculine word.”
crime Yesterday at 5:19 p.m.
A Train Hit a Police Car With a Woman Handcuffed Inside She survived, though her attorney wonders why Colorado officers left their SUV parked directly on the tracks.
mfw spring 2023 Yesterday at 5:19 p.m.
The Best Street Style at Milan Fashion Week Chic looks from this fashionable city.
royals Yesterday at 4:43 p.m.
The Palace Is Reportedly Panicking About The Crown Again Royals are concerned the upcoming season will damage King Charles’s reputation.
all in the family Yesterday at 3:33 p.m.
Untangling the Secrets of a Teenage Mother We think of our parents as known quantities. But as Salon editor-in-chief Erin Keane writes in her memoir, Runaway, we rarely know the whole story.
mental health Yesterday at 3:15 p.m.
Megan Thee Stallion Wants to Help Hotties Get Therapy “Bad Bitches have bad days too.”
culture Yesterday at 11:57 a.m.
Why Is Hollywood Still So Obsessed With The Stepford Wives? Don’t Worry Darling wears its references to the cult classic on its sleeve.
More Stories