“Hey, everybody!  — oops!” An innocent automotive fumble causes the wipers to graze our Prius windshield. “Um, so we’re going to the Secret Jim Morrison Cave, and I just wanted to let you guys know that we’re on our way. Hey, Ecuador! What’s the cave all about? The cave is a secret cave in Corral Canyon, it’s really fun and beautiful and has beautiful views, and it’s the only place I get reception up there. So that’s really great for all of you guys. Hi, Panama!”

The woman in the driver’s seat is addressing her dash-mounted iPhone 5S as she waits at a stoplight in Santa Monica on a recent morning. Her name is Amanda Oleander. She’s 25 and upbeat and a Sagittarius, and since moving to Los Angeles two years ago, she’s worked as a freelance artist, an illustrator for E! Online, the director of client relations for a fledging app developer, and an extra in The Hunger Games. Perhaps most significantly, and definitely most randomly, in early April she was enjoying her status as the “most loved” person on the new social-media platform Periscope.

Meerkat, Periscope, and Broadcasting Your Life

A mobile app that allows users to stream live video to any number of Earthlings who wish to watch, Periscope was purchased by Twitter in January for just south of $100 million and kept in beta until March 26 — the day its earliest adopters simulcasted the East Village gas-explosion fire. You might think of Periscope as webcamming meets Snapchat, with masturbating girls and dick pics replaced by rambling thoughts and quotidian walks. (Nudity is banned.) Transmissions can be saved and viewed by curious parties for up to 24 hours. But the real fun is getting a notification during, say, a nightcap in New York and channel-surfing directly to Hong Kong, where someone is dashing through a verdant alley to lunch, then to Belo Horizonte, where a friend is detailing his morning-smoothie ritual. It’s an around-the-clock DIY reality show, a selfie network.

A few seconds after @amandaoleander opens Periscope, hundreds, sometimes thousands of people elect to have their phones taken over by a broadcast of whatever she’s doing. This boils down to time spent with an attractive young lady learning the ropes of a big city alongside a horde of invisible onlookers, whose presence is made known by a ticker of text chatter and the cartoonish flutter of colored hearts. One day she’s shooting the breeze or painting in her Mid-Wilshire studio. On another, she’s giving tours of L.A.’s most obvious attractions. This week began at LACMA, then the Griffith Observatory and the Grove. Now on to Malibu.

“You have to tap if you like what you’re watching.” She’s explaining the economy of hearts as we cruise up the Pacific Coast Highway, pecking her finger in the direction of Santa Barbara. “That’s how you go up in the most loved.” In the Periscope caste system, hearts are more important than followers. When we met earlier this month, Oleander had 2 million hearts. By last Friday, she had more than 5 million. Every new user is encouraged to follow the most-loved scopers, and, as of yet, no celebrity has reached Oleander’s level of cardiac acclaim. (She’s also the only woman in the top ten.)

When Oleander joined the app, the day after it launched, she had around 2,500 Instagram followers — not totally out of the ordinary. But she’s unflappably personable, an outgoing nerd, and she found herself very good at Persicope. You can easily spend the day with her, waking up together, retracing your steps before bed, making plans for tomorrow. She found the sudden attention startling. “I was like, Is this a movie or something?” At least one of her followers feels similarly. The first time I tuned in, @mikebarrone718 sent up a text bubble: “This app reminds me of the movie Her.” Oleander tells me that once she reaches her goal of 100,000 followers, she wants to launch a world tour, meeting and painting with a network of friends she hasn’t met yet.

She usually films herself, but today Oleander’s friend Skye is acting as assistant camera operator from the passenger seat. Safety first. He comments on the comments of the last stream: “Some of these are funny; they’re all like, ‘Where are you from, bb?’ ” Oleander shrugs it off with a giggle as we pull onto the path leading to the trailhead.

Soon we’re in the fabled Secret Jim Morrison Cave, where the Lizard King came to write. About a dozen day-trippers have beaten us here. “Hey, pass that J back!” says one gruff yet chill young woman. She offers the doobie to our gang after her turn. Oleander says thanks but no thanks and “Hey! Do any of you guys know about Periscope?”

“Paradise Cove?” asks another stoned hiker, confusing it with the name of a nearby beach.

“No, Periscope. It’s this new app, and 200 people from around the world are tuning in right now, watching what we’re doing.”

This draws the attention of a third loiterer: “What?!”

Oleander scooches across the rocks to offer her phone by way of demonstration. “It’s the No. 1 app now; if you just look it up, you should see it. You should add me on there.” Lights up, camera on. “Okay. Hi! I’m @amandaoleander, where are you guys from?” Answers begin coming in: Brooklyn, Quebec City, Dubai, Seattle.

“A lot of people don’t know about the cave,” Oleander says to her phone, responding to one of her followers, “but now I guess you’re right, it’s not a secret anymore.” She scans for more queries. One, about a swimsuit, she deems inappropriate and grounds for blocking. To another: “I’m not part of the Illuminati, no.”

Two adult men from Mobile, Alabama, pretended their sock pup­pets were on a blind date 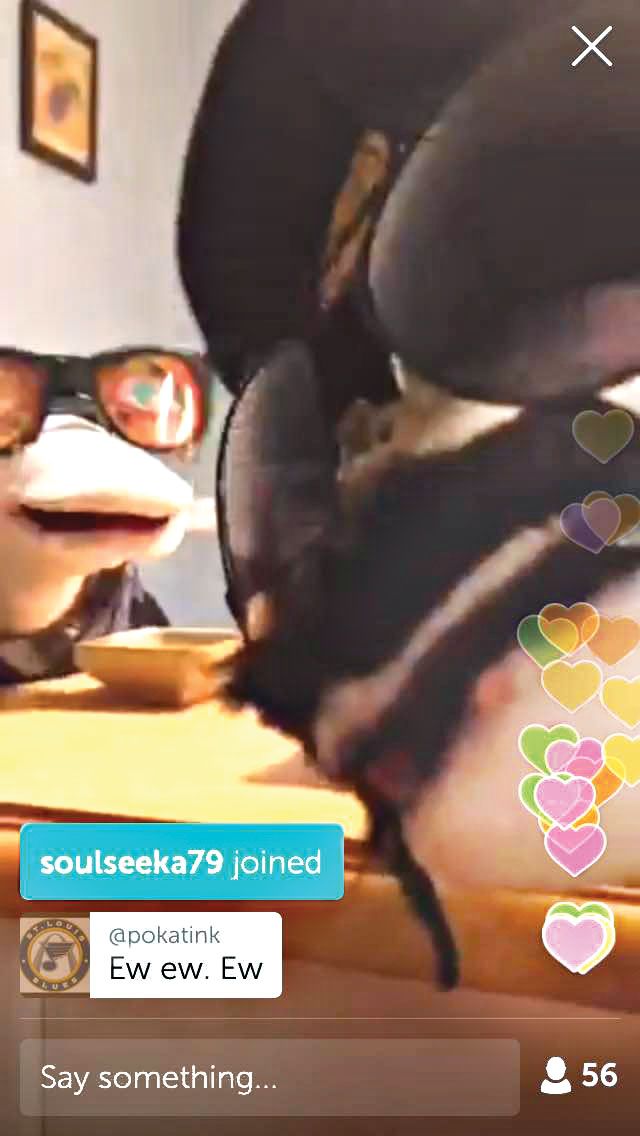 . A girl in a polka-dot dress showed off her one-month-old yellow Lab puppy 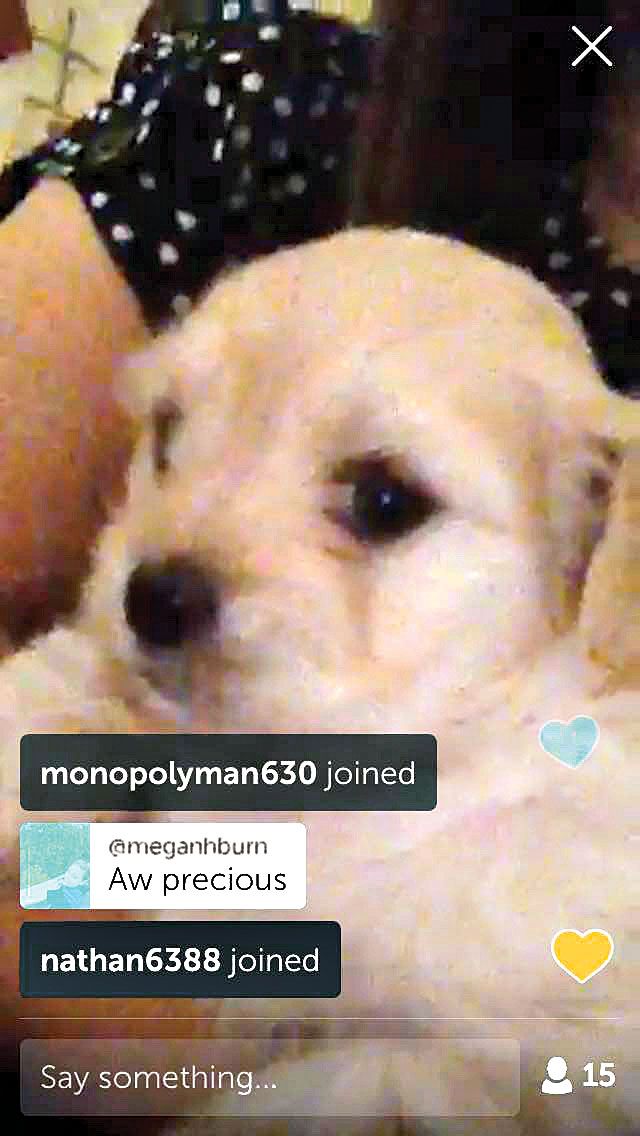 to a chorus of awwws. A man in Brooklyn was courtside at the Nets-versus-Magic game 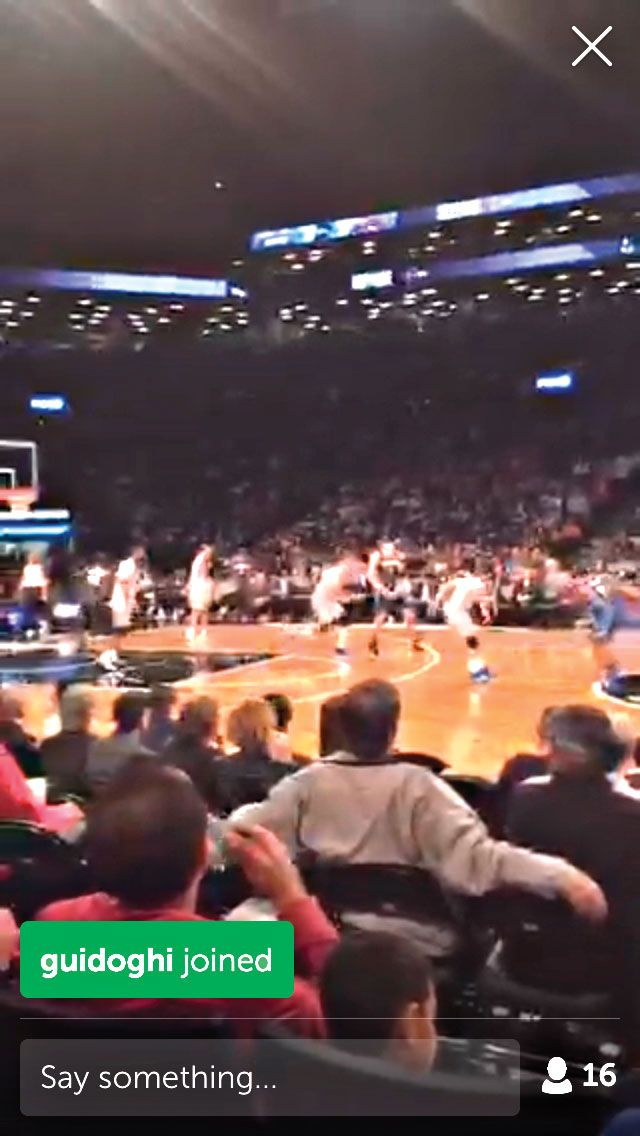 , while another man in Abu Dhabi was speeding down a deserted freeway at 4 a.m. There was a livestream of Michelle Obama giving Alicia Keys an award at the Grammys on the Hills 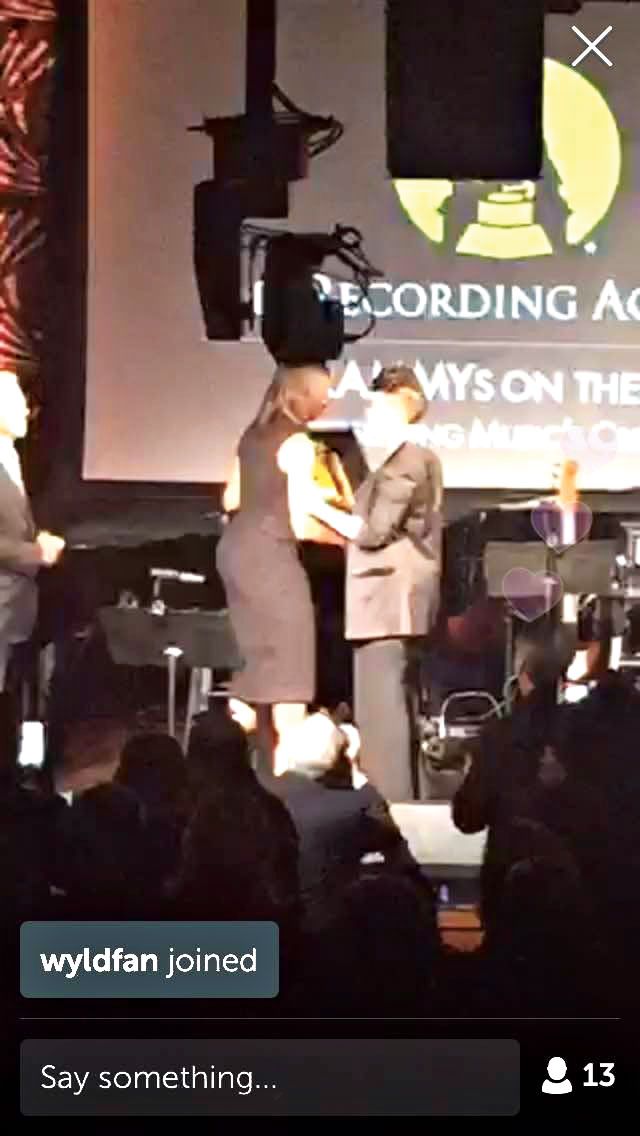 event, as well as one showing a crew in North Carolina sharing a blunt. A tech blogger drove to Tim Horton’s for doughnuts. The actress Soleil Moon Frye broadcast her kids playing in the backyard. A teenage girl in California gave a tour of her lip-gloss collection 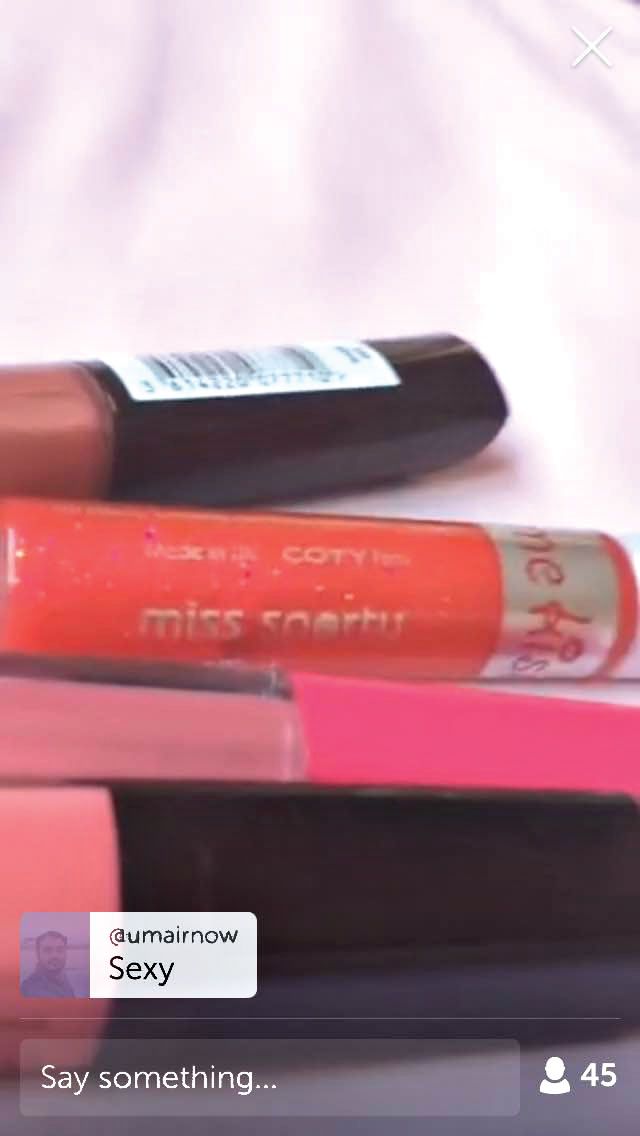 . Editors at Marie Claire and Cosmopolitan posed on an Iron Throne 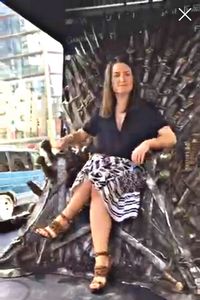 and toasted each other with what appeared to be Champagne and cupcakes, though the connection was a little fuzzy. A helicopter feed of a police chase in St. Louis ended with cops arresting the suspect without injury. 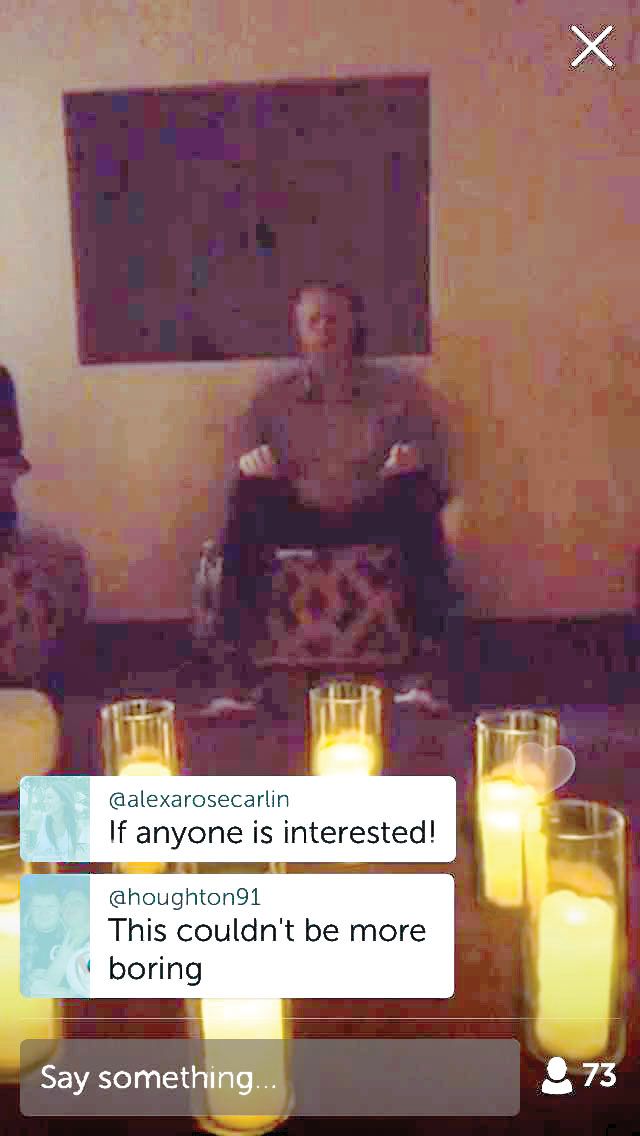 . College kids performed karaoke to “Party in the USA.” A raise-the-minimum-wage rally 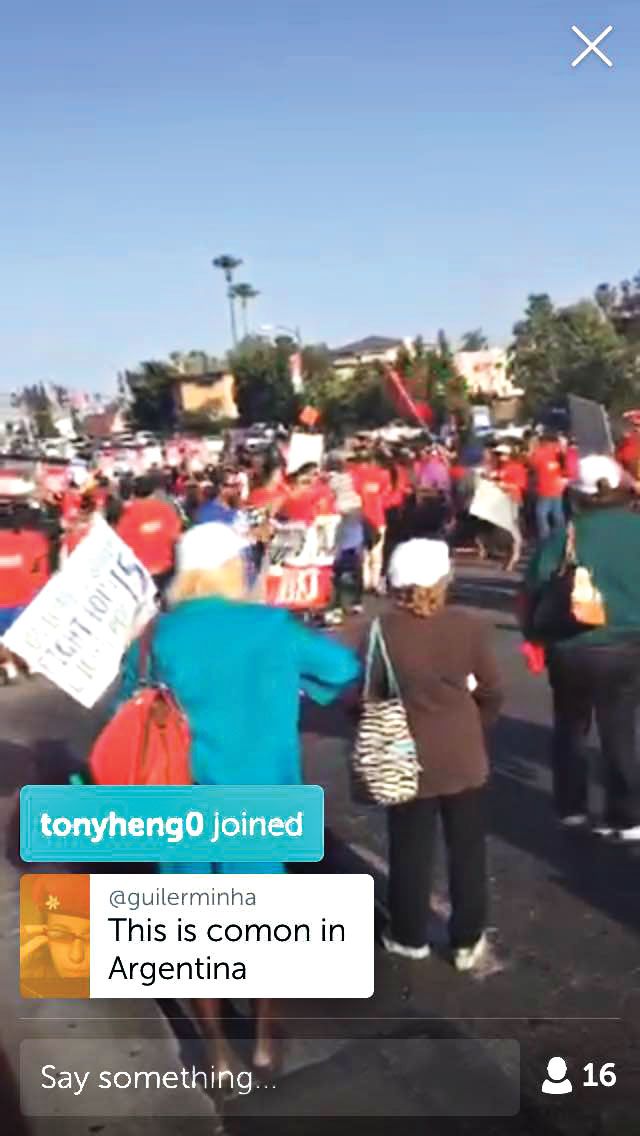 raged outside a McDonald’s in San Diego. One MSNBC reporter, on assignment in Iowa, filled airtime while he waited and waited for Hillary Clinton’s “Scooby” van to show.

*This article appears in the April 20, 2015 issue of New York Magazine.

celebrity 9:13 p.m.
Britney Spears Just Wants Some Privacy The star confirmed police were called to her home by fans.
celebrity 7:08 p.m.
Ziwe and Lisa Rinna Brought RHOBH to Paris Fashion Week They were “ready to own it” in Mugler.
power 6:11 p.m.
Harvard Students Walk Out on Professor Accused of Assault Over 100 students continued to protest the reinstatement of John Comaroff, who has been accused of sexually harassing and assaulting female students.
couture spring 2023 5:20 p.m.
Seduction and Suiting at Couture Fashion Week Shows from Chanel and Gaultier by Haider Ackermann were fresh.
identity 2:22 p.m.
The Monterey Park I Remember Spending family time in the Asian-majority city helped me proudly embrace my identity.
sex toys 12:33 p.m.
27 Best Sex Toys You Can Buy Online Reviewers don’t lie.
elvis 11:48 a.m.
Austin Butler Finally Gives Credit Where It’s Due The Elvis star admitted that his ex Vanessa Hudgens was the “friend” who manifested his biggest role.
kardashian kids 11:07 a.m.
North West Is Making Her Hollywood Debut The 9-year-old will lend her voice to a character in the Paw Patrol sequel.
my two cents 8:00 a.m.
‘Do I Need to Attend All of My Boyfriend’s Friends’ Weddings?’ Start by examining your priorities.
By Charlotte Cowles
how not to f*ck up your face 8:00 a.m.
In Defense of ‘Good Enough’ Aging When good enough is plenty good. Plus, are you dealing with thinning lashes?
celebrity Yesterday at 9:04 p.m.
Gisele Bündchen and her Jujitsu Instructor Are Riding Horses Now Meanwhile, Tom Brady is still considering his retirement.
celebrity Yesterday at 8:01 p.m.
Julia Fox Has a Mice-Friendly Apartment She mentioned her rodent roommate during an apartment tour on TikTok.
ask a beauty editor Yesterday at 3:57 p.m.
Should I Worry About UV Damage While Getting a Gel Manicure? A recent study found that exposure to a UV nail-polish dryer led to cell deaths. We spoke to experts about how to protect yourself.
weight loss Yesterday at 3:47 p.m.
Chelsea Handler Says She Didn’t Realize She Was on Ozempic “My anti-aging doctor just hands it out to anybody.”
where did you get that? Yesterday at 3:26 p.m.
Aleali May on Vintage Shopping, Jordan 1s, and Cargo Pants She shares her wardrobe essentials and styling tips.
school shootings Yesterday at 2:50 p.m.
A 6-Year-Old Shot His Teacher — Now What? The teacher’s lawyer claims the school administration was warned three times that the 6-year-old had a gun.
obsessive tester Yesterday at 2:46 p.m.
The 23 Very Best Foundations for Your Skin Whether you want to look airbrushed or like you’re not wearing makeup at all.
power Yesterday at 2:14 p.m.
What to Know About the New Brett Kavanaugh Documentary After debuting at Sundance, Justice filmmakers say they’re already getting new tips.
why is your skin so good Yesterday at 12:46 p.m.
How John Legend Gets His Skin So Good He and his wife, Chrissy Teigen, often share their skin-care products.
power Yesterday at 12:08 p.m.
Esmé Bianco Settles Sexual-Assault Lawsuit Against Marilyn Manson The Game of Thrones actress agreed to settle “in order to move on with her life and career,” her lawyer said in a statement.
More Stories