A 1916 portrait of Gertrude Vanderbilt Whitney by Robert Henri. Photo: Courtesy of The Whitney Museum of American Art

Today, the Whitney Museum’s new Gansevoort Street building opens to the public. While the upper three floors house the museum’s impressive inaugural exhibition, “America Is Hard to See,” the first exhibition in the (free) ground-floor gallery pays tribute to the Whitney’s origins with a collection of works from the Whitney Studio Club — the Greenwich Village gallery started by the heiress and sculptor Gertrude Vanderbilt Whitney. The great-granddaughter of Cornelius Vanderbilt, Whitney studied sculpture in Paris, and became immersed in the bohemian New York art world. At the turn of the 20th century, museums and galleries had little interest in art by living American artists. Whitney began collecting contemporary artwork dismissed by the art establishment: artists like Edward Hopper, George Bellows, and Georgia O’Keeffe.

She started showing her modest collection at the Whitney Studio Club in 1914. By 1929, she had assembled a collection of more than 500 works, which she offered to the Metropolitan Museum of Art. When the Met turned her away, she decided to start her own museum, with a mandate to focus exclusively on American art — a marginalized category, at the time. She founded the Whitney Museum of American Art in 1930, which opened the following year on West 8th Street in Greenwich Village.

In addition to being a leading patron of American art, Whitney also had the spirit — and style — of a rebel. A 1916 portrait by the painter Robert Henri, which hangs in the new Whitney building, shows her lounging on a couch, wearing a silky tunic and a pair of loose blue pantaloons. At the time, it was highly unusual to see a woman of her class and status wearing pants — and her husband, Harry Payne Whitney, refused to hang the portrait in their Fifth Avenue townhouse. Whitney’s granddaughter, Laura Miller Biddle, remembers her as a beautiful woman who “loved sensuous clothes” — and was tough when it came to advocating for artwork she believed in.

Click through the slideshow for a look back at Whitney’s luxurious, evocative style, and her life as an artist and collector.

Whitney with Robert Bacon, Alfred Smith, and Otto Kahn at the opening of the Whitney Museum, November 17, 1931 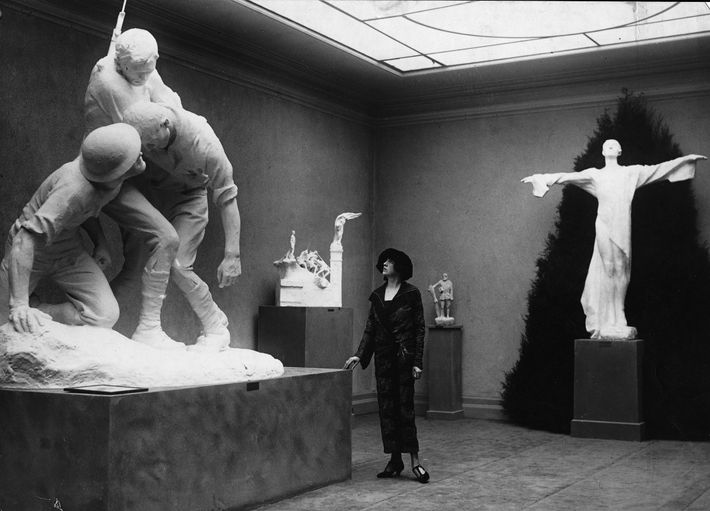 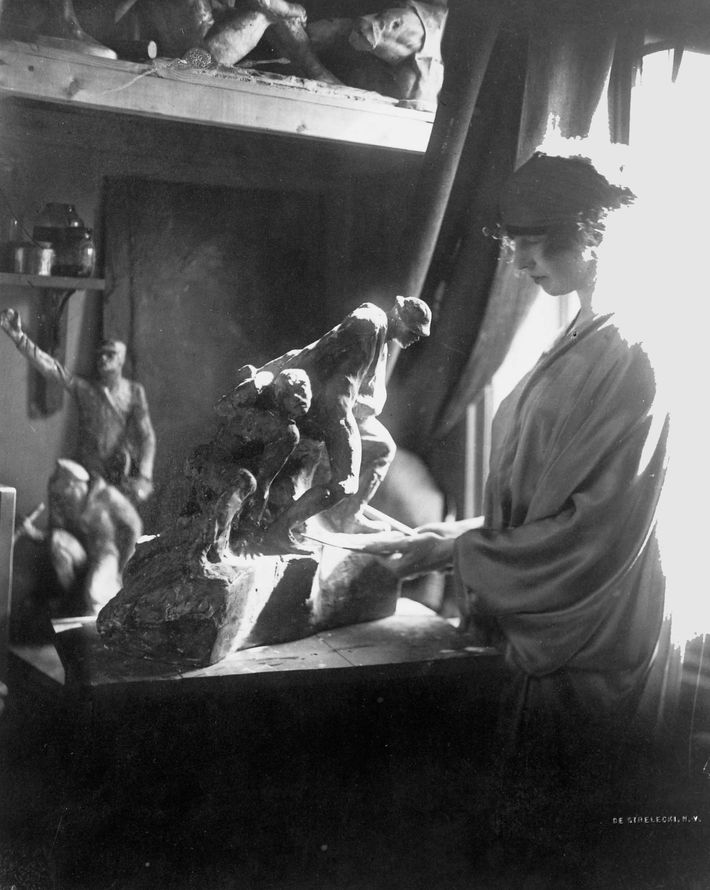 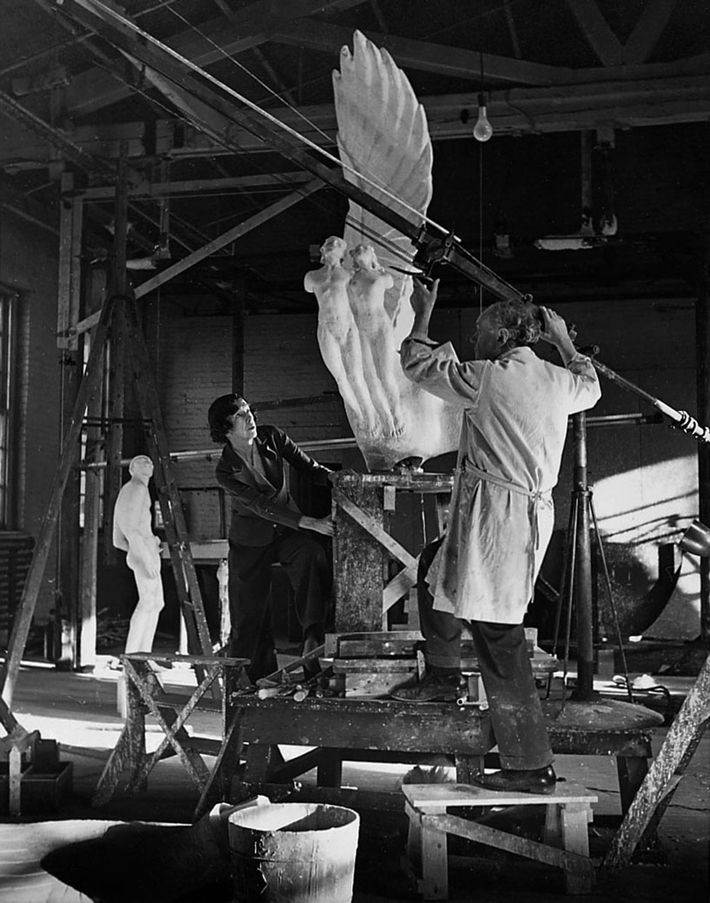 Whitney in her New York studio, working on “Spirit of Flight,” 1939 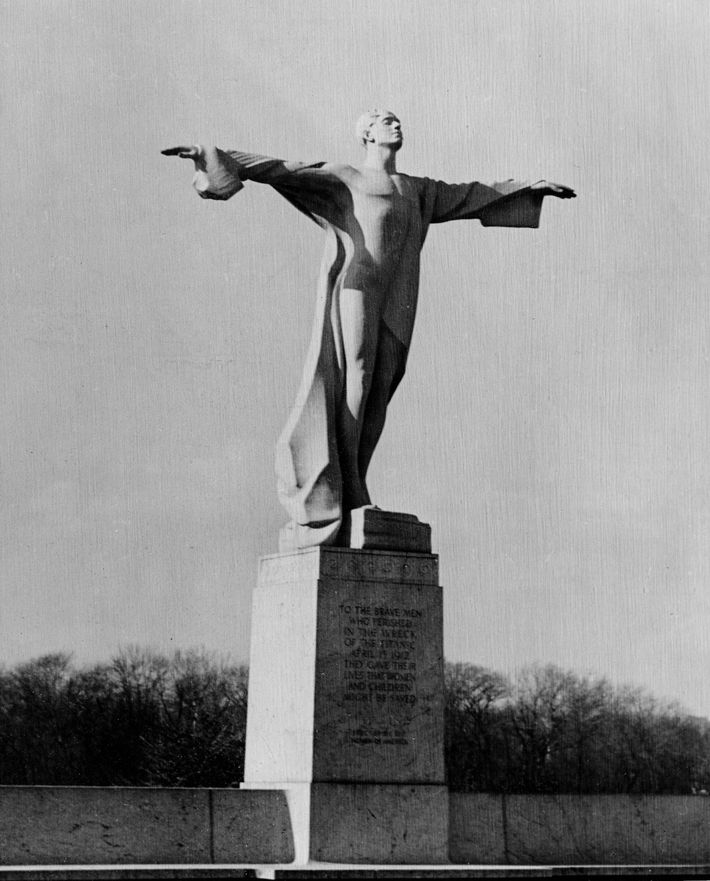 The Iconoclastic Woman Who Founded the Whitney

power 12:00 p.m.
Working Through the End Days of Roe The staff at the Jackson Women’s Health Organization is too busy to dread what’s very likely to come.
science 11:22 a.m.
Give Me the Goth Space Diamond Sotheby’s is expected to sell the 555.55-carat black diamond for at least $6.8 million.
my two cents 8:00 a.m.
‘I Was Harassed at Work. Can I Afford to Sue?’ Taking legal action might be more feasible than you think.
By Charlotte Cowles
recap 8:00 a.m.
And Just Like That … Miranda Blows Up Her Life, Again At least Harry doesn’t have penis cancer.
first person 7:00 a.m.
The First Time Was Terrifying. Now, It’s Just Excruciating. My family’s second bout with COVID might be worse.
By Reyhan Harmanci
valentine's day 7:00 a.m.
40 Valentine’s Day Gifts From Target All the heart-shaped products your heart desires.
zodiac seasons 7:00 a.m.
Your Guide to Aquarius Season Now is the time to be inventive and rebellious.
By Claire Comstock-Gay
succession Yesterday at 7:54 p.m.
Let This Brian Cox Quote Be Your Guide The Succession star is “too old, too tired, and too talented,” and, honestly, same.
tv Yesterday at 6:23 p.m.
Here’s Sebastian Stan on Filming With an Animatronic Penis The actor had a one-of-a-kind experience filming Pam & Tommy.
valentine's day Yesterday at 3:11 p.m.
58 Gifts for the Person You Love They deserve the world, but these picks will work too.
celebrity Yesterday at 1:59 p.m.
Finally, Something Bono and I Can Agree On He is apparently embarrassed by “most” of U2’s music.
news Yesterday at 1:56 p.m.
Cardi B Offers to Pay Funeral Costs for Bronx Fire Victims Last week’s apartment fire left 17 people dead and over 60 injured.
self Yesterday at 1:15 p.m.
I’m Tired of Explaining Why I Don’t Drink We have to expand our language beyond “sober.”
By Sarah Wood
remembrances Yesterday at 12:39 p.m.
The Fashion World Remembers André Leon Talley Designers, writers, and celebrities paid tribute to the inimitable fashion icon, who died on Tuesday at 73.
vampires Yesterday at 12:08 p.m.
Megan Fox’s Engagement Ring … Bites? “The bands are actually thorns. So if she tries to take it off, it hurts.”
celebrity Yesterday at 11:03 a.m.
Tracing the Ongoing Feud Between Britney and Jamie Lynn Spears Things spiraled out after Jamie Lynn went on Good Morning America to promote her new book.
style Yesterday at 9:35 a.m.
Anna Wintour Remembers André Leon Talley The Vogue editor mourned her friend and former colleague, calling him “a brilliant and compassionate man.”
in memoriam Yesterday at 8:33 a.m.
André Leon Talley Has Died The former Vogue creative director and editor passed away unexpectedly this week at the age of 73.
culture Jan. 18, 2022
There Really Is a Coordinated Online Attack on Meghan Markle A new analysis found that the Duke and Duchess of Sussex were the targets of a strategic, monetized social media campaign against them.
euphoria Jan. 18, 2022
8 Pieces You Can Shop From Episode 2 of Euphoria By Kim Shui, Réalisation Par, Nodaleto, and more.
More Stories