Miscarriages, which usually occur as a result of genetic factors and affect 15 to 20 percent of pregnancies, are tragic and very difficult to talk about. A new survey published in Obstetrics & Gynecology shows that people harbor many misconceptions about both the frequency and most common causes of miscarriages — misunderstandings that may compound the feelings of guilt and shame that occur in the wake of one.

The researchers, led by Jonah Bardos of the Albert Einstein College of Medicine/Montefiore Medical Center, built a 33-item survey covering many facets of miscarriages and recruited 1,147 respondents via Amazon Mechanical Turk to take it for $.25 each. The authors included some quality-control measures — they note that “if respondents answered the attention check question of ‘I had a fatal heart attack while watching TV’ with a ‘yes’ or ‘maybe,’ meaning they are reporting they have died, all of their responses were excluded from analysis.”

“This is certainly the only study of this size that’s been conducted” on miscarriages, said Dr. Zev Williams, the survey’s corresponding author, “but I actually think this may be the only study that’s ever been done to look at perceptions and understandings of miscarriage.” The respondents were, generally speaking, representative of the U.S. population, except on race — there were comparatively more whites and Asians and fewer Latinos and African-Americans.

The survey revealed that people greatly underestimate the frequency of miscarriages: 55 percent believed they affect less than 6 percent of all pregnancies. And 22 percent wrongly believed “that lifestyle choices such as drug, alcohol, or tobacco use during pregnancy are the single most common cause of miscarriage, more common than genetic or medical causes.” In both cases, men were two and a half times more likely to hold the false belief than women.

More generally, the respondents exhibited a rather emotionally charged view of the causes of miscarriage: 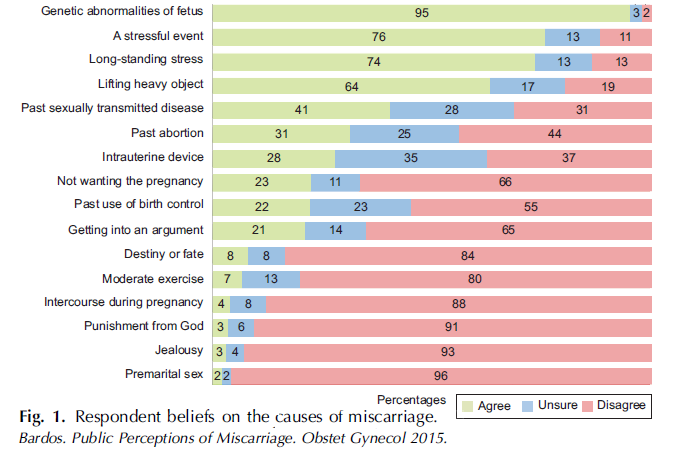 As the chart indicates, lots of people believe miscarriages are caused by things that 1) don’t actually cause them, like arguing, lifting heavy objects, having had STDs in the past, or having used contraception in the past, and 2) could easily be interpreted, in the wake of a miscarriage, as a woman’s or a couple’s “fault.”

To Williams, some of these beliefs have become entrenched in part because miscarriages are an ancient problem and therefore beliefs about their causes “were generated at a time when our thinking about health was radically different.” These ideas, much like folk remedies, simply get passed down from generation to generation and become difficult to dislodge as a result. The problem is that the one-two punch of people underestimating the frequency of miscarriages and overestimating the likelihood that they’re caused by some failing on the part of a woman or a couple leads to a cycle of stigma. “Because people feel (erroneously) guilty and ashamed that they had a miscarriage, they don’t discuss it,” Williams explained. “This, in turn, makes those who suffer from a miscarriage feel much more isolated and alone, and this just perpetuates the cycle.”

At the moment, said Williams, “Research into miscarriages is woefully underfunded and lags behind other far less common conditions.” But he’s confident that, in the long run, knowledge can help dispel some of the misunderstandings revealed by him and his team’s survey. Just as the taboo surrounding cancer dissipated a bit “once we started to understand the molecular underpinnings of that disease,” he said, “so, too, I think a lot of the myths surrounding miscarriage will go away once we gain a deeper understanding of the true causes.”

What People Don’t Understand About Miscarriages

q&a 12:53 p.m.
Saint Omer’s Guslagie Malanda Is No Longer an Actress in Secret How the Saint Omer actress went from art curator to awards-season hopeful.
the wedding files 12:26 p.m.
A Twice-Rescheduled Midweek Wedding in the Hudson Valley “We’re not really ‘farm wedding’ people, so that limited our options.”
By Kaitlin Menza
celebrity couples 12:15 p.m.
This Good Morning America Romance Keeps Getting Messier Amy Robach and T.J. Holmes are reportedly out at ABC.
keeping up with the royals 11:57 a.m.
Has Prince Andrew’s Teddy-Bear Collection Been Confiscated? His Buckingham Palace apartment has reportedly been revoked, and with it, his dozens of stuffed toys.
bellissimo 11:47 a.m.
Where Have I Seen Michael Imperioli’s Home Before? It’s unclear where The White Lotus ends and Imperioli’s apartment décor begins.
couture spring 2023 11:42 a.m.
At Valentino, Couture for Today Designers often look to the past for couture inspiration, but Pierpaolo Piccioli of Valentino believes it is only relevant if it talks to the moment.
By Cathy Horyn
valentine's day 11:05 a.m.
13 Flower Alternatives to Shop for Valentine’s Day Options that will last longer than a week.
culture 11:03 a.m.
Pamela Anderson Found Pam & Tommy ‘Crushing’ The actress called the Hulu series “salt on the wound.”
extremely online 10:44 a.m.
I Can’t Shut Up About the M&M’s Drama Revisiting Tucker Carlson’s one-man campaign against the “spokescandies.”
what we know 10:35 a.m.
5 Memphis Cops Arrested for Murder of Tyre Nichols Footage of Nichols’s arrest and “savage” beating will be made public tonight.
valentine's day 10:25 a.m.
16 Beauty Products My Boyfriend Won’t Stop Stealing From Me They double as great Valentine’s Day gifts, too.
¡hola papi! 6:00 a.m.
‘I’m Ashamed of Being Unemployed’ The path is long, crooked, embarrassing, and deeply silly. Having friends and passions will make it tolerable.
By J.P. Brammer
celebrity Yesterday at 9:13 p.m.
Britney Spears Just Wants Some Privacy The star confirmed police were called to her home by fans.
celebrity Yesterday at 7:08 p.m.
Ziwe and Lisa Rinna Brought RHOBH to Paris Fashion Week They were “ready to own it” in Mugler.
power Yesterday at 6:11 p.m.
Harvard Students Walk Out on Professor Accused of Assault Over 100 students continued to protest the reinstatement of John Comaroff, who has been accused of sexually harassing and assaulting female students.
couture spring 2023 Yesterday at 5:20 p.m.
Seduction and Suiting at Couture Fashion Week Shows from Chanel and Gaultier by Haider Ackermann were fresh.
By Cathy Horyn
identity Yesterday at 2:22 p.m.
The Monterey Park I Remember Spending family time in the Asian-majority city helped me proudly embrace my identity.
sex toys Yesterday at 12:33 p.m.
27 Best Sex Toys You Can Buy Online Reviewers don’t lie.
elvis Yesterday at 11:48 a.m.
Austin Butler Finally Gives Credit Where It’s Due The Elvis star admitted that his ex Vanessa Hudgens was the “friend” who manifested his biggest role.
kardashian kids Yesterday at 11:07 a.m.
North West Is Making Her Hollywood Debut The 9-year-old will lend her voice to a character in the Paw Patrol sequel.
More Stories