Choreographer Blanca Li will present “ROBOT,” a show with her dancers and a mechanical orchestra, at BAM on June 9th. Photo: Ruven Afanador

For most dancers, a costume is the final, gilded touch before a performance — the last detail to fit to a choreographer’s vision. But sometimes, for choreographer and performer Blanca Li, the costume comes before the dance itself. “I was inspired by the dress,” Li said of a sweeping red gown designed by her good friend Azzedine Alaia that she wore to his fragrance launch last week. “It’s very close to the body, and then when it comes to the floor it has a lot of material and goes very far away in the back. So I created a choreography using the dress to make many different shapes.”  She performed a flamenco-tinged number in it, accompanied by guitar and cajon and, judging by an Instagram shot of Mr. Alaia himself flinging an arm in the air like a true bailaora, he approved.  “The dress is transforming through the movement,” Li explained, “becoming many different dresses.”

Few choreographers would create a dance simply because an outstanding dress exists, but Blanca Li is not most choreographers. Born in Granada, Spain, she started out studying flamenco. “I learned to use the material and the volume of a dress, which is something that takes time to learn, but once you do it’s very valuable,” Li says. “You can move very heavy material and use it to create shapes.” She was also a gymnast, and later studied modern dance, eventually at the Martha Graham and Alvin Ailey Schools in New York — a training that shows in Li’s statuesque bearing and fierce, earth goddess stage presence.

In the early ‘90s, Li fell in with a crowd of uber-creatives, including Pedro Almodovar, Paco Rabanne, Christian Lacroix and Madonna, because of her famous “fiestas” — raffish, unpredictable cabaret evenings that she presided over in Paris. Now, she collaborates with an expansive artistic coterie: she’s made dances for Almodovar’s I’m So Excited, choreographed an H&M commercial starring Beyonce, and staged runway shows for the likes of Stella McCartney and Jean-Paul Gaultier. Starting June 9th at BAM, she’ll present “ROBOT,” a show placing her dancers onstage with a mechanical orchestra and a troupe of intelligent robots who, yes, have been programmed to learn and perform her choreography.

Since Li made her first ballet in 1993, fashion and dance have been inextricably tied together in her work. Watching her dancers in costumes by the Spanish designer Sybilla, Li realized that “in a certain way, the movements made more sense because of the clothes.” Now, as soon as Li sees where a piece is going, she thinks about costuming. “It’s important to me in the finishing of the movement,” Li says. “How will the dancers be dressed? If they are in something very simple and close to the body, you will see one shape, different from if they wear a dress, or pants or shorts.”

Though much dance costuming focuses on ease of movement, Li often tends in the opposite direction: she is attracted to the idea of discomfort, when the circumstance demands it. “It can be very interesting to have a problematic costume,” she says. “The way you deal with the problem in your dancing, many times, may make it very beautiful.”  Her preference for style and materials differs from piece to piece. “Sometimes I need nothing — only the body, and I want the sensation of nakedness,” she says. “But sometimes I would like to have a volume that follows the movement and adds another energy to it, creating a sensation of velocity.”

In her own life on and off-stage, Li’s style is just as varied. “I’m very eclectic,” she says. “I change all the time. I can be in jeans, in a long dress, in leather because I feel like it’s a leather day.  You can become a different woman depending on how you dress.” For this shoot, she wore one thing she often does not: white. “I don’t know why,” she says with a laugh. “I actually made one ballet where everything was white. It was about ancient Greece, about the purity of the classical Greek sculpture, and I also had this image of the Mediterranean sky — clear, so much light.” Wearing these varied iterations of white here, “I felt like, it’s summer, you feel the beautiful day and the purity. White creates this sensation of timelessness.”

For this shoot, at photographer Ruven Afanador’s insistence, Li gamely threw herself on the floor, climbed up walls and whipped her skirts as if back in Granada. “An artist is someone who feels the freedom to go over the top every day,” Li says. “Being an artist, the most important thing is not to be afraid.” Click through our slideshow to see Li in some of the season’s most dramatic black and white pieces.

Starting June 9, BAM will present Li’s Robot, in which dancers perform with a mechanical orchestra and a troupe of intelligent robots programmed to learn her choreography.

*This article appears in the June 1, 2015 issue of New York Magazine. 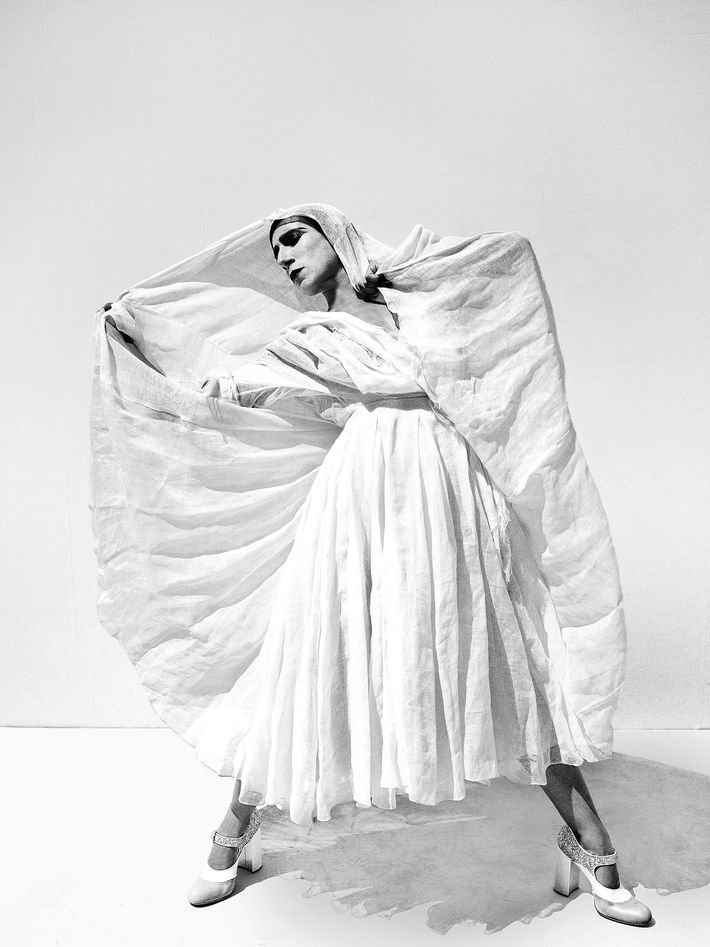 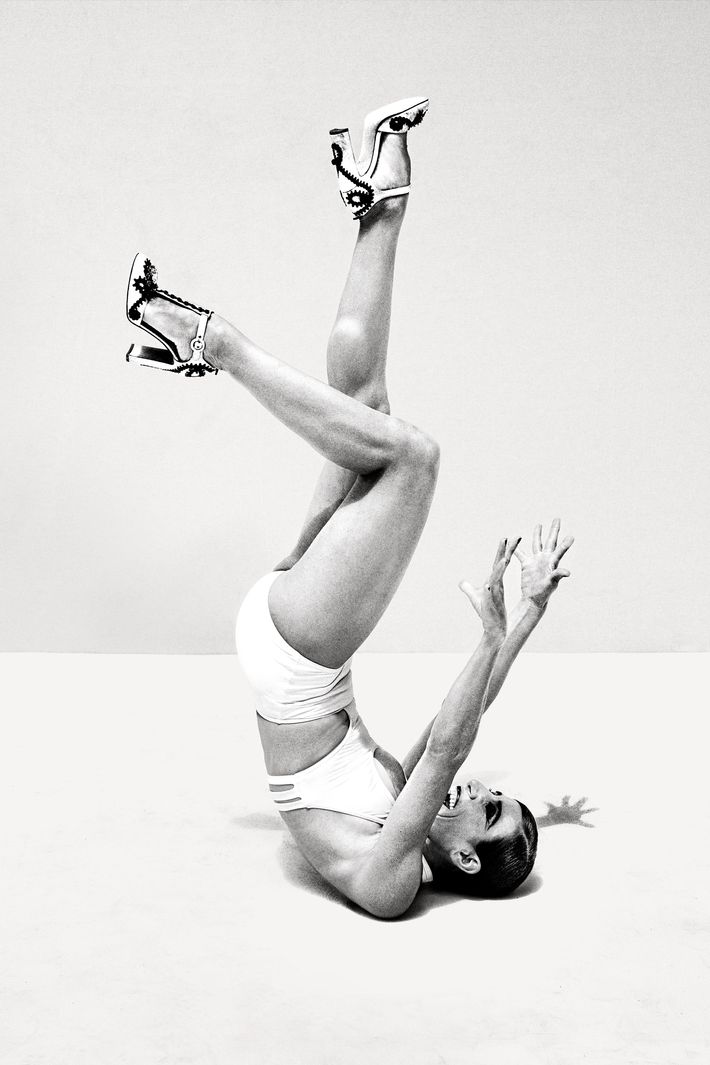 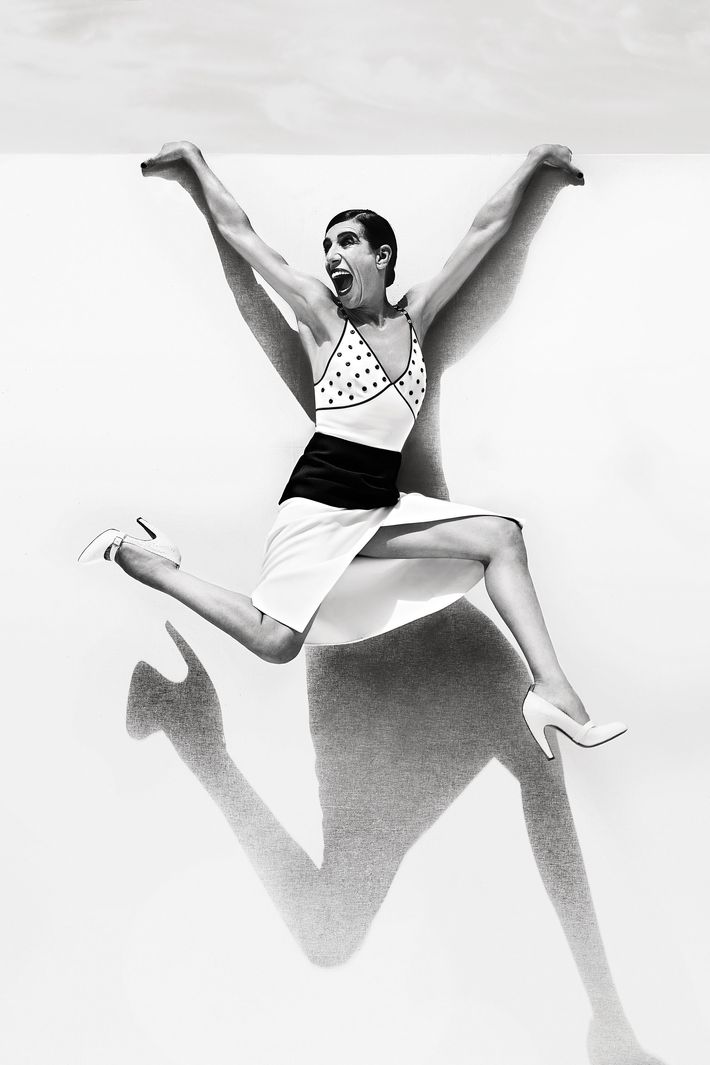 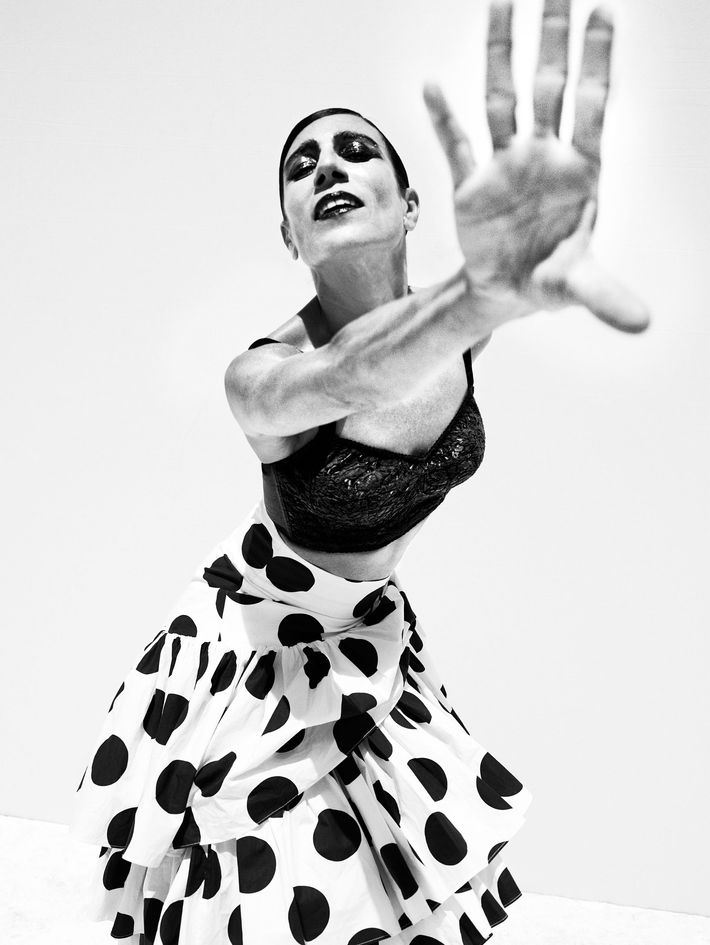 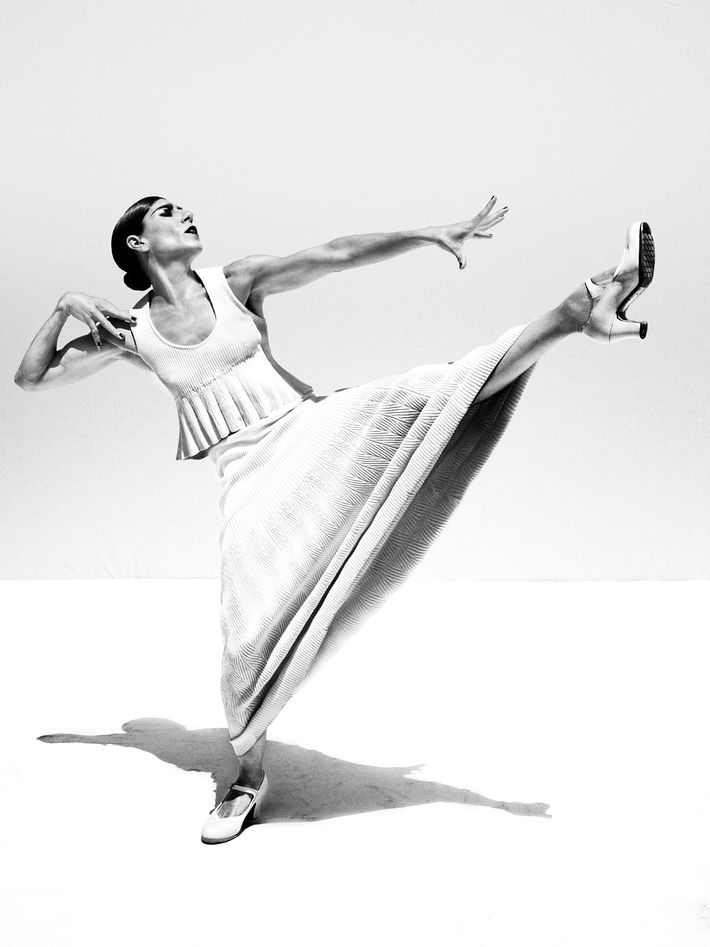 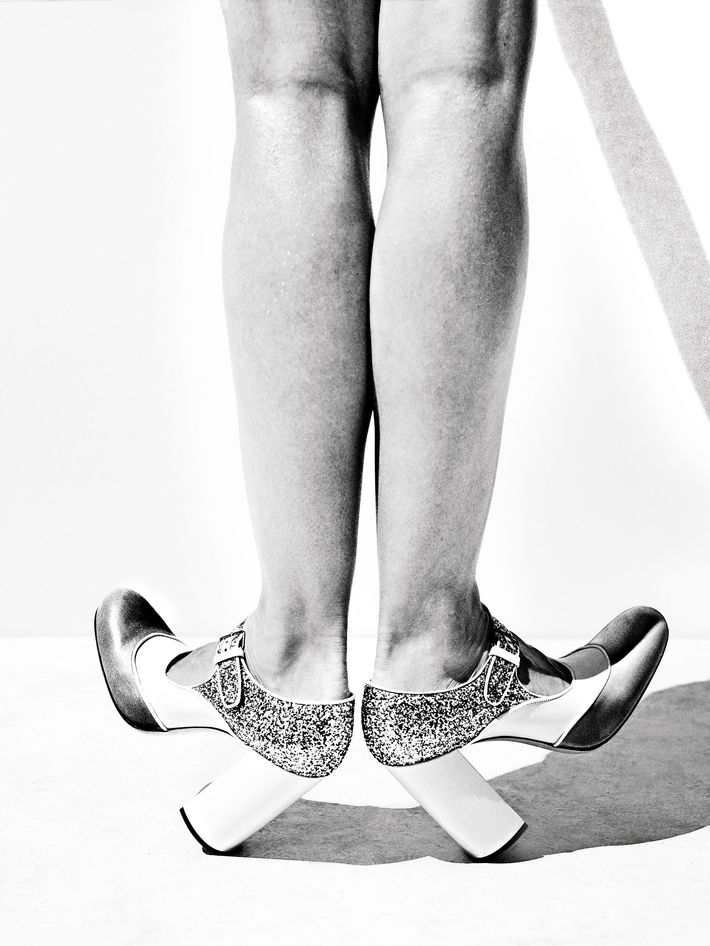 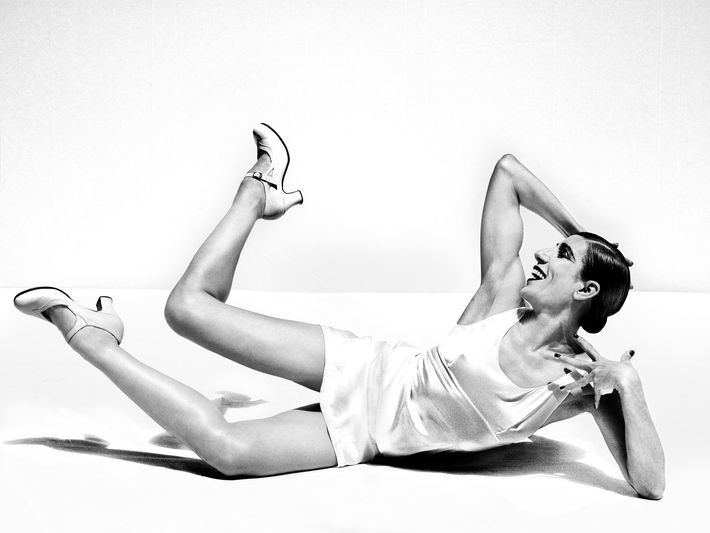 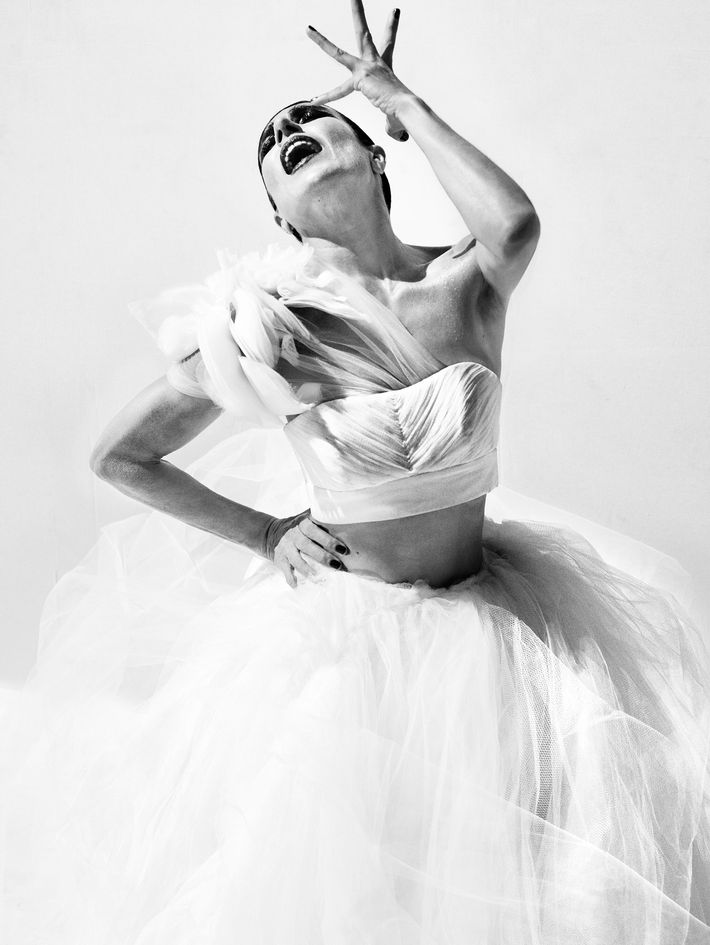 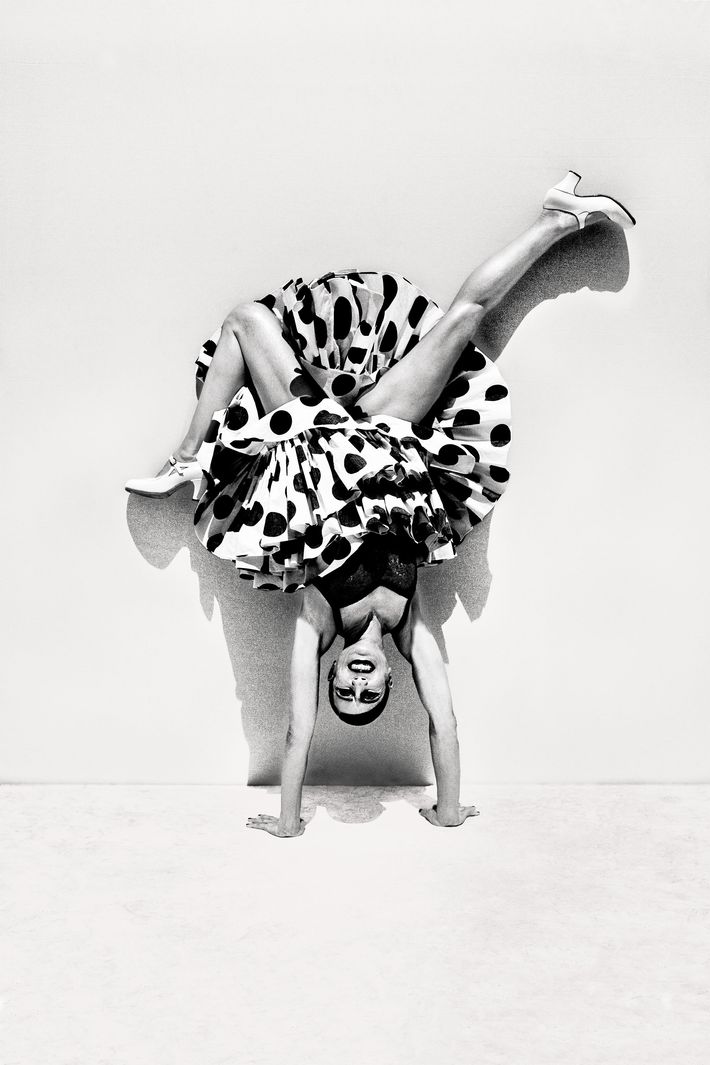 power 2:00 p.m.
What to Know About the Protests in Iran Since Mahsa Amini’s death, Iranian forces have killed more than 500 protesters, including women and children.
is this flirting? 12:58 p.m.
Divorced Dad Experiments With Thirst Traps A newly retired Tom Brady is posting mirror selfies.
brooding 12:00 p.m.
What If You Just Didn’t Clean That Up? Our ideas about cleanliness are stuck in the mid-20th century. Today, women can afford to care less.
By Kathryn Jezer-Morton
:( 11:21 a.m.
Ben Affleck Plumbs New Depths of Existential Despair Not everyone had a nice time at the Grammys, but at least one man was honest about it.
grammys 2023 9:47 a.m.
Fans Are Still Processing That Beyoncé Snub Are Grammy voters okay?
rich people stuff 8:00 a.m.
The Fleishman Effect In a city of Rachels and Libbys, the FX show has some New York moms worried they’re the ones in trouble.
By Caitlin Moscatello
appointment viewing 8:00 a.m.
The Last of Us Is the Apocalyptic Tearjerker You Won’t Want to Miss Yes, that zombie-apocalypse show The Last Of Us is actually worth the hype.
how i get it done 7:00 a.m.
Misty Copeland Is Back in the Studio And preparing for her return to the stage since becoming a mother and authoring a memoir. Here, she shares how she gets it all done.
grammys 2023 Yesterday at 10:35 p.m.
The Best, Wackiest, and Most Tin Man–Like Looks From the Grammys Red Carpet No, Beyoncé did not walk the carpet, but Cardi B, Harry Styles, Lizzo, and Taylor Swift arrived in their sparkliest outfits.
grammys 2023 Yesterday at 10:20 p.m.
The 9 Grammys Beauty Looks We Are Re-creating ASAP Want inspiration for your GRWM? Doja Cat absolutely wins in the winged-eyeliner category.
grammys 2023 Yesterday at 8:55 p.m.
The Highlights and Disappointments of the 2023 Grammys From waiting for Beyoncé to Kim Petras’s historic win.
sex diaries Yesterday at 8:00 p.m.
The Tokyo Woman Flying to Milan for a Former Co-worker This week’s sex diary.
grammys 2023 Yesterday at 5:11 p.m.
Every Look From the 2023 Grammys Beyoncé, Taylor Swift, Harry Styles, Lizzo, Bad Bunny, Adele, Doja Cat, Jack Harlow, Mary J. Blige, Sam Smith, and more.
By Brooke LaMantia
astrology Yesterday at 8:30 a.m.
Madame Clairevoyant: Horoscopes for the Week of February 6 A full moon in Leo brings long-simmering feelings to the surface.
By Claire Comstock-Gay
grammys 2023 Yesterday at 12:05 a.m.
Beyoncé Just Broke a Grammys Record The night ended with an upset, but she still holds more awards than any other artist.
back in the press Feb. 4, 2023
13 Takeaways From Armie Hammer’s First Interview Since His Scandal He admitted to being emotionally abusive to his accusers, but claimed that all his sexual encounters were consensual.
parties! Feb. 3, 2023
Pauline Chalamet, Tessa Thompson, and More of the Bestest Party Pics This Week Partying with Guerlain, Marni, and more.
life after roe Feb. 3, 2023
The Future of Abortion Pills Is on the Line One Trump-appointed judge holds the power to effectively ban medication abortion even though the U.S. approves its use up to ten weeks into pregnancy.
spring fashion Feb. 3, 2023
Ella Emhoff’s Other Plus One Her always-present Secret Service detail.
style Feb. 3, 2023
At Marc Jacobs, a Generous, Life-Enhancing Fashion History Lesson The designer’s latest show, “Heroes,” celebrated the the late Vivienne Westwood.
More Stories