The fall 2015 Couture shows wrapped last week at Valentino, in a grand Roman finale worthy of an opera. But earlier in the week it was all about the streets of Paris, where bombshells like Lupita Nyong’o and Julianne Moore made their way from shows to parties in elegant attire. For those of us editors lucky enough to sit among the millions of flowers, it was a fashion feast, indeed. From the star power to the star looks to the construction of a casino from whole cloth, here are the 12 best moments from the week.

1. Chanel staged a massive star-studded casino.
Considering Chanel’s reputation for all-out show productions (A brasserie! A supermarket! A manmade island in Dubai!), it was a surprise to walk into a quieter, scaled-back casino at the Grand Palais on Tuesday. A few tables sat in the center, surrounded by Chanel-themed slot machines (Little Black Jack–et, anyone?), but the real staging came from famous friends of the house. Kristen Stewart, Jemima Kirke, Vanessa Paradis, Lily-Rose Depp, and Oscar winner Julianne Moore, among others, came to play. The eveningwear-clad celebs sat center, playing at roulette tables, while the lineup of jazzy evening dresses (in feathers, velvets, and rubberized fringe) and iterations of Chanel’s ubiquitous suits (some using 3-D-printing techniques) circled around them.

2. Couture Week is just a great excuse to throw parties, which have all become special performances now. At Lancôme’s 80th-anniversary soiree, Kylie Minogue performed. Lauryn Hill sang to the crowds at Tory Burch’s store opening in Paris. And at Viktor & Rolf’s party, Tori Amos serenaded. Not to be outdone in Rome, after Valentino’s blowout dinner, guests entered an entirely new party where Mika performed with great energy.

3. If you are a princess, good news: This would be a good time to get married and order a couture dress. Typically the last look of a couture show is a wedding dress, and this season offered a variety of slightly nontraditional marital attire. Elie Saab showed a mind-meltingly beautiful embroidered, double-wide lace gown in gold. And Chanel offered a sophisticated white suit with tulle shoulder veiling, worn by Kendall Jenner. And for the recycling/DIY enthusiast, John Galliano’s bride at Maison Margiela wears a dream of a dress trimmed in plastic bags.

4. There were great hair and makeup options for rich eccentrics! Sculpted hair was a nice contrast from the natural beauty we see often on the runway. At Maison Margiela, we saw cobalt-slicked eyes and wavy hairpieces. Jean Paul Gaultier’s models sported headpieces made out of hair by wizard Odile Gilbert. And at Chanel, each model had aggressive blush, red lips, heavy brows, and severe cropped hairdos.

5. The staging and set design did not disappoint. Raf Simons loves a garden. For his Garden of Earthy Delights, a pointillist-painted plexi setting (a painterly nod to his first couture collection for Dior, where each room was walled in different-color roses) was built in the yard of the Rodin Museum on a blisteringly hot day, making for a hothouse daze. Purple shag carpet made an even trippier runway for the beautiful show.

6. I saw some of the fanciest jewelry in the world. When not at shows, I spent every spare moment in the lush showrooms of jewelers and couture houses. Chanel used clear rock crystal to display the inner designs of their pieces, while Bulgari’s new evening watches were colorful works of art. My favorites were all of the truly special earrings, like Chopard’s pear-shaped spinels surrounded by rubies and diamonds. Dreams.

7. Speaking of earrings we want to own but cannot … Giambattista Valli dominated Instagram with his finale gowns, the largest swaths of tulle to walk the couture shows. But it was the oversize embroidered-fabric earrings paired with a great silver fringed dress that had all the fashion editors losing their minds.

8. Resort, the season that never ends, finally ended. Is it even all about couture anymore? The schedule was packed with shows and lots of fine jewelry to see, but there were even more cruise collections, designer-collaboration previews, and resort shoe presentations. We loved Céline and Miu Miu’s resort collections, and got a peek at Uniqlo’s collaboration with Lemaire and are already putting together a mental shopping list.

9. Couture gets in the gender game. At Maison Margiela, John Galliano slipped a few male models into the lineup, a thing we’ve seen in reverse more frequently at the men’s shows with women’s resort looks. But here it was cool to see couture evolve alongside the ongoing gender conversation.

10. It’s not all about gowns at the shows, and the outerwear at Dior looked just as carefully constructed as any of the more intricate evening looks. Romantic dresses veering on a chic Medieval Times look were topped with oversize outerwear. There were one-sleeved cape coats and a gorgeous red sweeper with an elongated flared sleeve.

11. Valentino heads to Rome.
Valentino and creative directors Maria Grazia Chiuri and Pierpaolo Piccioli brought their couture collection to Rome, where they are based and where they also plan to open a couture school. Guests were taken on a private tour around Rome to see an exhibition of ten locations with historic meanings for the brand, each spot with its own scent created for the occasion.

Secrets of Rome revealed, the Bagno di Diana is a private bath owned by the Pamphili family. Beautiful shot taken by @thesartorialist join us tomorrow at 7.30pm as we live stream the #HauteCouture show from Paris. #linkinbio #MirabiliaRomae

Discovering the secrets of Rome in Palazzo Firenze. #MirabiliaRomae join us tomorrow at 7.30pm on Valentino.com

12 . Valentino crushed it. The actual show took place near the Spanish Steps and was attended by 700 guests, nearly all dressed in Valentino. Roman goddesses and warrior princesses in black, red, and gold marched the runway, leading to a rare standing ovation. The show was followed by a dinner gala for all at Villa Aurelia high above the city. A perfect end to a dreamy Fashion Week. 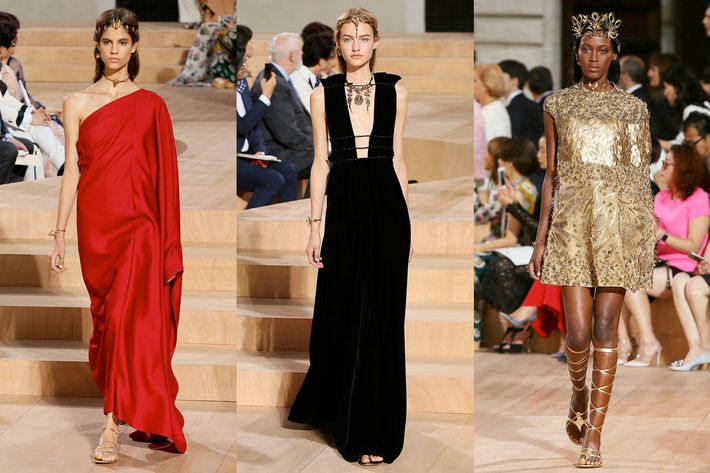 The 12 Most Extravagant Moments From Couture

astrology Yesterday at 8:30 p.m.
Madame Clairevoyant: Horoscopes for the Week of October 3 Mercury retrograde has finally ended. Although its effects will take time to wear off completely, we can all breathe a sigh of relief.
By Claire Comstock-Gay
sex diaries Yesterday at 8:00 p.m.
The Writer Staying on Her Crush’s Couch This week’s sex diary.
thanks i hate it Yesterday at 6:08 p.m.
Kylie Jenner’s Bleached Eyebrows Look Very Familiar Kim Kardashian’s little sister is following in her footsteps.
celebrity Yesterday at 4:20 p.m.
Britney Spears’s Mom Apologized to Her in an Instagram Comment “I am soooo sorry for your pain,” Lynne Spears wrote in part.
pfw spring 2023 Yesterday at 2:02 p.m.
The Best Street Style at Paris Fashion Week See our favorite looks from outside the shows, from Crocs to head-to-toe Dior.
By Olivia Luppino
celebrity Yesterday at 12:48 p.m.
Trevor Noah And Dua Lipa Sure Look Cozy A source claimed the pair are “just friends” after they were spotted kissing in New York City this week.
society pages Oct. 1, 2022
Where Art Thou, Adam Driver? Inside New York Film Festival’s Campari-drenched White Noise party.
By Sangeeta Singh-Kurtz
review Oct. 1, 2022
At Loewe, Blurring Reality in a Digital Era Jonathan Anderson questions shape and silhouette in a modern way.
By Cathy Horyn
fashion Oct. 1, 2022
How Bella Hadid’s Spray-on Dress Was Made We were just as confused. So we found out.
parties! Sept. 30, 2022
Microdosing Opulence at the Hermès Block Party The Parisian fashion giant celebrated the opening of its new flagship store in New York.
how does it fit? Sept. 30, 2022
We Tried Ganni’s Top-Selling Pieces on 3 Different Bodies Are we #GanniGirls?
society pages Sept. 30, 2022
Martha Stewart and a Big Fish Stopped by the Tin Building Opening Jean-Georges Vongerichten’s South Street Seaport food hall celebrated its opening with a themed culinary funhouse.
q&a Sept. 30, 2022
Hiam Abbass on Playing Ramy’s Matriarch, Maysa We spoke to the Ramy star about the show’s ambitious third season.
fashion Sept. 30, 2022
Is There Trouble Between Anna Wintour and Edward Enninful? A new report from the Daily Beast hints at unrest between the Vogue editor and her protégé.
always shopping Sept. 30, 2022
Winter Gloves to Buy Before It’s Too Late We spoke with experts to get their favorite pairs.
parties! Sept. 30, 2022
Dua Lipa, Amal Clooney, and More of the Bestest Party Pics This Week Some of our favorite looks from the New York Ballet Gala, a Chanel launch, and other glam events.
power Sept. 30, 2022
Protests In Iran Continue Over Death of Mahsa Amini Despite a brutal crackdown, women continue to take to the streets in defiance of government orders.
the most fertile man Sept. 30, 2022
Nick Cannon’s Quest to Populate the Earth Continues Cannon just welcomed his third child with Brittany Bell.
pfw spring 2023 Sept. 30, 2022
At Rick Owens, an Ancient Muse Plus more from Paris Fashion Week, including a new energy at Schiaparelli.
By Cathy Horyn
friday sales Sept. 30, 2022
20 Things on Sale You’ll Actually Want to Buy: From Disney to Neutrogena Including K-beauty must-haves and a great pair of mom jeans
More Stories