In this month’s GQ, cover star Amy Schumer described what it was like to make jokes about “catching dick” in front of Hillary Clinton at this year’s Glamour Women of the Year Awards. It seems the two had an enviable bonding moment:

It was very cool. She was a good audience member — she commented on a couple of the jokes I told. I said that in L.A. my arms register as legs, and she really liked that. She was [like], “I can relate.” And one of the acts that had gone up before me did some stuff that was very disrespectful to her, and I definitely didn’t think it was funny, and I said to her, like, “What the fuck was that?” She just goes, “Par for the course … I’m so used to it.” 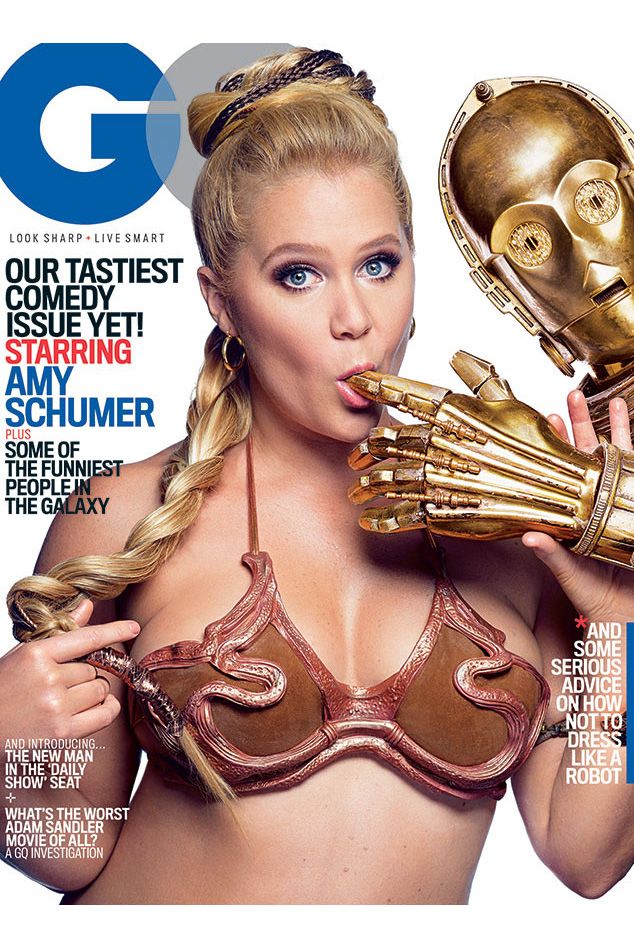 yikes 10 mins ago
Rebel Wilson, We’re Confused Her new loungewear collection isn’t size-inclusive … at all.
crime 2:24 p.m.
An Ex-Cop Allegedly Catfished a Teen and Killed Her Family The former Virginia trooper was killed in a shoot-out with authorities last week.
holiday gifts 1:13 p.m.
17 Best Luxury Candles That Double As Great Holiday Gifts Including an affordable option.
celebrity 12:26 p.m.
Billie Eilish Is Amped to Be Dating Jesse Rutherford “Round of applause for me.”
do i need this? 12:10 p.m.
The Dapper Dan x GAP Hoodie Collab Is Back In four new plaid colorways for the holidays.
divorce 10:58 a.m.
Kim and Ye Are Officially Divorced Ye will reportedly pay Kim $200,000 in child support every month.
ask a beauty editor 8:00 a.m.
‘Is Dermarolling at Home a Good Idea?’ The issues with DIY microneedling aren’t as obvious as you might think.
parenting 8:00 a.m.
What Is It This Time? When my younger child recently woke up barfing, I tried to figure out if she had RSV, flu, COVID, hand, foot, and mouth disease, or yet another thing.
By Lydia Kiesling
fashion Yesterday at 5:23 p.m.
What to Know About the Balenciaga Ad Scandal The fashion house is under fire for two separate campaigns that consumers say promote child exploitation.
why is your skin so good Yesterday at 5:08 p.m.
How Kelly Rowland Gets Her Skin So Good Her “obsessive” routine involves regular cryotherapy facials, lots of face tools, and multiple cleansers.
celebrity Yesterday at 3:01 p.m.
Meghan Markle Won’t Be Joining The Real Housewives Anytime Soon Fans will have to settle for watching her life on Netflix.
strength Yesterday at 2:56 p.m.
Country Singer’s Kids Are Naturally Ripped, You Freaks Jessie James Decker did not Photoshop abs onto her young children, okay?
is this flirting? Yesterday at 2:55 p.m.
So This Is How Ben Affleck Signs His Flirty Emails Is it a promise, or is it a threat?
gone sale-ing Yesterday at 2:40 p.m.
These 16 Cyber Monday Beauty Deals Are Still Going Strong Tatcha, Sephora, and Nordstrom are still offering some great discounts.
black friday Yesterday at 1:10 p.m.
17 Cyber Monday Fashion Deals You Can Still Shop From Everlane, Nordstrom, Saks, and more.
celebrity Yesterday at 12:52 p.m.
Hailey Bieber Shares Her Experience With Ovarian Cysts She revealed she’s suffering from a cyst “the size of an apple.”
crime Yesterday at 12:27 p.m.
What We Know About the Death of Shanquella Robinson A 25-year-old American woman was found dead while on vacation in Mexico. Authorities have issued an arrest warrant for one of her friends.
ask a boss Yesterday at 12:00 p.m.
‘Should I Give My Boss a Holiday Gift?’ All your questions about holiday gift-giving at work, answered.
dream date Yesterday at 8:00 a.m.
Bilal Baig Steps Into Their Comfort Zone Sort Of’s star and co-creator finds their sweet spot.
gone sale-ing Nov. 28, 2022
What You Need From Net-a-Porter’s Holiday Sale According to the Cut Shop editors.
More Stories