Imagine meeting a stranger and having a chance to learn what sort of person they are by asking just one question. You might try the obvious: “Are you an introvert or an extrovert?” Or you could probe their political leanings: “Are you Republican or Democrat?” In each case, you’d hope the answer would tell you a fair bit about the person’s psychology.

Here’s a question you probably wouldn’t think of, but which new research suggests could be surprisingly informative: “Do you think your ‘self’ is located in your heart or in your brain?”

At a Neurological Level, Narcissists Are Needy
What’s Happening in Your Brain When You Can’t Stay Awake

There’s some recent research history to this question: A series of studies published in 2013 asked this question to hundreds of undergrad students at North Dakota State University. The researchers, Adam Fetterman and Michael Robinson, found that people’s answers correlated with a range of important and revealing psychological characteristics.

For example, people who said their “self” was located in their heart (about half the respondents) were more likely to be female, and “heart-locators” of either sex were more likely to rely on their emotions when making hypothetical moral decisions, such as how to respond to a sadistic prison guard who says he will kill your son and another prisoner unless you kill your own son. In this situation, heart-locators were more likely than “head-locators” to say they’d refuse to kill their own son — the more emotional and, in the specific circumstances, less rational choice because they were effectively condemning two people to die rather than one.

Other studies in the series found that people who saw their self as located in their brain tended to perform better on general-knowledge tests and to react less emotionally to stress. Of course, we refer to the heart and brain metaphorically all the time (“follow your heart” versus “use your head”) in a way that suggests we think of the heart as representing the emotions and the head as the seat of reason. These survey findings suggest that whether someone sees their essence as being located in their heart or brain tells us something literal about the person in question.

Now, researchers have taken this idea in new, even more nuanced and interesting directions.

A recent study in Organizational Behavior and Human Decision Processes reports that where people locate their sense of self even has ramifications for their views on controversial medical issues such as abortion laws and the appropriate criteria for determining whether a person is dead.

In surveys of hundreds of U.S. and Indian citizens conducted online via Amazon’s Mechanical Turk website, the research team, led by Adam Galinsky at Columbia Business School, used a range of creative ways for establishing whether someone is a heart person or a brain person — these techniques prompted participants to reflect more deeply than would a straightforward question, and gave an indication of how much a person located their self in the heart versus the brain or other body part, rather than it being a simple either/or issue.

For example, imagine you plan for various organs to be donated after you die so that your “self” lives on in these people. Imagine, too, that you had $100 million to bequeath to the different organ recipients — how would you distribute the money among them? The researchers found most people gave the lion’s share of the money to the brain-receiver and heart-receiver (presumably, participants saw these recipients as now containing more of their own essence), with only a small amount passed on to the receivers of the eyes, stomach, spine, and other parts. Consistent with the research from 2013, there was evidence that men are more often primarily head-locators: They showed a strong tendency to give more money to the brain-recipient than heart-recipient, whereas this bias was far weaker in women.

The researchers also found — this time using a simpler question about where the self is located — that heart-locators of either sex were more likely to endorse proposals for stricter abortion laws based on the initial detection of a heartbeat in the fetus, and to endorse the idea that a person’s death should be determined by when the heart stops beating rather than brain death. In a survey of U.S. college students, these researchers further established — perhaps unsurprisingly — that heart-locators are more likely to support heart-disease charities and that brain-locators are biased toward brain-based charities (such as an Alzheimer’s disease charity). 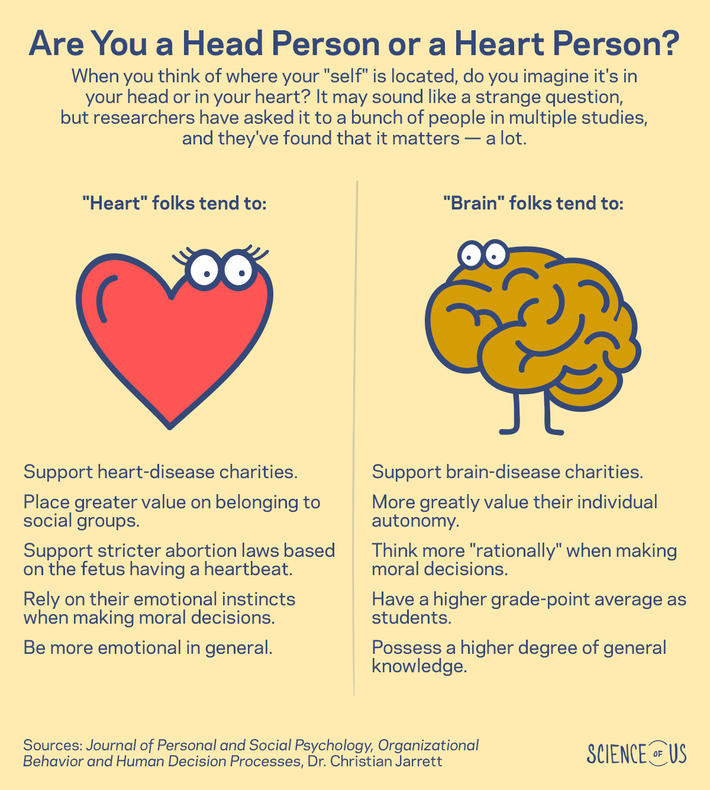 Galinksy and his colleagues are confident they are onto something important here. “We propose that a person’s perception of where the sense of self is located is a critical and defining trait similar to a person’s … personality profile,” they write. If true, this opens up a whole new area for research. Where you locate your sense of self might influence your aptitude for different occupations; it could influence the kind of marketing that moves you (emotional versus fact-based ads), and perhaps how you interpret other people — heart-locators might be drawn to strangers who seem warm, whereas you’d expect brain-locators to be more impressed by intellectual clout. And who knows, maybe the idea will find its way into online-dating profiles: “I’m a young professional with a good sense of humor, and I’m seeking a fun-loving fellow heart-locator.”

Dr. Christian Jarrett is editor of the British Psychological Society’s Research Digest blog. His latest book is Great Myths of the Brain.

Are You a Head Person or a Heart Person?

accidents 8:05 p.m.
Anne Heche in a Coma, Under DUI Investigation, Following Car Crash According to a representative, she has remained in a coma since shortly after the accident.
style 7:01 p.m.
Hey Fashion Friend: How Do I Wear Fashion Cargo Pants? We provide you with 13 non-ironic pairs to go with your tiny shirts.
ugh why 4:16 p.m.
Britney’s Lawyer Has Some Words for Kevin Federline “Britney Spears is a brilliantly talented, extremely hardworking icon … The same, unfortunately, cannot be said about Mr. Federline.”
sigh 4:00 p.m.
Male Actor Doesn’t See the Point of Intimacy Coordinators Emma Thompson and Kumail Nanjiani disagree.
5 questions with... 3:27 p.m.
Gugu Mbatha-Raw Takes on the Neo-Noir In Surface, she plays an amnesiac trying to uncover her truth.
wtf 2:42 p.m.
Watch Kathy Hilton Learn Lizzo Is Not Gabourey Sidibe It’s as cringe as it sounds.
panties we love 1:00 p.m.
Kim Kardashian on How She Made Her Skims Underwear A deep dive with Kardashian on what makes Skims panties so special. (Hint: It’s the fit.)
underneath your clothes 1:00 p.m.
The Best Backless Bras for Every Cup Size From plunging necklines to nipple covers and boob tape, there’s one for every outfit.
By Leora Herman
millie bobby brown 12:38 p.m.
Millie Bobby Brown Opens Up About ‘Unhealthy’ Relationship With Hunter Echo She says she felt “out of control and powerless” after the TikTok star claimed to have groomed her as a minor.
obsessive tester 11:06 a.m.
The Absolute Best Mascaras of All Time For every budget and need.
parenting 11:00 a.m.
My Queer Family vs. the Supreme Court If SCOTUS comes for marriage equality next, will I still be considered my son’s mother?
By Michelle Tea
allegations 10:21 a.m.
Unpacking the Allegations Against Ezra Miller Vermont police are unable to locate a woman and her three children who were living at Miller’s farm earlier this summer.
celebrity 8:47 a.m.
Olivia Wilde Didn’t Appreciate Being Served Custody Docs Onstage In new court docs, she said ex Jason Sudeikis “clearly intended to threaten me.”
my two cents 8:00 a.m.
‘I’m Good at Saving, But I’m Still Miserable’ Not to oversimplify matters, but what if you thought about money less?
By Charlotte Cowles
style Yesterday at 5:50 p.m.
5 New York City Dance Companies, Brought Together The shows, which continue through Saturday, are free and open to the public.
power Yesterday at 4:02 p.m.
Did Armie Hammer Really Think Voice Notes Were a Good Idea? In the trailer for House of Hammer, the actor shares a violent sexual fantasy in a voice note played by one of his exes.
recommendations Yesterday at 3:00 p.m.
18 Best Butt Plugs You Can Buy Online According to experts.
okay?? Yesterday at 2:41 p.m.
Oscar Isaac Is Still Struggling to Explain That Red-Carpet PDA Apparently he and Jessica Chastain are … like flatworms?
love and war Yesterday at 2:03 p.m.
Tinder’s Fatphobia Problem The dating app’s hold on the culture began around the same time as the mainstream body-positive movement. So why hasn’t anything changed?
By Kelsey Miller
do i need this? Yesterday at 2:03 p.m.
Do I Need a One-of-a-Kind Piece From Éliou’s New Clothing Line? The collection will pair nicely with the beaded necklaces beloved by Harry Styles.
More Stories