You are aware, presumably, that couples who are in their teens or very early 20s when they get married have the odds stacked against them, as younger couples have the highest risk of divorce. So it follows that the older you are when you get hitched, the better off your marriage will be – after all, by your 30s, you have a more solid sense of who you are, and you’re likely to be better off financially, too, both of which can help a relationship succeed.

But this is only true up to a point, according to a new analysis of the data: The divorce risk does indeed decline as individuals marry later, but this trend stops in the early 30s. Those who marry in their mid-30s or later are now more likely to divorce than those who marry in their late 20s, says Nicholas H. Wolfinger, a University of Utah psychologist, in a writeup of his new research for the Institute for Family Studies. “My data analysis shows that prior to age 32 or so, each additional year of age at marriage reduces the odds of divorce by 11 percent,” Wolfinger writes. “However, after that, the odds of divorce increase by 5 percent per year.” 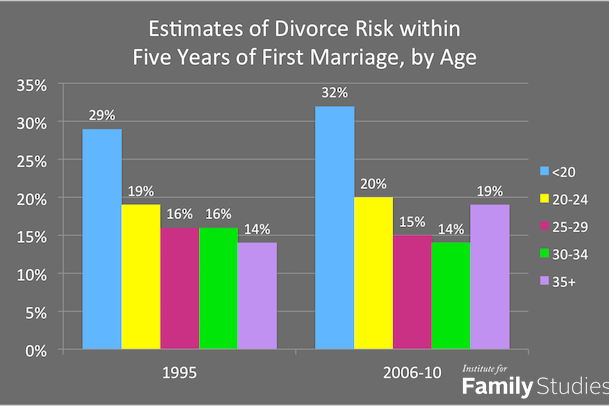 This is a reversal of a trend, not to mention an upending of conventional wisdom. In 1995, for example, the data suggested that the older couples were, the lower their risk for divorce. “But what was true for decades no longer seems to be the case,” writes Wolfinger, who used National Survey of Family Growth data collected from 2006 to 2010 for his research. He notes that his results held true even after controlling for social and demographic factors like education, race, religion, or size of the cities where the survey respondents lived. And the finding even persisted after controlling for the number of sexual partners the survey respondents had, despite previous research linking a greater number of sexual partners to a higher risk for divorce.

Wolfinger believes this could be understood as “a sort of practical pushback against the social forces that are driving up the median age of marriage.”

It’s … possible that some of the modern alternatives to marriage are too successful at siphoning people out of the marriage pool. Maybe some of the thirty-somethings who would have made good spouses now feel perfectly comfortable being single, or living with partners out of wedlock. Finally … perhaps some people who delay marriage get so used to single life that they make lousy spouses should they ever decide to give marriage a try.

Overall, it seems like a slightly depressing study to have released right in the middle of wedding season.

The Best Age to Get Married