When this week began, chances are high that you’d never heard of Cecil the lion, the beloved big cat of Zimbabwe’s Hwange National Park. But by now, you’ve likely heard of his death. Walter Palmer, a Minnesota dentist, paid about $55,000 for the (illegal) privilege of lion-hunting — though, after two days of tracking Cecil, it in the end wasn’t much of a hunt: Palmer and his guides reportedly used bait to lure the 13-year-old lion a half-mile outside of the protected park area. There, Palmer shot the animal with a bow and arrow, inflicting a severe wound that would lead to the animal’s death. The New York Times reports that Palmer had planned to mount Cecil’s head upon returning home.

Palmer has since expressed his regret over killing Cecil, claiming in a statement to the Star-Tribune on Tuesday that he did not realize that what he had done was not legal, or that Cecil was a famous and well-loved lion, or that the animal was the subject of an ongoing research project with Oxford University. But his words suggest that if Cecil hadn’t been famous, Palmer would regret nothing. He is, after all, a member of Safari Club International, a nonprofit “hunters’ rights” organization; the Safari Club website has a list of Palmer’s 43 kills, which include, among other things, a polar bear.

The question, then, is why? What motivates Palmer and other trophy hunters, as they’re called, to fly thousands of miles and spend tens of thousands of dollars, all for the sake of killing an animal like Cecil? The answer is complex, but, largely, it can be thought of as a demonstration of power and prestige, says Amy Fitzgerald, a sociologist at the University of Windsor.

In 2003, Fitzgerald and Linda Kalof of Michigan State published research in the sociology journal Visual Studies in which they analyzed 792 “hero shots” — the post-kill photo of hunter and prey — published in 14 popular hunting magazines. Most of the shots, Fitzgerald recalls, seemed to be arranged to show the hunter’s dominance over the animal. “The hunter tended to be pictured above standing or sitting above the animals, which clearly demonstrated the power dynamic that was going on there,” Fitzgerald said. In the vast majority of photos she and Kalof examined, the animal had been cleaned up, blood scrubbed away and wounds carefully hidden from view, making the animal look almost alive — as if the hunter had somehow tamed this giant, wild creature into submission. “It seems like, with the large animals, they were positioning them as though they were alive as a way to confirm the contest that had gone on — that this was a large virile animal that had to be taken down,” Fitzgerald said. 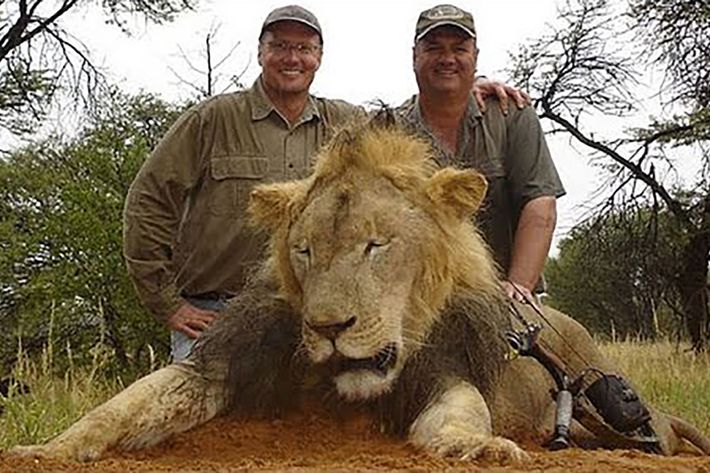 A show of power via dominance over the animal kingdom is, of course, nothing new. “This is something that goes back to antiquity, when kings had fake hunts with captured lions released just to be shot from a chariot by the waiting king,” Kalof said in an email to Science of Us. These “hunts” were done in front of an audience, which was a way of publicly declaring and validating the king’s power, Kalof noted, adding that “the trophy hunt of today is similarly a display of power and control by wealthy men.” Indeed, what Kalof describes sounds similar to today’s so-called “canned hunting,” which takes place in an enclosed area in order to increase the likelihood that some rich — and, often, American — tourist will nab a kill. (Noted fans of the canned hunt include Donald Trump’s two sons, Eric Trump and Donald Trump Jr.)

Michael Gurven, an anthropologist at the University of California at Santa Barbara, studies hunter-gatherer tribes in the Amazon and notes that, both in cultures where hunting is necessary for survival and in those where it is not, the skill certainly attracts attention, though for wildly different reasons. “There’s the element of conspicuous consumption,” Gurven said. “I study people who hunt for food because they have no other choice. And here is someone paying $50,000 — which, as an annual income, that would be well above the poverty line — to have the opportunity to put himself in potential danger in order to kill a lion.”

Another huge part of the draw for trophy hunters, of course, is the thrill, or the element of danger. But in Palmer’s specific case, this, too, ties back to the wealth element, Gurven argued. “When you’re paying $55,000 for something, it’s probably a sign that — if it’s not necessarily illegal, certainly the animal you’re hunting is rare,” Gurven said. “If you think about the danger of the actual hunt — sure, the animal itself is dangerous.” But with Cecil, at least, the lion’s familiarity with humans likely made him an easy target, Louis Muller, chairman of Zimbabwe Professional Hunters and Guides Association, told the Telegraph. “But the potential illegality of it — I think that makes it dangerous for a different reason,” Gurven said. “How do you smuggle the head or whatever he was going to take back to the U.S.? Getting that animal head on the wall is another signal of strength.” (Of course, there are plenty of trophy hunters who pursue the sport they love legally — he’s not talking about them here, just this one specific case of the lion and the dentist.)

The argument trophy hunters themselves often give is that killing the animals is an unlikely act of charity, and that the massive amounts of money tourists fork over helps to fund conservation efforts. Cecil’s death has reignited debate over that argument, but some major mainstream organizations have previously backed it, including the World Wildlife Fund. In a 2009 profile of Palmer in the New York Times, the curator of a bow-hunting club called Pope and Young explains that, yes, part of the draw is the “personal achievement” factor. But there’s another part to it, Glen Hisey explained. “It is a way of honoring that animal for all time,” he told the Times. Put differently, it’s a way of immersing yourself in nature in a way that modern life doesn’t always allow. As the conservationist and writer Aldo Leopold once noted (as quoted in the magazine Montana Outdoors), “Poets sing and hunters scale the mountains primarily for one and the same reason — the thrill to beauty. Critics write and hunters outwit their game for one and the same reason — to reduce that beauty to possession.”

identity 2:22 p.m.
The Monterey Park I Remember Spending family time in the Asian-majority city helped me proudly embrace my identity.
sex toys 12:33 p.m.
27 Best Sex Toys You Can Buy Online Reviewers don’t lie.
elvis 11:48 a.m.
Austin Butler Finally Gives Credit Where It’s Due The Elvis star admitted that his ex Vanessa Hudgens was the “friend” who manifested his biggest role.
kardashian kids 11:07 a.m.
North West Is Making Her Hollywood Debut The 9-year-old will lend her voice to a character in the Paw Patrol sequel.
my two cents 8:00 a.m.
‘Do I Need to Attend All of My Boyfriend’s Friends’ Weddings?’ Start by examining your priorities.
By Charlotte Cowles
how not to f*ck up your face 8:00 a.m.
In Defense of ‘Good Enough’ Aging When good enough is plenty good. Plus, are you dealing with thinning lashes?
celebrity Yesterday at 9:04 p.m.
Gisele Bündchen and her Jujitsu Instructor Are Riding Horses Now Meanwhile, Tom Brady is still considering his retirement.
celebrity Yesterday at 8:01 p.m.
Julia Fox Has a Mice-Friendly Apartment She mentioned her rodent roommate during an apartment tour on TikTok.
ask a beauty editor Yesterday at 3:57 p.m.
Should I Worry About UV Damage While Getting a Gel Manicure? A recent study found that exposure to a UV nail-polish dryer led to cell deaths. We spoke to experts about how to protect yourself.
weight loss Yesterday at 3:47 p.m.
Chelsea Handler Says She Didn’t Realize She Was on Ozempic “My anti-aging doctor just hands it out to anybody.”
where did you get that? Yesterday at 3:26 p.m.
Aleali May on Vintage Shopping, Jordan 1s, and Cargo Pants She shares her wardrobe essentials and styling tips.
school shootings Yesterday at 2:50 p.m.
A 6-Year-Old Shot His Teacher — Now What? The teacher’s lawyer claims the school administration was warned three times that the 6-year-old had a gun.
obsessive tester Yesterday at 2:46 p.m.
The 23 Very Best Foundations for Your Skin Whether you want to look airbrushed or like you’re not wearing makeup at all.
power Yesterday at 2:14 p.m.
What to Know About the New Brett Kavanaugh Documentary After debuting at Sundance, Justice filmmakers say they’re already getting new tips.
why is your skin so good Yesterday at 12:46 p.m.
How John Legend Gets His Skin So Good He and his wife, Chrissy Teigen, often share their skin-care products.
power Yesterday at 12:08 p.m.
Esmé Bianco Settles Sexual-Assault Lawsuit Against Marilyn Manson The Game of Thrones actress agreed to settle “in order to move on with her life and career,” her lawyer said in a statement.
the hard part Yesterday at 12:00 p.m.
There Is No Break Coming for Parents — Ever New year, same shit.
By Amil Niazi
celebrity Yesterday at 9:39 a.m.
Paris Hilton Is a Mother Now “Our hearts are exploding with love for our baby boy.”
love and war Yesterday at 9:00 a.m.
Can You ‘Hack’ Your Dating App to Get Better Matches? In this episode of Land of the Giants: Dating Games, we’re looking at the algorithms that run your love life.
By Sangeeta Singh-Kurtz and Lakshmi Rengarajan
celebrity Jan. 24, 2023
Kaia Gerber Accepts Her Nepo Baby Status “I won’t deny the privilege that I have.”
More Stories