Before Beyoncé wrote her sex-positive self-titled album and stood in front of a “Feminist” sign on national television. Before Nicki Minaj owned her sexual power (and Drake) with that lap dance in the “Anaconda” video. Before even Lil’ Kim’s Hardcore and Foxy Brown’s brand of raunchiness, there was Adina Howard paving the way with the song “Freak Like Me,” from her 1995 album Do You Wanna Ride? 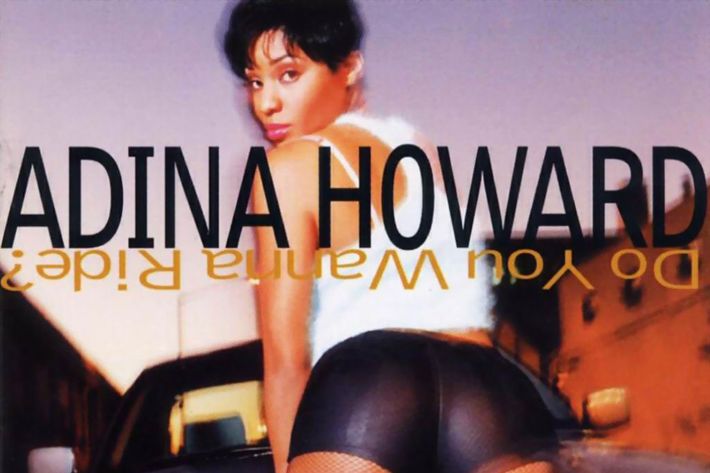 That single, which hit No. 2 on the Billboard charts and was the No. 1 played music video on BET that year, was a no-holds-barred anthem for women who were freaks, didn’t care who knew it, and demanded to get freaked on the regular. And Howard, who described herself as a “feminist ‘representing the sisters’” in a 1995 Washington Post piece about her album, was as bold, sexual, and assertive as her music (“Freak Like Me” might have been the most family-friendly tune on the album). But the music, a delightful raunch-fest, was about more than just shocking people: She was confronting and challenging cultural assumptions about black female sexuality and turning the tables on male artists whose music treated women like sexual objects.

She owned her sexuality and her right to be sexual no matter who was questioning it — like during this 1995 interview on BET’s Video Soul. The host asked her, “Does it bother you that you will be remembered as a sex symbol more than an artist?” and Howard candidly responded, “Why can’t I be both?”

Unfortunately, being a trailblazer means taking a lot of heat. One Washington Post columnist cited her as an example of the moral demise of the black community, her videos were eventually banned from BET for being too provocative, and her outspokenness got her dropped from her label before she could release her third album.

Now, on the 20th anniversary of Do You Wanna Ride?, production company Rebel Life Media has released Adina Howard 20: A Story of Sexual Liberation. Through interviews with Howard, academics, record producers, and music writers, the documentary highlights how Howard’s music allowed female artists to be as sexual as they wanted to be, without shame. She was ahead of her time and never fully got her dues, but given the empowered Minaj climate we’re in, more than ever, it feels like the right time to revisit her music.

Watch the clip below, check out the full hour-long documentary online at Vimeo, and make sure to put “Freak Like Me” on your DGAF playlist right after Lil’ Kim’s “Crush on You” and Nicki Minaj and Beyoncé’s “Feelin’ Myself.”

please clap 3 mins ago
Gisele Stays Winning She wishes her newly retired ex the best of luck in all his future endeavors [prayer-hands emoji].
spring fashion 8 mins ago
Starting Over With a Divorce Registry “We don’t see these things as gifts.”
By Kathryn Jezer-Morton
beyonce 10:11 a.m.
Are You Ready for the Beyoncé Ticketmaster Bloodbath? Hope you’ve been saving for Renaissance tour tickets.
spring fashion 10:00 a.m.
Introducing Nico Parker Meet the breakout star of The Last of Us.
By Iana Murray
how not to f*ck up your face 9:00 a.m.
Dear Beauty Marketing: Stop Telling Me How to Look Younger Understand what you’re buying. Plus: solving a red-eyelid mystery.
my two cents 8:00 a.m.
Saving Money Is Ruining My Social Life Don’t lecture your friends on their finances. If they want to change, they will.
By Charlotte Cowles
problem solving 8:00 a.m.
The New Rules How to text, tip, ghost, host, and generally exist with others in society today.
By
i have questions Yesterday at 8:59 p.m.
We Need to Talk About David Harbour and Lily Allen’s Bathroom Why is there carpeting around the bathtub?
oh no Yesterday at 5:59 p.m.
Is This the End of Bed Bath & Beyond? The retailer is closing 87 locations and could be headed toward bankruptcy.
in her shoes podcast Yesterday at 3:43 p.m.
In a World Dominated by Filters, Paulina Porizkova Is Embracing Her Age  On this week’s episode of the Cut’s In Her Shoes podcast, the former supermodel talks aging, betrayal, and her career.
By the Cut
society pages Yesterday at 3:29 p.m.
The Whitney Art Party Gets Horn-y Go inside the museum’s astrology-themed event with Ashley Graham and Tracy Anderson.
healthcare Yesterday at 3:25 p.m.
Florida Wants to Force Student Athletes to Share Their Menstrual History The move raises concerns about potential legal repercussions for students suspected of having abortions.
obsessive tester Yesterday at 2:31 p.m.
30 Makeup Brushes Every Part of Your Face Will Enjoy Soft brushes at every price point.
academy awards Yesterday at 1:39 p.m.
Unpacking Andrea Riseborough’s Controversial Oscar Nomination Why are people so worked up about the actor’s grassroots campaign?
your next move Yesterday at 12:52 p.m.
‘I Hate My Cushy Job. Should I Suck It Up or Just Quit?’ The answer is right there in the question.
q&a Yesterday at 12:34 p.m.
Bethann Hardison Looks Back on Her Life With a New Documentary The activist and model spoke to the Cut about premiering Invisible Beauty at Sundance and why she refuses to use the term “Black excellence.”
finally Yesterday at 12:09 p.m.
Do I Feel Sad for Tom Brady Now? Having lost everything to football, the quarterback is finally retiring for real.
health and wellness Yesterday at 12:07 p.m.
Naomi Watts Wants You to Talk About Lube “What kind of Dry January have you had … Dry AF … am I right?”
marketing? Yesterday at 12:03 p.m.
Lingerie Ad Compares Bra to … Ryan Reynolds? Harper Wilde has pulled a truly bizarre endorsement (?) of their product.
spring fashion Yesterday at 12:00 p.m.
Everyone’s Dissolving Their Pillowy Filler Faces The filler era has ended. Now, everyone’s scooping out their face.
By Sangeeta Singh-Kurtz
More Stories