It doesn’t feel good to fake who you are, and an increasing amount of psychological research is showing how — and why — it hurts. Back in April, for example, Melissa Dahl reported on interesting new research, which suggested that faking your personality at work could lead to “burnout and perhaps even physical health consequences.”

It’s an area of fairly active research, particularly among social psychologists. They’re intrigued by the ramifications of suppressing emotional responses, in particular, because so much of human social life — and therefore human life — comes down to the subtle ways we react, mirror, and respond to each other’s emotional cues. Suppressing emotions, and therefore these cues, throws a bit of a wrench in the finely tuned cognitive systems we’ve evolved to interact with and support one another through. As far as researchers can tell, this sort of suppression can have negative effects on both ongoing relationships and first impressions.

In an interesting new study in the Journal of Personality and Social Psychology, Allison M. Tackman and Sanjay Srivastava of the University of Oregon sought to better understand the ways emotional suppression might affect first-impression judgements. “The background and motivation for our study was that previous studies, going back a while now, have shown in various ways that people who use expressive suppression experience social costs,” said Srivastava in an email. “They have less social support, less satisfying social lives, and they experience trouble getting close to others. So the next question is, why — what is going wrong?”

To better understand this phenomena, the researchers videotaped four individuals watching the funny, famous fake-orgasm scene from When Harry Met Sally and a sad scene from the 1979 film The Champ. Sometimes the actors were told to react naturally to the scenes, and sometimes they were told to suppress their reaction. The participants in the study, 149 undergraduates, then watched all four versions of the video without audio (having been told to observe the subjects carefully), and were randomly assigned to either a “context” condition in which they could see what the person in the video was reacting to, or a “no context” condition in which they couldn’t: 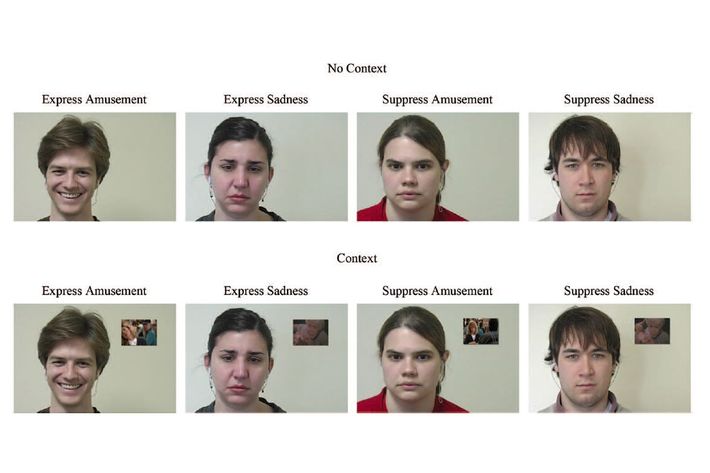 “After watching each video, participants reported their judgments of the target’s emotion experience, personality judgments of the target, and interest in affiliating with the target,” the researchers write, as well as answering a bunch of other items. Overall, the suppressors were judged to be less extroverted, less agreeable, and more “avoidant in close relationships” — more distant, basically —  than the non-suppressors. Suppressing also had a “large effect,” as the researchers put it, on the participants’ desire to affiliate with suppressors as compared to non-suppressors — they found them much less likable.

“What we found, in a nutshell, is that other people judge suppressors to be low in extraversion and low in agreeableness,” said Srivastava. “Or in more everyday language, they seem like the sort of people who are socially distant and indifferent to others’ feelings. And those impressions help explain why others don’t want to get close to them.”

There was at least one possibly noteworthy exception, though, to the general suppression-is-bad story: Folks who watched the orgasm scene, but for whom the study participants could see what they were watching, were viewed as more polite than those who didn’t stifle their laughter, apparently because of the clip’s racy content (in the non-context condition the participants had no way of knowing what they were suppressing amusement at).

“This suggests that suppression may sometimes have positive effects, and in the future it would be interesting to examine other circumstances in which suppression is socially beneficial (rather than socially costly),” said Tackman. “In contexts where suppression is a normative response or socially appropriate, what kinds of impressions do people form of the suppressor’s personality?”

In other words, there are common-sense reasons to think that suppression is sometimes a good thing — maybe “when you’re with certain people,” as Srivastava put it, “or when you’re in certain social roles, or when you have certain goals.” Suppressing emotion, after all, pops up in all sorts of wildly different cultures — it’s something humanity does quite frequently. Finding out why, and when this behavior is beneficial, is the next step.

Journal of Personality and Social Psychology

crime Yesterday at 5:19 p.m.
A Train Hit a Police Car With a Woman Handcuffed Inside She survived, though her attorney wonders why Colorado officers left their SUV parked directly on the tracks.
mfw spring 2023 Yesterday at 5:19 p.m.
The Best Street Style at Milan Fashion Week Chic looks from this fashionable city.
royals Yesterday at 4:43 p.m.
The Palace Is Reportedly Panicking About The Crown Again Royals are concerned the upcoming season will damage King Charles’s reputation.
all in the family Yesterday at 3:33 p.m.
Untangling the Secrets of a Teenage Mother We think of our parents as known quantities. But as Salon editor-in-chief Erin Keane writes in her memoir, Runaway, we rarely know the whole story.
mental health Yesterday at 3:15 p.m.
Megan Thee Stallion Wants to Help Hotties Get Therapy “Bad Bitches have bad days too.”
culture Yesterday at 11:57 a.m.
Why Is Hollywood Still So Obsessed With The Stepford Wives? Don’t Worry Darling wears its references to the cult classic on its sleeve.
review Yesterday at 11:52 a.m.
Does a New Designer Mean a New Direction? Not always. A mixed review of the debuts in Milan.
By Cathy Horyn
how i get it done Yesterday at 10:00 a.m.
How Über-Publicist Gia Kuan Gets It Done During Fashion Week “People would be shocked. It takes me maybe three minutes to deal with my makeup, do my hair, and get out the door.”
By Sangeeta Singh-Kurtz
celebrity babies Yesterday at 10:00 a.m.
Another Baldwin Has Arrived Hilaria announced the arrival of the couple’s seventh child.
divorce rumors Yesterday at 9:57 a.m.
Gisele Bündchen Isn’t Thrilled With Tom Brady’s Decision to Un-Retire She appears to have skipped his first home game of the season.
bffs Yesterday at 9:00 a.m.
Can a Childhood Friendship Really Last a Lifetime? In Best of Friends, novelist Kamila Shamsie attempts to find out.
life after roe Yesterday at 8:00 a.m.
The Abortion Crisis Manager Oriaku Njoku spent years fighting for patients in the South. Who else could lead abortion funds into the post-Roe world?
By Andrea González-Ramírez
how i get it done Yesterday at 7:00 a.m.
Ana Fabrega Was Supposed to Work in Finance, Not Comedy Fortunately for us Los Espookys fans, she pivoted.
By Max Gao
astrology Sept. 25, 2022
Madame Clairevoyant: Horoscopes for the Week of September 26 Late Thursday night, Venus enters Libra, lending added support to your Libra-season quest for social harmony.
By Claire Comstock-Gay
sex diaries Sept. 25, 2022
The Event Planner Whose Chef Boyfriend Wants More Sex This week’s sex diary.
culture Sept. 25, 2022
Rihanna is Going to Make Us All Watch the Super Bowl The singer will headline the 2023 Super Bowl Halftime Show.
review Sept. 24, 2022
At Gucci, Double the Clothes But Little Direction “Clothes are not enough today,” says Alessandro Michele backstage, as he grappled with the modern conditions for a creative director.
By Cathy Horyn
always shopping Sept. 23, 2022
22 Affordable Sweaters That Look Expensive The best way to prepare for sweater season without spending a fortune.
By Brooke LaMantia and Andrew Nguyen
fashion Sept. 23, 2022
Seeing Double at Gucci As a tribute to his mother, Alessandro Michele cast all twin models.
crime Sept. 23, 2022
Ryan Grantham Has Been Sentenced to Life in Prison The Riverdale actor killed his mother in March 2020.
More Stories