Racial color-blindness sounds pretty good in theory. After all, aren’t we supposed to be judging people based only on the contents of their character, rather than the color of their skin? But critics of the idea say it has some serious downsides. They argue that since race is a major contributing factor in all sorts of societal outcomes, from who goes to jail to what educational opportunities a child has, to adopt color-blindness as an ideology is to ignore important discrepancies, thereby allowing them to fester. If you can’t really even talk about racism, in other words, how are you supposed to address it?

An interesting new study in Social Psychology and Personality Science sheds some light on how color-blindness may affect minority kids. The authors, Kristin Pauker of the University of Hawaii at Manoa, Evan P. Apfelbaum of MIT, and Brian Spitzer of NYU, start by explaining that there’s good reason to think minority kids don’t benefit from a color-blind approach: a body of research has shown that “race is central to their identities, a source of psychological well-being, and a lens through which others perceive them.” Ignoring race, then, may well have a negative impact on those for whom it’s most salient. (Make sure to read Lisa Miller’s piece from May on a school in New York taking the exact opposite approach — splitting kids up by race at a young age specifically to have conversations about it.)

Can Racism Be Stopped in the Third Grade?
Scarcity Might Make People More Racist

And yet these kids, like most American kids, are steeped in a milieu of color-blindness — many are taught at a young age that it’s wrong to point out or focus on racial differences. Pauker and her colleagues wanted to learn more about this, so they recruited a group of 111 9-to-12-year-olds from “urban public elementary schools that serve low-income and middle-class families near San Francisco” (three of their responses were unusable due to a researcher’s error, leaving a total sample size of 108 children).

The kids were asked to play a game that’s basically Guess Who? Photos of 40 individuals were laid out in front of them, one of them the “correct” answer, and the children were tasked with picking the right one by asking as few questions as possible (folks who played “Guess Who?” growing up will remember asking questions like, “Does this person have glasses?” or, “Do they have blond hair?” and eliminating candidates according to the answers given by the other player). Pauker and her colleagues set things up so that asking whether the person was black or white or whether they were male or female could instantly eliminate half the photos. The researchers tracked the participants’ performance, videotaped the games as they progressed, and, after the game was over, asked and recorded the kids’ responses to two important questions: “[W]hether they noticed that White and Black people were displayed in the photos … [and] why they did or did not use race as a question[.]”

This study was something of a sequel to a similar one Apfelbaum and Pauker, along with other researchers, published in Developmental Psychology back in 2008. The authors found that the younger children in that sample, drawn entirely from middle- and upper-middle-class white kids in suburban Boston, actually outperformed their older peers at the question-guessing task, simply because the older (and therefore more tactful) ones were afraid to ask about race.

It would be reasonable to think that black and Latino kids wouldn’t be so wary about asking about race, that they’d be more likely to do so than the white kids in this new study. But that’s not what the authors found. Rather, while almost all the kids, regardless of race, reported having noticed the racial differences among the photos, only 40 percent of them used those differences to help them perform well in the game — and that number didn’t vary much by race. This graph nicely explains the findings, though it’s important not to get hung up on the between-groups differences in asking about race, since, again, the researchers found that they weren’t statistically significant: 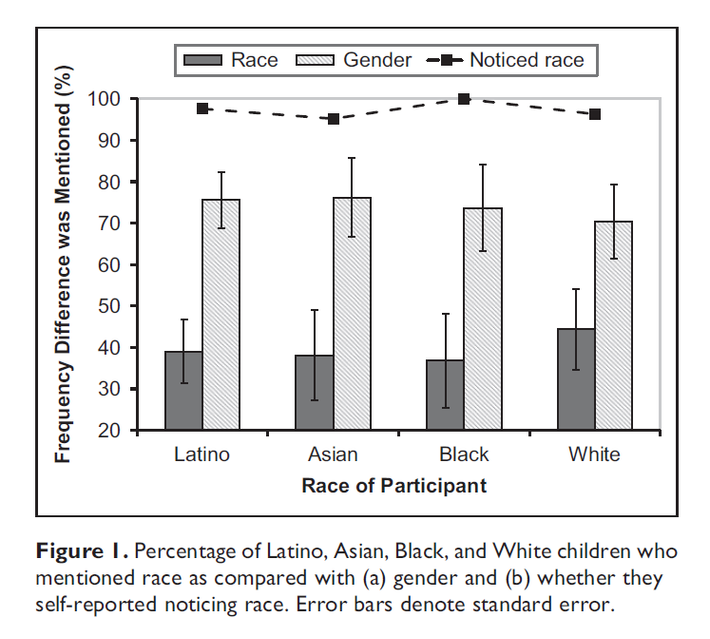 Among the kids who didn’t talk ask about race during the game, 58 percent of them (as coded by observers who reviewed the video and who didn’t know what the study was testing) said that doing so would be “inappropriate, rude, [or] offensive,” while a full 23 percent said it would be outright racist or prejudiced. “We were surprised to find that racial minority children also avoided race to the same extent [as the white kids] and espoused reasons such as trying not to appear prejudiced,” Pauker said in an email to Science of Us.

It’s striking to compare the message these kids have internalized to the social norms color-blindness is supposed to be imparting. One of the ideas behind the concept is to teach kids not to interact in a discriminatory way with each other, that it would be wrong and unfair, of course, to exclude Benjamin from your game of tag because he’s black. Socializing kids against this sort of behavior is a totally reasonable, laudable thing to do. But it’s clear, at least from these two studies involving a diverse sample of students, that the concept has bled well beyond useful boundaries. Many of the kids apparently thought it would be rude or downright racist to even point out that half the people in the group of photos were racially distinct from the other half. Something about how we teach kids about race seems to have flown off the rails.

And, as mentioned above, the researchers think this kind of schooling may hurt the kids it’s ostensibly designed to benefit:

It is troubling that pressures to adhere to color-blind norms override talk of race, even among racial minority children. Research with adults has documented the potential for color blindness to facilitate the expression of racial bias and negative affect in intergroup interaction and to perpetuate group-based inequities (Knowles, Lowery, Hogan, & Chow, 2009; Richeson & Nussbaum, 2004; Vorauer, Gagnon, & Sasaki, 2009). Moreover, research with older adolescent and college samples has found that a ‘‘race doesn’t matter’’ socialization message can interfere with positive racial identity development among Black students (Lesane-Brown et al., 2005). Our results underscore the strength of color-blind norms in schools and highlight the need for future research to consider their impact on both majority and minority children’s social development. They also illuminate a fundamental challenge facing society: Issues of race continue to be a source of controversy and contention in American society, from education and business to policing and the law, yet it remains unclear how these issues can be resolved, much less articulated, if no one is willing to acknowledge race.

There’s no easy way to solve the country’s vexing, centuries-old problems with race, but research like this highlights the serious problems and side effects that arise when you try to just sweep the problem under the rug.

When Minority Kids Are Taught Color-blindness

keeping up with the royals Yesterday at 9:07 p.m.
Prince Harry Is Happy You Quit Your Job The former royal doesn’t think a job should threaten your “mental fitness.”
crime Yesterday at 7:01 p.m.
Everything to Know About Jussie Smollett’s Trial The actor was accused of staging his own hate-crime attack in 2019. Things only got more complicated from there.
pinkie promise Yesterday at 6:25 p.m.
This Love Seems Exhausting Machine Gun Kelly and Megan Fox take the pinkie promise to the next level.
what is real? Yesterday at 5:41 p.m.
Will I Ever Watch ‘Succession’ the Same Way? This Jeremy Strong profile makes me question everything.
ikea meatballs Yesterday at 3:25 p.m.
Being Stranded at Ikea Sounds … Good? Snowed-in shoppers in Denmark had a sleepover with Christmas movies and cocoa.
we asked Yesterday at 3:09 p.m.
Taylour Paige, Rowan Blanchard, and More on Their Favorite Holiday Tradition “We Asked” is a column in which we ask different people the same funny, inquisitive (and sometimes weird) question.
always shopping Yesterday at 2:44 p.m.
16 Pairs of Work Pants You’ll Actually Want to Wear Work pants to get excited about.
maxwell trial Yesterday at 1:16 p.m.
Witness Says Ghislaine Maxwell Made Her Dress as a Schoolgirl for Epstein And more key testimony from the trial of Jeffrey Epstein’s alleged partner in sex crimes.
art basel Yesterday at 1:00 p.m.
Party Dispatch From the Big Art Show One girl, four Art Basel parties, and a determination to find out what an NFT is.
By Sangeeta Singh-Kurtz
mysteries Yesterday at 12:57 p.m.
Is Grimes Finally Ready to Publicly Roast Elon Musk? Her new song is about an ex who loves video games and space.
it's good 4 u Yesterday at 12:53 p.m.
Olivia Rodrigo Is Finally Going on Tour Can April come sooner?
scene report Yesterday at 12:46 p.m.
The Other Kind of Party Favor That Goes Up Your Nose BYO COVID-19 rapid tests.
give me chaos Yesterday at 12:09 p.m.
What’s Behind Our Thirst for Roman Roy? Enter the era of the chaos goblin.
encounter Yesterday at 12:00 p.m.
This Is Still Candace Bushnell’s City And just like that … she’s back! For ten weeks.
sex and the city Yesterday at 11:20 a.m.
Why Isn’t Samantha in And Just Like That …? All the reasons Kim Cattrall did not want to be in the Sex and the City reboot.
fashion Yesterday at 10:50 a.m.
This Is How You Make a Red-Carpet Debut as a Couple Jonah Hill and his girlfriend, Sarah Brady, wore matching blue suits to the Don’t Look Up premiere.
school shootings Yesterday at 10:25 a.m.
A 15-Year-Old Allegedly Opened Fire at a Michigan High School The parents of alleged shooter Ethan Crumbley have been arrested and charged after a manhunt.
auto-refill Yesterday at 10:13 a.m.
The Beauty Products This Longtime Editor Uses to the Last Drop A $10 hair spray pushes Leah Wyar’s visits to the colorist from five weeks to three months.
By Daise Bedolla
#metoo Yesterday at 9:45 a.m.
What We Know About the Disappearance of Peng Shuai After accusing a top Chinese government official of sexual assault, the tennis star’s whereabouts have become the source of international concern.
gift guides Yesterday at 9:00 a.m.
The Best Holiday Gifts to Buy This Year Thoughtful ideas that everyone on your list will love.
By the Cut
More Stories