All throughout fashion month, the Cut will be ranking street-stylers on their outfits, ultimately bestowing a coveted Golden Peacock award on one winner for each city. Photographer YoungJun Koo will be shooting all of our contestants, and Cut contributor (and last year’s winner!) Shiona Turini is back to help narrow down our top five. We have our own winner of the day, but we can’t decide on the Golden Peacock champion without your help, so vote below for your favorite!

We’re heading into the homestretch of New York Fashion Week, which is typically the point when most people (like us!) are ready to give up and wear pajamas. Obviously the Peacocks would never succumb to such a temptation. Yesterday’s top outfits ranged from the sleek and cool to absolutely over-the-top. If you couldn’t guess, Anna Dello Russo was on team excess, wearing a dramatic ruffled Rosie Assoulin look first thing in the morning. For the minimalists, Annina Mislin is your new spirit animal. She chose a sleek black tasseled top paired with crisp white trousers and a scarf-meets-choker. And rounding out the top five are some wildcards so new, we don’t even know their names. Click ahead to see the best of day five, and vote! 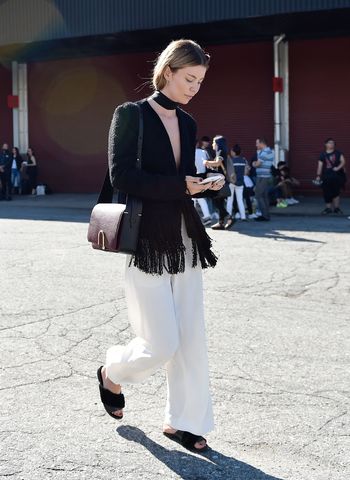 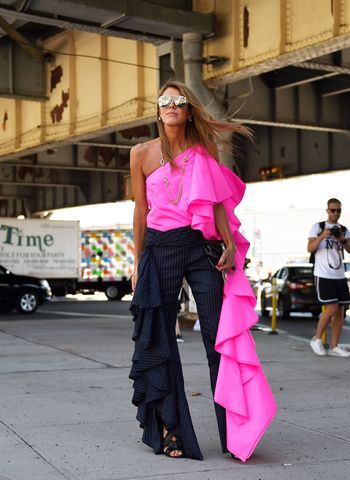 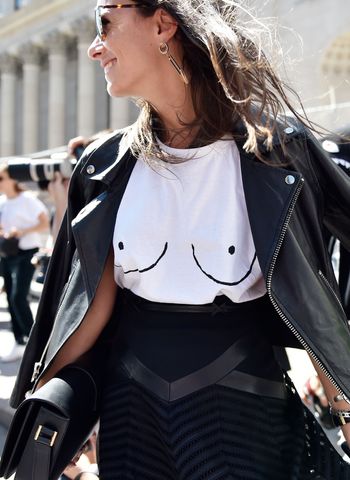 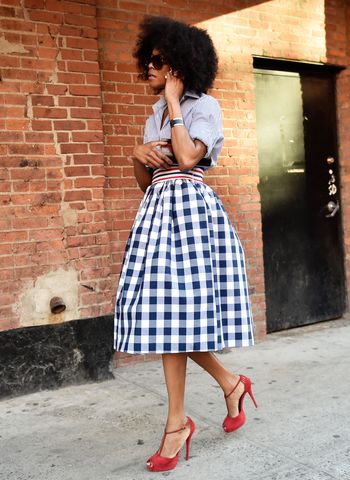 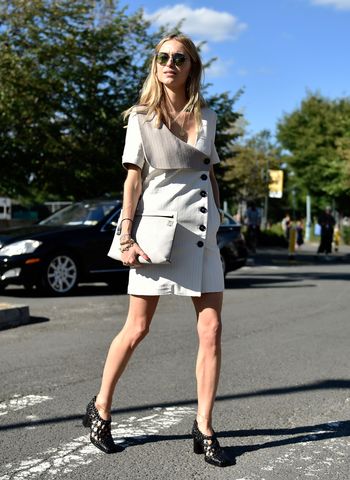 The mix of striped shirt and gingham skirt is so refreshingly normal and chic that we had to give this mystery girl the fifth spot. Who says street style doesn’t translate into real life?

Her Céline woven heels are another example of a street-style star repeating their bait. Coincidentally, they also work really well with her dress, earning her the bronze medal.

Dior catsuit for day four, dramatic Rosie Assoulin ruffles at 11 a.m. on day five. Oh, and then she changes again by 1 p.m. for Jeremy Scott. All in a normal day’s work for ADR.

Annina’s style is minimal, chic, and the opposite of peacocking — which is why it works so well. This combination of a fringed top, a choker scarf, and white pants feels especially fresh, earning her our win. Congrats!

Vote for the Top Street-Style Star of Day 5

breakups Yesterday at 6:27 p.m.
Michelle Branch Files to Divorce the Black Keys’ Patrick Carney She took the step a day after announcing their split online.
celebrity weddings Yesterday at 5:44 p.m.
Bennifer Is Getting Married (Again) The follow-up party to their small Vegas wedding is happening this weekend in Georgia.
celebrity Yesterday at 5:13 p.m.
Bella Hadid Isn’t Afraid to Speak Out About Palestine Anymore The model said many companies have stopped working with her following her advocacy.
hairy situations Yesterday at 5:00 p.m.
The Best Dandruff Shampoos for Every Kind of Hair From curls to color-treated.
By Asia Milia Ware, The Cut, and Chinea Rodriguez
wtf Yesterday at 1:38 p.m.
Bryce Dallas Howard Confirms Huge Pay Disparity on Jurassic World “I was paid so much less than the reports even said.”
celebrity Yesterday at 12:46 p.m.
Adele Says She ‘Might As Well Be Married’ to Rich Paul “I’m not engaged. I just love high-end jewelry, boy!”
cut covers Yesterday at 12:08 p.m.
Amandla, Amandla, Amandla The Bodies Bodies Bodies star is the Cut’s July-August 2022 cover star.
By the Cut
gross! Yesterday at 11:56 a.m.
Who Told the GOP About ‘BDE’? A gubernatorial candidate claims Ron DeSantis has it. Of course he doesn’t.
obits Yesterday at 10:04 a.m.
Anne Heche Has Died at 53 The actor suffered severe injuries after a car crash in L.A. earlier this month.
flying high Yesterday at 10:00 a.m.
The Ultimate Celebrity Perk? Climate Disaster. The Twitter account @celebjets gives us insight into Kylie Jenner’s 17-minute flights.
power Yesterday at 10:00 a.m.
Everything to Know About the WNBA Star in Russian Custody Amid ongoing prisoner-swap negotiations between the U.S. and Russia, Brittney Griner’s legal team has appealed her conviction.
garment district Yesterday at 8:00 a.m.
How to Be a Fashion Designer: Sewing Not Required Oluwole Olosunde’s curriculum offers a wide-ranging crash course on the fundamentals of building a brand in the Instagram era.
how i get it done Yesterday at 7:00 a.m.
How Kerry Washington Gets It Done “I’m not good at compartmentalizing and only bringing part of myself into a room.”
By Faith Cummings
astrology Aug. 14, 2022
Madame Clairevoyant: Horoscopes for the Week of August 15 As Mars enters mercurial Gemini, you may find yourself easily distracted. Fighting it will only make it worse.
By Claire Comstock-Gay
sex diaries Aug. 14, 2022
The Artist Who’s Not Sure She Loves Her Comedian Boyfriend This week’s sex diary.
r. kelly Aug. 14, 2022
R. Kelly Denies One of His Alleged Victims Is Pregnant With His Child After identifying herself as the singer’s fiancée, Joycelyn Savage claimed she’s pregnant with his child.
rip Aug. 14, 2022
Freya the Walrus Was Too Good for This World The summer icon has been euthanized by Norwegian officials.
rust Aug. 14, 2022
Everything We Know About the Rust Shooting An FBI report concludes that the trigger must have been pulled.
shopping Aug. 12, 2022
The $6 Brow Product That Changed My Eyebrows It took me almost a decade to find the perfect brow product.
fashion Aug. 12, 2022
Julia Fox Is Back! And she is giving us the latex looks we’ve been so thirsty for.
More Stories