Now that fashion month has come to an end, what do we make of the hundreds of shows and presentations we’ve seen? It was a maximalist’s heaven, where no sparkle was too excessive, no frills too frilly, and even denim got the luxe treatment (embellishment, prints, sequins!). Romantic notions of lingerie and ruffles were everywhere, and shoulders will be the erogenous zone of the season.

Not feeling the softness that wafted over the runway? Sporty stripes and tracksuits are there for you. Click the slideshow ahead to get a grasp on the season’s ten biggest trends and start to fantasize about what you’ll be wearing next spring. 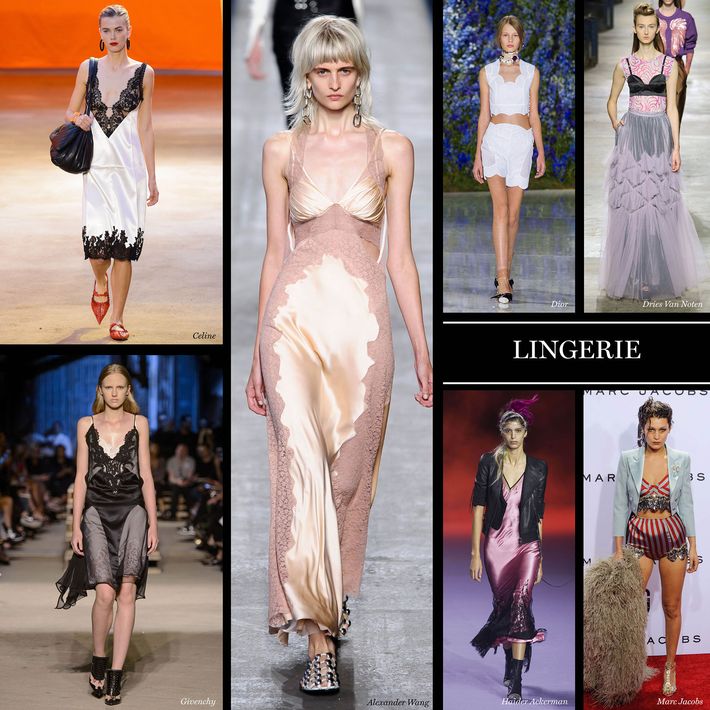 Unanimously, the biggest look of spring comes from the boudoir. This sexier aesthetic appeared as silk negligee-style dresses, many in gleaming satin trimmed in lace, at Céline and Givenchy, while at Dior it took the form of more chaste (but still alluring) cotton underpinnings. 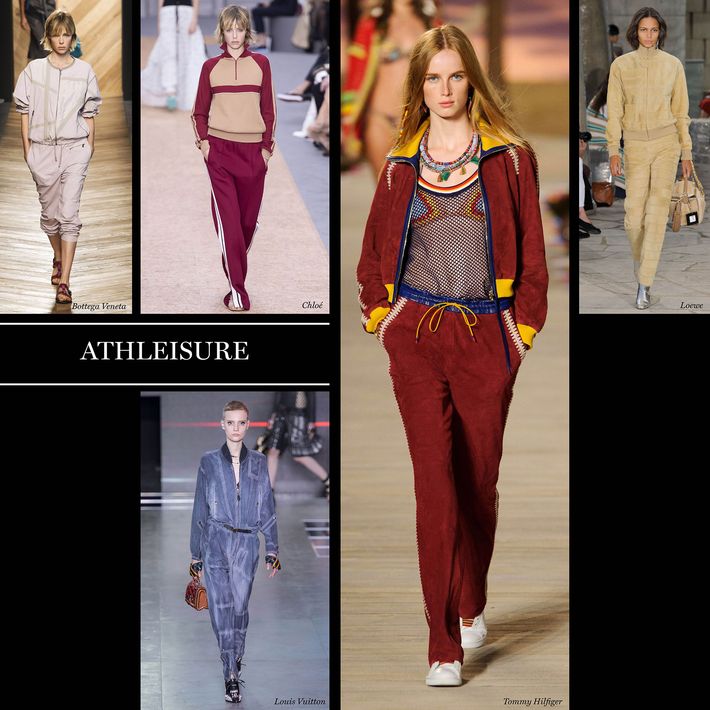 Never has fashion seemed so relaxed. Tracksuits, track pants, and other easy pieces appeared at runway shows like Loewe, Bottega Veneta, and Chloé. The tracksuit has made a strong case for uniform dressing of the most comfortable kind. 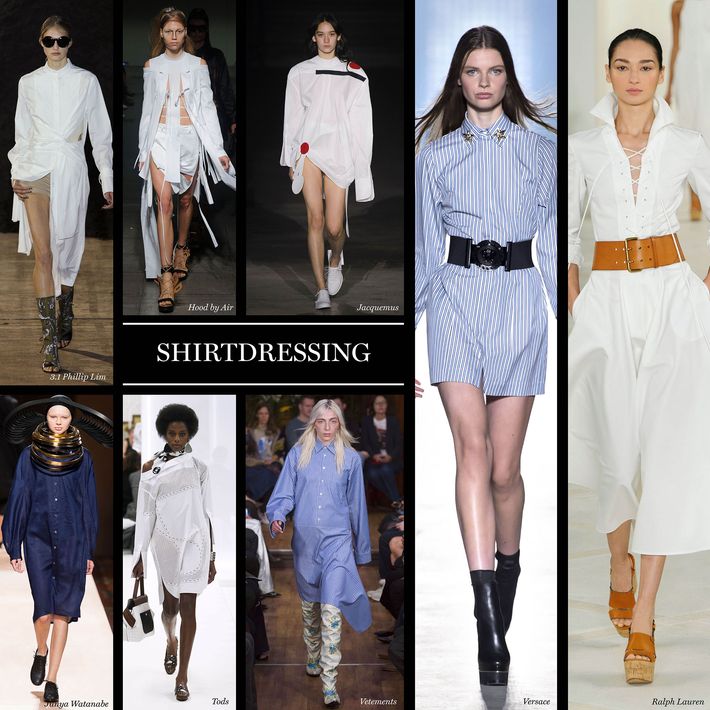 The no-brainer shirtdress came in many iterations, offering something for both conservatives and exhibitionists. From super-short in banker-blue stripes at Versace, to twisted with extra-long cuffs at 3.1 Phillip Lim, to shredded, to collar popped and laced up the front at Ralph Lauren Collection, there were many takes on the closet staple. 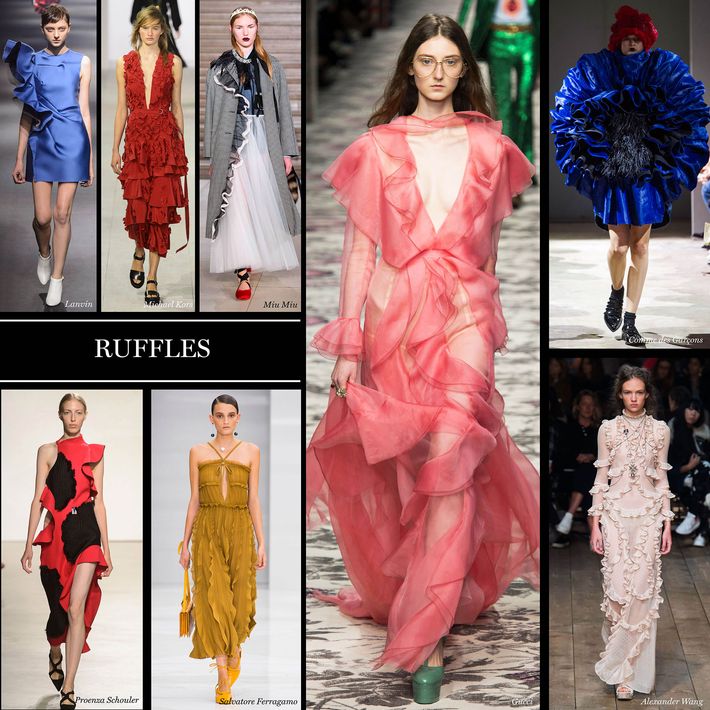 This was one of the more romantic seasons we’ve seen in years, with a strong sense of femininity wafting over the runways. While fall’s Victorian trend was still apparent in the spring shows, we now have boudoir inspirations, ribbons worn in the hair, and ruffles — lots of them. Tiers of ruffles trimmed bodices at Proenza Schouler, ran over and under outerwear at Miu Miu, and decadently bloomed into an allover flounce at Comme des Garçons. 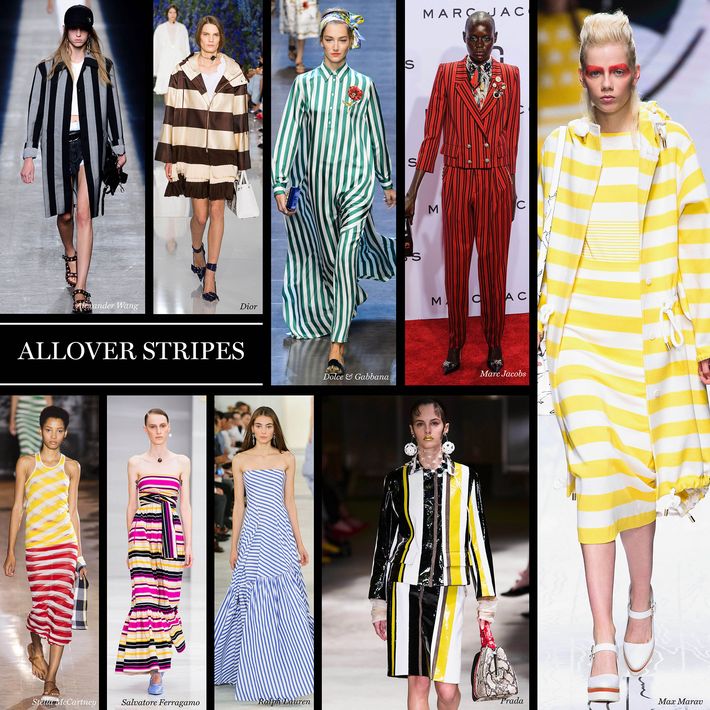 Stripes were everywhere (though particularly popular in Milan), covering suits, sundresses, and coats, and appearing both vertically and horizontally. A nod to a sportier look, and in bold, bright colors, some of our favorites were at Prada, Dolce & Gabbana, and Salvatore Ferragamo. 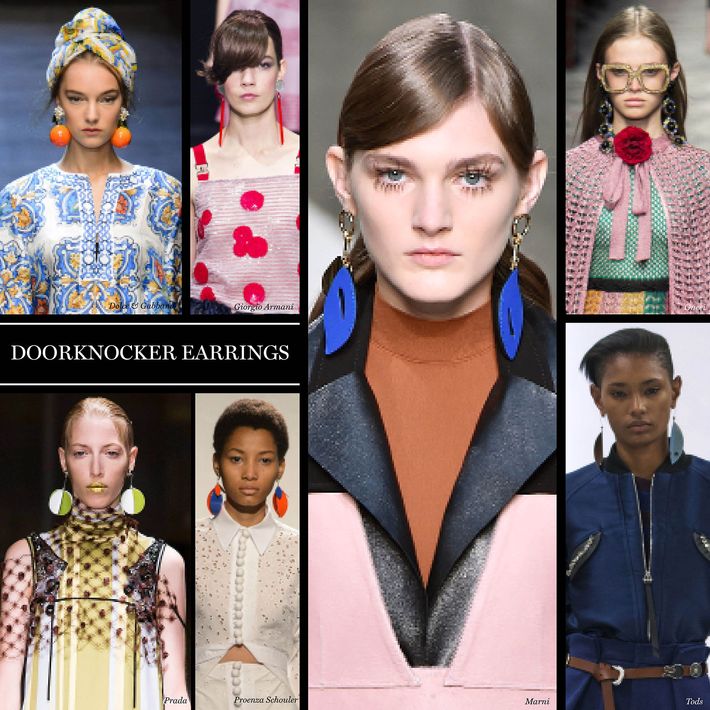 If you’re going to invest in any piece of jewelry come spring, make it a pair of standout oversize earrings. It’s the easiest way to dress up an outfit using an accessory. As nice complements to all the focus on shoulders (which also elongates the neck — it’s a sexy season), they provided whimsy and attitude at shows such as Proenza Schouler, Marni, and Gucci. 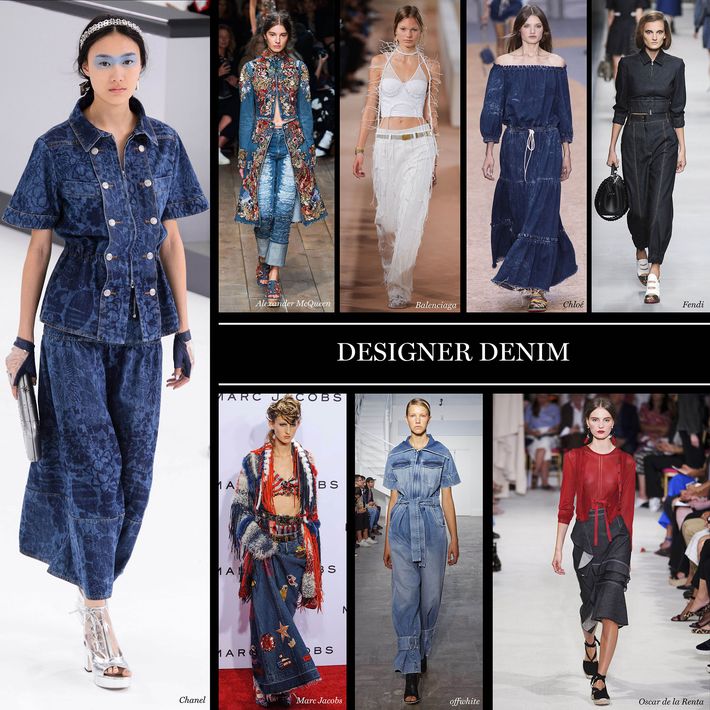 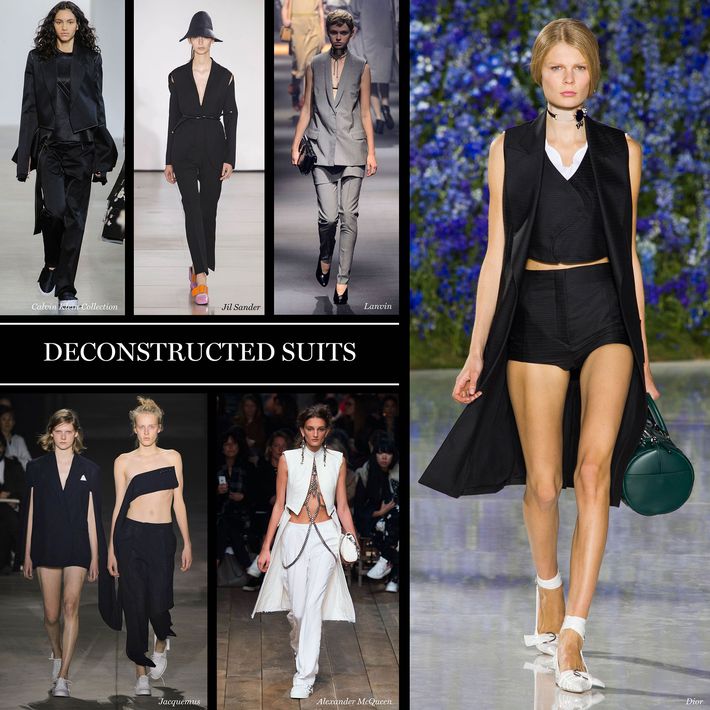 The new suit is anything but traditional. Twisted takes on tailoring were a more conceptual idea during the shows, but one we think will build into next fall as well. Whether it was a sexier version of a three-piece suit at Dior, double-faced satin with cutaway blazers gloriously layered at Calvin Klein Collection, or a skirted pant worn with a sleeveless jacket with frayed sleeves at Lanvin, these suits look more at home on the runway than behind a podium at the next presidential debate. 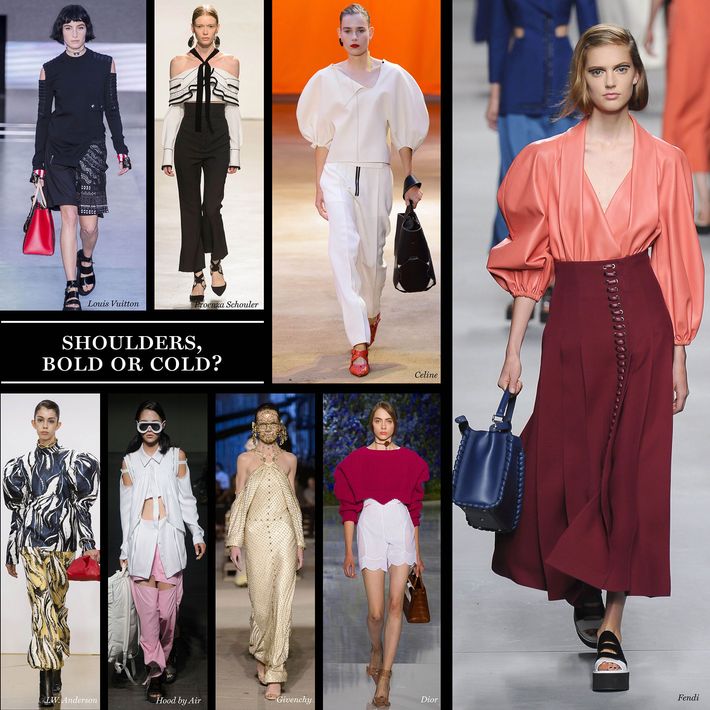 The ever-popular off-the-shoulder tops that won summer are already a thing of the past. Shoulders for spring are either largely exaggerated (see: J.W. Anderson’s leg-’o’-mutton sleeves) or come with cutouts (peekaboo cutaways at Louis Vuitton, mid-level ventilation at Hood by Air, or full exposure at Proenza Schouler). Whether they’re puffed or public, you’ll be paying attention to your shoulders like never before. 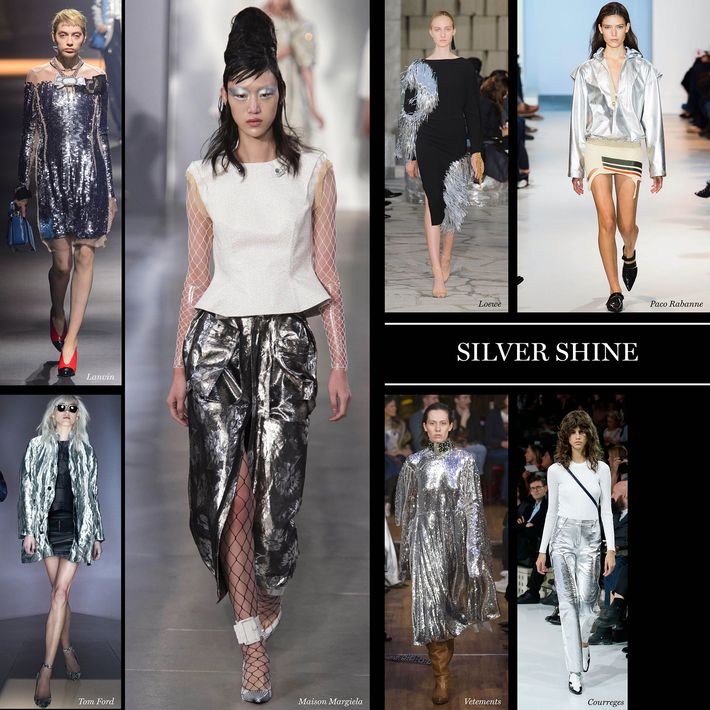 Sequins, Lurex, patents, and lamé dominated fall’s shiny leanings, but spring has calmed down — a bit. The metallic of the season is silver, with mercury rising anywhere from sequined dresses at Vetements and Lanvin to tinsel-trimmed pieces at Loewe to a slick leather jacket appearing in Tom Ford’s music video show.

The 10 Trends You’ll Want to Wear Next Spring

See All
ask a boss 12:00 p.m.
‘My Co-worker Hijacks Our Meetings With Endless Questions’ It’s hard to tell someone to talk less, especially in a spur-of-the-moment conversation that you aren’t prepared for.
always shopping 11:48 a.m.
Wardrobe Essentials Picked Out for You MatchesFashion has helpfully assembled an edit.
auto-refill 11:46 a.m.
A Makeup Artist on Her 11 Favorite Beauty Products Including the one that gives you a “J.Lo glow.”
By Daise Bedolla
why is your skin so good 11:37 a.m.
How This Director Gets Her Skin So Good Isabel Sandoval has been using the same sunscreen for six years.
afterimages 11:30 a.m.
Those Guillotines Are Awfully Close to Your Neck A punk niche for this violent moment.
By Stella Bugbee
the cayman islands 11:15 a.m.
Armie Hammer Says He’s ‘Genuinely Sorry’ for Calling Woman ‘Miss Cayman’ in Vid The Miss Cayman Universe Committee released a statement saying that it was “very disturbed by the video.”
celebrity 10:56 a.m.
Ben Affleck and Ana de Armas’s Breakup Photos Could Not Be More Perfect The relationship seems to have ended as it started — with an incredibly staged paparazzi photo.
fixations 9:30 a.m.
I Think About These 2008 Gossip Girl Ads a Lot I felt guilty for watching innocent kisses on TV, but it was okay to display soft porn on public transit?
By Mycah Hazel
how i get it done Yesterday at 7:00 a.m.
Meena Harris Would Like to (Politely) Remind You That She Is ‘Not Kamala’ She is a CEO, entrepreneur, children’s book author, lawyer, and mother. Here’s how she gets it done.
By Jane Starr Drinkard
astrology Jan. 17, 2021
Madame Clairevoyant: Horoscopes for the Week of January 18 Aquarius season begins this week!
By Claire Comstock-Gay
sex diaries Jan. 17, 2021
The Happily Partnered Woman Who Dreams of Having a Threesome This week’s sex diary.
recalls Jan. 17, 2021
Beware the Hot Pockets The USDA has received reports of “pieces of glass and hard plastic” buried inside some pepperoni pockets.
review Jan. 17, 2021
Men in Tights Miucca Prada and Raf Simons introduce the idea of a onesie.
By Cathy Horyn
burning questions Jan. 17, 2021
Just How Many Cats Might Elon Musk ‘Owe’ Jamie Lynn Spears? “The Tesla is a secret cat-killer, and it’s a problem that we really gotta fix,” Spears said in a now-retracted Instagram video.
information Jan. 17, 2021
Do You Have Some Questions About Cannibal Fetishes? An expert on kink explains everything.
livestream Jan. 17, 2021
Watch the Prada Menswear Show Livestream Enjoy!
tv Jan. 15, 2021
Bling Empire Is Selling Sunset With More Billionaires The year’s first reality hit follows a group of wealthy Asian and Asian American people living in L.A.
a beautiful life Jan. 15, 2021
Jason Wu Is Ready to Dress Faces Now Talking to the designer about his new beauty brand.
screen time Jan. 15, 2021
A New Dawn for Bodycon And other trends I’ve noticed in my feed this week.
By Emilia Petrarca
politics Jan. 15, 2021
Everything You Need to Know About Inauguration Day On January 20, Joe Biden and Kamala Harris will become president and vice-president. Here’s how to watch the ceremony and what to expect.
More Stories