I came to Paris to write about Fashion Week beauty and in my spare time to eat buttery carbs and discover French pharmacy secrets. But you cannot visit Paris without touring the cultural institutions, of which there are between ten and 100, depending on whom you ask. Yesterday, I stumbled into what is surely the 101st: The Abercrombie & Fitch store on the Champs-Élysées.

If you’re American, I know what you are thinking. Who cares about this saddening and dated retail chain? But French Abercrombie & Fitch appears to exist in an alternate reality where the Mike Jeffries years never happened. My first clue came from the entrance, an ornate, gold- and black-plated gate like those in front of French diplomatic residences. As with the American stores, it was guarded by man-candy, in this case an approachable, handsome Frenchman (sort of like your cutest biology partner from high school) who was fully clothed (he was wearing a puffer vest). Despite this startling sight, no one was taking pictures with him, or of the entrance. 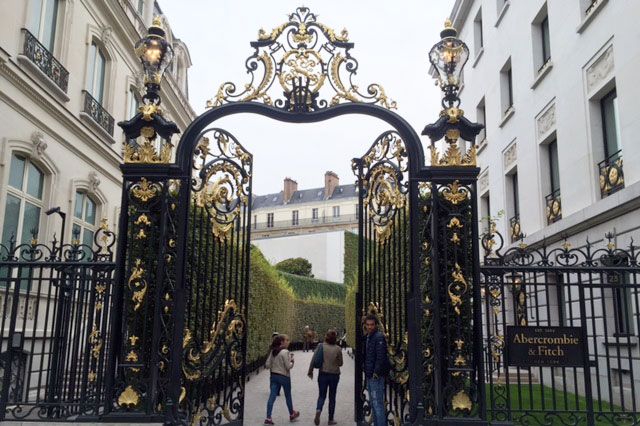 To enter the store, you must pass through the gilded gate and follow a winding path strewn in fine slate-gray gravel through perfectly manicured, ten-foot-high hedges. For a minute, I wondered if I’d somehow stepped into Valentino’s estate, which I have not visited personally but once witnessed in the “Kim’s Journey to the Altar” episode of Keeping Up With the Kardashians, which is nearly the same thing.

But then I was stopped by the unmistakable familiar smell of Fierce, A&F’s signature cologne, which exists to torment customers even in this bizarro Abercrombie. Once inside, I heard a mom pinch her nose and complain to her husband that the “cologne trop.” (She should have smelled it before it was reduced by 25 percent.)

Beyond the winding Versailles walk is another black-and-gold ornate door. This was guarded by yet another fully clothed greeter and opened to reveal a large mural, the style of which is best described as “the cover of Atlas Shrugged but with more color.” It depicted two bare butts, 12 abs, and 16 back abs, compiled from a total of four strapping men. Hey, Abercrombie’s sexualized marketing ban only mentioned “in-store photos” — it never said anything about in-store frescos. 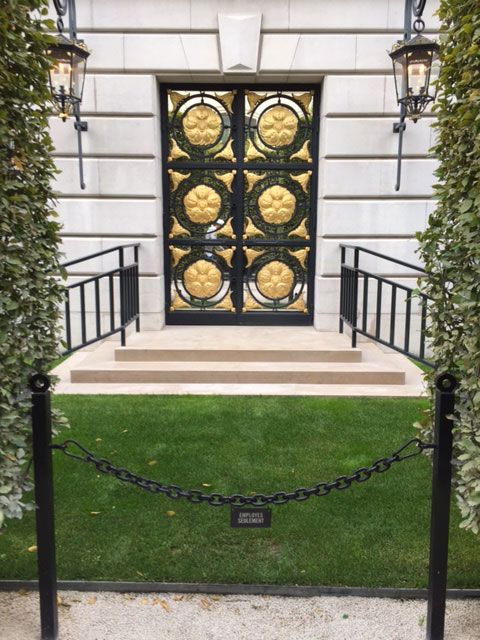 This Abercrombie wonderland is four floors, two of which I roamed trying to charge my dead phone. The store was very, very busy. I had assumed that most of the people visiting would be from outside France, but in the 40 minutes I spent in the store, French was the language I heard most often.

Unlike their American counterparts, who spend their time idly pretending to fold clothes and mumbling “Sorry” when you ask them questions, the French salespeople were running around at a frantic clip, getting new sizes and being genuinely helpful. Four salespeople greeted me with “Bonjour” (I guess “Hey, how’s it going” doesn’t easily translate) before I surreptitiously managed to locate an electrical outlet. One even said “Je suis désolée” with profound empathy while telling a woman that the V-neck moose T-shirt doesn’t come in red. 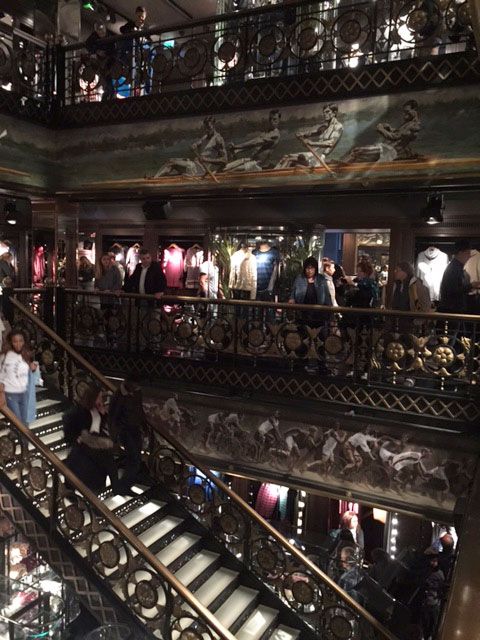 The company allegedly no longer hires for physical attractiveness, but the salespeople were far from homely. One could have been Imaan Hammam’s brother. The men were all cutely boyish — no Bruce Weber musclemen in sight. All wore distressed torn jeans, pairing them with either cool Timbs, oxfords, or hightop Nikes. Alas, a few unlucky souls had to wear CEO footwear (a.k.a. flip-flops), making them possibly the only four people in all of Paris to wear rubber thongs.

However, even the French can’t really make Abercrombie clothing chic. The clothing assortment appeared to be largely the same as in the U.S., apart from a small display on the first floor of Paris Abercrombie T-shirts. These did not seem to be very popular, perhaps because people are here to buy into this controversy-free version of Americana collegiate prep. Getting a French T-shirt would defeat the point. 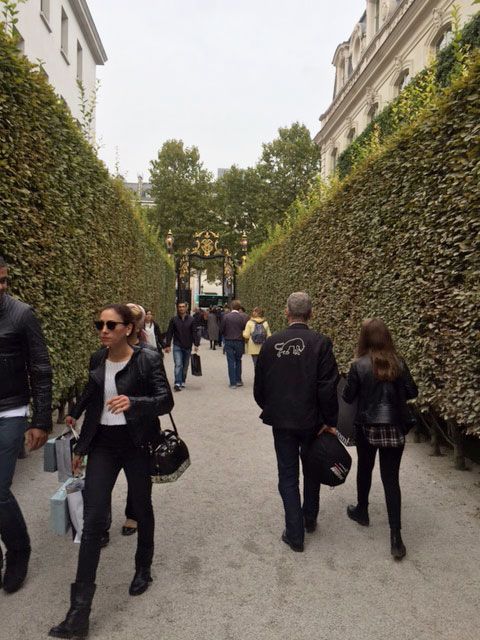 After 40 minutes, my phone finally reached an acceptable level of power and the level of Fierce began to get to me. As I exited Le Palais d’Abercrombie, I witnessed some tourists taking selfies. Beyond the ivy hedge, I heard a man ask the greeter about the brand. “Il est de la Californie,” he said. I didn’t have the heart to tell him even in this alternate reality, he probably meant Ohio.

power 22 mins ago
Evan Rachel Wood Says Marilyn Manson ‘Essentially Raped’ Her On Set In her new documentary, she said Manson penetrated her while filming a 2007 music video.
culture 8:41 p.m.
And Just Like That… We’re Being Threatened With A Season 2 Sources say those involved are “feeling good” about a possible return.
fashion 7:06 p.m.
Thierry Mugler, Fashion’s Greatest Showman The designer, who died Sunday, was force in ‘80s fashion. A new wave of celebrity fans and a museum retrospective have brought his influence back.
By Matthew Schneier
in memoriam 6:42 p.m.
13 Out of This World Thierry Mugler Looks From inventive silhouettes to theatrical productions, Mugler’s unique approach to glamour will be celebrated forever.
sorry to this man 6:05 p.m.
Doubt Taylor Swift’s Songwriting at Your Own Peril One cannot simply insult her skills.
euphoria 6:04 p.m.
11 Pieces You Can Shop From Euphoria Episode 3 Including Miu Miu, Reformation, Coperni, and By Far.
friendship 5:02 p.m.
Javier Bardem, Please Plan My Birthday Party Commitment is jumping out of a cake dressed as a Bond girl for Daniel Craig.
valentine's day 2:28 p.m.
The 16 New Sweethearts Phrases, Ranked The theme is “words of encouragement.” Gross.
culture 2:17 p.m.
Sometimes Violence Is the Answer All hail Ashtray.
celebrity couples 12:42 p.m.
Kanye West and Julia Fox’s Paris Fashion Week Dress-up Tour Featuring a pair of boots we’ve seen on Kim Kardashian West before.
conspiracies 12:38 p.m.
Why Do TV Characters Keep Having Peloton Heart Attacks? Billions has given us yet another instance of stationary bike-induced cardiac arrest.
self 10:00 a.m.
I Was a Therapist for Sex Offenders When I Realized: I Survived Larry Nassar On the anniversary of Nassar’s sentencing, one survivor reflects on the moment the truth hit her — and all the moments since.
in memoriam 9:41 a.m.
Thierry Mugler Has Died The iconic French fashion designer was 73.
self 8:00 a.m.
‘I May Be Bisexual,’ From Rachel Krantz’s Memoir, Open Writer Rachel Krantz investigates her own sexuality through indulging her partner’s fantasy.
how i get it done 7:00 a.m.
How White House Press Secretary Jen Psaki Gets It Done From advising the president to toaster waffles and Emily in Paris.
By Andrea González-Ramírez
astrology Yesterday at 8:30 p.m.
Madame Clairevoyant: Horoscopes for the Week of January 24 Mars, Venus, and Mercury will all be in level-headed Capricorn, and Venus retrograde comes to an end.
By Claire Comstock-Gay
sex diaries Yesterday at 8:00 p.m.
The Art Teacher Quarantining With a Fling Who Gave Her COVID This week’s sex diary.
celebrity Yesterday at 6:18 p.m.
Bella Hadid Says She’s Not Drinking Alcohol Anymore Here’s why.
the de armas cut Yesterday at 4:34 p.m.
Ana de Armas Was Edited Out of Yesterday, So Fans Are Suing Before you ask, this was not the work of the Ana de Armas Updates stan account.
power Yesterday at 4:18 p.m.
New Zealand PM Jacinda Ardern Cancels Her Wedding Due to Omicron “I am no different to, dare I say it, thousands of other New Zealanders.”
More Stories