Some of the cast from the upcoming Ghostbusters movie. Photo: Hopper Stone/Sony Pictures

Our psychic guide, Stacy, has stopped our group in this spot near a baseball diamond because she sensed a murder occurred here — a “robbery gone wrong,” as she calls it. She’s had contact with the supernatural world since she was a child, and says her experience is best portrayed by the character Deanna Troi in the cult sci-fi series Star Trek. She hasn’t been on The Dr. Oz Show or anything, but she has been in the green room.

“Any ghosts wanna party with us?” the bearded man asks to deafening silence. Perhaps sensing that he should take communing with the dead a little more seriously, he offers, “How do you feel about gentrification?”

There’s a suspicious movement nearby, but it’s just two bored bike cops begrudgingly keeping an eye on us. A tall girl in a camel coat chugs from a giant box of wine that people have nicknamed “the spirit box.” People are getting restless, probably because our first attempt at summoning a ghost ended with someone’s phone playing Drake when we asked the ghost to give us a sign (it wasn’t “Over My Dead Body”). A guy who works at Avon throws salt on me, and rumors begin to spread that there’s an angry homeless guy in the nearby porta-potty. Spooky!

The Brooklyn Paranormal Society is a diverse group of people who appear to possess varying degrees of belief in the spirit world. Most attendees heard about the meet-up from Reddit, and tagged along even though they’re strongly skeptical. Others are begrudging believers in the paranormal world, like one attendee, who says he began believing in ghosts when a face showed up in the wrinkles of his coat. (He shows me a picture; it’s not particularly convincing.)

The group was started only a few weeks ago by Anthony Long, a 20-something programmer wearing a Goosebumps hat who said he came up with the idea while drinking with friends.

“We’ve been told that drinking while ghost-hunting is not the best idea because it allows spirits to enter your body easily and to that I say: Bring it on,” he told me on the phone the week before the event. “At the end of the day I’m looking for that experience. “

“Wouldn’t doing LSD be a lot easier than letting a ghost inhabit your body?” I asked.

“It’s not as much fun and it doesn’t make for as good of a story,” Long said.

After it becomes painfully clear that the ghosts in that part of the park are rudely ignoring us, we trek to another area, where a man wearing a silver rosary decides he will do some sketching. He plops down a weird wooden box and crouches on the ground. “What is that?” I ask.

“It’s a reliquary from France that used to hold bones,” he responds, as if that’s a totally normal thing everybody has and carries with them. He takes out some charcoal and begins drawing. He finishes his sketch and holds it up to the crowd.

“From this angle, it kind of looks like Macho Man Randy Savage,” offers Anthony.

By now it is getting late, and my feet hurt, and the scariest thing about the park is the weird French bone box, which I’m not really feeling like being around. As the group trudges on toward a Quaker cemetery, I veer off beneath a canopy of trees that smell like Cheetos, and the candles disappear into the night. I pull out my phone to locate the nearest subway, and there it is: an email from an unknown address, with the subject line “I NEED HELP” sent right around the time I would’ve been actively attempting to commune with spirits. 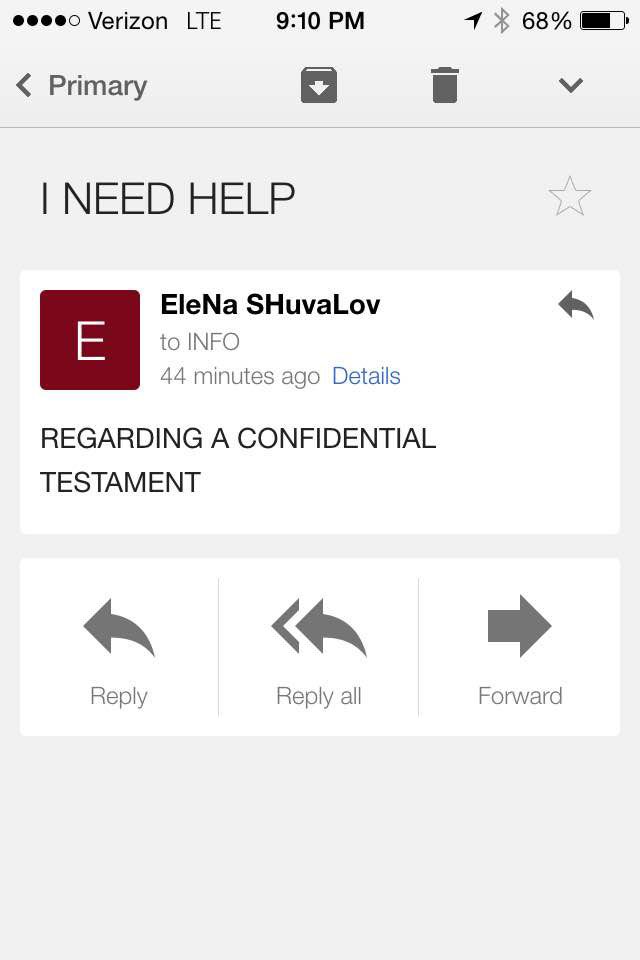 I guess ghosts prefer communicating via email, too.