Methinks these ads are genius.

Last week, menstrual-underwear maker Thinx said it was having a hard time getting its subway ads past the MTA’s advertising gatekeeper Outfront Media. Outfront initially told Thinx that the ads’ egg-and-grapefruit imagery imagery seemed “inappropriate,” but a spokesperson for the MTA downplayed the exchange, telling the New York Times that the ads would go through. Now, after social media outrage about the dust-up, Thinx CEO Miki Agrawal reports that the ads have been approved.

The ad campaign will take over the entire Bedford Avenue L train station starting on Monday, November 9. Launching in Williamsburg was a strategic decision, Agrawal told the Cut: “All these creative-type people are there, there’s a lot of cool co-working spaces. It’s the creative mavens — the people who change culture, the culture-shifters. They’re all at the Bedford L subway stop.” 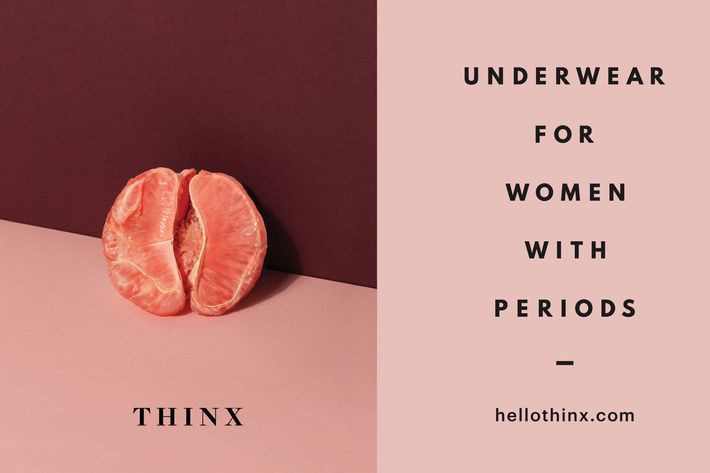 The images will be seen by an even wider group of riders next year. In February, Agrawal says that the Thinx ads will appear in one of every ten subway cars, taking over one side of the interior.

For those who were unfamiliar with the company before last week, Thinx makes what it calls “period-proof” underwear using a patented four-layer system that wicks away fluid and traps it inside until cleaned. They can be used as a leak- and stain-resistant backup to tampons or menstrual cups, or be worn alone if you prefer. The four styles — including a new sport option near to Agrawal’s heart as a former collegiate and pro soccer player — come in black or nude, but both colors smartly have a black gusset. “It’s beautiful lace underwear … there’s no ‘this or that,’ it’s ‘and.’ It can function and look great.” 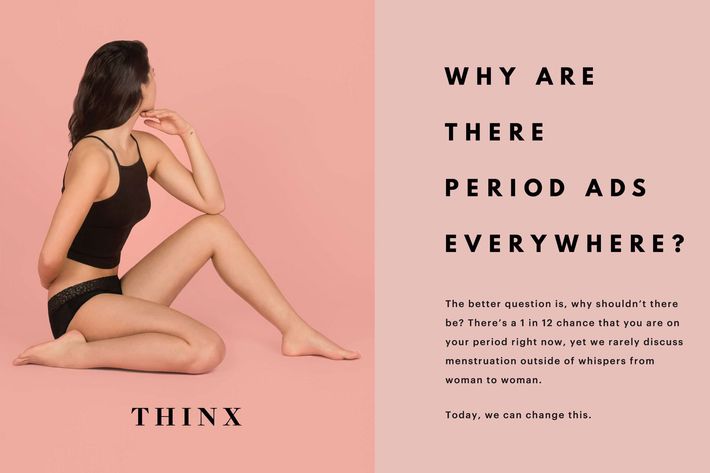 chaos 9:14 a.m.
Swifties Are Suing Ticketmaster Over the Eras Ticket Fiasco “Ticketmaster messed with the wrong fan base.”
reasons to love new york 8:00 a.m.
New York Attracts the World’s Most Beautiful People  The only person hotter than my doula and my barista? My mom’s doorman.
By Alyssa Shelasky
reasons to love new york 8:00 a.m.
Bossa Nova Social Club, Bushwick’s ‘Techno Cheers,’ Came Back You can’t burn down cool.
reasons to love new york 8:00 a.m.
There’s Always Room for a Few More New Yorkers Meeting asylum seekers at Port Authority.
reasons to love new york 8:00 a.m.
No Matter Where You Live, New Yorkers Can Help You Get an Abortion And we’ll pay for it, too.
alexa play 8:00 a.m.
The White Lotus Theme Song Is an Absolute Banger The only music worth listening to right now.
reasons to love new york 8:00 a.m.
How Resale Saved New York Retail Many of the most exciting and original new stores to open recently carry vintage and secondhand clothing.
By Emilia Petrarca
2022 fashion year in review 7:00 a.m.
The 32 Most Absurd Accessories of 2022 From joots to balloon shoes.
how i get it done 7:00 a.m.
How New York Times Parenting Columnist Jessica Grose Gets It Done “Raising the next generation is and should be a concern to everyone.”
astrology Yesterday at 8:30 p.m.
Madame Clairevoyant: Horoscopes for the Week of December 5 A full moon in Gemini may run amok.
By Claire Comstock-Gay
sex diaries Yesterday at 8:00 p.m.
The Vermont Woman Who Blows Off Work for a Tinder Date This week’s sex diary.
society pages Yesterday at 2:01 p.m.
Chaos Reigned at Art Basel A surge of outsize egos descended on Miami in the name of art (?) last week.
By Marlowe Granados
mom-ologues Yesterday at 10:03 a.m.
Keke Palmer Turned Her SNL Monologue Into a Pregnancy Reveal Baby, this is Keke Palmer’s baby bump.
gone sale-ing Dec. 2, 2022
10 Things You Don’t Have to Pay Full Price for This Weekend Deals from Neiman Marcus, Farfetch, Sephora and more.
art basel Dec. 2, 2022
Suchi Reddy Actually Likes Art Basel for the Art Her latest installation was inspired by the Miami clouds.
are u coming? Dec. 2, 2022
Art Basel Was Made for Madonna And I’m almost too hung-over to write this dispatch.
By Brock Colyar
5 questions with... Dec. 2, 2022
Meet the Black Woman Who Built a 15-Year-Old Fashion Business Sherri McMullen’s Oakland luxury store is one of a kind. Here’s how she did it.
art basel Dec. 2, 2022
Pharrell, Gigi Hadid, and More of the Bestest Party Pics This Week Celebrating with Fendi, Saint Laurent, and more.
uvalde Dec. 2, 2022
What We Know About the Police Response to the Uvalde Shooting A class-action lawsuit by survivors against law enforcement asks $27 billion for “indelible and forever-lasting trauma.”
celebrity couples Dec. 2, 2022
Finally, the Good Morning America Romance We Deserve Amy Robach and T.J. Holmes are now New York royalty.
More Stories