Newly sworn-in prime minister of Canada, the smiley man of the swept-back hair — Justin Trudeau, a.k.a. the Other Canadian Justin, a.k.a. JT — made good on a campaign promise today, announcing that his new cabinet is made up of 50 percent men and 50 percent women.

Maryam Monsef, a 30-year-old democratic institutions minister and new MP from Peterborough, told the Huffington Post Canada on Tuesday, “The more diverse your organization, your board, or, in this case, cabinet, the more it reflects the realities of the population we are serving, and that can only be a good thing.”

The 31-member cabinet was sworn in today in Ottawa, and Trudeau (who is also an avid boxer and fancy dresser) is its 31st member. When asked why he made such a pointed decision, the dreamboat responded, “Because it’s 2015.” We didn’t think it could get any better than when the PM tweeted “I am a feminist. I’m proud to be a feminist,” but Canadians are full of surprises.

What’s next for Trudeau — getting Rihanna to release her new record next week? 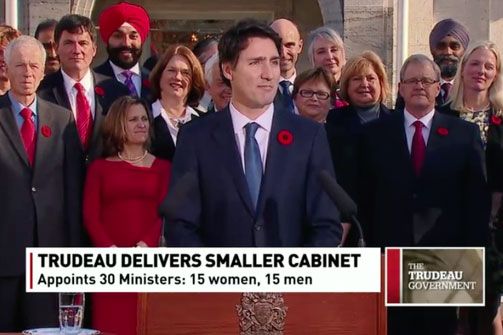