Part of the recent controversy (and media hysteria) over campus activism has centered around the question of free speech. While protesters at Wesleyan, Yale, and Amherst, for example, have argued that their concerns run much deeper than any one incident, in all three cases some activists were undeniably galvanized and mobilized by specific pieces of writing — a column, an email, and a flyer, respectively. In all three cases, they expressed outrage at the conservative viewpoints expressed and demanded that the authors of the materials be punished in some way (or, in the case of Amherst, where the flyers were anonymous, first found out and then punished).

Even to those who are sympathetic to the activists’ other arguments (which largely center on the complicated racial dynamics at play on college campuses, as well as the broader issues highlighted by the Black Lives Matter movement), it’s been a bit strange and unsettling to watch college students demand other college students or administrators be punished for expressing differing political views that, while offensive to some, simply aren’t that far out there.

A new analysis of Pew data offers an interesting, albeit partial, answer — many millennials are openly supportive of the idea of government regulating offensive speech: 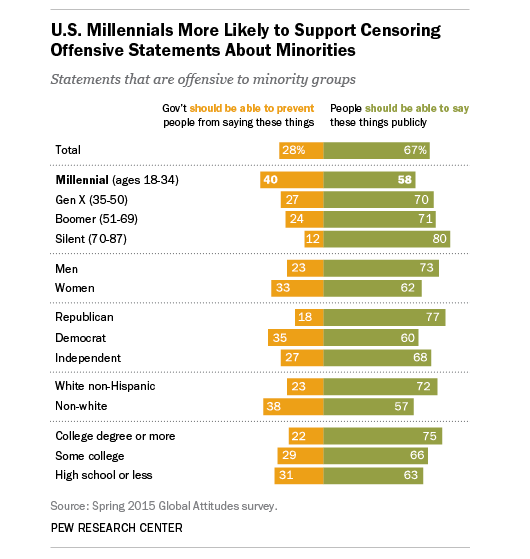 That’s not a majority, but pretty close. And as you can see, there’s a stark divide between millennials and other cohorts here. Pew notes that there’s also “a racial divide on this question, with non-whites more likely (38%) to support government prevention of such speech than non-Hispanic whites (23%).” In addition, Democrats, women, and people with lower levels of education were all more likely to endorse government action against offensive speech (keep in mind that there are all sorts of correlations here, of course — many of the biggest non-white subgroups are much more likely to vote Democratic, for example).

The Myth of the Ever-More-Fragile College Student
Has Tinder Really Sparked a Dating Apocalypse?

But what exactly does 40 percent mean here? Is it a lot? It’s hard to say for two reasons. One is that, as a Pew spokesperson noted in an email, this is the first time the polling firm has asked this question. This makes longitudinal comparisons impossible. It could be the case that there’s something unique about millennials that makes them more open to supporting restrictions on free speech; it could also be the case that young people are always more open to this idea, but naturally age out of it, or that there’s significant bouncing up and down from generation to generation.

It would also be interesting to see what these results would have looked like if the pollsters had chopped off the last two words, and made the question simply about speech that was “offensive” rather than “offensive to minorities.” Survey results are notoriously sensitive to slight changes in question wording, and people don’t necessarily hold coherent ideas about “offensive” speech. Plenty of folks freak out about anti-cop sentiments but are fine with racially loaded language, for example — or insert your own examples. 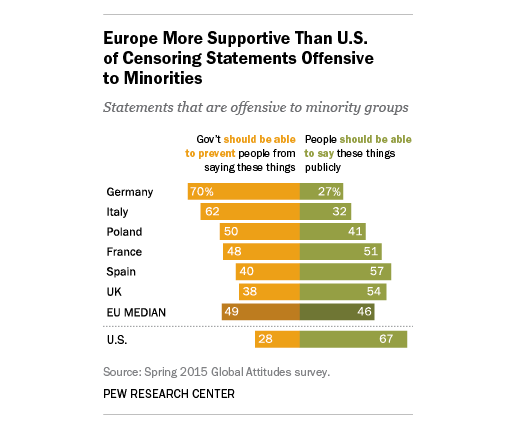 So yes, you can safely say that 40 percent is “a lot” as compared to other age groups in the U.S., but it’s also important to acknowledge the U.S. is an outlier here overall, and still much more supportive of unfettered free speech than other countries. This reflects the fact that the U.S. is arguably a unique place in its approach to free speech as compared to the rest of the developed world — various proscriptions against hate speech, for example, are the norm in both Canada and the European Union, but wouldn’t pass constitutional muster here.

No one survey can “explain” the complicated events happening on college campuses. But it does seem like a significant chunk of millennials, at the moment at least, reject the classical American conception of free speech as applying even (or especially) to the hypothetical Nazis demonstrators marching down the boulevard. This could help account for why it seems like so many college students and older adults are talking past one another.