I understand why people are making fun of International Men’s Day, which is (apparently) today. The gist of anti-IMD arguments is that given the disproportionate sway men hold over the world’s affairs, and how overrepresented they are in basically all of the halls of power, why would anyone possibly dedicate a day to them? Compounding suspicions about this pseudo-holiday, there are a variety of nasty reactionary political movements — most notably men’s-rights activists — who are constantly insisting that it’s men who are being oppressed into oblivion and that those pesky feminists have seized too much power. Such arguments, of course, ignore the fact that when it comes to political expression and countless other measures of power, women really are still getting the raw end of the deal around the world.

So yeah — ridicule is an understandable reaction. But there’s more than a germ of social-scientific truth to the idea of focusing specifically on men and their problems. It’s a simple, sometimes underappreciated fact that when it comes to some terrible outcomes, men really are at a greater risk. We can’t fully address these issues without also addressing gender.

Take suicide. Here’s a chart, based on Centers for Disease Control data, from the American Foundation for Suicide Prevention’s website: 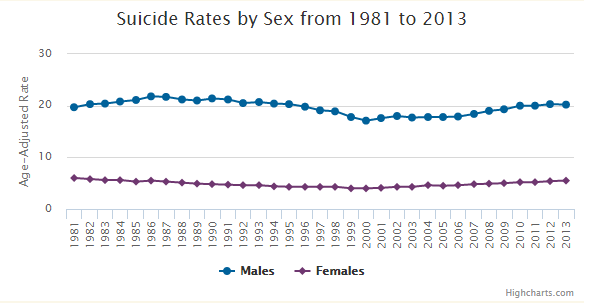 For reasons that aren’t completely understood, men commit suicide at a much higher rate than women — a fact sheet released this year by the CDC notes, “Males take their own lives at nearly four times the rate of females and represent 77.9% of all suicides.” Interestingly, other CDC research notes that, in one study at least, “The prevalence of suicidal thoughts was significantly higher among females than it was among males, but there was no statistically significant difference for suicide planning or suicide attempts.”

Researchers have some theories about the gap in “successfully” carried-out suicides, but are far from solving the puzzle. The point is, though, that whether the reasons are cultural, biological, or — more likely — a combination of both, you can’t really tell a coherent story about suicide prevention without addressing the fact that men are much more at risk.

Or take murder. Every year, the Federal Bureau of Investigation releases its Uniform Crime Report, and every year men are much, much more likely to be the perpetrators or victims of murder. In 2013, for example, the FBI reports that “[o]f the 12,253 murder victims in 2013 for which supplemental data were received, most (77.7 percent) were male.” As for perps, “Of the offenders for whom gender was known, 89.3 percent were male.”

This doesn’t mean murder is solely a masculine problem, but it does mean that it would be useful to understand why men are more likely to kill other people, or to be killed by other people. In much the same way “solving” the gender part of the equation with suicide would greatly mitigate the damage suicide does to society, understanding the connection between masculinity and murder would make everyone safer.

Both the suicide and murder issues — part of the larger trend of men being much more likely to die violent deaths in general — are partly about alcohol, which increases the risk of impulsive behaviors (contrary to popular belief, suicide is often an impulsive act rather than a carefully premeditated one). And guess who, according to the CDC, is hit harder by the harms of alcohol? Again: men. They’re twice as likely to meet the criteria of being alcohol-dependent at some point during their lifespan.

Obviously, for every issue that disproportionately affects men, there are issues that disproportionately affect women. That’s the point! It’s just unfortunate that, in some circles at least, people have let men’s-rights jerks hijack the terms of the conversation. Whatever you think about International Men’s Day, there’s nothing wrong or misogynistic with understanding that certain issues are more likely to affect men than women.