It’s a good day for Emerson Spartz, the young viral-content entrepreneur. The Wall Street Journal reports that Spartz and his Spartz Media company (soon to be renamed Dose Media) have “secured a $25 million strategic investment led by Tribune Media Co. for his viral content sites Dose and OMGFacts.” It’s also probably as good a time as any to point out that when it comes to health and social-science topics, OMG Facts has a really bad, potentially harmful fact problem.

The Journal explains that “Mr. Spartz’s company uses predictive technology to identify content that is likely to become a viral hit and then creates stories based off that info and passes it around social media … [OMG Facts] zeroes in on surprising factoids that also have a high potential to make waves online.” If you look at the site’s homepage, you’ll see a layout of by-now-familiar-looking stories optimized to go viral by dint of their irresistible headlines and (almost entirely) evergreen subjects.

No, Pop Music Isn’t Getting Dumber
Has Tinder Really Sparked a Dating Apocalypse?

There’s nothing wrong with using software to try to get people to click on stories about, say, why basset hounds are great. But when your company has facts in its title and peddles pseudoscience — some of it with the potential to harm your readers — well, that’s bad.

In the lead slot of the homepage right now, for instance, is an article proclaiming that “The Correlation Between Lip Shape And Personality Is Shocking.” It offers up a series of declarative statements like “Heart-shaped lips mean you are creative and romantic,” “Full lips mean you are caring and supportive,” and so on. These claims are all pegged to a field called “Lipsology,” which is promoted by an “entertainer” named Jilly Eddy, whose “self-developed system” has generated these insights. In what may be the least shocking search results of all time, Google Scholar returns no hits for Lipsology and one irrelevant one for Jilly Eddy. “Lip prints” appear to only be referenced as a potential means of identifying people in forensics settings. Jilly Eddy’s work has no scientific footprint because she’s basically a palm reader. There’s no science here — no facts.

If you think I’m being too harsh, check out an article from last week headlined “5 Scientific Reasons That Coconut Oil Will Be The Answer To So Many Of Your Problems” (the basic framework of the content is lifted from Lifehack.com, though the inconspicuous link to the original doesn’t come until the very bottom). Mixed in with harmless-seeming baking and beauty tips is this gem: “The fatty acids in coconut oil can help increase blood supply in the brain and have been especially helpful in reducing symptoms in Alzheimer’s.”

The alternative-health web is littered with claims that coconut oil can help prevent or soften the symptoms of Alzheimer’s — claims that have been helped along by the Christian Broadcasting Network’s interest in the subject — but as the U.K. Alzheimer’s Society notes, there’s zero rigorous scientific evidence to suggest this is the case, and even some (theoretical) evidence that “coconut oil could be detrimental” to people with the condition. The coconut-oil craze has gotten big enough that Snopes did an article on it highlighting the lack of evidence. There is one clinical trial in the works to “determine the efficacy of coconut oil as a possible treatment for older adults with mild to moderate Alzheimer’s disease,” but a small clinical trial with as-yet-unreleased results does not in any sense constitute “evidence.”

Perhaps the most astounding example of the site’s health advice can be found in the article “Who Needs Whitening Strips? Go All-Natural With These 8 Fresh Teeth Whitening Solutions.” Here’s one of them: 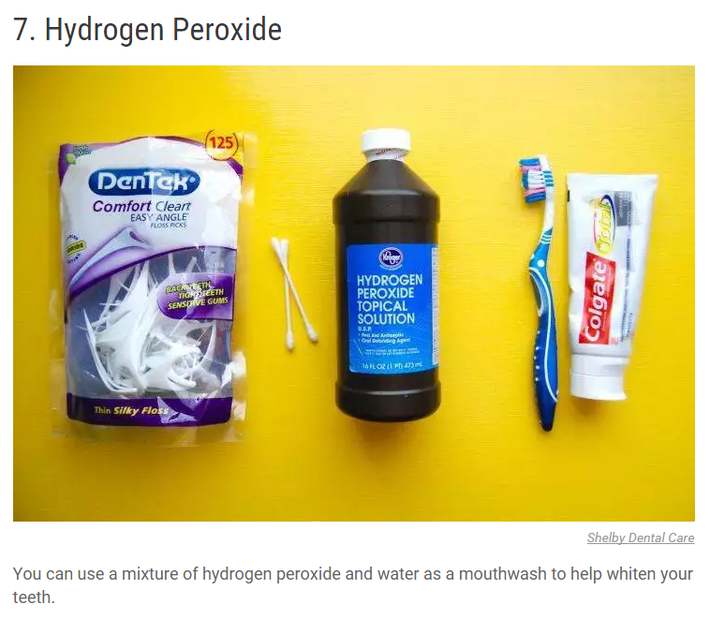 In typical OMG Facts fashion, the source material is barely nodded to, and the image stolen from that source. But click through to Shelby Dental Care, and you’ll see a page with the headline “Ask The Doctors: Could It Be Safe to Swish with Hydrogen Peroxide to Whiten Teeth?” Among the five doctors polled, there’s a clear consensus [sic throughout]:

Answer 1: NO! Please don’t swish to whiten you teeth. Teeth Bleaching representatives say they’ve hydrogen peroxide included, but it’s somewhat of a delivery system that is different. Teeth will clean you mouth although not whiten you. Additionally, please don’t use Bleach to get this done either. I’ve experienced it before as you can imagine, which is quite dangerous. Teeth bleaching in the dentist office is not somewhat expensive these days compared to what it was once. Generally between $150-300. You will get an effect that is great with take home bleaching also it normally takes about 10-14 days. Please talk about this and you’ll be happy with all the results to your own personal dentist!

Answer 2: You should never rinse with hydrogen peroxide to bleach your teeth! This may not only not whiten your teeth, but you can do critical damage to your own gums and lining of your mouth. You can also interrupt the normal flora of bacteria in the mouth area. In case you would like to whiten please see your dentist for choices.

Answer 3: Definitely not! Hydrogen peroxide out of the bottle is not in whitening teeth only ineffective, but might damage your gums as well as the lining of your mouth. Whitening products which contain hydrogen peroxide are specially formulated so as to not cause harm. Ask.

Answer 4: I possess some patients that swish as a part of the hygiene program with 3% hydrogen peroxide. The teeth can whiten over time but might take months to notice a difference. In the event you are about whitening your teeth serious choose what is the top method for you and talk with your dentist. Professional teeth whitening is still the greatest most foreseeable approach to bright white smile.

Answer 5: There are a couple things to think about. Although one of the techniques of bleaching teeth entails the utilization of concentrated hydrogen peroxide particularly formulated for dentists to use in the “in-office bleaching technique“, the effectiveness of using over the counter hydrogen peroxide as a mouth rinse to bleach your teeth is very unsuccessful.

So, to recap: OMG Facts found a page with dental information, exactly reversed the message of that information, stole the image, and posted this advice in its “health” section. (The American Dental Association “recommends that if you choose to use a bleaching product, you should only do so after consultation with a dentist.”)

This level of carelessness isn’t surprising when you dig deeper into the site. On this article about “15 Home Remedies That Include Items You Already Have At Home,” for example, the author suggests you “Apply Vicks VapoRub to get rid of toenail fungus.” The source is this blog post in which the author was given an iPad and product samples in exchange for blogging about VapoRub — it’s an advertisement, in other words.

I could go on. The point here isn’t to be a curmudgeon; for one thing, post all of the basset hound content you want! For another, I understand that the young people assembling all of this stuff are under significant pressure to churn out content and have neither the time, nor in many cases the expertise or reporting experience, to look into the claims they’re amplifying in the hopes of a page-view payout.

But when we lump health and science content in with basset hounds under an overly broad conception of “clickbait” and exempt it from normal editorial standards as a result, we ignore the fact that such misinformation can have very real-world effects. People are notoriously terrible at discerning reliable sources of health and science information from unreliable ones. Referring to pseudoscience, confused “curation”of other people’s content, and advertising as “facts” doesn’t help matters, and the company’s highly touted viral expertise only increases the odds that vulnerable people will come upon this nonsense and treat it as reality.

If you want an intimate tour of Spartz’s content-sausage factory, The New Yorker did a very interesting profile of him a year ago.

OMG Facts Has a Facts Problem

fashion 10:08 a.m.
What to Know About the Balenciaga Ad Scandal The fashion house is under fire for two separate campaigns that consumers say promote child exploitation.
dream date 8:00 a.m.
Bilal Baig Steps Into Their Comfort Zone Sort Of’s star and co-creator finds their sweet spot.
gone sale-ing Yesterday at 6:24 p.m.
What You Need From Net-a-Porter’s Holiday Sale According to the Cut Shop editors.
black friday Yesterday at 3:00 p.m.
24 Best Cyber Monday Fashion Deals From Everlane, Nordstrom, Saks, and more.
celebrity Yesterday at 1:00 p.m.
Is Minka Kelly Dating the Imagine Dragons Guy? She and Dan Reynolds went out for dinner for … five hours?
chaos Yesterday at 12:16 p.m.
Elon Musk’s Bedside Table Is Even More Terrifying Than You’d Expect Which is more concerning: the multiple guns or the cans of caffeine-free Coke?
brooding Yesterday at 12:00 p.m.
Are There Any Kids’ Books Out There That Are … Actually Good? Wizards and dragons need not apply.
By Kathryn Jezer-Morton
gone sale-ing Yesterday at 10:13 a.m.
33 Amazon Gift Ideas That Are Also On Sale For Cyber Monday Kill two bird with one stone.
celebrity Yesterday at 9:40 a.m.
Pete Davidson and Emily Ratajkowski Hit a New Relationship Milestone They appeared very happy to be together at Sunday night’s Knicks game.
gone sale-ing Yesterday at 9:04 a.m.
21 Cyber Monday Lifestyle Deals to Make Your Humble Abode a Little Less Humble It’s all in the details.
gone sale-ing Yesterday at 8:06 a.m.
The 29 Best Cyber Monday Beauty Deals Tatcha, Sephora, and Nordstrom are already offering some great discounts.
how i get it done Yesterday at 7:01 a.m.
Aurora James Is Too Busy For This Interview The Brother Vellies designer talks 80-hour workweeks, supporting Black entrepreneurs, and wearing Issey Miyake to the gym.
astrology Nov. 27, 2022
Madame Clairevoyant: Horoscopes for the Week of November 28 Jupiter retrograde is ending, so you can put the rose-colored glasses back on.
By Claire Comstock-Gay
sex diaries Nov. 27, 2022
The Divorced Lawyer Who Loves Getting Ready for Dates This week’s sex diary.
snacks Nov. 25, 2022
I Can’t Shut Up About Spam Figgy Pudding It’s so wrong, and yet so right.
culture Nov. 25, 2022
Rebranding Midlife Celebrities like Naomi Watts, Stacy London, and Judy Greer are determined to make a business out of menopause.
5 questions with... Nov. 25, 2022
For Quentin Plair, Stripping Wasn’t Always on the Menu But the Welcome to Chippendales star’s confidence was renewed after playing an exotic dancer on TV.
5 questions with... Nov. 25, 2022
How Amanda Gorman Fostered Her Confidence It didn’t always come naturally, but the poet built it with affirmations from her mom and using her imagery as activism.
¡hola papi! Nov. 25, 2022
‘I Lost My Creative Spark’ Don’t think about the book you haven’t written or the drawing you haven’t sketched out. Think about what role you want art to play in your daily life.
By J.P. Brammer
star material Nov. 24, 2022
A Handy Guide to Astrology’s Black Moon Lilith Lots of mystery and intrigue with this one.
More Stories