Yasmina Alaoui and Marco Guerra made the dining table from planks that they rested on two camera cases. Photo: Costas Picadas/New York Magazine

“We had 175 bags of garbage to remove before we could even start fixing up the place,” artist Yasmina Alaoui says of the fourth-floor Bowery loft she rents with her husband, photographer Marco Guerra. Before the couple and their son arrived in 2013, a tenant had lived in the building for 50 years and used it to host experimental theater performances. “When we moved in,” Alaoui says, “there was no kitchen, barely any bathrooms, blue floors, and purple-and-orange ceilings and walls.”

Those walls came tumbling down, and all the surfaces of the 3,000-square-foot space were whitewashed, bringing light into what now serves as a home and studio. As for the decision to renovate a rental, Alaoui explains, “We got a three-year lease and a slight discount on the rent. We couldn’t find anything suited to our taste, so we didn’t mind the investment. We also wanted to experiment with building. And having what we want is priceless.”

Alaoui, who was born in New York and raised in Paris and Marrakech, says that it was the Moroccan city that really left its mark on her: “It was enchanting, fun, and eccentric,” she recalls, citing her parents’ group of fashionable friends, among them designers Yves Saint Laurent and Fernando Sanchez, whose futons and pillows, which once decorated his apartment in the Osborne here in New York, now hold center court in the loft. “Everything about Fernando was so deep with history,” Alaoui says. “His objects inspire us. Fernando’s home and lifestyle were a great point of reference of how to live a fun, worldly, and generous life.”

*This article appears in the November 30, 2015 issue of New York Magazine.

The Living and Dining Area

Yasmina Alaoui and Marco Guerra made the dining table from planks that they rested on two camera cases. The red-on-black painting is by Alaoui, while Guerra’s photographs grace the opposite wall.

The table is piled with “work and trinkets,” Alaoui says, including paint jars, photographs, and a Moroccan bowl.

A skateboard, tricycle, and basket of toys hang from the ceiling of their son’s room, which, along with the bathroom, is the only enclosed space in the loft.

Guerra gave Alaoui this Picasso print instead of a diamond ring when he proposed to her in Paris.

The custom-made white linen futons and pillows once belonged to the late fashion designer Fernando Sanchez.

Their bed is tucked behind the working studio space. Guerra made the hanging coral sculpture by the armoire, and every guest who spots it wants one.

View Toward Kitchen and Bathroom

The couple left the original architectural details intact, including the columns and the tin ceiling. Their son’s small Ikea table and chairs are in the foreground. 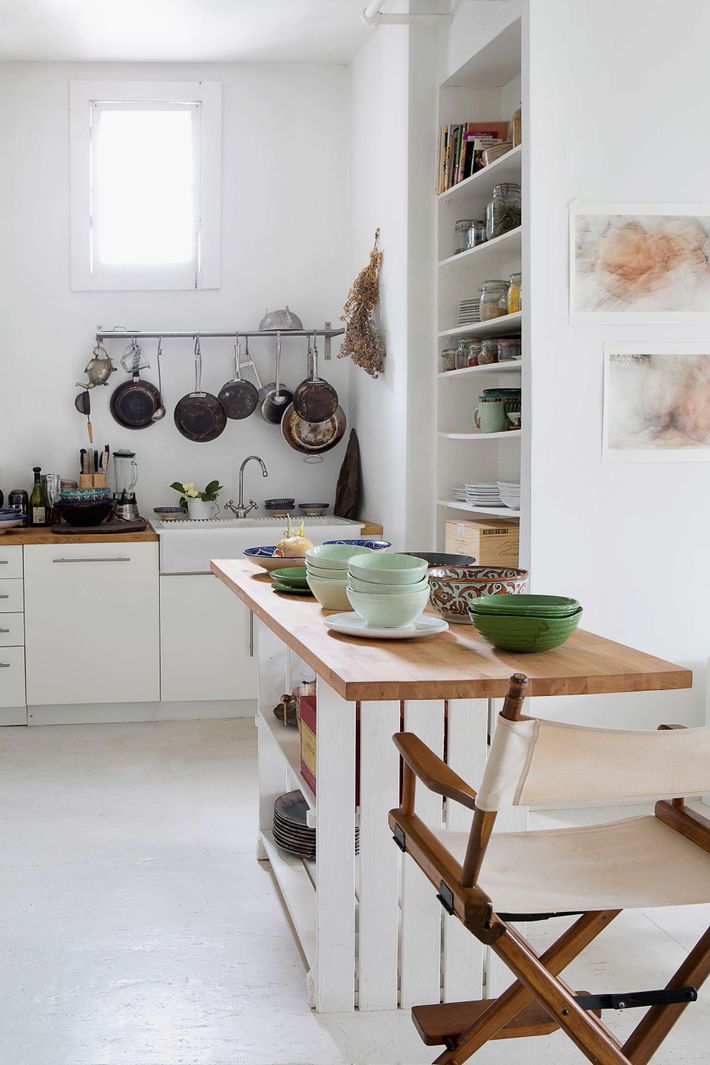 “We redid the floors, fixed all the walls, painted everything white, added a brand-new bathroom and kitchen, and started cooking immediately to bring back life into the space,” Alaoui says.

How This Theater Turned Into an Airy Family Home

the body politic 2 mins ago
The Abortion Stories We Didn’t Tell How decades of silence left us unprepared for the post-Roe fight.
By Rebecca Traister
pride 2:00 p.m.
‘I’m Trying to Focus on the Joy’ Celebrating 20 years of Pride in St. Petersburg amid Florida’s anti-LGBTQ+ crusade.
By Ashley Dye
that's hot 1:19 p.m.
Paris Hilton Has Her Priorities Straight No president is more important than Britney, bitch.
trendspotting 1:00 p.m.
The Wedding Trend That’s Too Cool to Care All That Much The too-chill-for-tradition aesthetic.
By Laura Pitcher
power 12:40 p.m.
Ketanji Brown Jackson Is Officially a Supreme Court Justice She was sworn in on Thursday, becoming the first Black woman to ever serve on the bench.
crime 12:10 p.m.
A Mother Pushing a Stroller Was Shot and Killed in Manhattan Investigators say a 20-year-old woman was shot at “very close range” while on the Upper East Side Wednesday night.
life after roe 12:00 p.m.
What Makes People Change Their Minds About Abortion? Pro-choice evolutions can take years, a timeline that feels painfully slow in this post-Roe moment.
life after roe 11:40 a.m.
The Uphill Battle to Codify Roe v. Wade President Biden has called on Congress to make an exception to the filibuster rule so it can reinstate federal abortion protections.
my two cents 8:00 a.m.
How to Find a Financial Adviser And how to know if you really need one.
By Charlotte Cowles
life after roe Yesterday at 5:30 p.m.
Some Hospitals Have Already Stopped Providing Plan B A health system in Missouri says it has stopped providing emergency contraception until the state’s abortion ban is “better defined.”
don't call it a comeback Yesterday at 5:14 p.m.
Cameron Diaz Is Coming Out of Retirement With a little help from Tom Brady.
crime Yesterday at 3:23 p.m.
R. Kelly Has Been Sentenced to 30 Years in Prison “The public has to be protected from behaviors like this,” a judge told the singer.
in sickness and in health Yesterday at 2:40 p.m.
Travis Barker Has Been Hospitalized He’s reportedly being treated for pancreatitis after a recent colonoscopy.
celebrity Yesterday at 2:14 p.m.
Lauren Conrad Reveals She Had an Ectopic Pregnancy “I wanted to share my own experience with lifesaving reproductive care.”
abortion Yesterday at 1:25 p.m.
Meghan Markle Calls On Men to Be Vocal About the End of Roe In a new conversation with Vogue, she spoke about the devastating impact of the SCOTUS ruling.
shopping Yesterday at 1:17 p.m.
What to Expect From the Nordstrom Anniversary Sale Deals incoming.
skin kare Yesterday at 1:08 p.m.
Kim Kardashian Is Being Sued Over SKKN A Black-owned beauty brand filed a suit alleging copyright infringement.
wedding etiquette Yesterday at 1:00 p.m.
The Bride and Groom Formally Request That You Dress Up The tyranny of wedding dress codes.
By Kayleen Schaefer
are u coming? Yesterday at 1:00 p.m.
You’re a Star on thecobrasnake.com! “It feels like 2007 again.”
By Brock Colyar
rtw fall 2022 Yesterday at 12:54 p.m.
Liberated From the Fashion Grind, Marc Jacobs Finds a New Tension On Monday night, Jacobs showed a collection deeply in touch with the digital world.
By Cathy Horyn
More Stories