A little more than a month ago, a study in the Proceedings of the National Academies of Science arrived with a shocking message: Middle-aged white Americans, unlike just about every other subgroup in the wealthy world, had seen their mortality rates increase between 1999 and 2013. The study, by the husband-and-wife team of Princeton economists Anne Case and Angus Deaton, generated a great deal of publicity and speculation as to the root causes of what Case and Deaton described as deaths “largely accounted for by increasing death rates from drug and alcohol poisonings, suicide, and chronic liver diseases and cirrhosis.”

After the paper was published, Columbia statistician Andrew Gelman critiqued the authors’ methodology, launching a mini-controversy. Case and Deaton, he argued, should have “age adjusted” their numbers, meaning they should have accounted for the fact that between 1999 and 2013 the composition of white people ages 45 to 54 in the U.S. itself got a bit older (that is, an increasing proportion of people 50 and older as time went on, for example), which could itself account for the increasing mortality rates. Case and Deaton also appear to have slightly glossed over some important gender differences present in the data. With the proper tweaking in place, Gelman explained, the story is a bit more complicated.

Now he and Jonathan Auerbach, a political scientist also at Columbia, have submitted a letter to PNAS laying out their findings, and Gelman has posted an unabridged (it still isn’t long) version to his website. It’s a nice summary of what’s going on here. The key finding is that once age adjustment and gender differences are taken into account, it appears to be the case that “The mortality rate among white non-Hispanic American women increased from 1999–2013. Among the corresponding group of men, however, the mortality rate increase from 1999–2005 is nearly reversed during 2005–2013.” So over that entire period, things have progressively gotten worse for women and stayed flat (after an increase and a decrease) for men. In both cases, it’s bad news, and at no point has Gelman debated the basic line that this is troubling data that needs further investigation and explanation.

Their letter also includes a couple of nice graphs breaking things down by region, capturing some serious health disparities between different parts of the country: 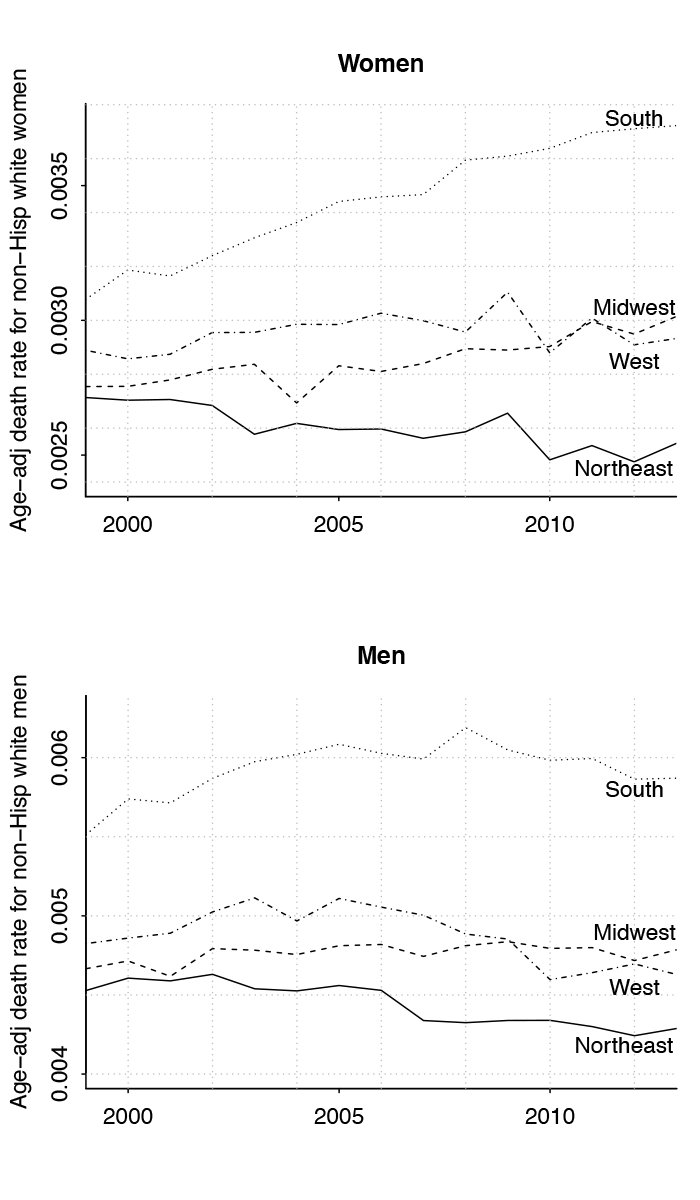 “The most notable pattern,” the authors write in the caption, “has been an increase in death rates among women in the south. In contrast, death rates for both sexes have been declining in the northeast.” This wouldn’t be the first time researchers have observed these sorts of differences, though Gelman declined to speculate about the specifics in this case. There’s a lot to unpack in Case and Deaton’s sad findings, and researchers are going to be sorting through them for a long time.

White Mortality, Broken Down by Region

documentaries 16 mins ago
‘For So Long, I Had Larry in My Ear’ In an exclusive clip from Hulu’s Stolen Youth docuseries, Larry Ray survivor Felicia Rosario opens up about the impact of his gaslighting.
keeping up with the royals 12:37 p.m.
Could the Spice Girls Get Harry to the Coronation? Sources are saying the palace is “super keen” to get “Britain’s biggest girl band” involved.
tyre nichols 12:24 p.m.
A Sixth Officer Has Been Suspended After Tyre Nichols’s Death: Updates The officer was relieved of duty the same day the five officers charged with murder were fired for the beating.
sparking joy 11:00 a.m.
Marie Kondo Has ‘Kind of Given Up’ on Being Neat Validation for messy homes everywhere.
transgender rights 10:59 a.m.
Utah Bans Gender-Affirming Care for Trans Youth Already this year, Republican lawmakers have proposed more than 150 bills limiting the rights of trans people.
spring fashion 8:00 a.m.
The Promise of Pyer Moss Kerby Jean-Raymond was one of fashion’s most celebrated young designers. Then what happened?
By Tahirah Hairston
spring fashion 8:00 a.m.
It’s Glo Time Grammy nominee GloRilla is figuring out how to be famous while staying F-R-E-E.
By Tirhakah Love
spring fashion 8:00 a.m.
The Hustle of Women in Hip-Hop Editor-in-chief Lindsay Peoples on launching the celebration of 50 years of women in hip-hop who’ve changed the game.
By Lindsay Peoples
how i get it done 7:00 a.m.
How Political Commentator Molly Jong-Fast Gets It Done “We’re a pretty sedentary bunch, but we do a lot of dog-walking. Also, I try to visit my mom once or twice a week depending on how guilty I feel.”
sex diaries Yesterday at 8:00 p.m.
The Creative Director Getting a Little Tired of Feeld This week’s sex diary.
snl Yesterday at 3:48 p.m.
Michael B. Jordan Is a Different Kind of Jake From State Farm See him rock the red polo and khakis on SNL.
celebrity couples Yesterday at 12:28 p.m.
This Good Morning America Romance Keeps Getting Messier Amy Robach and T.J. Holmes are out at ABC.
astrology Yesterday at 8:30 a.m.
Madame Clairevoyant: Horoscopes for the Week of January 30 The overarching astrological story right now is one of growth, action, and following through on intentions.
By Claire Comstock-Gay
spring fashion Jan. 27, 2023
12 Ways of Looking at André Leon Talley The friendships and love stories found inside his estate auction, as told by Anna Wintour, Marc Jacobs, and Tom Ford, and more.
By Cathy Horyn
wait what is happening on tiktok? Jan. 27, 2023
Everything We Know About TikTok’s Lashgate Drama Did Mikayla Nogueira add false lashes or not?
parties! Jan. 27, 2023
Teyana Taylor, Anna Camp, and More of the Bestest Party Pics This Week Parties with Gucci, Sundance, and more.
gone sale-ing Jan. 27, 2023
10 Things You Don’t Have to Pay Full Price for This Week Deals from Dyson, Nordstrom, Shopbop, and more.
friday sales Jan. 27, 2023
19 Things on Sale You’ll Actually Want to Buy: From Lunya to Areaware Including fuzzy Birkenstock clogs, a teensy Cricut heat press, and our favorite weekender bag from Patagonia.
recommendations Jan. 27, 2023
20 Best Butt Plugs You Can Buy Online According to experts.
q&a Jan. 27, 2023
Saint Omer’s Guslagie Malanda Is No Longer an Actress in Secret How the Saint Omer actress went from art curator to awards-season hopeful.
More Stories