Today is Leap Day, but it’s also the last day of Black History Month. Despite #OscarsSoWhite, the Flint water crisis, and plenty of other moments of injustice, this has actually been one of the best Black History Months we’ve had in a while, with more people openly discussing issues of discrimination and race than ever before. Scroll down to see our favorite moments below — and let’s hope this keeps going for the rest of the year. 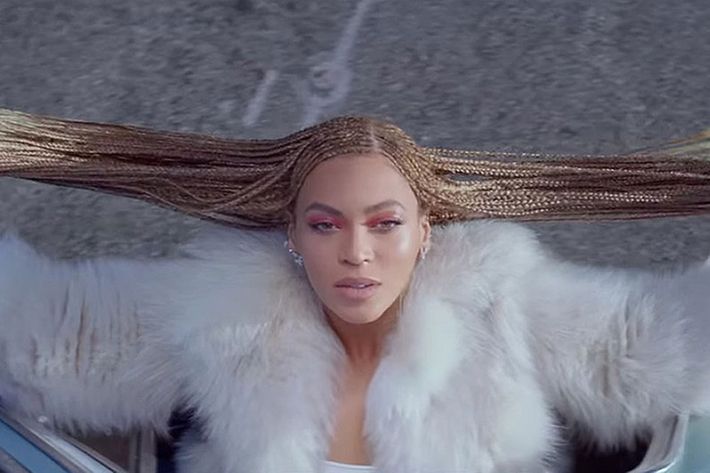 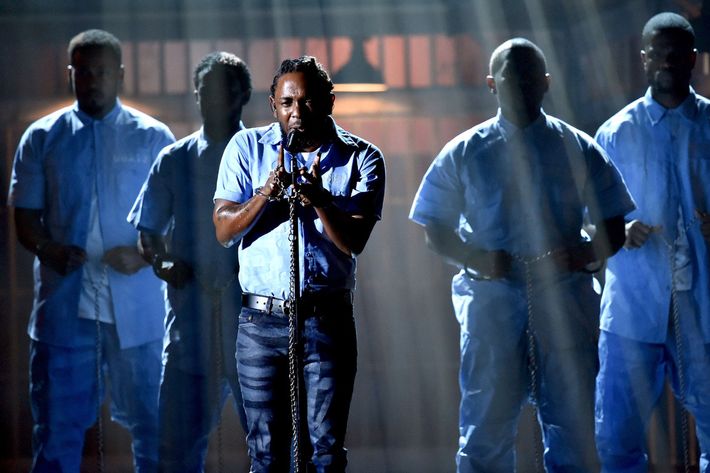 2. Kendrick Lamar at the Grammy Awards

He may not have gone home with the Album of the Year award, but he was definitely the winner of the night with his performance of songs from To Pimp a Butterfly. He refused to dilute his message just because it was the biggest night in music, and that made us love him even more than we already did. 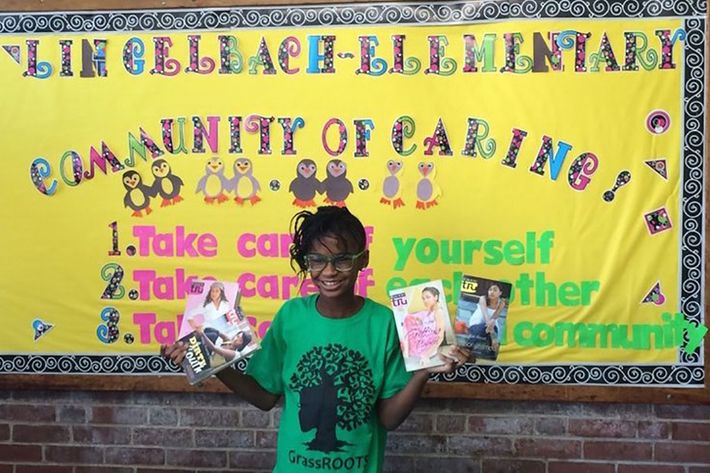 It’s a pretty big deal when an 11-year-old can recognize prejudice at a young age and make a change. Not only is Marley Dias already a grant-winner and Ghanian orphanage volunteer, but the book drive she founded because she was “sick of reading about white boys and dogs” has collected over 3,900 books and counting. 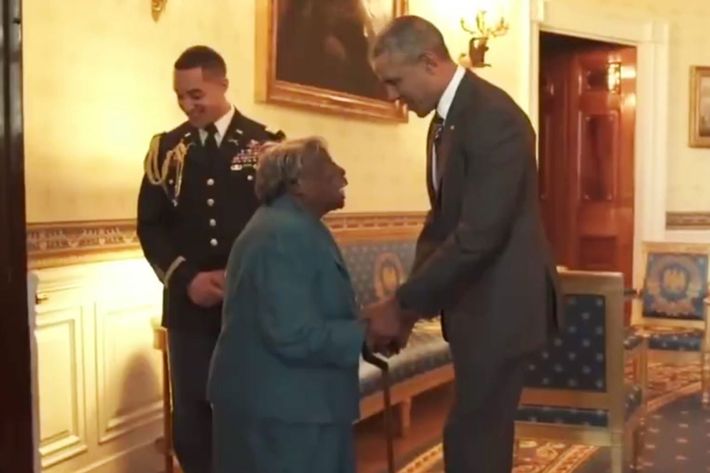 Virgina McLaurin has lived 106 years — long enough to finally meet the Obamas before they leave the White House, and have her own personal dance party with them. 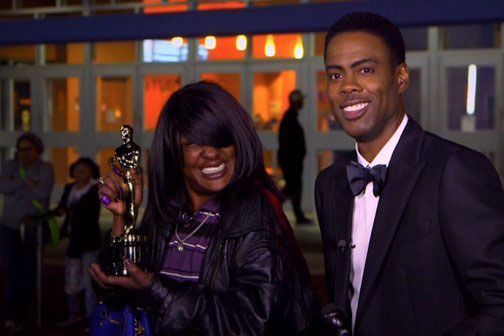 Say what you want about his opening monologue, but it was pretty hilarious to see Chris Rock ask people at the Empire Theater in Compton about all the films that were nominated this year, and watch them respond by saying he was just making up names. Bonus points for them raving about Straight Outta Compton and accepting an Oscar statue asking Hollywood for more diversity.

Ryan Coogler, Ava DuVernay, Janelle Monae, and a long list of celebrities decided to forego the Oscars last night and host the #JusticeForFlint charity concert instead. The powerful event featured testimonies from families who lost children, loved ones, and their livelihood because of the dire state of the water in Flint, Michigan.

There have been 15 American Girl dolls created in the last 30 years, and for quite some time the only black doll was Addy. But come August, the company will debut the latest historical BeForever doll, Melody Ellison, a 9-year old Detroit girl growing up in the 1960s at the height of the Civil Rights Movement.

Seeing Debbie Allen teach young girls African dance and ballet is a once-in-a-lifetime opportunity — but it’s on a completely different level when FLOTUS invites you to learn those dances on the floor of the White House. The girls learned routines in just a few hours, and needless to say they slayed. 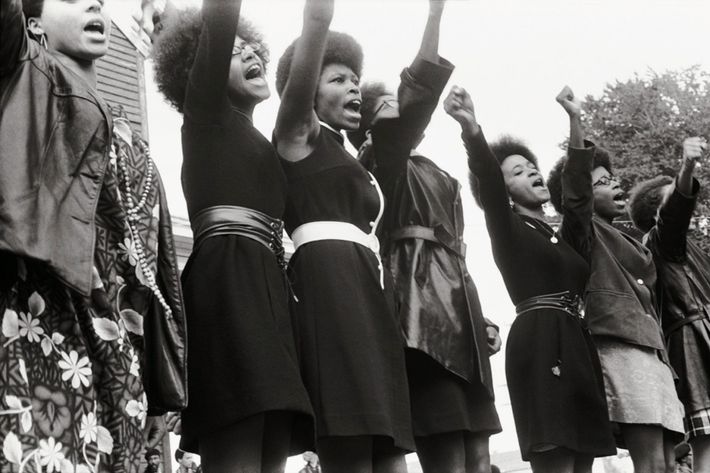 PBS’s documentary The Black Panthers: Vanguard of the Revolution explored the rise and fall of the Black Panthers and their significance in American culture, offering an eye-opening look at black history and the injustices of the ‘60s.

10. Karly Loyce and Lineisy Montero Feliz on the Runway

Runways still aren’t very diverse, but that doesn’t take away the joy it brings to see Karly and Lineisy (who made their respective debuts only last year) walking in major shows like Prada and Salvatore Ferragamo with their natural hair.

MHP walked off the show, saying she felt that she no longer had editorial control. (Among the issues: She wanted to discuss “Formation,” saying that it was “like my Hamilton,” instead of politics.) Her statement — “I am not a token, mammy, or little brown bobble head” — was dead on.

Erykah Badu styled the Pyer Moss fall 2016 collection by designer Kerby Jean-Raymond, offering a meditation on mental illness. The closing model carried a sign that read, “My demons won today. I’m sorry,” which were the dying words of Black Lives Matter activist Marshawn McCarrel, who tragically killed himself that week.

Taraji P. Henson and Octavia Spencer recently signed on to star in Hidden Figures, a historical drama about a group of female African-American mathematicians behind many of America’s first missions to space. The cherry on top: The movie will be premiering on Martin Luther King Jr. Day next year.

Queen of Thursday Nights and best-selling author of Year of Yes Shonda Rhimes had plenty of wisdom to share about her successes and failures and the transformation that has changed her life. During her talk, she said, “For me, my work is at all times, building a nation out of thin air, it is manning the troops, it is painting a canvas, it is hitting every high note, it is running a marathon, it is being Beyoncé. It is all of those things at the same time.” We are all just striving to be Beyoncé, aren’t we?

During the past few years there have been countless cases like Jordan Davis, Trayvon Martin, and Mike Brown — and the conversation about injustice in the world is one black families have become all too familiar with. Andre Johnson (played by Anthony Anderson) perfectly balances the task of giving his kids hope while letting them know the tragedies of the real world in a scene that brought pretty much every viewer to tears.

It’s 2016 and we finally have a black woman running a major network! Channing Dungey is the first woman of color to ever be promoted to such a position and we couldn’t be happier for her. Here’s to more news like this in 2017.

catching up 7 mins ago
So … What Happened on Sex and the City Again? A cheat sheet to where we left off and where And Just Like That … picks up.
5 questions with... 4:39 p.m.
Chatting With WNBA Player Dearica Hamby, the New Face of Jordan On why she sometimes needs to just go into a room by herself and close the door.
health 4:35 p.m.
The Pandemic Has Spiked Our Blood Pressure And the effects of stress could impact our health for years to come.
cover story podcast 4:27 p.m.
That’s an Old Story On this week’s episode, Lily visits the Ecuadoran Amazon to work on a project, and a shaman does something terrible to her.
By the Cut
now open 4:06 p.m.
A New Online Marketplace That Sells Savoir Fare Old Stone Trade, created by the stylist Melissa Ventosa Martin, offers the hard to find.
hot shot 2:40 p.m.
Has Lana Del Rey Entered a New Style Era? Goodbye Maxxinsita period and hello Shein era.
store openings 2:25 p.m.
7 New Stores to Shop at All Holiday Season Mara Hoffman, Parade, and more new stores in New York City.
health 1:53 p.m.
Everything to Know About Rapid Covid Tests At-home tests are (hopefully) about to become a lot more commonplace. Here’s how to use them most effectively.
nightmares 1:20 p.m.
Imagine Sexting Your Dad by Accident Sunday night’s episode of Succession gave us one of the most heinous moments yet.
power 1:17 p.m.
Evan Rachel Wood Says Marilyn Manson Threatened to Harm Her Son In court documents, she claims he also threatened the families of women who came forward with allegations against him.
horny police 12:43 p.m.
Would You Let These Clowns Take Over Your IG? Pete Davidson and Machine Gun Kelly do an underwear ad.
art basel 2021 11:47 a.m.
Judy Chicago Is Tired of The Dinner Party “The girls have their own home now — I’m like, Go and be well.”
By Sangeeta Singh-Kurtz
quiz 10:00 a.m.
What Would Your Selling Sunset Song Sound Like? Figure out your luxury real-estate anthem, you hottie queen boss babes!
#metoo 9:10 a.m.
What We Know About the Disappearance of Peng Shuai After accusing a top Chinese government official of sexual assault, the tennis star’s whereabouts have become the source of international concern.
encounter 8:01 a.m.
At Jamian Juliano-Villani’s New Gallery O’Flaherty’s, ‘Taste Is Out the Door’ The painter and her pals thought the art world had gotten too prissy. “This is the thing. No one’s doing anything cool.”
By Matthew Schneier
advent calendar 2021 8:00 a.m.
Gift of the Day: A Cute, Chunky Claw Clip Give their hair a helping hand.
By Erica Smith
advent calendar 2021 8:00 a.m.
The Cut’s Advent Calendar Gift Guide With a new Cut-approved item every single day.
By the Cut
keeping up with the royals Yesterday at 9:07 p.m.
Prince Harry Is Happy You Quit Your Job The former royal doesn’t think a job should threaten your “mental fitness.”
crime Yesterday at 7:01 p.m.
Everything to Know About Jussie Smollett’s Trial The actor was accused of staging his own hate-crime attack in 2019. Things only got more complicated from there.
pinkie promise Yesterday at 6:25 p.m.
This Love Seems Exhausting Machine Gun Kelly and Megan Fox take the pinkie promise to the next level.
More Stories