Supermodels in Yeezy — what could be a more internet-breaking concept for a photo shoot? For CR Girls 2016, a special supplement to CR Fashion Book’s eighth issue, Carine Roitfeld corralled 20 of her favorite models (including Gigi Hadid, shown here giving bad-Sandy realness), all wearing Kanye West’s Yeezy Season 2 wares, for a 48-page portfolio shot by Sante D’Orazio. Also starring in the shoot: Joan Smalls, Lineisy Montero, Lily Donaldson, Bella Hadid, Caroline Vreeland, Irina Shayk, and Roitfeld’s daughter, Julia. The book doesn’t hit newsstands until February 26, but in honor of the Yeezy Season 3 show looming Thursday, CR exclusively shared a couple of preview images with the Cut (see here for more) and Carine Roitfeld spoke with us about the genesis of the project. 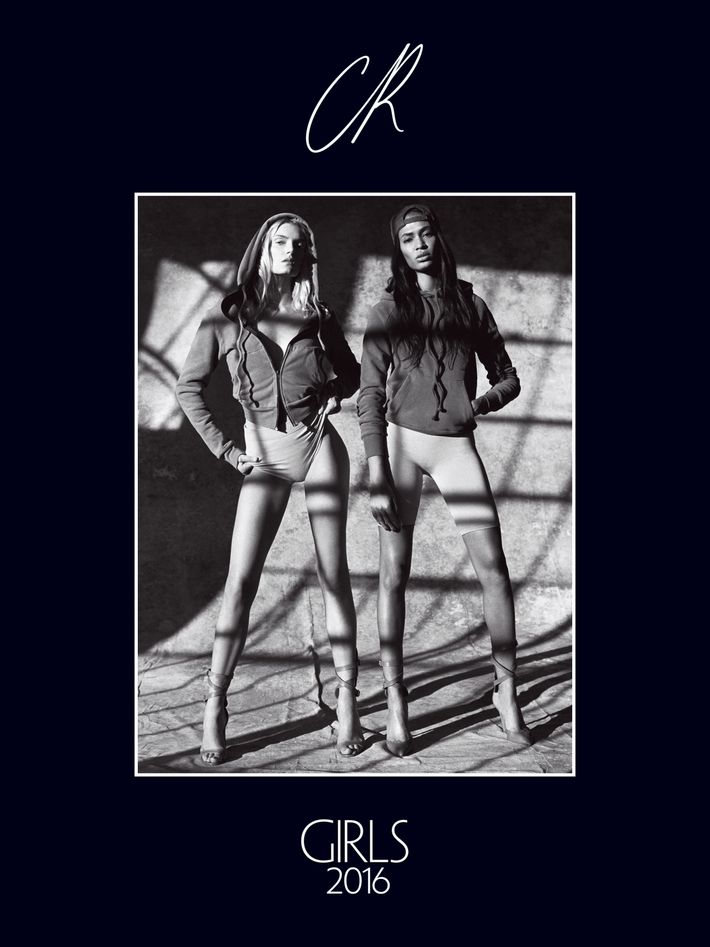 What made you decide to do a shoot based around one designer and to select the Yeezy collection for that shoot?
I really liked his last collection and liked the sportswear inspiration. The main thing I liked in his last show was the diversity with all the different girls and the way they were wearing this collection. I decided to make this shoot very sexy, the way I used to shoot my calendars, like the one I did with Steven Meisel for Pirelli — using oversized clothes and sportswear mixed with high heels by Gianvito Rossi, and reflecting the military mood of Kanye’s show. His show inspired me with the form of the girls, too — they all looked tough but sexy.

What was Kanye’s creative involvement on the project ?
Kanye introduced me to [Instagram-famous Yeezy model] Amina Blue and showed me the casting for his show. He gave me access to his entire collection for my shoot.

How did you decide to cast the models? I know many of these girls, like Gigi, have been longtime favorites of yours.
I like them all! I am very loyal to models I like. From Julia, my daughter and love forever, to my new girl, Amina Blue.

recap 12:29 p.m.
A Bachelor Villain and Her Garlic-Butter Shrimp Shanae takes food fights to the next level.
celebrity 12:07 p.m.
Pop Quiz: Do You Know Who This Man Is? Wheel of Fortune host Pat Sajak recently confessed that he had no idea.
ask a boss 12:00 p.m.
‘I Hate My New Job. Can I Quit Yet?’ Before you make any moves, have a straightforward conversation with your boss.
health 11:00 a.m.
Is the Pain All in My Head? A new treatment called pain-reprocessing therapy promises to cure chronic pain — but maybe not for everyone.
By Eleanor Cummins
celebrity 10:41 a.m.
John Mulaney Has Perfected the Dad Selfie And he posted a picture of Olivia Munn for the first time.
let's makeup 10:35 a.m.
Is Kanye West Doing Makeup Now? He’s partially responsible for at least one of these looks.
By Erica Smith
power Yesterday at 8:53 p.m.
Evan Rachel Wood Says Marilyn Manson ‘Essentially Raped’ Her On Set In her new documentary, she said Manson penetrated her while filming a 2007 music video.
culture Yesterday at 8:41 p.m.
And Just Like That … We’re Being Threatened With a Season Two Sources say those involved are “feeling good” about a possible return.
fashion Yesterday at 7:06 p.m.
Thierry Mugler, Fashion’s Greatest Showman The designer, who died Sunday, was force in ‘80s fashion. A new wave of celebrity fans and a museum retrospective have brought his influence back.
By Matthew Schneier
in memoriam Yesterday at 6:42 p.m.
13 Out of This World Thierry Mugler Looks From inventive silhouettes to theatrical productions, Mugler’s unique approach to glamour will be celebrated forever.
sorry to this man Yesterday at 6:05 p.m.
Doubt Taylor Swift’s Songwriting at Your Own Peril One cannot simply insult her skills.
euphoria Yesterday at 6:04 p.m.
11 Pieces You Can Shop From Euphoria Episode 3 Including Miu Miu, Reformation, Coperni, and By Far.
friendship Yesterday at 5:02 p.m.
Javier Bardem, Please Plan My Birthday Party Commitment is jumping out of a cake dressed as a Bond girl for Daniel Craig.
valentine's day Yesterday at 2:28 p.m.
The 16 New Sweethearts Phrases, Ranked The theme is “words of encouragement.” Gross.
culture Yesterday at 2:17 p.m.
Sometimes Violence Is the Answer All hail Ashtray.
celebrity couples Yesterday at 12:42 p.m.
Kanye West and Julia Fox’s Paris Fashion Week Dress-up Tour Featuring a pair of boots we’ve seen on Kim Kardashian West before.
conspiracies Yesterday at 12:38 p.m.
Why Do TV Characters Keep Having Peloton Heart Attacks? Billions has given us yet another instance of stationary bike-induced cardiac arrest.
self Yesterday at 10:00 a.m.
I Was a Therapist for Sex Offenders When I Realized: I Survived Larry Nassar On the anniversary of Nassar’s sentencing, one survivor reflects on the moment the truth hit her — and all the moments since.
in memoriam Yesterday at 9:41 a.m.
Thierry Mugler Has Died The iconic French fashion designer was 73.
self Yesterday at 8:00 a.m.
‘I May Be Bisexual,’ From Rachel Krantz’s Memoir, Open Writer Rachel Krantz investigates her own sexuality through indulging her partner’s fantasy.
More Stories