Back in November, Charlie Sheen announced live on the Today show that he was HIV-positive, and that the treatment he had received had succeeded to the point where he had an “undetectable viral load” of HIV in his bloodstream.

Naturally, this was a blockbuster news event. The idea of a major celebrity having HIV is no longer as novel as it was before Magic Johnson’s groundbreaking press conference in 1991, but this sort of disclosure is still news — particularly when it involves as big and controversial and troubled a celebrity as Sheen. The former Two and a Half Men star’s announcement generated a flurry of news stories and opinion pieces, many of them focused on the fact that Sheen had paid $10 million to former sex partners to keep them quiet about his status (as the Cut’s Susan Rinkunas noted, you can still transmit the disease to a partner despite having an undetectable viral load — though Sheen claimed to have always told partners about his HIV, and to have used condoms with all but two of them).

Lost in the understandable uproar and salacious details about prostitutes was a potentially more positive, important story: Sheen’s announcement, by focusing news consumers’ attention so sharply on HIV prevention and testing, may end up saving people’s lives.

“Sheen’s disclosure is the most significant domestic HIV-prevention event in the last decade, even though it was unplanned and was not framed as a public-health event,” Dr. John W. Ayers, a computational epidemiologist at San Diego State University, told Science of Us in an email. Ayers is the lead author of a research letter just published by JAMA Internal Medicine that examines the massive online impact of Sheen’s announcement (there isn’t a link available yet, but I’ll insert one once the letter is live).

Ayers and his colleagues used data from the Bloomberg Terminal and Google Trends and AdWords to measure trends in both news stories and internet searches in the days following Sheen’s announcement. Their common-sense finding was that there was a dramatic uptick in news stories and searches containing “HIV.” This isn’t surprising: When a movie and TV star announces he has HIV, people are going to search for this term, and journalists are going to mention it in their stories. 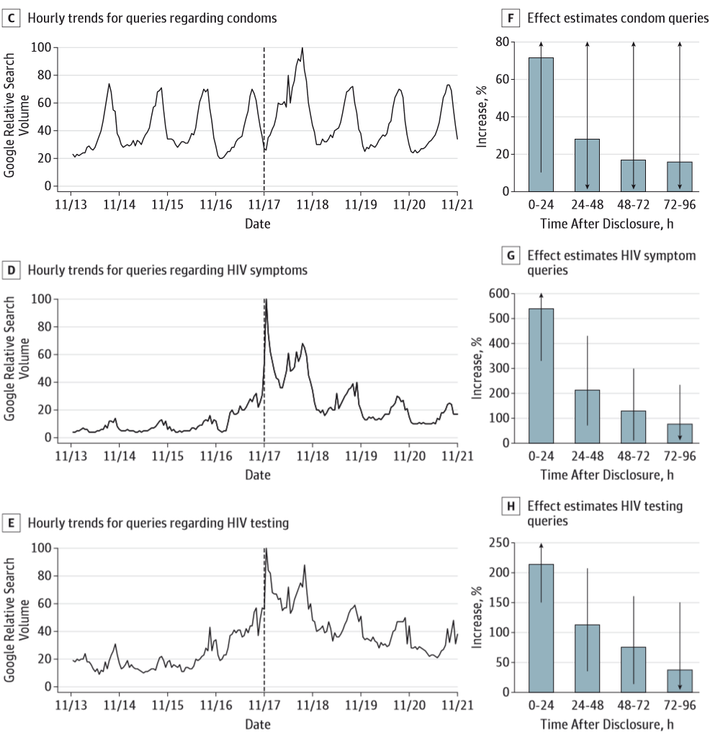 In an email, Ayers put the raw numbers in perspective: “More people than ever before searched Google for topics related to HIV and HIV prevention on the day of Sheen’s disclosure,” he said. “This spike eclipsed the second all-time high by nearly double, with 2.75 million more Google searches about HIV than was expected and 1.25 million more focused on HIV prevention by including terms for HIV testing, HIV symptoms, or condoms.”

The big question, of course, is what percentage of these searches will lead to action — to the querier getting tested or having safer sex. Those are the missing variables here. But given just how dramatic the search spike was, even if only a small percentage of those people got tested or began using condoms consistently, that could fairly easily translate to years of extended life in the form of folks realizing they have HIV and getting it treated, or taking action to prevent themselves from contracting the virus in the first place.

Plus, there’s solid reason, in the form of research on the effects of past celebrity announcements about illnesses, to believe Sheen’s will translate into meaningful action. “For some time scientists and advocates have recognized the importance of celebrity in public health,” said Ayers. “The first study of its kind investigated Katie Couric’s publicized colon-cancer screening, causing some to refer to celebrity public-health effects as the Katie Couric effect. Many studies since (e.g., 1, 2, 3) linked celebrity announcements with public-health outcomes, but none has observed as large of an effect as we see with Sheen, including those using similar metrics.”

In the case of Sheen’s announcement, it’s simply too early to tell what the effects will be, but the magnitude of the search spikes tells a promising story. “Engagement is an important public-health outcome itself,” said Ayers. “Knowing when the population is seeking out public-health resources is critical so that we can match those seeking resources with evidence-based resources. Our study suggests that we need to be thinking about how to harness the Charlie Sheen effect to make sure that all those motivated to think about their HIV risks are encouraged to continue to do so and linked to needed resources.”

All of this serves as a useful exception to the many forms of “awareness-raising” that accomplish very little — as I wrote in 2014, piles of research suggest that many if not most awareness-raising campaigns simply don’t lead to tangible positive outcomes. Even important information has a tendency to bounce off us when presented in a cold, factual way.

Celebrity announcements seem to tap into something more emotional and personal than other forms of awareness-raising, argued Dr. Mark Drezde of Johns Hopkins, a computer scientist who specializes in public-health research and a co-author on the letter, in an email. “This type of awareness event is different from others,” he said. “We know from previous research that when celebrities get an illness or disease, people react by saying, ‘That could be me!’”

So as Ayers argued, it’s up to experts to identify these moments of opportunity and capitalize on them. Potentially, a single moment involving a celebrity could have a greater public-health impact than many less “exciting” public-health campaigns combined.

Charlie Sheen May Have Saved Lives in November

the glow up 20 mins ago
Get Your Glitter Out: Party-Girl Chic Is Back Making the case for Y2K rebellion against “that girl” culture.
lawsuits Yesterday at 6:19 p.m.
Amber Heard Says She Thought Johnny Depp Would Kill Her Depp’s attorney tried to undermine Heard’s credibility during cross-examination.
internet drama Yesterday at 6:14 p.m.
Bobbi Brown vs. a TikTok Influencer It all started with a video of Meredith Duxbury trying the new Jones Road What the Foundation.