The argument that Islam is inherently violent has, unfortunately, gained a lot of traction since 9/11 and in the wake of some of the subsequent atrocities committed by extremists dedicated to radical Islamic causes. In part, the notion has been fueled by consistently dumb media coverage of the subject that strips all sorts of necessary nuance from the question of how religion affects human behavior. What does it even mean to say a religion is violent, or causes it, when that religion has about 1.6 billion members who practice vastly different versions of it in vastly different cultural contexts, the overwhelming majority of whom are peaceful to boot?

It’s a politicized discussion, no doubt. So what if there were a more “objective” way to answer the question of whether Islam promotes violence more, less, or the same as other religions? What if software could answer it for us?

That’s the premise of a series of three blog posts published late last month in which Tom H. C. Anderson of OdinText, a company that does textual analysis, attempted to shed light on this controversy by publishing the results of an analysis of the holy books in question: the Koran and the Bible (with the Old and New Testaments analyzed separately, in some instances).

Well, premise might be a slight overstatement. Anderson simultaneously presents the exercise as having been launched because of the Islam-is-violent claim, but also emphasizes repeatedly that several shakers’ worth of salt should be applied to the results. “Before sharing the first set of results with you here today, due to the sensitive nature of this topic, I feel obliged to reiterate that this analysis represents only a cursory, superficial view of just the texts, themselves,” he writes in the second post. “It is in no way intended to advance any agenda or to conclusively prove anyone’s point.” In the third post, he makes sure to “reemphasize that this analysis is superficial and the findings are by no means intended to be conclusive. Ours is a 30,000-ft, cursory view of three texts: the Koran and the Old and New Testaments, respectively.”

If you want the technical details of how the analysis went down, some of them are in the blog posts. The takeaway is that the exercise allowed OdinText to produce cool graphics like this one …

… and for Anderson to render something of a verdict in his final post:

Those who have not read or are not fairly familiar with the content of all three texts may be surprised to learn that no, the Quran is not really more violent than its Judeo-Christian counterparts.

Overall, the three texts rated similarly in terms of positive and negative sentiment, as well, but from an emotional read, the Quran and the New Testament also appear more similar to one another than either of them is to the significantly “angrier” Old Testament.

Of course, we’ve only scratched the surface here. A deep analysis of unstructured data of this complexity requires contextual knowledge, and, of course, some higher level judgment and interpretation.

An image is affixed to the top of that post communicating some of the more eye-catching results: 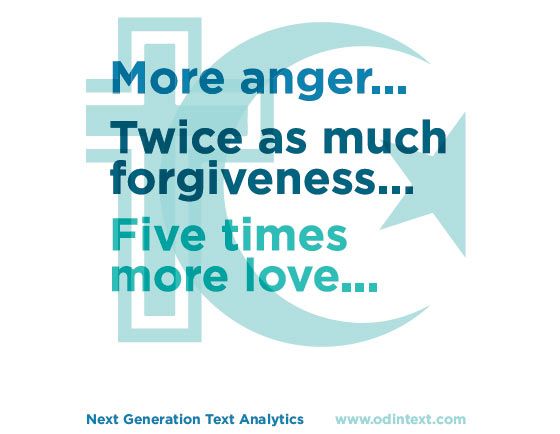 I understand why Anderson and his company would see value in this exercise — and why shouldn’t someone who is an expert at textual analysis, well, analyze important texts? But despite the caveats Anderson littered throughout the piece, it’s inevitable people will use these findings, which have picked up some media coverage, to make whatever point they want to make. That would be a mistake.

The road that leads from the textual content of these holy books to the behavior of human beings in 2016 is long and winding and forks off in a thousand directions. For reasons that are extremely complex or hidden to us entirely, during that journey minor lines have been blown up into dictates of cosmic importance, while entire themes have been relegated to the status of footnotes. Think of a really religious person you know and some rule they find quite important — perhaps one they even organize their life around to a certain point. Then check exactly how much their holy book says about the behavior in question. In many cases, you won’t find all that much.

In other words: There just isn’t a tight, straightforward connection between the quantity of certain sentiments in these books and what people do as a result of them. On a basic level, it doesn’t mean anything, except in the literal sense that software understands meaning, to say the Koran has “five times more love” than the Bible. To think it does is to take the mistake people in the Islam-is-violent camp make — acting like any of this stuff is straightforward or that a quick peek at these texts reveals something meaningful about the behavior of those who believe in them — and then to simply flip it on its head and treat it like a new and important insight.

A Company Analyzed Whether the Koran Is Violent