We know race plays a major role in American politics, but over time that role has gotten trickier and trickier to fully understand. Until fairly recently, it was simple: Politicians could run openly on white-supremacist platforms and engage in openly racist messaging, and voters would reward them for it.

Those days are behind us, for the most part. It’s not that there isn’t plenty of racism in politics — there absolutely is — but, rather, that because open racism has (mostly) been drummed out of polite society, racial appeals these days are coded. When Ronald Reagan gave a 1980 campaign speech about “states’ rights” near the site of an infamous 1964 murder of civil-rights activists, he was able to communicate a racially coded appeal without saying much that, purely on a textual level and out of context, looked like explicit racism.

Does Asking White People for Moral Self-Reflection About Race Actually Work?
Racism Doesn’t Work the Way You Think It Does

This understanding of the ways racial appeals have morphed into symbols and dog whistles has generated a lot of political-science and political-psychology research. Now two political scientists have decided to better understand how voters respond to black candidates who deviate from certain commonly held stereotypes, and they’ve done so in an interesting fashion — by creating fake campaign ads.

Ethan Porter, a Ph.D. candidate of political science at the University of Chicago (full disclosure: we are acquaintances from when we both lived in Washington), and Dr. Thomas J. Wood, of Ohio State University, recently published a paper in Political Communication entitled “Race, Interracial Families, and Political Advertising in the Obama Era: Experimental Evidence.” As they explain, the so-called “new racism” has picked up in the era of Obama:

Even and perhaps especially in the age of U.S. President Barack Obama, complex racial dynamics continue to govern how Americans respond to non-White candidates. Such dynamics were best articulated by those scholars who developed the theory of “New Racism.” New Racism holds that anti-Black hostility does not manifest itself through out-and-out racism, which has become socially unacceptable; instead, those who harbor racial animus justify it by claiming that Blacks do not heed the traditional value of “hard work.” In fact, racially conservative Whites will actually look more favorably upon Blacks described as “hardworking” than Whites described as working the same amount (Sniderman, Piazza, Tetlock, & Kendrick, 1991). New Racism helps explain how racism persists across social institutions despite its taboo status.

Porter and Wood were interested in how this ties into the increasing visibility of mixed-race political couples (Mayor Bill de Blasio’s family is a local example for New Yorkers), given that researchers “have largely overlooked the use of interracial families in political advertising.”

According to prevailing theory, here’s how mixed-race families would tie into the new-racism concept:

A Black candidate who highlights a White son is sending an “implicit racial appeal” about his distance from Blackness and his proximity to Whiteness (Mendelberg, 2001). Mendelberg writes that an implicit racial appeal depends on the absence of explicit reference to race, instead counting on the audience to pick up on the indirect cues that the advertisement communicates. In the ads in this article, the race of the candidate and his son was never made explicit; instead, it was left up to the audience to notice. This was meant to be exactly the kind of subtle cue that can be cognitively accessible to viewers without drawing attention to itself (Valentino, Hutchins, & White, 2002). Sending an implicit racial appeal that differentiates him from racial expectations should benefit the Black candidate.

To test this, they asked Frank Chi (another acquaintance), who works at a real-life political consulting firm and has worked for folks like Elizabeth Warren, to generate some political ads, and then hired a bunch of Amazon Mechanical Turk workers to evaluate those ads over the course of two studies, while also collecting some data about who the participants were. The ads were mixed up to vary certain elements — in the first study, for example, there were four variations on a 30-second campaign ad in which a black or white candidate for county supervisor named “Sean Woods” is endorsed by his black or white son.

Here are shots of what these hypothetical voters saw toward the end of all four ads: 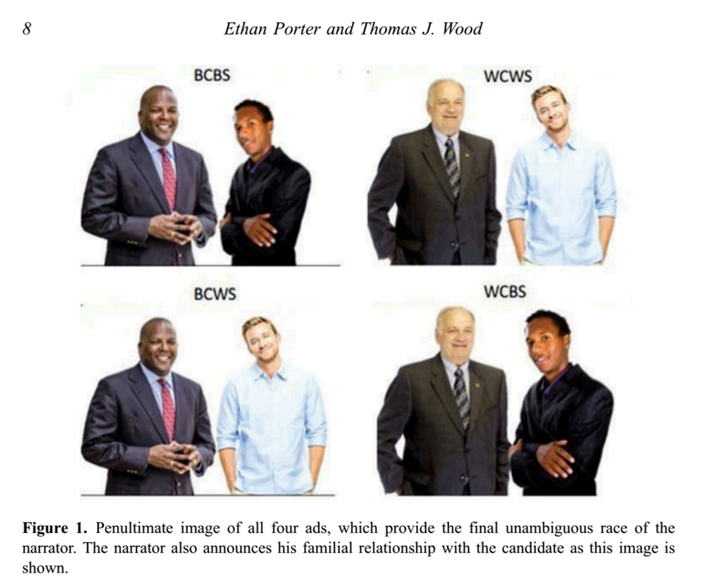 Immediately after the ad, the subjects were asked to rate, on a scale of 0 to 100, the extent to which “candidate” Sean Woods — taking the present tense directly from the paper — “cares about people like them, is qualified for public office, shares their values, and is someone they can trust.

Here are the results — there’s a lot going on here, but you can simply compare different conditions (BCWS means black candidate, white son, and so on) to see which approach resonated the most with Amazon’s hypothetical voters: 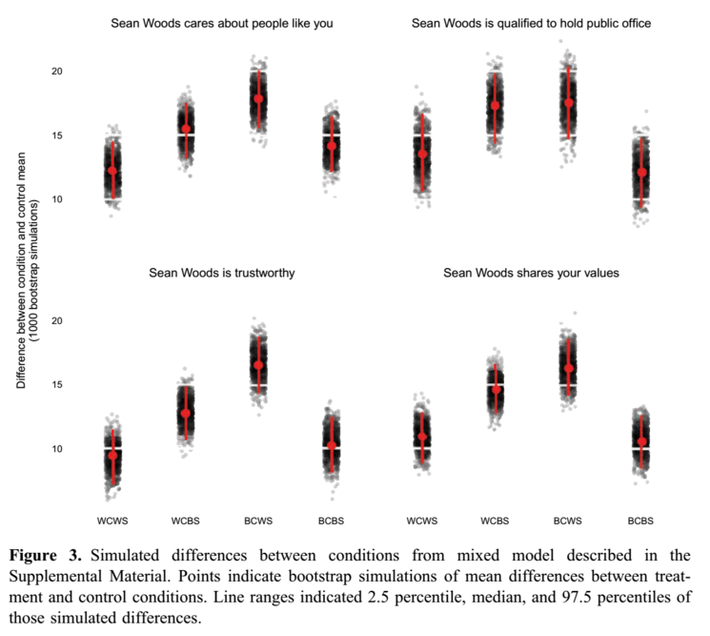 As is clear from the graphic, black candidates with white sons performed the highest among the more than 1,000 participants. Porter and Wood describe the result as “lend[ing] broad support to [hypothesis 1], which predicted that a Black candidate who departed from expectations of racial homogeneity would do better than one who conformed to them. However, the results upend H2, which anticipated that, given the prevalence of anti-Black racism, a White candidate would do best of all. Instead, of all four candidates, a Black candidate was the most well-regarded.”

How do they explain the fact that it was a black candidate who did best? They think it had to do with “racial novelty,” which they define as “behavior related to race that sharply deviates from race-related expectations.” Since voters expected that a black candidate would have a black son, deviating from this expectation “narrow[ed] the perceived distance between him and White voters,” giving him a sizable boost that actually allowed him to overtake white candidates.

In Study 2, they pressed this idea further: This time they created four campaign fliers:

In each of the flyers, the fictitious Sean Woods candidate was Black. These ads manipulated the race of Woods’ son, as well as the youth sport which Woods was said to have coached. The four resulting ads featured Woods: with a Black son, coaching basketball; with a White son, coaching basketball; with a Black son, coaching hockey; and with a White son, coaching hockey. … In line with H1 from Study 1, we anticipated that the Black candidate who displayed a non-Black child would do better than the Black candidate who displayed a Black child. The text that appeared on the flyers was the text of the script used in Study 1.

This hypothesis wasn’t borne out — while the 707 white voters in the study (the only ones whose choices were analyzed this time around) gave black candidates with white sons a bonus, they only gave the black Woods coaching hockey a very slight boost over his basketball-coaching counterpart.

So these are mixed results, overall, and the most interesting thing here is just how much black candidates in the study benefited from having a white son. Summing all this up, the authors write:

After having lived under Obama for almost six years, voters are willing to prefer a Black candidate, conditional on that candidate’s deviation from race-related expectations about family arrangements. … Well into the Obama presidency, voters continue to make sharp distinctions on the basis of race alone, but are affected enough by racial novelty to prefer a Black candidate who exhibits it over White candidates. … [W]e speculate that the decline of overall racial animus under Obama means that voters are willing to lend even more support to the racially novel candidate, but that racial animus toward non-novel candidates still lurks.

One key question in future studies will be exactly which cues most effectively communicate to white voters that a black candidate isn’t too dissimilar from them. But for now — at least based on this study — intimate, personal signifiers seem to go a long way toward building that sort of trust.

How Voters React to Mixed-Race Families

runway beauty Yesterday at 6:07 p.m.
Forget an ‘It’ Bag. How About ‘It’ Ears? Burberry’s hottest runway accessory.
fashion Yesterday at 6:01 p.m.
Fendace: The Wife Swap of the Fashion World Versace and Fendi switched designers in an opulent, supermodel-studded show.
surprise surprise Yesterday at 5:33 p.m.
Guess Who’s Still Extremely Happy and in Love? These two, kissing again.
crime Yesterday at 4:33 p.m.
She Warned Us About R. Kelly. No One Believed Her. Sparkle has been waiting 20 years for this verdict.
By Angelina Chapin
scent memories Yesterday at 4:01 p.m.
For This Skin-Care CEO, Happiness Smells Like Fresh-Cut Grass Deciem co-founder Nicola Kilner shares her favorite scents, from Central Park to her brand’s brick-and-mortar stores.
By Erica Smith
law & order Yesterday at 3:45 p.m.
Treat Stealthing Like the Crime That It Is Already A change to California’s civil code could make the act of agreeing to protected sex and then surreptitiously ditching the condom illegal.
crime Yesterday at 3:36 p.m.
R. Kelly Found Guilty of All Counts in Sex-Trafficking Trial The singer could face life in prison.
crime Yesterday at 3:29 p.m.
The Most Harrowing Testimony From R. Kelly’s Trial The singer has been found guilty of all counts in his racketeering and sex-trafficking trial.
finer things Yesterday at 3:20 p.m.
Gloves That Will Never Go Out of Style Camel gloves to wear with your camel coat this winter.
By Emilia Petrarca
celebrity Yesterday at 3:05 p.m.
Lena Dunham Secretly Got Married She and musician Luis Felber tied the knot over the weekend.
free britney Yesterday at 2:08 p.m.
Wow, Jamie Spears Seems Obsessed With Britney’s Boyfriends The singer’s father reportedly went to great lengths to monitor her dating life, from making her boyfriends sign NDAs to hiring private investigators.
suspicious Yesterday at 12:55 p.m.
Are Angelina Jolie and the Weeknd Really ‘Just Networking’? A new euphemism.
a beautiful life Yesterday at 12:54 p.m.
Marc Jacobs on Beauty and Not Being Nutella “They say that if you please everyone, you’ve done nothing. Then you’re a jar of Nutella.”
mfw spring 2022 Yesterday at 12:24 p.m.
At Milan Fashion Week, Marni Gets Emotional Marni’s creative director, Francesco Risso, showed clothes that moved, in a presentation unlike any other.
By Cathy Horyn
street style Yesterday at 12:04 p.m.
Are New Yorkers ‘Dopamine Dressing’? After a colorful summer, will locals wear less black this fall?
working it out Yesterday at 12:00 p.m.
Code-Switching Has No Place at This Bed-Stuy Spin Studio “Wellness is a place where you should be able to bring your most authentic self because you’re healing.”
the most fertile man Yesterday at 11:54 a.m.
Nick Cannon Says His Therapist Thinks He Should Be Celibate Is his reign as Most Fertile Man coming to an end?!
brace yourself Yesterday at 10:49 a.m.
Bridgerton’s Back, Baby Netflix has dropped its first look at the second season’s main couple.
simple pleasures Yesterday at 10:42 a.m.
I Love How Much Channing Tatum Loves Memes “Broo I laughed and felt this hard!!!”
unreal Yesterday at 10:37 a.m.
The View’s COVID Chaos Continues Last week, two hosts tested positive for COVID mid-show — but it turns out their tests were inaccurate.
More Stories