Members of the Cambridge Anthropological Expedition to the Torres Straits, 1898 (Charles Seligman is second from the left). / Cambridge University Museum of Archaeology and Anthropology

If you were told you’d have to take an intelligence test, what would you expect? Maybe some tests of reading and math, some pattern recognition? Probably not this: 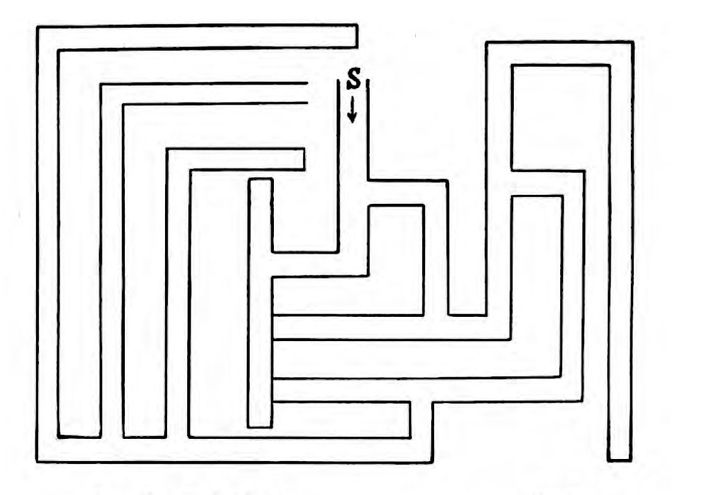 On the other hand: It doesn’t seem too hard, right? Not totally unfair? But here’s the catch: Wobbling your pencil and touching the borders will dock points, and moving toward a dead end will dock even more. Also, the test-taker is already convinced that you are less intelligent than he is, and is looking to prove this belief in a “scientific” way. Oh — and his tribe swept in a while ago and conquered your own.

That’s more or less what happened in real life. The Porteus Maze test, as it’s known, was administered throughout the world from the 1910s to the 1930s. It was created by an Australian psychology professor and used as a means of establishing the superiority of white Australians over their aboriginal counterparts.

That maze, and that dark story behind it, proves the point at the heart of Erik Linstrum’s Ruling Minds: Psychology in the British Empire: All too often we draw a clean, hard line between science and dogma, between reforming unjust structures and validating them. In reality, science is frequently used simply to justify preexisting belief systems and power relationships. And one of the clearest examples comes from how psychology was used by the British Empire in the early 20th century.

With hindsight, it’s easy to think of psychology in the first half of the 20th century as an art rather than a science, and its place of practice as the psychoanalyst’s recliner, with the patient exploring the nature of castration anxiety, rather than as a tool embraced by government and academia. But Ruling Minds takes the reader through the largely forgotten history of how Great Britain tried to improve the efficiency and effectiveness of its empire through the new “mind sciences,” a broad category that included personality and intelligence testing as well as the theories of Jung and Freud. From Uganda to India to Burma, government bureaucrats, academics, missionaries, and anthropologists used tests like Porteus’s to try to research, rationalize, and control the empire.

One such effort was undertaken by the anthropologist Charles Seligman, who tried to create a “global dream dictionary.” Seligman, a professor at the London School of Economics, worked with nearly two dozen missionaries and colonial officials to interview colonial subjects. This was no half-baked operation: He collected dreams from natives of Nigeria, Malaya, China, the Solomon Islands, Sudan, Uganda, India, and the Gold Coast. Many subjects had to be bribed with tobacco and rice — understandable since they were being asked to reveal intimate dreams to strange white bureaucrats from a foreign land. The task wasn’t made easier by the Freudian flavor of Seligman’s investigation. One of his employees, told to collect information on anal, oral, and genital behavior in children (like thumb-sucking) to supplement the dreams, wrote back, “It is dreary beyond words and unappetizing to apply anything like statistical methods to the execretory habits of the young, but I will do my best …”

This all sounds absurd, but it had real effects. At the time, natives in colonial holdings weren’t seen as having the deep inner life that psychoanalysis was supposed to plumb. As Linstrum puts it, “the myth of the ‘happy-go-lucky’ native, too simple-minded to experience depression or neurosis, was pervasive.” Sure, psychoanalysis made sense in the British salon, but not on the African plains. Seligman’s dream collection, as unscientific as it seems today, proved this wrong. Native people, it turned out, dreamed of sex, of dying, of falling — the same dreams as everyone else. Some were disturbing: One Ugandan chief dreamed over and over of being beaten by his British superior. These inner experiences led Seligman to say on the BBC, “The unconscious of all these races is qualitatively much the same” — a big deal at the time, puncturing as it did one of the myths of white supremacy.

The British government also applied the burgeoning science of psychology to the recruitment of Indian soldiers by introducing so-called “officer selection boards.” The British selection of soldiers in India had long been crudely racist, prizing Punjabi Muslims and Sikhs as supposedly “martial races” and shunning other ethnic groups. But the demands of World War II meant soldiers were desperately needed, so the Crown decided to implement boards of bureaucrats, psychologists, and psychiatrists to recruit and interview officer candidates. These applicants, if chosen, would then need to pass officer training.

This might sound pretty straightforward, but introducing psychological and personality testing into soldier recruitment was a real innovation at the time. Hubert Vinden, the British official who created these boards, introduced modern ideas like using standardized exams instead of the gut feelings of superiors. (One old test would check if a soldier “managed not to flinch when an inflated paper bag was burst behind his back.”) The idea was to weed out those likely to fail officer training, and ensure that unstable men didn’t make their way into the army. The local Indian press was enthusiastic about these changes, hoping that some fairness would finally be extended to Indian citizens.

Unfortunately, this modern vision hit some bumps. Only 27 percent of Indians selected via the boards ended up passing officer training, compared to over half of British candidates. Some of this was undoubtedly racism, but details of the process also bear the hallmarks of psychology’s failures in that era. The tests were standardized, but that didn’t mean the results weren’t completely and utterly subjective. For instance, in a “Thematic Apperception Test,” a recruit would see a picture — say, a woman turned away from a young man — and be told to write a story about it. If candidates wrote “stories about a mother objecting to her son’s decision to marry” that showed a worrisome sign of “parental dependence.” If they depicted “protagonists as passive victims of fate,” they were likely “an ineffectual person with little drive.” These kinds of interpretation were in vogue, but they probably weren’t much better at determining worthy candidates from lacking ones than the paper-bag test.

Vinden, the army official, comes across as as enlightened as anyone in the book. He believed strongly that the psychological makeups of British and Indian people were identical, and even hid religion and caste status from the interviewers to try to prevent bias. But this desire for fairness and cross-country comparability led him to import the same tests used in Britain. This meant the questions and directions were in English, applicants had to answer in English, and even the time requirements on word-association tests remained the same, despite the applicants speaking a non-native language.

This gets at the fundamental tension in Ruling Minds: As ridiculous as collecting dreams or submitting soldiers to Jungian word-association tests might sound, the men and women doing this work were trying to be reformers. They were often the only ones arguing, No, there’s no such thing as “martial races” and Yes, mental states really are identical in Africans and Europeans. But they were also working, formally or informally, for an empire that treated their subjects as subhuman. Out of that crooked timber, it was impossible for them to really be “fair” or just. There are very few heroes in these stories. Some were definite villains: Stanley Porteus, the maze creator, was a virulent racist and eugenicist who concocted reasons for why those Australian aborigines were outscoring British children at his test. Linstrum points out that even the most modern reformers thought that imperial rule was inevitable, and merely hoped to improve and humanize it. And the less-modern practitioners could drift into using psychology to buttress the regime, a kind of “Victorian paternalism updated with technocratic authority.”

And it’s not like these problems have passed. Academics and psychologists have always had, and always will have, a fraught relationship with governments that give them funding and influence. At worst, this can lead to the work psychologists have done supporting the torture of U.S. terror detainees. But it can also support research like the randomized controlled trials going on in developing countries to test programs like deworming or vaccination incentives, which have done much good. The history of this tension — between embracing science’s ability to improve people’s lives and being aware of its tendency to reinforce existing hierarchies — is a reminder that the line isn’t always so clear.