Joan Peckolick and daughter Thea, from “Mommy Only,” by Patricia Morrisroe, in the issue of June 6, 1983.

In her cover story, Rebecca Traister notes that more American women now are single than are married. That demographic shift was just getting started in 1983, when New York published “Mommy Only,” Patricia Morrisroe’s feature about women who had decided to have a child without a husband. Some were using the newish method of artificial insemination. Others had simply had a surprise pregnancy. Still others had a boyfriend, or a boy friend, who’d been called upon in the clutch. The terms “unwed mother” and “out of wedlock,” which seem loaded today, are used straightforwardly, and Morrisroe spends a chunk of the story talking to psychologists about whether the kids will end up okay.

What’s most striking, in retrospect, is that the women here are often in the position of either defending themselves or facing shame. One doctor openly calls single-by-choice childbearing “dehumanizing.” Several mothers spoke to Morrisroe under the condition that their identities be obscured. And consider this passage about one mother: “To complicate the situation, Ann worked for her father’s insurance company. ‘It must have been hard for him,’ she says. ‘I was eight months pregnant and going to meetings with clients and they’d say, “Ann, I didn’t know you were married?” I’m sure he cringed inside.’ ” (Also marking this as a period piece: Ann churns through ten cigarettes during the interview.) 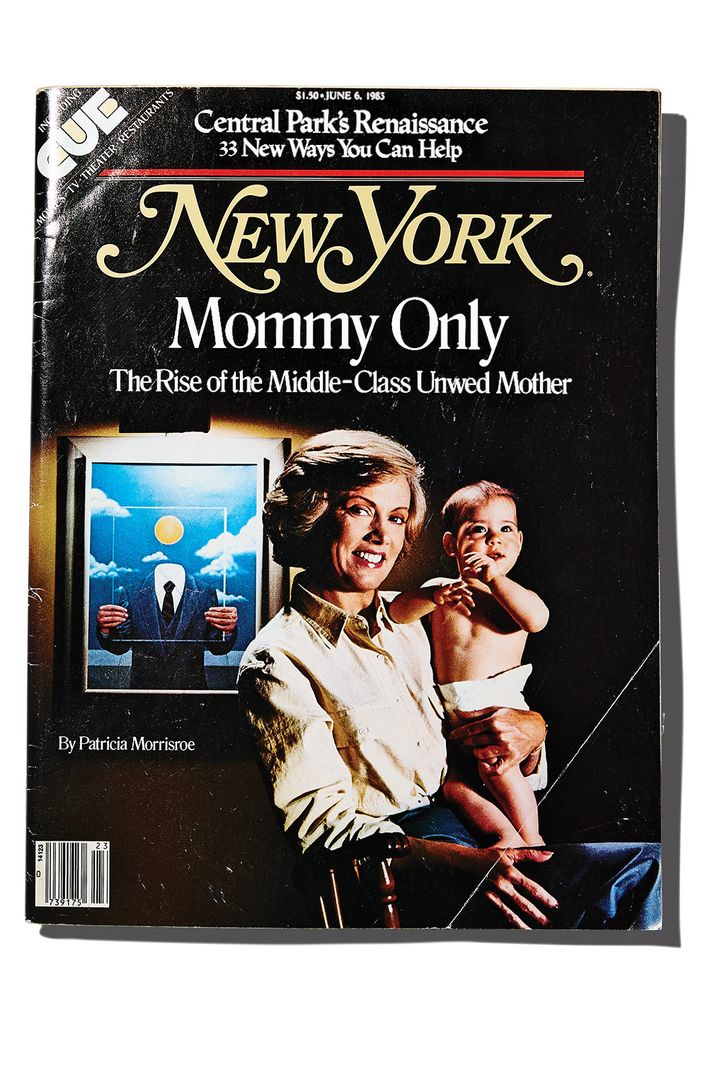 The Initial Response
When it was published, “people had very mixed reactions,” Morrisroe remembers today. “Some were very negative toward the women.” She says that her own concerns about them were mostly economic. Even the New York City of 1983 wasn’t cheap, and child care was tough. In the story, one of the mothers remarks: “If you make $100,000 a year and can afford a nanny, well, that’s terrific.” (She was a public-relations vice-president, and she was bringing in $40,000 at the time.) But, Morrisroe says, she found it remarkable — then and now — how moved these women were by the experience of childbirth and motherhood.

Joan Peckolick was one of those women, and she became the face of the story, appearing with her young daughter, Thea, in a full-page photo by Mary Ellen Mark. She does not recall the experience warmly. “The women,” she says, “were all portrayed the same way, without a man.” Peckolick, by contrast, had been involved with Thea’s father, and the little girl saw her dad regularly. “She was a love child, literally — she was born out of love,” Peckolick says now. Her letter to the magazine, published three weeks later, put it this way: “Your article implied that I am a ‘mommy only,’ which is simply not true … I, like many other single mothers and fathers, am trying to raise my child with a sense of fairness, dignity, and love values that your magazine failed to appreciate.” Certainly other readers did not: One letter offers that single-by-choice mothers “would have been better off with a pet”; another calls them “selfish, irresponsible, and inhuman.”

Today
“Irresponsible” is pretty far from the way Peckolick ended up. Today, she runs a nonprofit, called Self Chec, that implores adults to take better medical care of themselves. (She was inspired to start the group, she says, after Thea’s father died young in 1991, owing to a cancer that he could have caught early.) She talks about her daughter almost with awe: “a light,” she says.

Thea Samuelson was 4 then, and is 37 now. Although she was insulated from hard criticism, she says, “I can remember feeling a little different from the other kids, who would ask me, ‘When did your parents get a divorce?’ and I would tell them, ‘They were never married.’ ” Today, though, she is proud of her mother: “She made a conscious choice,” Thea says, “and she was definitely empowered,” noting that that word hardly existed at the time. She was too young in 1983 to read the story, but she does remember the photo shoot — “the feeling of the flower in my mouth.” Which, apparently, was pretty memorable, because she became an actress and a model, and has spent much of her life before the camera. “You get that first little taste of performing,” she says now, laughing, “and you don’t forget it.”

*This article appears in the February 22, 2016 issue of New York Magazine.

When Upscale ‘Unwed Mothers’ Were a New Trend