There’s something about the entire category of “parenting” writing that makes us all want to barf, or at least take a nap.

Though new parents usually need the help, parenting books often leave a lot to be desired: Some try too hard to be funny, while some have no sense of humor. Some are boring. Like books generally, most are simply bad.

But the truth is that there are amazing parenting books out there — you just need to know where to look. If you’re a parent yourself, you can waste a lot of time reading through shitty mom books before you find the few good ones. Here are ten books about taking care of babies (toddlers deserve their whole own shelf) that fit this bill, recommended by real mothers.

“This could also be called Care and Feeding of Babies and Oh Shit, What Now? The pages in our copy for head injuries, fevers, and poop are dog-eared. The tone is moderate and a good counterpoint to What to Expect and the Dr. Sears books: You should call the pediatrician if you’re panicked, but it’s probably fine.” —Maureen, mother of toddler twins

2. Be Prepared: A Practical Handbook for New Dads by Gary Greenberg and Jeannie Hayden

“Despite not being a dad, I thought this book was a delight because it’s just really readable, unlike most parenting books. You can breeze through it in under an hour. Its advice is really practical in a day-to-day sense. And it’s the only book I read that offered helpful ways to play with/engage your baby at every stage, which is something you think will come naturally but for me did not. There is also a hilarious illustration of what you think your newborn will look like and what he/she will actually look like.” —Amy, mother of a 3.5-year-old

“Making Babies is a wry, personal, and bracingly honest look at pregnancy and motherhood. It’s not a how-to manual, but more like a conversation over coffee with your chattiest friend.” —Alexis, mother of a 2-month-old

4. Our Babies, Ourselves: How Biology and Culture Shape the Way We Parent by Meredith F. Small

“My (then) childless friend gave this to me while I was pregnant and it’s easily the parenting book I’ve thought of most often since. A nice reminder that Americans are nuts, and that even though everyone else directly around you is doing something, everyone else in the world is probably doing something totally different.” —Sara, mother of three

5. Let’s Panic About Babies!: How to Endure and Possibly Triumph Over the Adorable Tyrant Who Will Ruin Your Body, Destroy Your Life, Liquefy Your Brain, and Finally Turn You Into a Worthwhile Human Being by Alice Bradley and Eden M. Kennedy

“This is a joke book, but it’s also a reminder to stop stressing and enjoy having a kid. It’s easy to be self-critical: This book basically says ‘get over yourself.’” —Darla, mother of a 6-month-old

“Nobody seems to talk about this book anymore, but it’s a classic for a reason: Because it’s so damn reassuring. The gist is that you probably know what you’re doing, so don’t freak out too much. It’s not great for specifics, but the general tone is good if you’re just trying to figure out what sort of creature your baby will turn into over the next few months.” —Izzy, mother of a 2.5-year-old

“I loved Baby 411 for two reasons. First, unlike a lot of other books that pushed a particular parenting style, it felt unbiased, and backed up its advice with scientific research. Second, it’s much more of a how-to manual (e.g., here’s how much food to give a 9-month-old), whereas many other books felt like a tour of developmental milestones (e.g., here’s when your baby will roll over). The latter is interesting, but not super-useful when you’re a first-time parent with no idea how to do anything.” —Deena, mother of a 5-year-old and a 2-year-old

8. Great With Child: Letters to a Young Mother, by Beth Ann Fennelly

“Great With Child is about what it’s like to be a parent: the emotional roller coaster, and the strange wonderful joys of simple things like watching a child figure out how to crawl, or form words. Beth Ann Fenelly is a poet, and she brings a poet’s voice to parenting — beautiful and clear and painfully honest about the hard stuff, like trying to figure out how to negotiate parenting with a partner, and dealing with miscarriage.” —Tamar, stepmom to an 8-year-old and a 10-month-old 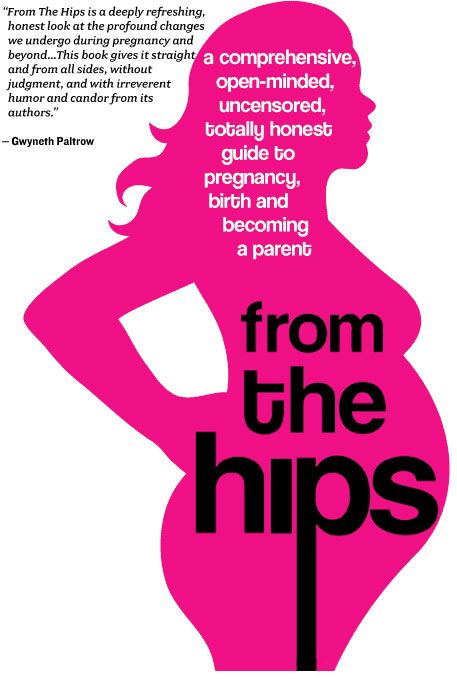 9. From the Hips: A Comprehensive, Open-Minded, Uncensored, Totally Honest Guide to Pregnancy, Birth, and Becoming a Parent, by Rebecca Odes and Ceridwen Morris

“My all-time very favorite is From The Hips by Ceridwen Morris and and Rebecca Odes — it’s the most open-minded, nonjudgmental guide to pregnancy and having a newborn, and it doesn’t make any assumptions about gender roles and money, which I appreciate a lot because even though I’m a mostly heterosexual woman who’s married to a man, I still chafe so much at the ones that are like, ‘Dad can help out with this part.’” —Emily, mother to a 9-month-old

10. Juggling Twins: The Best Tips, Tricks, and Strategies From Pregnancy to the Toddler Years by Meghan Regan-Loomis

“This was a good, light, and fast read when I was pregnant that helped me prepare for the logistical nightmare of having two squalling newborns at once. Before the babies arrived, I wrapped my mind around the fact that this was a systems problem. Simple systems could and did keep us sane.” —Maureen, mother of toddler twins

10 Books About Babies That Aren’t Awful