In the grand tradition of many men who came before him, Donald Trump likes to talk about penises. Specifically, his penis and just how large it is.

Thursday night’s Republican presidential debate made history when Donald, or “the D,” responded to Marco Rubio’s observation that although Trump is taller than him, he has very small hands. And you know what they say about men with small hands? (If not, ask Rubio.)

In an attempt to regain his title as Most Immature Republican Candidate, the D addressed this unfair rumor last night, saying:

“I have to say this: He hit my hands. No one has ever hit my hands. Look at those hands, are those small hands? And he referred to my hands as if, if they’re small, something else may be small. I guarantee to you there’s no problem, I guarantee!”

So glad he cleared up that up for us!

This is not the first time the D has spoken publicly about his member. And he’s not the only one. For years and years, his dong has captivated the public, for better or for worse. Here’s a map of Trump’s journey to the GOP nomination, told through a history of what matters most to him: his own penis.

She slipped her arms into the sleeves of the coat, turned again to look into the mirror, and thought how warm she would be in it next winter. “You are completely crazy,” she said, “to buy me a mink coat in June.”

“I didn’t mean to buy it. I just happened to be walking past a store on Fifty-seventh Street, and there it was in the window. I couldn’t resist.”

“You do never resist.”

“Not you,” he said, turning her around to face him, slipping his arms under the coat and around her bare waist … He took a nipple between his lips, flicked it with his tongue, and felt Katrinka’s arms tighten around his neck, her body arch in pleasure. In a moment, they were on the floor, on top of the mink coat, Katrinka’s legs gripping his waist as he moved deeper and deeper into her. Finally, after a long time, they finished and lay quiet, each one trying to come to terms with the depth of feeling the other inspired, so much stronger, more compelling than anything either had experienced with other lovers, sometimes bewildering in its intensity, producing alternately joy and terror.

As Adam pulled away from her, his cock fell for a moment into the valley between her legs, leaving a smear of semen on the dark silk. He smiled with satisfaction. “Now you have to keep the coat,” he said.

Donald — sorry, “Adam” — quite literally got spunk on the mink.

His divorce with Marla is finalized a year and a half later.

September, 2004: Trump reveals to Howard Stern that he’s not the biggest fan of oral. A true blessing for Melania.

April 3, 2012: Donald finds himself embroiled in yet another scandal. One of the Miss Universe contestants, Jenna Talackova, is trans. Because he’s a bigot, Trump doesn’t want her to compete. On the matter, superstar attorney Gloria Allred says, “[Jenna] didn’t ask Mr. Trump to prove he’s a naturally born man, or see photos of his birth, or to view his anatomy. It made no difference to her.”

“I think Gloria would be very, very impressed with [my penis].”

The first known time Trump publicly discusses the size of his own penis. 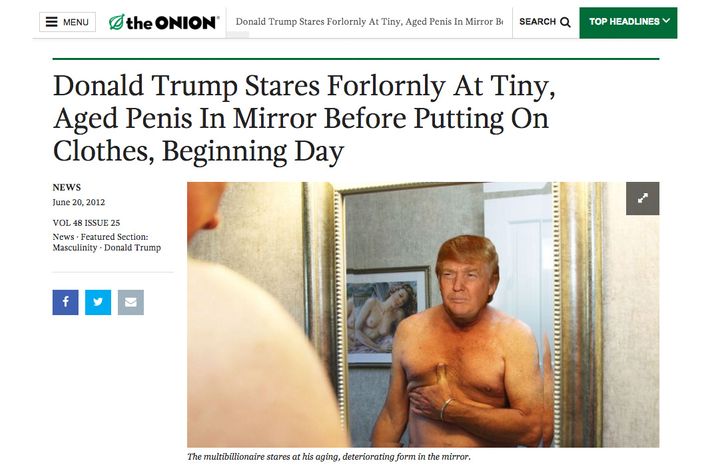 July 30, 2015: It’s July 2015. Rick Perry is still in the presidential race. God, it feels like forever ago. The country is feeling less doomed. We’re still in denial, whispering sweet nothings like “Trump will never be president” to our loved ones.

When a reporter asks Rick Perry what he thinks of Trump asserting Perry’s weakness, Perry suggestively challenges Trump to a contest of strength. He drawls, “Let’s get a pull-up bar out there and see who does more pull-ups.”

In other words, a dick-measuring contest.

January 3, 2016: Breaking news! Boing Boing bring to light another rendering of Trump as a dick.

If this captivates you as much as it captivates our (formerly) great nation and you have a couple grand to spare, you can bid on it here.

Today: And that brings us to present day. Last night ol’ D assured us that his manhood was hefty, and oh boy! did the nation react:

Marco and Trump are the Ross and Rachel of the Republican Party. They may bicker, but the sexual tension is ELECTRIC. #GOPDebate

We look forward to updating this timeline as election season progresses.