Generally speaking, sweepingly pessimistic statements about society should be taken with a grain of salt. When someone claims pop music is getting much dumber, or college kids are much more prone to mental illness, odds are pretty good the claim in question is a bit overblown. Overall, we’re often more attuned to the negative stories and anecdotes than positive ones, meaning that news coverage of terrible events, for example, can cause us to develop a distorted view of things.

Sometimes, though, there are exceptions. And an interesting, under-discussed one involves young people and mental health. In short: Ever since the 1930s, young people in America have reported feeling increasingly anxious and depressed. And no one knows exactly why.
One of the researchers who has done the most work on this subject is Dr. Jean Twenge, a social psychologist at San Diego State University who is the author of Generation Me: Why Today’s Young Americans Are More Confident, Assertive, Entitled—and More Miserable Than Ever Before. She’s published a handful of articles on this trajectory, and the underlying story, she thinks, is a rather negative one. “I think the research tells us that modern life is not good for mental health,” she said.

A key thing to understand before diving into her argument is that there are important methodological obstacles to accurately gauging how the prevalence of anxiety and depression wax and wane over time. The words “depression” and “anxiety” themselves, after all, mean very different things to someone asked about them in 1935 as compared to 1995, so surveys that invoke these concepts directly only have limited utility for longitudinal study. To get around this, Twenge prefers to rely on surveys and inventories in which respondents are asked about specific symptoms which are frequently correlated with anxiety and depression (she said that there’s a lot of symptomological overlap between the two). Questions like “Do you have trouble falling asleep?” mean similar things in 1935 as compared to 1995.

Much of the richest data on this question, then, comes from the Minnesota Multiphasic Personality Inventory (MMPI), which has been administered to high school and college students since the 1930s — and which includes many questions about symptoms. Specifically, it asks — among many other things — whether respondents feel well-rested when they wake up, whether they have trouble thinking, and whether they have experienced dizzy spells, headaches, shortness of breath, a racing heart, and so on.

When you look at MMPI questions over time, as a team led by Twenge did in a 2009 paper in Clinical Psychology Review (PDF), there’s a clear increase in symptoms associated with depression and anxiety. In these graphs, for example, each dot represents a study conducted using the MMPI: 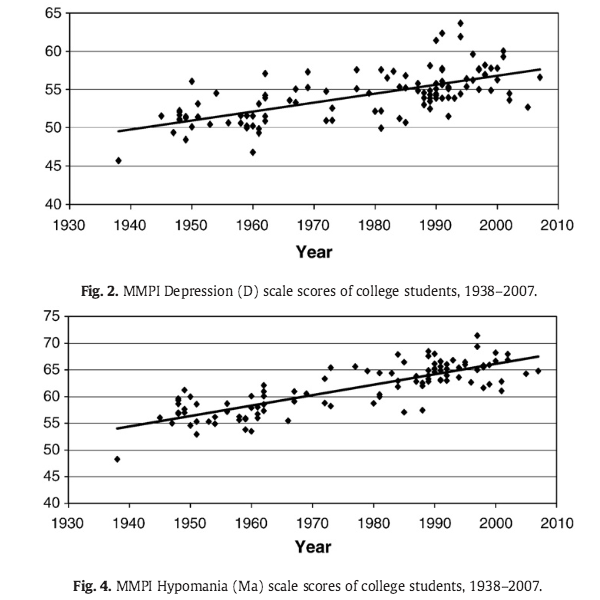 The trendlines are obvious: Asked the same questions at about the same points in their lives, Americans are, over time, experiencing worse and worse symptoms associated with anxiety and depression.

When you examine certain other data, though, there’s an interesting recent wrinkle to this trajectory. In a paper published in 2014 in Social Indicators Research, Twenge tracked the results of the Monitoring the Future (MtF) survey, “a nationally representative sample of U.S. 12th graders [administered] every year since 1976,” between 1982 and 2013. Like the MMPI, the MtF asks students about symptoms in a manner that should be generally resistant to cultural change: The somatic items Twenge examined asked about trouble sleeping, remembering things, thinking/concentrating, and learning, as well as shortness of breath. An interesting recent pattern emerged on these measures: 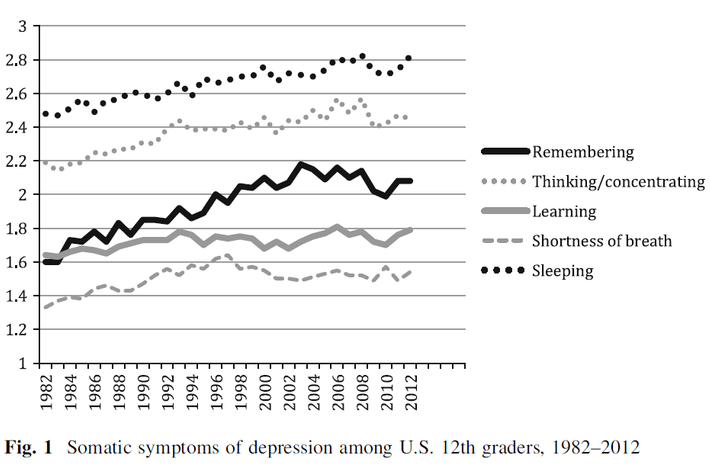 All the items end up significantly higher than where they started, but for many of them most of the increase happens over the first half of the time period in question. From the late 1990s or so until 2013, many of the items bounce around a bit but ultimately remain flat, or flat-ish.

Why have these symptoms appeared to plateau? “It’s hard to prove causation in over-time schedules, said Twenge, “but SSRIs came on the market in the early 1990s, and that’s exactly when these things started to plateau.” These drugs — Prozac and Lexapro, among others — have been prescribed to millions of people who experience these symptoms, many of whom presumably saw some improvement once the drugs kicked in, so this explanation at least makes intuitive sense.

The Myth of the Ever-More-Fragile College Student
Is There Any Evidence Trigger Warnings Are Actually a Big Deal?

But there are likely other factors leading to the plateau as well, said Twenge. For one thing, the “crime rate is lower [today] than it was when it peaked in the early 1990s,” and dealing with crime can lead to anxiety and depression symptoms. Other indicators of youth well-being, like teen pregnancy, were also significantly higher back then, and could have accounted for the trajectory visible on the graphs.“For whatever reason,” said Twenge, “if you look at what was going on back then, the early 1990s were not a good time, particularly for young people.”

But what of the longer trajectory, which mostly is a straightforward upswing since the 1930s? If those data are right and young Americans have gotten progressively more anxious and depressed, what could be accounting for this?

When Twenge attributes this worsening to “modern life,” she has certain specific features of it in mind. “Obviously there’s a lot of good things about societal and technological progress,” she said, “and in a lot of ways our lives are much easier than, say, our grandparents’ or great-grandparents’ lives. But there’s a paradox here that we seem to have so much ease and relative economic prosperity compared to previous centuries, yet there’s this dissatisfaction, there’s this unhappiness, there are these mental health issues in terms of depression and anxiety.”

She thinks the primary problem is that “modern life doesn’t give us as many opportunities to spend time with people and connect with them, at least in person, compared to, say, 80 years ago or 100 years ago. Families are smaller, the divorce rate is higher, people get married much later in life.” Smaller families and later marriage, of course, in part reflect societal advancement most of us would view as positive — people, particularly women, have a lot more autonomy over relationships and reproduction. Twenge wanted to be clear that she is for all these different types of societal progress, and that the period when people reported fewer depression and anxiety symptoms was also one where there was widespread racial and gender-based discrimination. She just also thinks we should be “clear-eyed” about the fact that the the “potential tradeoff for our equality and freedom is more anxiety and depression because we’re more isolated.”

In other words, it may simply be the case that many people who lived in less equal, more “traditional” times were forced into close companionship with a lot of other people, and that this shielded them from certain psychological problems, whatever else was going on in their lives.“I often think about my grandmother on my mother’s side, who ran a farm in rural Minnesota with my grandfather,” said Twenge. “They had seven children, and they had to get up at five o’clock every day to milk the cows. My uncle tells me stories about her pushing a plow and stopping to barf because she was pregnant so many times.” It was a tough life, in other words, but: “She was always surrounded by people — not just her immediate family, but she had extended families, brothers and sisters, living in the farms around her. She was virtually never alone — and that can be a bad thing, clearly, but from a mental health perspective being surrounded by people is a good thing.”

For whatever reason, the shift away from this sort of life has also brought with it a shift in values, and Twenge thinks that this, too, can account for the increase in anxiety and depression. “There’s clear evidence that the focus on money, fame, and image has gone up,” she said, referring to various surveys that have been conducted over the decades in which young people are asked about their goals and values, “and there’s also clear evidence that people who focus on money, fame, and image are more likely to be depressed and anxious.” (She cites evidence for this sort of long-term attitude change in a bunch of her work, including in a helpful short article she wrote for the American Journal of Orthopsychiatry).

Despite all these negative trajectories, Twenge herself isn’t a hardened pessimist. “It’s so tempting to say the world is going to hell in a handbasket and everything’s bad, but there are so many good things about modern life,” she said. So maybe the key message here is that while there’s no way to go back to family farms and young marriage and parenthood — and, from an equality standpoint,we wouldn’t want to anyway — modern life needs to do a better job of connecting people to one another, and encouraging them to adopt the sorts of goals and outlooks that will make them happy.

Anxiety and Depression Are on an 80-Year Upswing