Smitten with Lars, I asked him out for a drink. Uncouth, I know, a woman making the first move. He was a European hunk of sorts, and I couldn’t let this opportunity slip through my fingers. Lars spoke softly, with deep-set blue eyes and penchant for fine furs and the opera. He was taller than me. I liked that.

“Why would we get a drink?” He responded. “When we can fly to Paris and dine on top of the Louvre?”

My heart raced with excitement.

As soon as his private jet took off, Lars fell into the deepest of slumbers. As he softly snored — or really, it was a gentle purring — all my deepest insecurities, insecurities I’d worked hard to push to the depths of my soul, began to surface.

The central question that haunted me: Is This a Date? 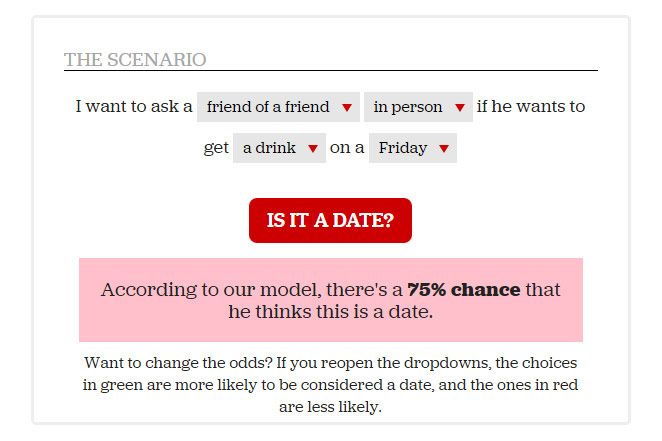 Suddenly I remembered: There’s an online quiz that can guide me. And no, it’s not some personality quiz. Instead, it is science. I’d like to think Lars would like that. You know, science.

Even though Lars suggested we go to Paris, I was the one who initially asked him out. So I better double-check things. After typing in some basic information: my age, how I knew Lars — we’re members of the same elite day spa — and the way in which I asked him out, I pushed the button, simultaneously anxious for the results and amazed at how wonderful the Wi-Fi on Lars’s private jet was:

Presented with my answer — a 75 percent chance is pretty good — I bashfully cuddled up to Lars.

He slowly opened his eyes, a little dazed from his slumber, turned to me and said: “What the hell are you doing? I have a girlfriend!”

nyfw spring 2021 6 mins ago
4 Things We Learned at Pandemic Fashion Week For one thing, ’shrooms might be the answer to all of our problems.
nyfw spring 2021 11 mins ago
Khaite Confronts the Shifting Moods of the Time The overall impression was quite sober.
By Cathy Horyn
real housewives of new york 4:40 p.m.
Is RHONY Finally Adding a Black Housewife? Bershan Shaw, a motivational speaker and restauranteur, is rumored to be the latest addition to the very white cast.
skin deep 4:12 p.m.
Black Lives Matter Has Prompted a Reckoning in India’s Beauty Industry In recent months, skin-lightening creams have faced increasing backlash.
natural disasters 4:05 p.m.
We Already Ran Out of Hurricane Names for 2020 After running through all of the preapproved storm names, meteorologists are now using the Greek alphabet, which has only happened once before.
tiktok 3:57 p.m.
Wait, Is TikTok Actually Going to Be Banned? The Trump administration is moving to ban TikTok, unless a “very American” company buys it. Here’s where things stand now.
on the rise 3:12 p.m.
The Fashion Designer Who Makes Tops Out of Paper Karina Sharif wants to tell Black women’s stories through her clothes.
By Devine Blacksher
sex diaries 2:00 p.m.
The Student Whose Boyfriend Thinks She’s Monogamous Welcome to Sex Diaries week.
hmmm 1:16 p.m.
This Is by Far Martha Stewart’s Most Deranged Home Advice Why does she keep insisting that we should all bathe our cats?
action items 12:58 p.m.
13 Down-Ballot Races You Should Be Excited About From New York to Texas, here are the progressive candidates to watch.
By Bridget Read
nyfw spring 2021 12:13 p.m.
What It Feels Like to Be at a Fashion Show Right Now Christian Siriano showed a dreamy, Wizard of Oz–inspired collection at his Connecticut home.
crime 12:08 p.m.
Jerry From Cheer Arrested on Child-Pornography Charges The arrest follows allegations from two twin boys who say the Cheer star solicited sex and nude pictures from them.
my two cents 12:00 p.m.
3 Women on Life After Losing Their Jobs “I wake up every morning and I’m like, Okay, what can I get paid for today?”
By Charlotte Cowles
friday sales 10:51 a.m.
25 Things on Sale You’ll Actually Want to Buy: From Staub to Good American Including a fuzzy Patagonia fleece for humans and a fuzzy fleece bed for dogs.
fantasies 10:48 a.m.
Brad, Stop Toying With Us Once again he has wrought emotional chaos, this time by openly flirting with Jennifer Aniston over Zoom.
power 9:50 a.m.
What Is Going on at The Ellen DeGeneres Show? Three top producers accused of sexual harassment and abuse have been terminated.
hot bod 8:00 a.m.
Slouching Toward Six Months of Bad Posture Just give me a reason to stand up straight.
By Maggie Lange
power Yesterday at 10:00 p.m.
Trump Says Teaching Kids About System Racism Is ‘Child Abuse’ The president’s new 1776 Commission will purportedly promote “patriotic education.”
sex diaries Yesterday at 8:00 p.m.
The Ethically Nonmonogamous Woman Sick of Virtual Playdates Welcome to Sex Diaries week.
nyfw spring 2021 Yesterday at 7:05 p.m.
Tom Ford Gets Vulnerable The master showman offers a peek behind the curtain.
By Cathy Horyn
More Stories